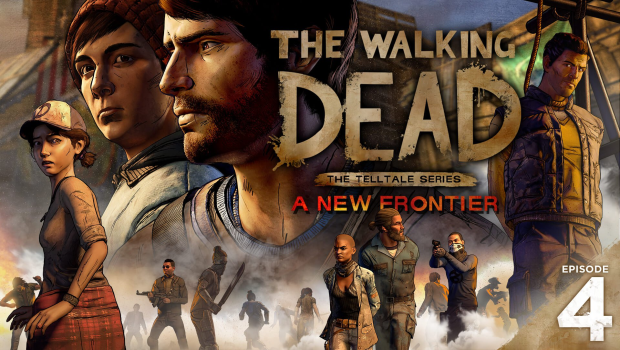 Slight spoilers for episode one through three are included

While the Walking Dead – A New Frontier has, for the most part, been a very refreshing and enjoyable new direction for the series, there were a few missteps that have been dragging it down since episode one. Episode four – Thicker Than Water doesn’t improve on any of the season’s main flaws such as the lack of puzzles or forcing relationships,  but delivers in many of the game’s other areas.

Staying true to form, episode four starts off with a flashback into Javi’s past. While the series has had scenes set before the time of zombies, most feel boxed in and don’t give you a real look at the outside world; they weren’t too humanizing and felt a bit sterile. Seeing children playing and hearing people talk about using things such as Ebay made this opening feel much more grounded and provided a brighter view of the world than we usually get to see; this made the opening feel very fresh and special.

The episode also delivers on the other flashback segment that we get with each installment, which revolve around Clementine’s life between seasons two and three. While these flashbacks still seem largely unnecessary, aside from the one in episode three, the segment was actually enjoyable to play and felt less like the typical scene of tragedy in Clementine’s life within the interim. While I understand the need for Javi’s flashbacks, and enjoyed this one of Clementine, the ones that don’t involve the New Frontier still feel more like filler that could have been done in one larger segment rather than smaller ones. They really bog down the pace of the story, and they could have been restructured differently.

Thicker Than Water doesn’t improve on the lack of puzzles this season, and doesn’t really contain anything that deserves to be called a puzzle in it at all. It looks as though this isn’t going to change anytime soon as Telltale appears to be going in a different more story-based direction with the series. While this made the earlier episodes feel lacking, after playing through the first three, this doesn’t feel like a terrible problem. If you are enjoying the season so far you probably won’t mind the aspect’s absence.

However, the major setback that plagues the fourth episode is the very drastic and often confusing dialogue and attitude changes that many of the characters begin to undergo. The conversations you have with Tripp and Gabe, in particular, seem to spin out of control without giving you any way to change the outcome. One minute you will be having a nice conversation and have your relationships with these characters firmly under control, and then the game will rapidly change characters’ attitudes to fit the forced story that it is trying to play out. This really degrades the play-your-way concept that is supposed to be the core mechanic of the series, and makes it feel like no matter what you do, the game is going to make the important decisions without you.

Continuing the same problem that the last episode had, forcing a relationship between Javi and Kate even if you don’t pursue one, episode 4 awkwardly throws you into a best friend position with Tripp. This felt extremely unnecessary and unjustified, as while I had been friendly with Tripp, the level of closeness that some of the conversations imply seem unrealistic given the small amount of time that the characters have known each other.

While the choices that the game doesn’t give you seem to be holding Thicker Than Water back, the ones it does give to you feel extremely important and can be very difficult to make. There were a few moments that I went back to play, just to make sure that the game wasn’t pulling a fast one on me and that the events wouldn’t play out practically the same either way; fortunately, they did not. Each choice changed key plot points dramatically and look like they will drastically change the game going into the final episode of the season.

Some parts of the episode can feel a little boring, but are necessary to advance the episode to its climax, and it is a great one. Full of tension and hard choices, the last twenty minutes of this episode are action-packed and contain some of the most exciting thrills that I have ever seen from the series. Most of the time after playing an episode of The Walking Dead, I know what to expect going forward, but after finishing Thicker Than Water, I legitimately have no idea what is going to happen in the season finale, which is exciting and has me anticipating the next episode more than I have since the end of season one.

Many of the season’s problems remain in episode four - Thicker Than Water, but this installment does improve on many of its storytelling segments. There are still problems regarding relationships that you might not want, but the choices that you do get to make feel more important than they have in a while. While devoid of puzzles, the incredible ending has me eagerly waiting for the final episode.