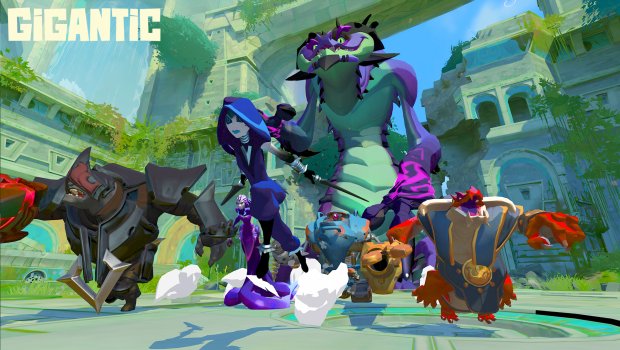 Over the past few years, I have found my interest in multiplayer games steadily dissipating. There seemed to have been a lack of interesting and original multiplayer games coming out and nothing was able to grab my attention. Even some of my favorite games to play with friends, such as Halo and Smite, lost some of their allure and eventually I stopped playing them altogether. While Overwatch definitely took great strides in fueling my passion for multiplayer games, it wasn’t until I played Gigantic that I truly felt a new love for them.

Gigantic is described as a strategic hero shooter by developer Motiga, and while that doesn’t seem like an actual genre, it does a good job of defining the very unique style of gameplay that Gigantic has. Nestled somewhere between a traditional MOBA game and action games, Gigantic is an intense fight to claim power for your guardian that brings enough new ideas to the table to feel fresh, while taking just enough from other genres for players to easily get a feel for the game after only a few matches. The goal of each match is to power your guardian up enough so that they will attack the enemy’s guardian, leaving it vulnerable to your team’s attacks for short time. Players are able to gain power from killing enemies and creatures, as well as from collecting power from certain positions on the map. The Power Race, as Motiga call it, is an excellent mechanic that keeps Gigantic at an enjoyable and unrelenting pace throughout.

My rival is down. Strike its heart now.

The clash heavily affects a match’s outcome and I have seen many games won and lost at this crucial stage of the game; this aspect keeps every match entertaining and competitive to the very end. The clash is a point in each match where the map changes and the guardians move closer together, making it easier to get in and deliver wounds to the enemy team’s guardian. While in the clash, I have seen teams that have been completely obliterated up until that point group up and steal what was a definite victory for the other team. This allows for players to stay committed to match that isn’t going their way for much longer as you can always pull of a win in the clash if your team can work together. While the leading team will still have a hefty advantage, the change of position in the clash offers losing teams a new chance to find an area to make their stand and change up their strategy.

What I love about Gigantic is the team play aspect that it has. It is simply impossible to play the game as a lone wolf and any player looking to do so will most likely find themselves costing their team the win. You can play as one of the game’s assassin characters with whom you can poke at creatures and single out opponents, but prolonged separations from your team can leave them weak during full team fights. Cross-play in Gigantic is something that I didn’t think I would care about nearly as much as I do, but its inclusion has immensely elevated the game by allowing me, as a PC player, to play with my friends that don’t want to spend a ton of money building their own PC. Gigantic is the perfect title for cross play because there doesn’t seem to be a distinct advantage to the players on PC due to its flow and style of gameplay, which is always something that people worry about.

The over the top hero’s and art style really separate Gigantic from other multiplayer games. While you still get the feel of an Overwatch-like experience with its bright colors and characters, the way Motiga has designed the characters in Gigantic is fantastical and new. The hero design in particular is an area where Gigantic shines. The games crazy cast is so diverse and colorful that any player can find something to like. From a sniper or a mage to a scientist or a frog there is simply no limit to the character types that can show up in Gigantic. While all of these characters could seem out of place all thrown together, the beautiful world that Motiga has created makes them all fit together perfectly. This is due to the whimsical and cartoon-like art style that Motiga has gorgeously crafted.

While the Gigantic might be awesome to look at, it can be quite difficult and a tad confusing to get into for new players. However, if you make it through a few matches what you need to do in order to win becomes clear. With the introduction of bot matches, Motiga has made it even easier to learn the ropes of Gigantic in a safe and ridicule-free environment. This makes Gigantic far easier to pick up than a traditional MOBA, as they can be a little bit inaccessible for players that haven’t played the genre before.

Gigantic doesn’t have any items like a traditional MOBA and I think this is a key element in it individualism. I always found choosing which items to buy to be difficult and bothersome, especially with a new character. In Gigantic on the other hand, the way you upgrade your character is through skill upgrades which are very easy to grasp while still being diverse enough to change how a character plays to counter your opponents. Gigantic furthers itself even more from MOBAs with the exclusion of creeps and lanes, and rather opts for creatures which aid you in holding certain positions, and includes no lanes whatsoever. This makes the game much more action-shooter based and removes any responsibility for defending an area on your own, giving players greater freedom to escape fights without sabotaging their team in the process.

If there was one thing that annoyed me to no end during my time playing Gigantic, it would be running into a team that has a lot of ranged heroes. When a team has an overwhelming amount of range it can be quite hard to take certain areas of the map and teams can find themselves constantly pushing an area without gaining any ground. the staircase on the Sanctum Falls clash area for instance is extremely hard to push when the other team has multiple ranged heroes, who essentially just have to aim up or down the stairs. While more experienced players will know the tactics to counter this, it is an aspect of the game that I can find frustrating for new players.

I would also like to have the ability to redistribute at least one skill point per match, by sacrificing an Ult or something of that nature. Too many times I have selected the wrong upgrade leaving me with an incorrect build and no options to fix it, which can really devastate a team’s dynamic and leave it at a disadvantage. This ability would be especially beneficial when trying out new character for the first time as you would be able to try more than one build during a match. While I can understand Motiga’s decision to lock your choices in, I would be able to accept it more if players were able to see full skill trees from the Gigantic’s hero menu rather than just the initial skills themselves as this would allow players to plan out their builds before jumping into what can be a very hectic fight.

Motiga have created a fast paced and intense game that MOBA and shooter fans will both be able to sink their teeth into. An Incredible art style mixed with fantastic hero designs makes Gigantic stand out from the crowd and offers limitless possibilities. The few problems the Gigantic has are eclipsed by the sheer fun that that it is to play and I don't see myself dropping this game anytime soon.

Zach has been a gamer ever since he picked up a PS1 controller and played Asteroids for the first time. From FPS games to Point-and-click adventures, Zach knows no genre that he can't get into. When not playing games, he spends his time looking at the newest computer components on the market and dreaming of a day when he can buy them.
Related Articles: Gigantic
Share
Tweet
Share
Submit