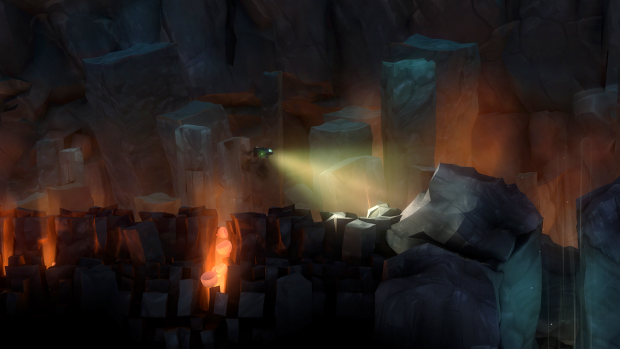 When Wii U launched in 2012 it came with promises of unique gameplay experiences that could only be found on Nintendo’s latest console.  The GamePad was meant to revolutionize the way that gamers played by utilizing an engaging second screen experience.  Fast forward three years and, while there are definitely games that make great use of the unique controller, there are few games that truly manage to capitalize on it.  It’s not that games like Mario Kart 8 or The Legend of Zelda: Wind Waker HD don’t have interesting uses for the GamePad, it’s just that Wii U games always feel like they use it as an afterthought rather than building a game entirely around it.  That is, until now.

Affordable Space Adventures from Knapnok Games is the first Wii U game I’ve ever played that manages to nail what the console is all about.  Everything from the two-screen experience to the touch input is integrated into the core of the game, and it makes for quite a fun experience.

Players are cast in the role of tourist thrill-seekers who want to experience what outer space has to offer on a budget.  Through the help of a company known as Uexplore, players control their spaceship on a planetary guided tour of sorts until they found themselves stranded.  The game then tasks players with repairing their ship and using its resources to safely find rescue.

The story is pretty much your basic fare, but it mostly just serves as a backdrop to the otherwise excellent sci-fi adventure theme.  In fact, the presentation is incredibly charming all around.  This starts right from the beginning as players are shown an opening cinematic that serves as both a brief tutorial and an instructional safety video of sorts.  This theme continues throughout the game as every menu and loading screen manages to convey the element of space exploration, showing images of blueprints and freeze-dried food, all the while reminiscient of a campy sci-fi flick.  These loading screens are unfortunately a tad long (and occasionally lead to even more loading screens), but when the theme is presented in such a fun way, it’s hardly a problem.

This theme translates smoothly into the game’s visuals as well.  As players continue to explore, each level excellently conveys a sense of unknown adventure into the mysteries of space.  The atmosphere of the planet is presented wonderfully through a thick layer of fog that gives the game an incredibly atmospheric vibe.  With space junk strewn about and the occasional dim light in the distance, an immersive feeling of wonder is often felt.  Rarely does a game do such a fantastic job of conveying presentation, but Affordable Space Adventures goes above and beyond.

Where the game really shines, though, is in its aforementioned use of the Wii U GamePad.  As players control the movement of the spaceship on the television screen, the GamePad gets used like a control panel.  Acting as though it were an on-board control system in the cockpit of the ship, players can interact with the GamePad to monitor and change many of the ships resources.  Equipment such as thrusters, scanners and anti-gravity are all controlled using inputs displayed on the touch screen.  Changing the usage of each of these controls is as simple as moving a slider and doing it all on the Wii U makes for an engaging experience.

The management of the ship’s resources is how the majority of the game’s puzzles are solved too.  Although the planet is mostly uninhabited, players will occasionally encounter robots that will shoot down your ship if detected.  Using the ship’s scanners will display just how much sound, heat, and electricity will alert the mechanical enemies to your presence.  It’s up to players to progress by maintaining a proper balance of these three outputs in each level to stealthily navigate past danger.  If any of your resources are too high, it’ll mean game over, sending players back to a previous checkpoint.

Restarting checkpoints will happen quite frequently as well.  Navigating past some of the dangers present here requires some masterful problem solving skills.  The puzzles on display are fiendishly clever, sometimes even frustratingly so.  Some of these puzzles can be solved by finding just the right sweet spot that will make your ship have the right balance of resources to evade danger, but others require you to think outside the box entirely.  In one particular area involving a narrow vertical corridor filled with robots, no combination of control outputs would sneak me by enemies successfully, so an alternative solution was needed.  This required me to shut off my engine, halting all heat and electricity output and sending the ship into freefall, only for me to engage the engine again right before impacting on the ground.  These solutions are brilliant, but it often takes a lot of trial and error before a suitable solution can be found.  This means that there are plenty of truly rewarding “aha!” moments, but they are unfortunately coupled with just as many moments of frustration.

Content-wise, the game is on the shorter side.  My playthrough managed to clock in at about five hours total, although that can vary depending on how quickly a player is able to solve each puzzle.  The game’s linear nature and lack of any sort of collectables leaves little reason to return after it has been completed.

There is a local co-op mode that can give players the chance to team up to solve the puzzles as well.  A second or third player can pick up a Wii Remote or Pro controller and take control of the ship’s lights, scanner and steering, but this co-op mode is essentially just a way of splitting all of the controls from the GamePad amongst all players.  It’s fun, but won’t provide any fresh reason to return to an already completed level.

Affordable Space Adventures’ flaws don’t take away from what the game sets out to achieve, though.  The puzzles may be a mixed bag and the game is mostly a one-and-done affair, but there has never been a game to master the Wii U GamePad like this.  Atmospheric, charming, and with a great presentation, Affordable Space Adventures might fall short in a few areas, but what it does right, it absolutely nails.

Affordable Space Adventures is a great example of a game that takes advantage of everything Wii U has to offer. There are a few drawbacks but this is the best use of the GamePad to date.

Gaming Trend's resident amiibo collector, Matt's a lifelong gamer with a soft spot for Nintendo. As a new father, Matt often struggles to stay as involved as he has been in years past but can always be counted on to come back for some engaging geeky conversations. A resident of Philadelphia, he is currently working on building up his Man Cave with all things Marvel, Star Wars, and Video Games. As an old-school gamer, Matt firmly stands by his belief that gameplay will always be more appealing than story.
Related Articles: Affordable Space Adventures
Share
Tweet
Share
Submit