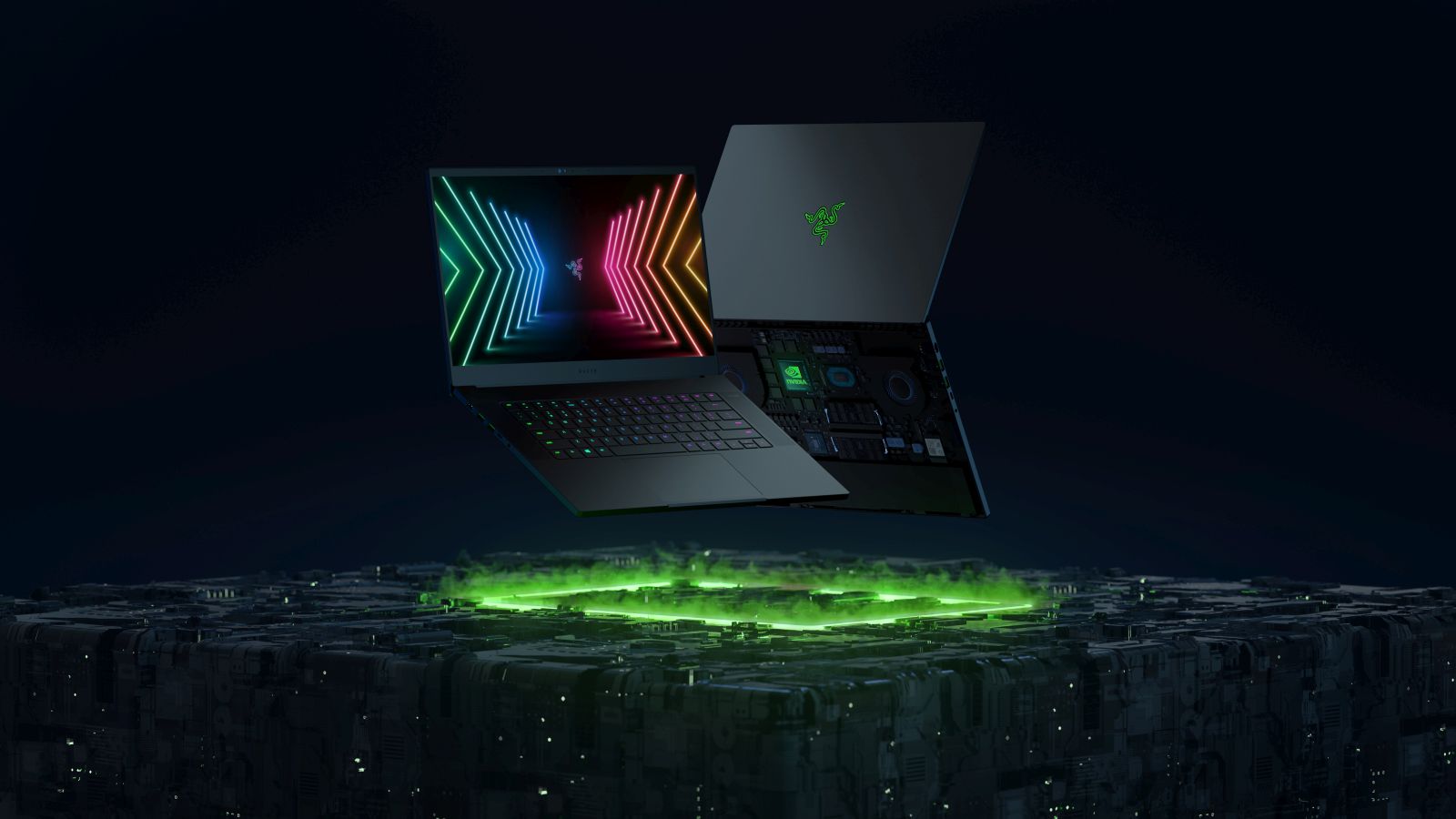 2021 may have just begun, but don’t think the Razer team has been sitting on their hands. In fact, at CES 2021 they’ve announced a complete overhaul of their Razer Blade line and two aspirational, forward-looking Concept Projects. What’s awesome, however, is that one of them is almost ready to ship. Let’s dig into what’s new for Razer in 2021.

As the Razer Blade laptop line enters its 10th year, it’s only natural that the Razer Blade 15 and 17 get an overhaul. We reviewed the Razer Blade 15 (2020) model, noting that Razer crammed a ton of power into an incredibly slim laptop, offering a metric ton of speed at a reasonable price. That said, we did also point out that 16GB of memory and just 1 TB of storage without a secondary slot was a head-scratcher. Well, they listened.

Razer Blade 15 Base and Advanced

The first thing the team tackled was a total overhaul of the display panels. The base model now ships with a 144Hz 1080p display with an 8ms refresh rate and a 100% sRGB coverage for color. Naturally, there is also an Advanced model, and that’s where things get really interesting.

The Razer Blade 15 Advanced comes with two options, a blisteringly fast 360Hz 2ms panel at 1080p, or a 240Hz 2.5ms panel at 1440p resolution. The 240Hz panel also comes with G-Sync support, and Advanced Optimus support to maximize the balance between performance and battery life. This is a fairly huge jump for line, making it great for anything from watching movies to playing high-speed games like Valorant or Rocket League.

If you are looking for a 4K option, you’ll be glad to see a completely new 4K OLED AMOLED with 100% DCI-P3 color gamut. That’s pretty fantastic, but surprisingly it’s also a touch panel armored with Gorilla Glass, supports HDR, and has a 1ms response time.

All of these screen options come sporting a 4.9mm bezel, a 6500K white point, and are all individually calibrated and tested before leaving the factory.

All of this gorgeous screen real estate needs something to power it, and the Razer Blade 15 will ship with two options for processors — an Intel 10th Gen 10750 with 8 cores and 12 threads in the base model, and a 10875 8 core model with 16 threads in the Advanced version. Both of these run at just 45W, leaving plenty of power on the table to flux using the Optimus settings for the Advanced model, and not chewing up the battery while on the go.

Storage and Memory constraints were a challenge for the 2020 model, but that’s not the case any longer. Both 2021 Razer Blade models now sport dual storage. It does this in a stacked m.2 configuration with one device separated by the other by a thermal pad to manage heat. The system sports 1TB of PCIe SSD power as a standard configuration, with the second slot being open. At launch, this opens up 4TB of storage space — more than enough to store a ton of games. Better still, the system can be configured up to 32GB of DDR4 (2933 MHz Dual-channel), but can be expanded up to 64GB if you have a need. 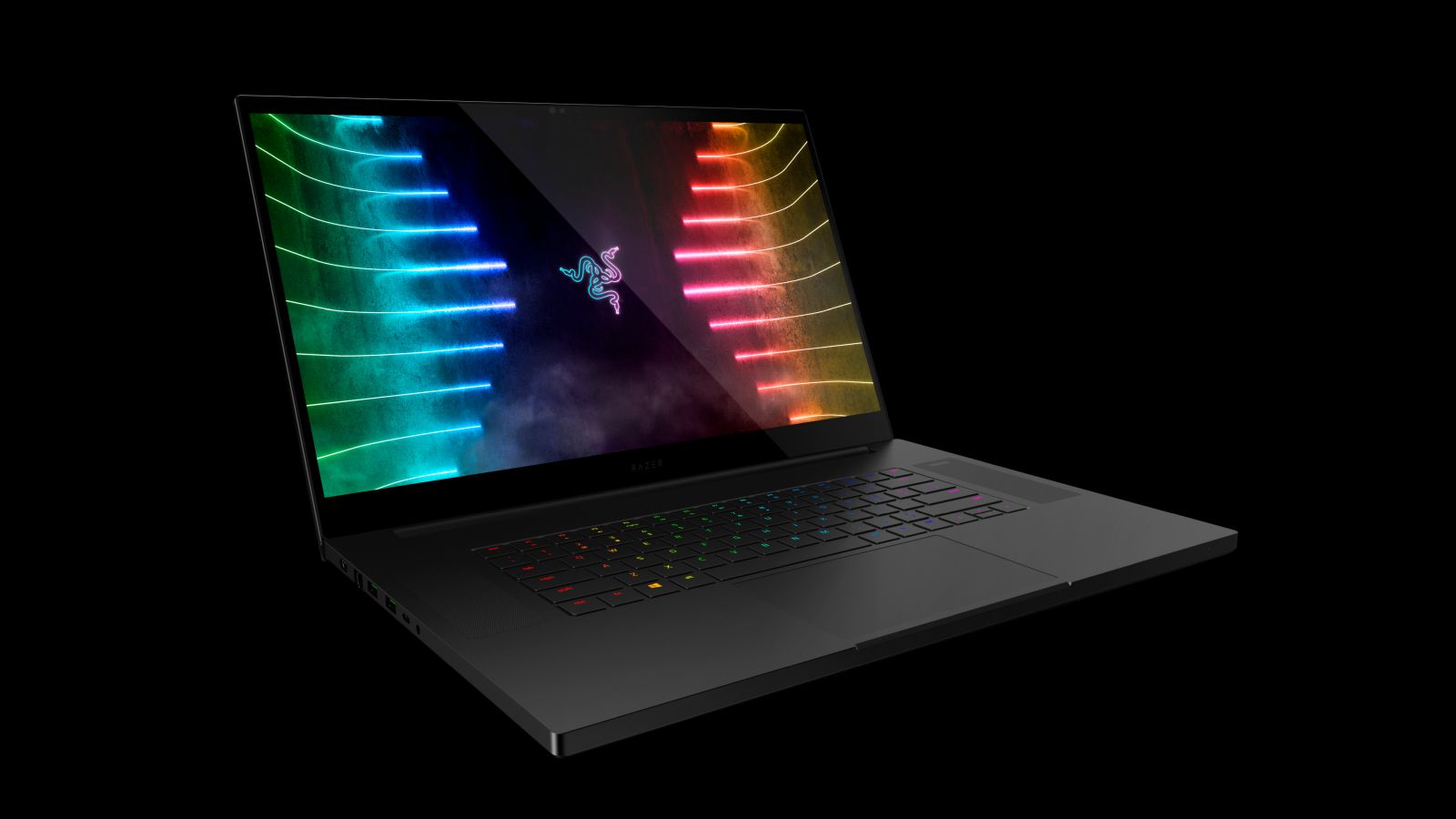 While NVIDIA hasn’t yet announced specifics (though it doesn’t take a genius to figure it out), by the time you read this they will have likely announced a fresh set of 3000 series GPUs for the mobile market. As such, both the Razer Blade 15 and 17, both base and advanced, will sport configuration options for the newest NVIDIA RTX GPUs.

More than quadruple the memory, quadruple the storage, stronger processors, better monitors — all of that is going to bloat the system into a massive boat anchor, right? Nope. Through some incredible engineering work, the PCB is slightly thinner and more compact than the 2020 model — 4% smaller, in fact. Both models measure just 9.25” depth, 0.67” in height, and 13.98” for width.

Headed to the exterior, there are a few new bells and whistles for 2021. Sure, the system has a glass touchpad and RGB (the base model uses zones, whereas the Advanced has per-key), and both sport Thunderbolt 3, USB Type-A, and USB Type-C. Both systems now support HDMI 2.1, meaning the platform is capable of delivering up to 8K at 60Hz or 4K at 120Hz for output.

The base model of the Razer Blade 15 will have WiFi 6, Bluetooth 5, and a full-sized dedicated gigabit ethernet port. The advanced model’s additional horsepower drives WiFi 6E, Bluetooth 5.2, but also has an SDCard reader (UHS-III), a Window Hello IR camera, and can even use its USB-C for charging. It pushes a 20V, which is enough to charge the device itself — something I’ve found to be rare in laptops of this caliber.

As it was with the 2020 model, both versions of the device sport a CNC Aluminum unibody construction with an anodized finish to maximize surface durability.

The team didn’t focus all of their efforts on the Razer Blade 15 — they also tackled a tech refresh on the Razer Blade 17. The Razer Blade Pro 17 will come with three different panel types — a 1080p model that runs at a blistering 360Hz refresh rate, a 1440p model at 165Hz, and even a 4K model at 120Hz. These 17.3” panels sport a micro-edge bezel at just 6mm, granting as much screen real estate to your games and movies as possible. Much like the Advanced model of the Razer Blade 15, it’ll have GeForce RTX 3000 series GPUs, as well as a 10th Gen Intel i7-10875 with 8 cores and 26 threads.

Thankfully, the Razer Blade 17 Pro also sees the upgrades to memory, sporting up to 32GB of DDR4 at 2933 Mhz, with the same stacked PCIe SSDs (either 512GB or 1TB, expandable up to 4TB) for storage.

Most of the time Razer announces projects that are ready to ship, but they also like to dream big. Their concept projects rarely come to fruition, but aspects of all of them have seen the light of day in future products. As such, they’ve announced two projects — one very close to shipping, and the other with aspirations more skyward. We’ll start with one that should be in our hands very soon — Project Hazel. 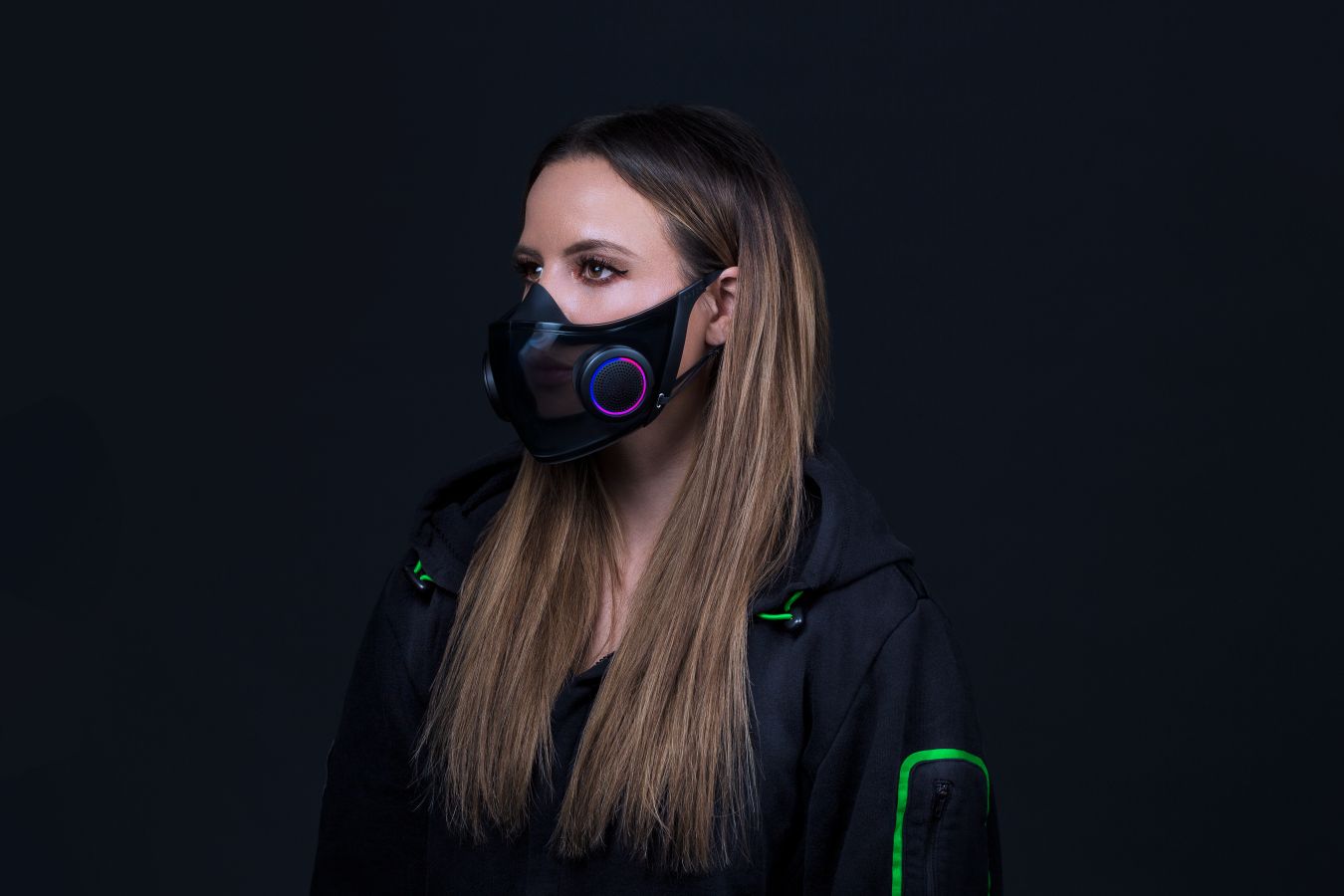 Project Hazel is part of Razer’s #RazerForLife health initiatives. Due to the pandemic, Razer converted several of their manufacturing facilities to make medical-grade masks to help combat the spread of COVID-19, donating over 1 million surgical face masks to frontline healthcare workers worldwide, with the Razer community coming together to deliver an additional 100K more. With these masks, as well as their Razer-branded cloth masks, they thought they might take it to the next level.

Project Hazel is, surprisingly, a new type of N95 mask. These devices were built around five design pillars — safe, social, sustainable, comfortable, and personalized. To that end these devices are built from a transparent plastic, allowing those you interact with to be able to see your face. This is helpful for people who need to read lips, and helpful for conveying emotion as you can see expressions through the mask. That’s not exactly a new concept, but this is Razer — they crank the dial to 11. This device not only sports a set of LEDs for a low-light mode, allowing several lights to illuminate your face in the evening, it also has something called “Razer Voicemap Technology”. This voiceamp puts a microphone in the mask and a speaker array outside, using an audio algorithm to make your voice sound exactly as it does without the mask. No more muffled mask voice! The external respirators provide active ventilation, are replaceable, and are meant for daily use.

Also shipping with this new mask is a case that serves two important functions — it charges the device wirelessly, and it also sterilizes the mask. While the device is in prototype, the team at Razer reports two days of use before needing additional juice, but being able to sterilize it without effort is the real prize here. Project Hazel is built for daily use. 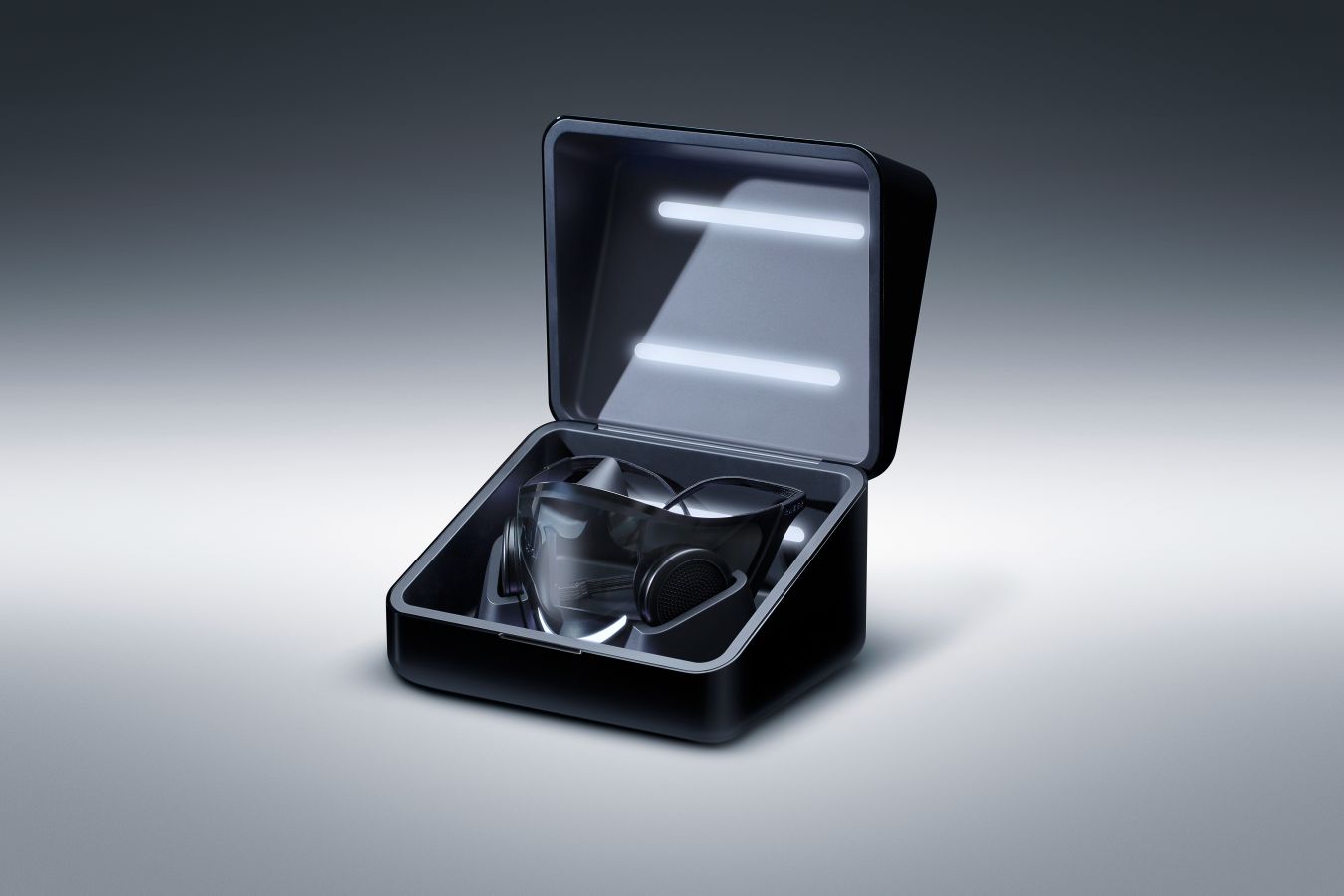 Naturally, this is Razer, so you know this baby will sport full Razer Chroma RGB. Two light rings on the exterior of the ventilation ports will signal the device’s condition (needs filter change, battery condition, etc.) but it also grants full color control to the user.

There’s no word on availability or pricing, but this looks like the pro-level mask for what is, unfortunately, our new normal for the foreseeable future.

The second project is far more aspirational, but not nearly as far-fetched as some previous concept projects. Dubbed Project Brooklyn looks to reimagine what chairs could be. Built on the improvements brought by their own Razer Iskur chair, this device would move away from the ubiquitous look of current chairs and towards one that completely integrates with every immersion aspect possible. 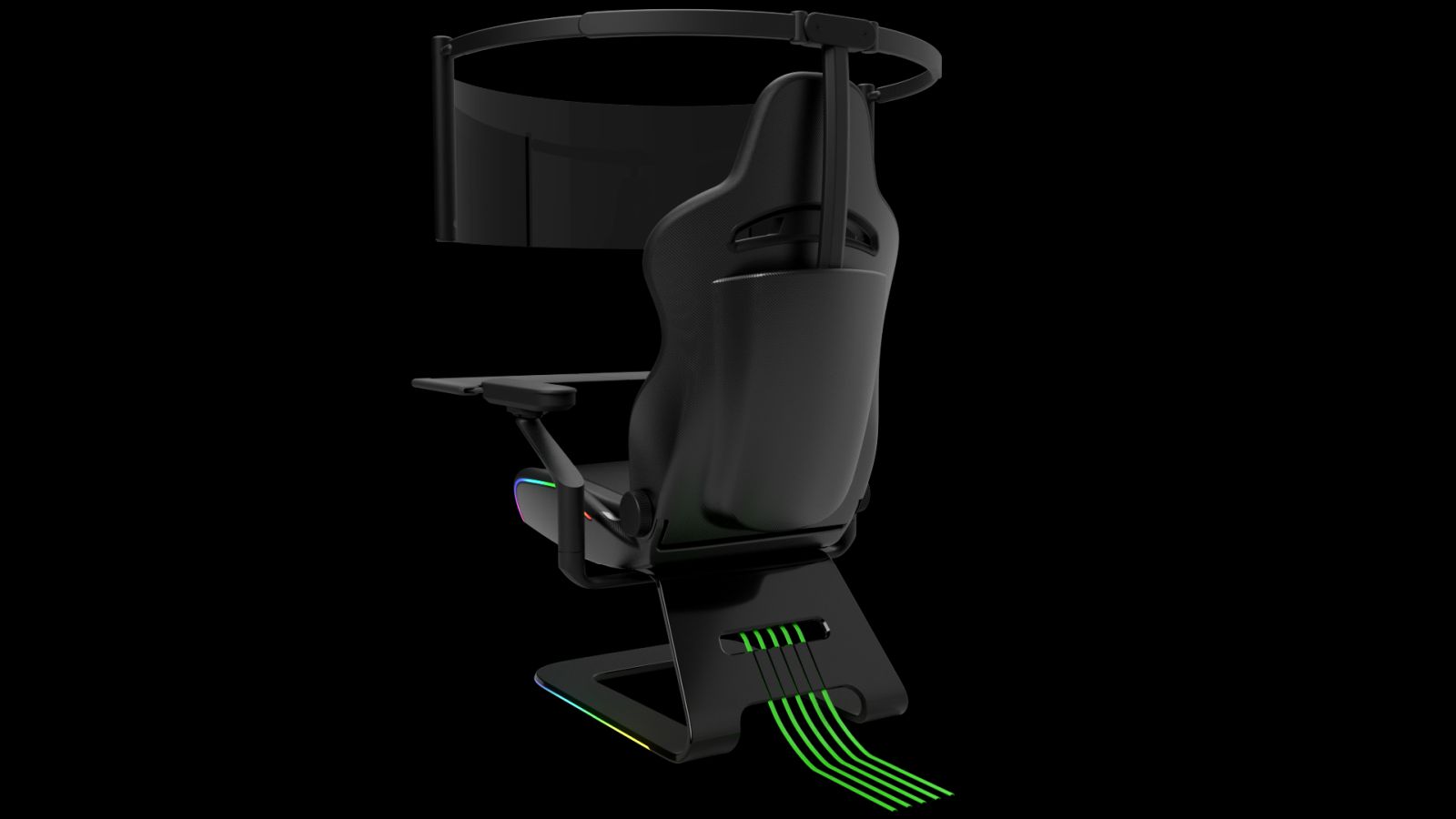 In this vision of the future, Razer would equip this chair with a wrap-around 60” flexible OLED display that would wrap around the player, providing upwards of 180 degrees of immersion. This semi-transparent display would fold up and store behind the chair in an enclosure along the chair spine when not in use.

Also inside this chair would be an array of feedback haptics (the same ones seen in the Razer Nari Ultimate), providing bumps, vibration, and positional audio to bring every bit of entertainment to life. Armrests that can be adjusted for position aren’t new, but Razer looks to integrate two slide-out panels that can be used as a mouse mat, keyboard tray, or slid together to create one solid surface. 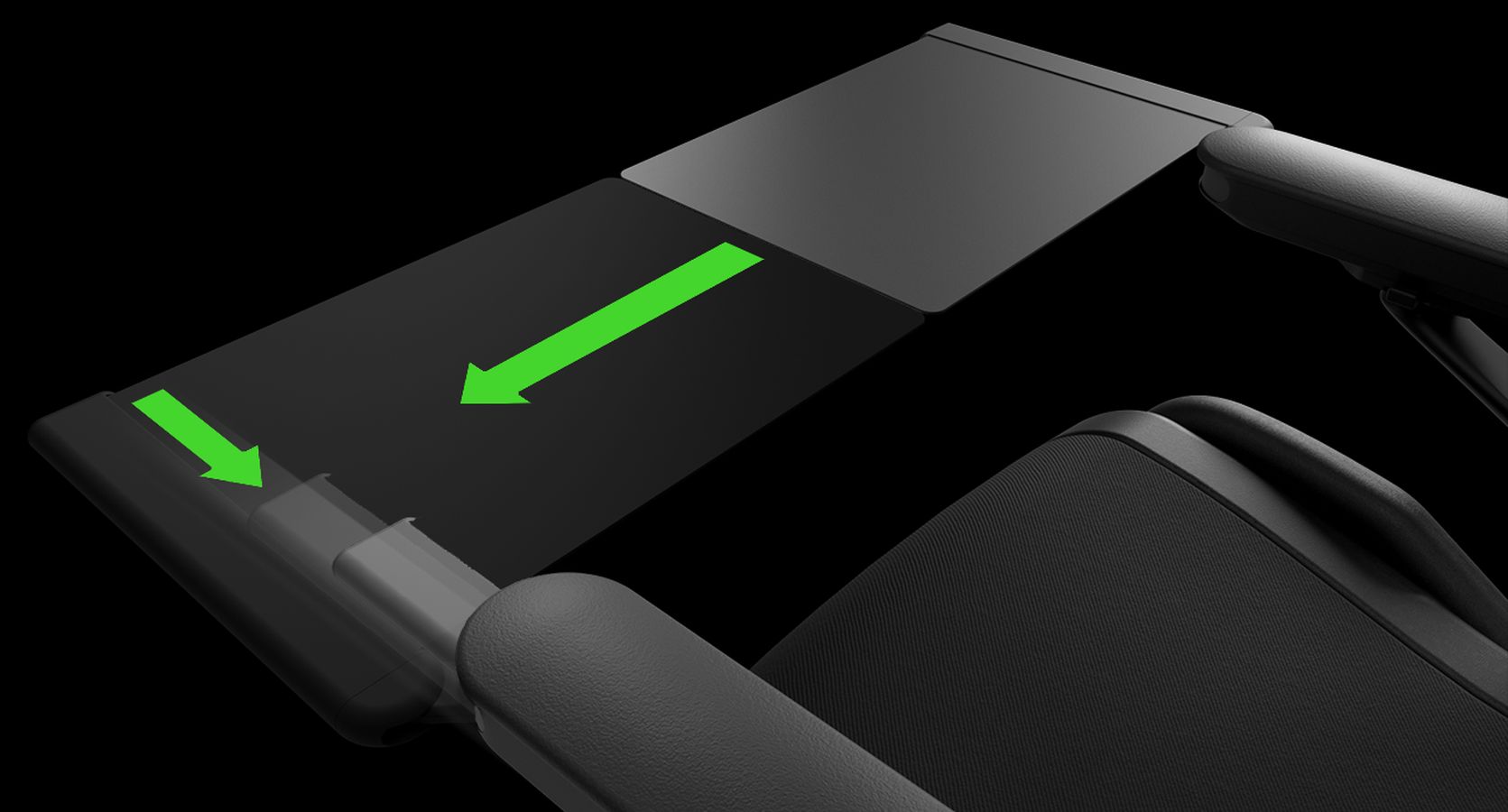 The body of the chair moves away from the office chair roots and more towards the bucket seat seen in race cars and jets. This carbon fiber bucket seat is, naturally, lined with RGB lighting to integrate into the Razer Chroma ecosystem, reacting to in-game events.

The goal of Project Brooklyn is to meet gamers where they are. Meant to fit console gamers, PC gamers, and even mobile gamers, this modular approach to high-end comfort could signal major changes to the space where we spend so much of our time these days. It’ll be exciting to see what parts of this fun concept make their way to the next generation of gaming chairs. I, for one, am ready to move away from the reference design, and it’s great that Razer is ready to lead our way to something new and innovative.

Razer is sure to have a few tricks up their sleeve to show off during this virtual CES 2021, so stay tuned here at GamingTrend.com for all our coverage.