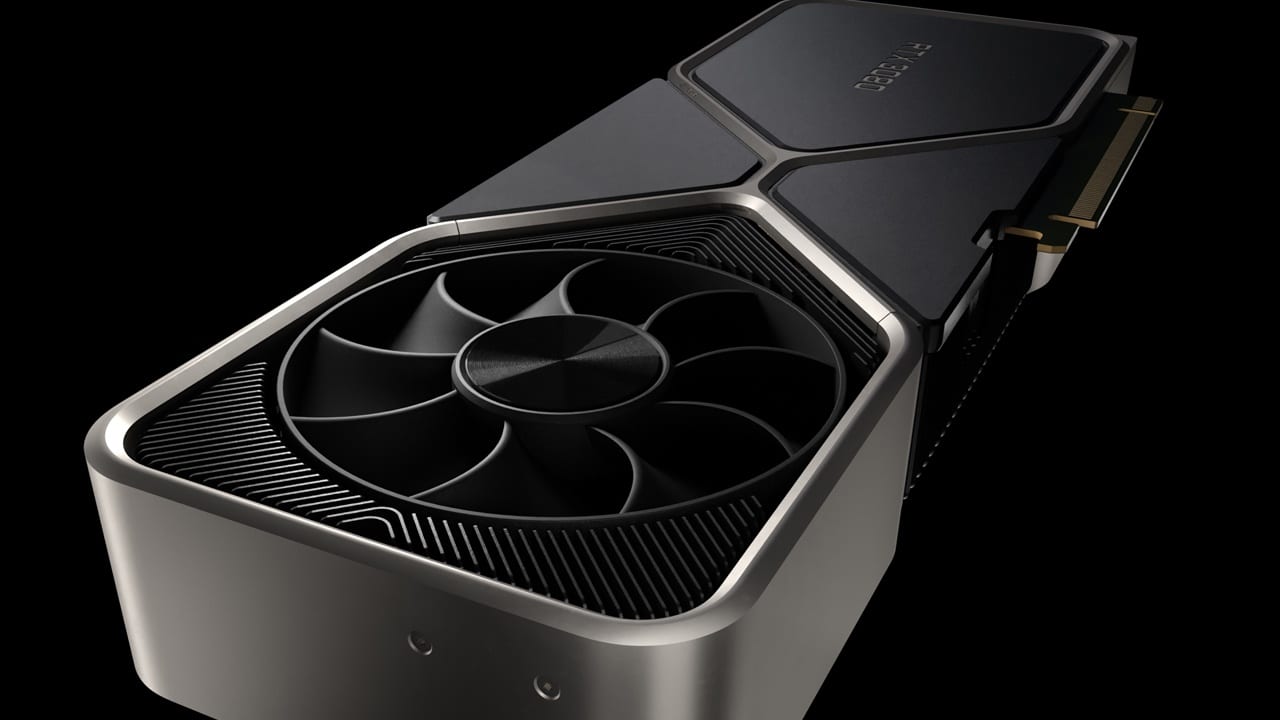 The 2080 Ti has 4,352 CUDA cores, sporting 11GB of GDDR6 with a clock of 14 GB/s for a memory bandwidth of 616 GB/s. Impressive, to say the least. It also has a TDP of 250 Watts (more on TDP in a moment) to deliver all that framerate goodness. It’ll serve as our baseline for comparison.

GeForce RTX 3090
The most powerful of the upcoming cards is the GeForce RTX 3090. It has 10,496 CUDA cores (856 more) and 24GB of GDDR6X, with a boost clock of 1.7 GHz. That extra 12GB of additional memory is noteworthy but the X at the end is the real interesting bit. This new memory architecture allows more throughput per pin for higher clock rates and speeds, which we can see with the staggering 935.8 GB/s throughput — a monstrous improvement over the 616 GB/s offered by the 2080 Ti. This new memory will drive heat, giving this card a TDP rating of 350W.  What’s amazing, however, is that the new cooling system can dissipate that entirely, adding no more heat or noise than previous cards. Interestingly enough, the 3090 also uses a 384-bit memory bus instead of the 352-bit bus of the 2080 Ti. This is important as, the greater the memory bus width, the more data the bus can transfer in a single cycle. If frames make games, this one is going to pour frames like some sort of pressurized waterfall — there’s a reason this thing is nicknamed the “BFGPU”.  The price on this card is $1499.

Let’s talk about power. To run the higher speed 3000 series cards, NVIDIA has introduced a new 12-pin power connector. This, combined with a new cooling system for the card, will spell a marked architectural difference in the look and balance of the card. By providing new power and cooling mechanisms to the card, the NVIDIA engineering team can begin to break through some of the previous barriers encountered by the Volta-based 2000 series cards. But to understand this you need to understand TDP.

TDP or Thermal Design Power, is the maximum amount of heat a component can endure while processing. That isn’t to say that the device would melt at these levels, but more that the computer might choose to throttle the workload to avoid overheating and damage. The device might start dropping frames as it tries to shed heat to pull under safe temperature conditions. To combat this, you should use cooling systems that will drive heat as far away from components as quickly and efficiently as possible. The specification is measured in Watts (the unit for power), but you shouldn’t confuse it with power consumption. For example, when you look up an Intel Core i5 processor and it says “84W” it’s not talking about the amount of power it would consume (Watts), but how much heat needs to be dissipated (also Watts). In short, these cards are going to put off some heat, so NVIDIA is putting new tech into heat dissipation. I’m glad we cleared that up.

But what about the games?   Well, we got a few new videos on what RTX will bring to upcoming games like Cyberpunk 2077, Call of Duty: Cold War, Watch Dogs: Legion, as well as upgrades for games like Fortnight and Minecraft.

It’s not just new hardware, but also some new tech under the hood.  This second generation of RTX also brings support for up to 360Hz displays, as well as an all-new latency analysis engine called Reflex.  which purports to provide a far more accurate shots by minimizing latency.  Check out this amazing 360Hz monitor — you’ll need a 3000 series card to drive that many frames, but it’s gonna be smooth as silk when they come out this fall.

And finally — if you were thinking of picking up one of these amazing cards, then NVIDIA has an additional bonus to entice you.  If you buy a 3000 series card you’ll get a copy of Watch Dogs: Legion for free, as well as a one year subscription to the fantastic GeForce NOW service, letting you stream hundreds of games to nearly any device (including just-launched support for Chromebooks).

It’s a lot to digest, and there’s more to know as well.  Benchmarks on this set of cards should be coming very soon, and there’s no doubt that they are going to be revolutionary.  Stay tuned as we dig deeper into these cards in the very near future.