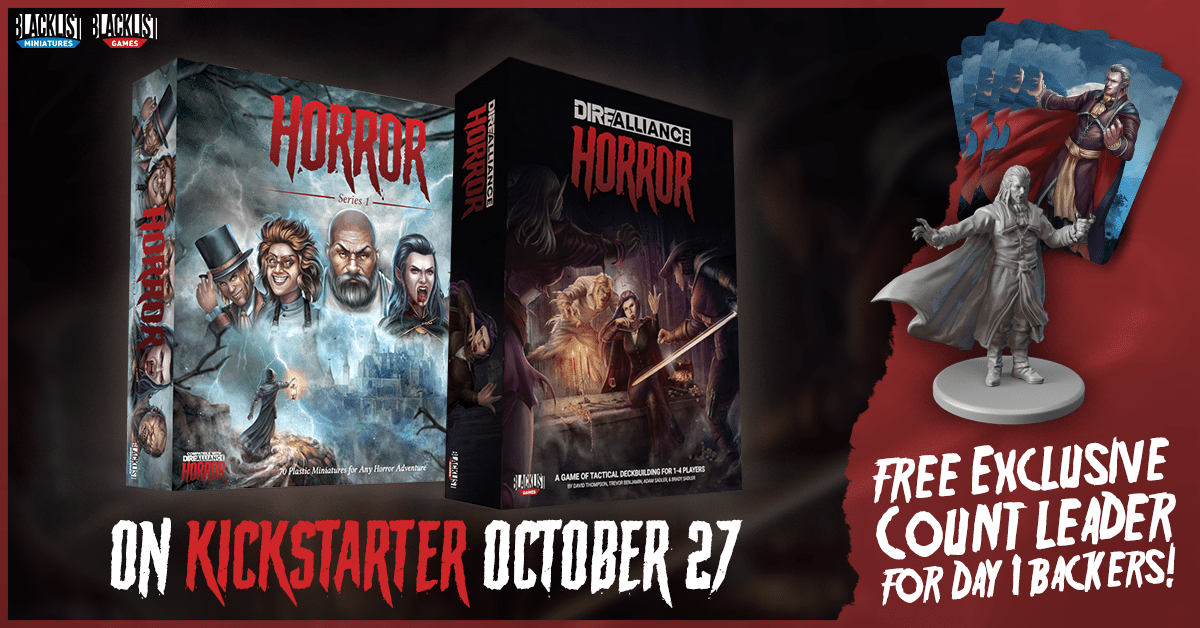 Blacklist Games is known for using decks with figures for their games, but the decks that you use are preconstructed for the character.  You’ll find this system in Brook City and Street Masters.  However, that doesn’t seem to be enough for them, as today they announced that they will have a new Kickstarter campaign on October 27 for a new deck-building series called Dire Alliance: Horror.

In dire times, alliances are not forged from trust and loyalty, but rather desperation and mutual cause…

There are two ways to play Dire Alliance—Battle Mode lets 2 players go head-to-head in an attempt to best the other’s chosen faction and leader with their own chosen combination of faction and leader, while Raid Mode allows 1 to 4 players to work together to take down an A.I. controlled enemy and its minions before they achieve their nefarious goals. In both game modes, players use a hand of cards to make their fighters move, battle, gain new cards, and perform special abilities. Players can only win by accomplishing the goal as described on the chosen scenario sheet!

Featuring fast, deck-driven gameplay, two ways to play, and the ability to mix and match different fighters and factions from across the product line, Dire Alliance lets players create their own stories of conflict and fragile unions across multiple genres!

Dire Alliance: Horror launches its Kickstarter campaign on October 27, 2020, at 12:00pm EDT and will offer exclusive price points and stretch goals for backers and retailers worldwide, as well as an optional set of compatible miniatures in the form of Blacklist Miniatures: Horror Series 1, the next in Blacklist Miniatures’ line of popular miniatures sets.

It’s not shocking they will have new miniatures available as well, but it’s nice they are giving you the option whether to get them or not.  Building your deck as you play the game should give you more customization than just using a preconstructed one.  While horror is a genre that’s used for board games, it’s often used with the Cthulhu mythos, so it’s nice to see something with a different take.  It looks like it will appropriately be up right before Halloween.