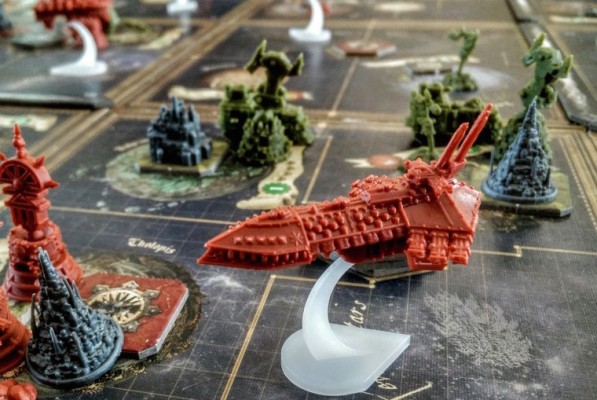 It’s cliché to say that making a top five list is hard because there are so many worthy titles, but when you have a gaming year as good as 2015, even picking just twenty good games, let alone five, is a difficulty. It certainly the best year for board gaming since I made my way back into the hobby a few years ago. This was due to a great mix of highly anticipated games that hit their mark and under the radar titles that surprised.

It’s easy to forget that Forbidden Stars, Fantasy Flight’s sci-fi strategy game with ties to the Warhammer universe, was released in 2015 considering the number of great titles that followed it. Still, Forbidden Stars impressed with its beautiful miniatures and strategic game play while assuring its place in a collection because of its ability to feel like a new game every time. Factions fight over worlds in the Herakon Cluster while focusing on capturing their faction’s unique objectives. At each faction’s disposal is a distinct group of soldiers and fleets, each of which can be upgraded into more powerful versions. You never play the same game twice since board tiles and objectives are set up differently in each game. Hard to think of Fantasy Flight as having an underrated game, but this was certainly it.

Columbia’s Victory in Europe and GMT’s Triumph & Tragedy have been compared a lot. Released within months of each other, they’re both block war games that focus on the struggle for control of Europe during World War 2. Both are great games, but I prefered Victory in Europe just a little more. Variable block powers really added personality to the different forces in the battle and the deck of operation cards made for some interesting decision in how to plan each year’s objectives. Victory in Europe touted itself as a strategic World War 2 game playable in one sitting. They were right as it fit that perfect niche between the light fare of Axis & Allies and the epicness of Unconditional Surrender.

Raiders of the North Sea

The second of Shem Phillip’s North Sea Trilogy, Raiders may be one of the most beautiful board games I’ve played. Its predecessor Shipwrights was a nice game, but Raiders is simply outstanding. Players take on the role of Vikings looking to plunder settlements to gain favor from the chief. For such a simple game, there’s a lot to think about as you have hand management, worker placement, and set collection elements combining to help you achieve glory. The artwork on your crew cards is so wonderfully vile that you almost feel guilty when they die, and you gain victory points from their ascension into Valhalla. With the third game in the trilogy set to kickstart later this year, the brilliance of Raiders of the North Sea has me anticipating what Shem Phillip has next in store.

One of the greatest things about 2015 was the influx of war games that aren’t really war games at all. Victory Point’s Wings for the Baron is a great example of this new trend, a game built around hand management with war merely a backdrop. 2015’s great game of this ilk was Churchill. In fact, designer Mark Herman didn’t see his release as a war game. Instead, the focus here is on the political maneuvering of World War 2’s big three: Stalin, Roosevelt, and Churchill. Each player takes the role of one of these leaders and uses cards to debate issues back and forth. What sounds like a boring lesson in Civics class is actually an intriguing game. Various debate topics swing wildly across the board as each leader wields his own political might. The game’s winner is the one that shapes the future of the post-war world through a combination of spy rings, political influences, and building the atomic bomb. The war is almost secondary to the conflict behind the frontlines.

I hesitate putting a heavier war game on this list, but war gaming is certainly a part of this great renaissance in gaming. Besides, even if you aren’t into war games, GMT’s U.S. Civil War is a game so well put together that just watching it unfold is an experience. GMT has long been lauded for its quality, but this exceeds even their lofty standards. A thick mounted board, great rule book, and magnificent counters make this a treat to set up. Like most counter war games, it’s not for the faint-hearted, but the game actually has a fairly natural flow to it. The game does an excellent job of mimicking the struggles that both the Union and Confederates faced in the war. The Confederates face an uphill battle. Woefully undermanned with vast expanses to defend, the Rebels rely on the strength of their generals to tend the tide. Meanwhile, the Union army grinds slowly along, playing a war of attrition against the South until Grant and Sherman arrive to turn the tide. U.S. Civil War is more than a war game. It’s an experience that sheds light on one of America’s greatest struggles and done so in a way to ensure that it hits the table time and time again.