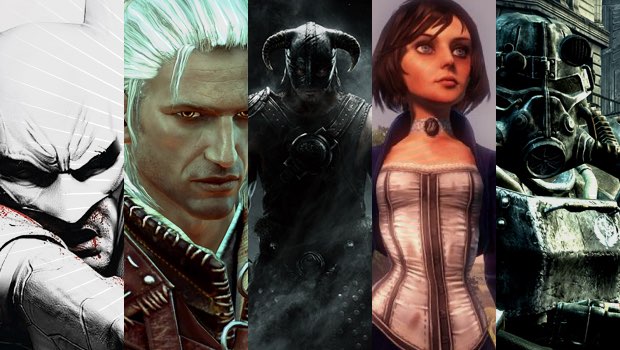 In a sea of action-RPGs, The Witcher 2: Assassin of Kings stands tall among its peers. Based on the works of Polish author Andrzej Sapkowski, the tale of Geralt of Rivia starts off with a bang: framed for the murder of a king he was sworn to protect, Geralt is let loose from prison to find the man who framed him and clear his name. Along the way, you’ll discover the secrets of Geralt’s past, the devilish conspiracies at play throughout the kingdom and the secret of the Wild Hunt.

While set in a fantasy world, The Witcher 2 is a dark, mature story more akin to Game of Thrones than Lord of the Rings. While a witcher’s profession is to hunt monsters, it’s often noted that the humans throughout the world are crueler and more vile than most beasts you encounter. A smart plot, branching paths, and a bevy of choices with no clear black and white await you throughout the game, and the combat is one part careful preparation and planning, and one part reflex and skill. The Witcher 2 tells a grand tale and allows for true player choice throughout the title, crafting a memorable and unique experience for everyone who plays; The Witcher 2 is one of the most unique and compelling RPG experiences of the generation. – Eric Van Allen, Editor

Bioshock Infinite is a game that you have to play twice to really get the full experience.

Infinite is by no means a straightforward story, but in its final moments the big picture is revealed, and nothing is as you believed. Playing through Infinite a second time allows you to piece together a puzzle that you simply walked through before. What presents itself as a story about rescuing a young girl to wipe away your own debt turns out to be something much larger in scale. Infinite is a story of redemption, a look at destructive extremism, and a deconstruction of a fantastic formula that culminates into something that is thought-provoking and altogether remarkable.

How Bioshock could ever continue after we’ve been given such a holistic look behind the curtain and still feel genuine is unclear. But as Elizabeth points out, all we need is a lighthouse, a man, and a city, and a compelling narrative rife with game-altering twists will follow. – Kenneth Shepard, Lead News Editor

Fallout was dead for a long time before Fallout 3 came along. While this probably wasn’t the sequel old-school Fallout fans were expecting, its hard to deny how fantastic a game it was. This post-apocalyptic version of Washington D.C. not only drips with atmosphere, but it’s packed to the brim with content. The inventive VATS system, the deep perk system, the variety of locations to explore, and the options you have on how to play the game all come together incredibly well.

The Capital Wasteland is a place I never quite want to stop revisiting. It even has the benefits of containing one of Bethesda’s better written tales, and what game weapon could ever top a mini-nuke launcher? If all of that wasn’t enough, the game has Liam Neeson in it. That’s all you need to know. – Niko DelValle, Editor

The Elder Scrolls has long maintained high popularity. That’s impressive for a pen-and-paper medieval style RPG, especially considering that those sales were not without merit. Skyrim in particular represents all the things people hold in the highest regard when it comes to Bethesda games. It represents the heights of what Bethesda sets out to do when they make a video game.

It had an enormous open world complete with tons of activities to pursue and quests to complete. The combat was much improved from previous iterations, and finally, the third-person worked on consoles. There were plenty of epic fights to be had in Skyrim, and many people still play it to this day thanks to its seemingly neverending stream of content. – Niko DelValle, Editor

When Batman: Arkham Asylum landed on consoles in 2009, it defied expectations by proving that licensed games don’t always have to suck.  For the first time ever, players actually got to experience what it was like to be the Batman, complete with all of his combat, stealth and detective skills available.

It was even more surprising, then, when Rocksteady managed to raise the bar with Batman: Arkham City.  No longer confined to the hallways of Arkham Asylum, players were able to explore a fully-realized, closed-off section of Gotham City that felt alive and authentic to the Batman experience.  Not a single area in that open world felt like it didn’t belong, and every locale was brimming with character.  Of course, players were able to experience it all due to the awesome traversal of the game based on Batman’s grapnel gun.

The story was excellent, the stakes were higher, and the performances were spectacular.  Oh, and that ending is one of the most shocking moments in video game or comics history.  Man, right in the feels. – Matt Welsh, Editor