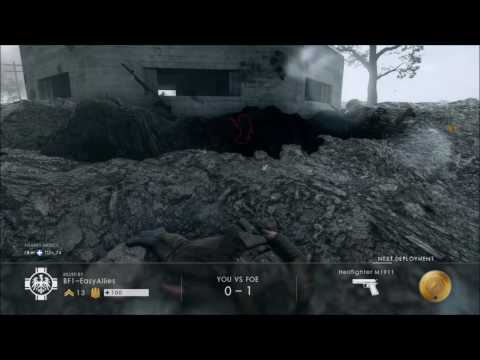 Gamers have grown accustomed to the fall shooter routine; Battlefield in October, Call of Duty in November (Battlefront replacing last year’s Battlefield slot). The games themselves were also becoming boringly predictable and increasingly indiscernible, both franchises opting for the near-future fiction in recent years.

This fall, however, the selection of multiplayer shooters has grown in number and variety. Titanfall is entering the annual shooter season head-on with its sophomore title, Battlefield 1 is bringing the franchise back to historic warfare, and Call of Duty: Infinite Warfare is pushing further into the future while also offering a Modern Warfare remaster and a PSVR experience. Die-hard fans of each franchise will undoubtedly stick to whichever title they swear fealty to, but for those who grew tired of the modern FPS through years of franchise fatigue (like myself), this lineup offers an exciting new pallet to choose from.

When Battlefield 1 was first announced a few months ago, its World War I (WWI) setting took many by surprise. World War II, modern combat, and near-future combat, are standbys of the first person shooter genre. Many significant wars have remained under represented, or not represented at all, as developers have continually favored tried-and-true over new and different. With Battlefield 1, DICE and EA have broken this repetitive pattern and produced something truly magnificent.

If you pick up a history textbook, it’ll tell you that there was a very clear enemy, an obvious aggressor, and a terribly evil man behind the events of World War II. In the First World War, on the other hand, the lines of right and wrong, good and evil, were not drawn so distinctly. A single assassination served as the catalyst that caused the war to break out, but various countries were pulled into the conflict for different reasons throughout the war’s four-year duration. Sometimes referred to as “The War to End All Wars,” this was a clash of old tactics and new technology; old empires were toppled and new countries rose to prominence in their place.

Titanfall 2 comes out this month, and its release falls smack in the middle of the two biggest annual titles of the industry. It’s a bold move by EA to stick to a release date so close to the mammoths that are Call of Duty and Battlefield (and slightly confusing, considering Battlefield 1 is also an EA published title). But judging by what I played during the tech test back in August, the game’s multiplayer can stand toe-to-toe with any modern shooter.

I only played about 12 hours of the first Titanfall’s multiplayer, but from what I remember, I had enjoyed the game’s balancing act between Titans and Pilots. It felt great being able to take on the goliath machines while on foot, and it felt even better to get in one myself. But the gameplay soon became too fast for me to keep up with as my rank increased, and I — like everyone else — craved a single-player experience.

In many ways, Titanfall 2 is the answer to all my grievances. A spongier health system, more open map design, and a more tactical approach to Titan takedowns all serve to slow down Titanfall’s volatile combat systems and add a welcome complexity to the mix. I took issue with some of the new modes’ systems, and the new open map design introduced a few new issues; but all in all I enjoyed my time with the pre alpha test and am now very excited to see what Respawn has planned for the final product.

I hear it from my friends every year. “Another November, another Call of Duty” — clearly fans are feeling a bit of fatigue for the franchise. Last year we saw a glimmer of what Activision and Treyarch had in store for us to break that cycle with Call of Duty: Black Ops III. Justin Pauls gave it a rare 100%, calling out evolution in combat, how movement and graphical fidelity built a whole new level of immersion, and praised it highly for surprises around every corner.

Call of Duty: Infinite Warfare spells a large departure for the series. Slipping the surly bonds of Earth, Infinite Warfare takes place in a bleak and distant future. The Earth has been mined of all of its precious resources in response, the United Nations Space Alliance (UNSA) is formed with the goal of reaching for the stars to establish new mining colonies to sustain humanity. Naturally, this doesn’t go according to plan as a hostile faction called the Settlement Defense Front (SDF) rises to power and attempts to seize control of these precious resources. In Infinite Warfare, players will step into the boots of Captain Nick Reyes (voiced by Bryan Bloom), commander of the UNSA Warship Retribution. Their mission is to halt the incursion of the SDF, expelling them from their already-successful siege.

Raven Studios has a long and tenured history of creating incredible games. They’ve also been involved with the Call of Duty franchise since 2010. By constructing the franchise’s multiplayer modes, they’ve been an integral part of Black Ops, Modern Warfare 3, Black Ops II, Ghosts, Call of Duty Online, Advanced Warfare, Black Ops 3, and are now the braintrust behind Call of Duty Modern Warfare Remastered. This remastered edition is more than a simple bump in resolution, as every aspect of the game has been lovingly rebuilt with higher resolution textures, stable framerate, dedicated multiplayer service, and more. The game will also feature all sixteen of the maps that the original shipped with, ten of which will ship at launch, and the remaining six added in December at no additional charge.

Ok, so maybe saying that it’s the first killer title for VR is overreaching a bit, you have to understand just how excited I am for this PlayStation 4 exclusive mode. While this virtual reality mode is being packed in as a freebie for Sony’s PSVR headset, it is a taste of what’s possible with the platform.

This mode, entitled “Jackal Assault” was a quick mission that immediately reminded me of the best parts of Battlestar Galactica. Hopping into my Jackal I looked down seeing how the game translated my thumbstick movements to my avatar’s left and right hand. The cockpit was alive with lights and sensors; there wasn’t a square inch that wasn’t lovingly rendered for a sense of incredible immersion. Jamming the throttle forward, I did a slingshot launch off the carrier Retribution and the world expanded exponentially.

Looking around I was in the outer orbit of some unnamed planet, throttling around to execute a quick debris-clearing mission. The sense of distance and depth was amazing, and something that most VR experiences I’ve had haven’t managed to capture. The flotsam of what looked to be a destroyed capital ship gave me a quick exercise of my guns and missiles, but my long range sensors picked up an anomaly in the distance that demanded more immediate attention. Hustling towards the vortex, I was greeted by the silhouette of a massive enemy capital ship jumping into this sector.

Make sure to check back for our reviews for Titanfall 2, Call of Duty: Infinite Warfare, and Call of Duty: Modern Warfare Remastered!