Have you ever considered Villainy as a career? Not regular crime or even organized crime – Villany with a capital V, archnemesis, super weapons, minions, evil lairs, the works. In Lovingly Evil, the big bad dating sim, evil isn’t just your career; it’s your passion. As a new bad guy in the biz, you’re attending your first Villain Conference, an event where you can network with other villains, learn how to grow and improve as an evildoer, and perhaps even forge new friendships or romantic relationships.

At the start of the game, you’ll create your character by customizing their appearance from a variety of options, and choosing their pronouns, name, age (up to 10 characters), and evil backstory. For my various playthroughs, I created Malinda: a 1234567891 year old demigod encouraged to become evil by her former cat. If you couldn’t tell, Loving Evil is largely focused on comedy. (Think Monster Prom, but single player.) While it is a dating sim, your relationships with the various bachelors and bachelorettes are moreso vehicles for puns and other, lesser forms of humor than they are attempting to warm your heart or give you some sense of companionship, however fleeting, in our currently isolated world. Your potential love interests include Nova, a dissatisfied AI created to be a scientist’s perfect “Waifu,” Felix Von Gloomheart, a vampire who sells flowers, Imperia Maissard, an evil stepmother and queen, Satan himself, who needs no explanation, and a clone of yourself, who’s surprisingly nice when you get to know them. Each character has at least two endings, one of which is usually romantic in some nature. 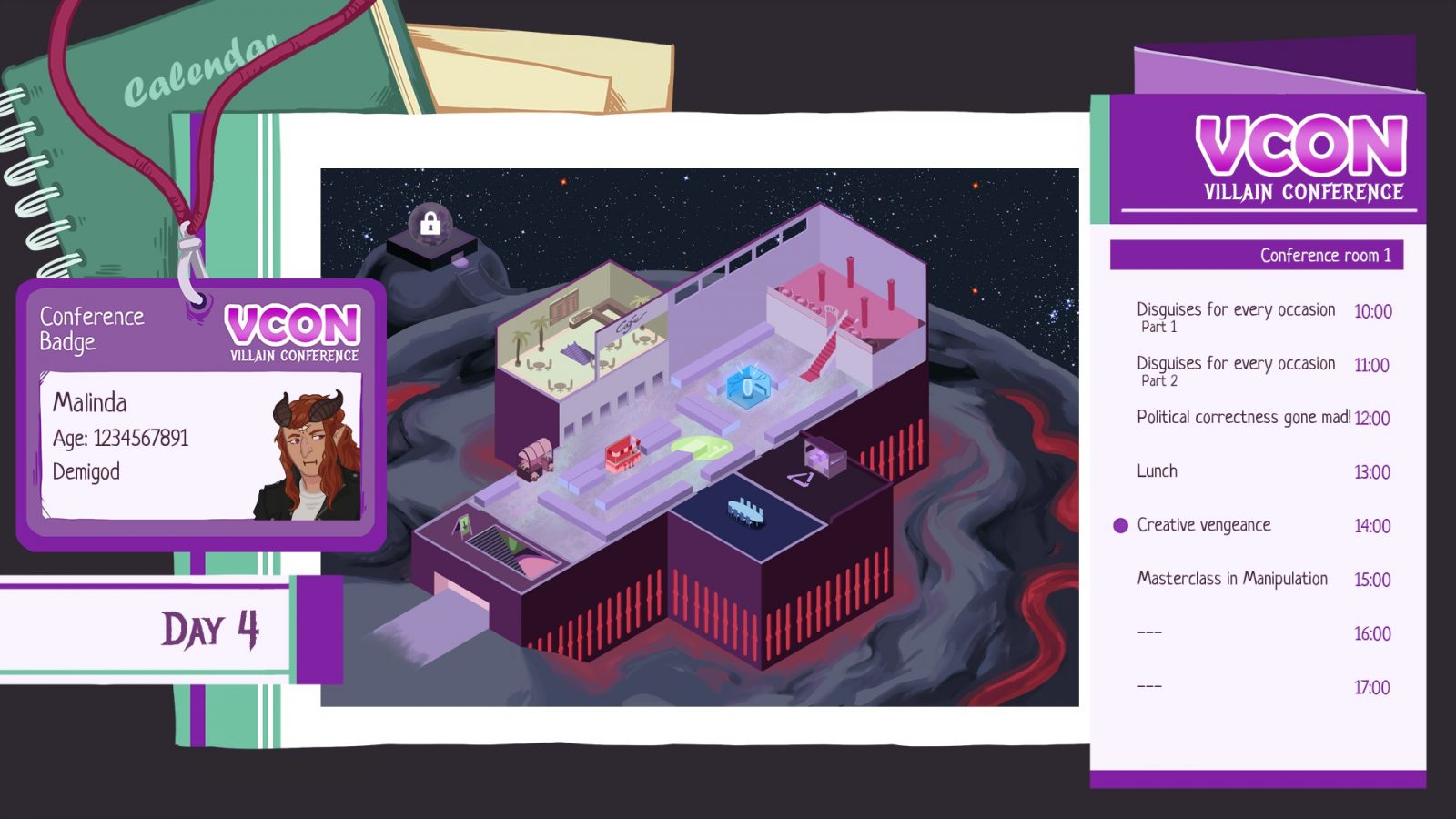 This is a visual novel, so gameplay mostly consists of reading and choosing dialogue options, though the game has a few things which make it unique. This is a conference after all, so you’ll need to spend each hour of the four days wisely by chatting up the apple of your eye, attending talks on Villainy, eating lunch, checking your texts, or playing minigames. While I enjoyed the time management aspect, especially since dialogue choices that will advance time are clearly marked, it does have a few problems with it in terms of pacing. After my first failed attempt at taking over the world with Nova, my strategy for each subsequent run was to stalk whoever’s route I was attempting until they ran out of dialogue, go to a talk to kill an hour, check back on my love interest, and repeat the last two steps until they had new dialogue. This is a relatively small nitpick, but it would be nice if an area of the con floor was marked in some way when a character had new dialogue.

The minigames are very hit or miss; Nova’s trivia is short and simple enough to be an enjoyable change of pace, but all the others just take far too long to complete. For example, Satan may ask you to watch his food stand for a bit and you’ll have to cook for patrons while simultaneously giving advice to his minions. It’s a good concept, but there’s so much time between receiving an order, being able to start grilling that order, and other people coming up that it’s extremely easy to forget what someone wanted. It’s clear that the player being overwhelmed and forgetting things in the chaos is the intention, but it’s far too slow to do that. Instead, I felt uninterested and was just waiting for it to be over. You’ll be asked to play each minigame multiple times in a single playthrough as well, with no option to skip, which means you’ll also have to go through the tutorial on subsequent playthroughs. The core concept of each minigame is interesting, but their execution ends up feeling dull. 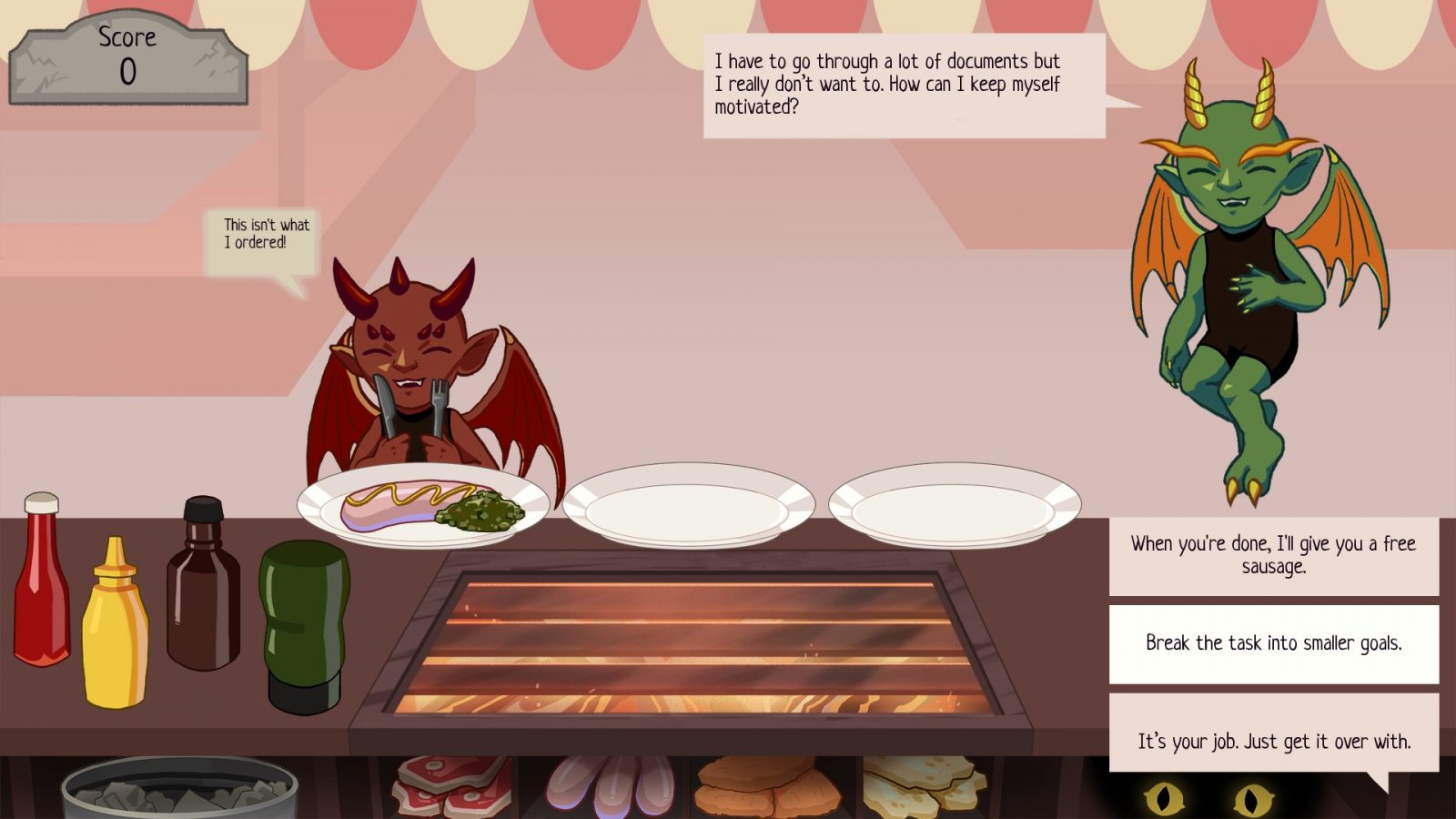 Lovingly Evil was made using Ren’Py, a popular game engine for visual novels, so it comes with all the standard options that program provides like windowed or fullscreen modes, a variety of text skip settings, the ability to go back in text, and a large assortment of save game slots. It’s both a solidly made engine and game; the only major glitch I encountered was in an optional texting conversation where some dialogue was missing and caused an error (which you can see in the video), but the game continued regardless and I didn’t feel like I missed much.. The art style is stylized yet detailed, with some very creative character designs to go along with the hilarious dialogue, which can occasionally get slightly philosophical. However, I found the endings I received in several playthroughs to be unsatisfying. Maybe others in the game are better, but I would have liked a bit more detail since they don’t really go beyond a first date.

Lovingly Evil is a funny and charming dating sim with interesting characters and frustrating minigames. While it is well-written, don’t expect the game to get too deep or go beyond the start of your relationship with one of the characters.

David is the kind of person to wear his heart on his sleeve. He can find positives in anything, like this is a person who loved Star Fox Zero to death. You’ll see him playing all kinds of games: AAAs, Indies, game jam games, games of all genres, and writing about them! Here. On this website. When not writing or playing games, you can find David making music, games, or enjoying a good book. David’s favorite games include NieR: Automata, Mother 3, and Gravity Rush.
Related Articles: Indies, Lovingly Evil
Share
Tweet
Share
Submit