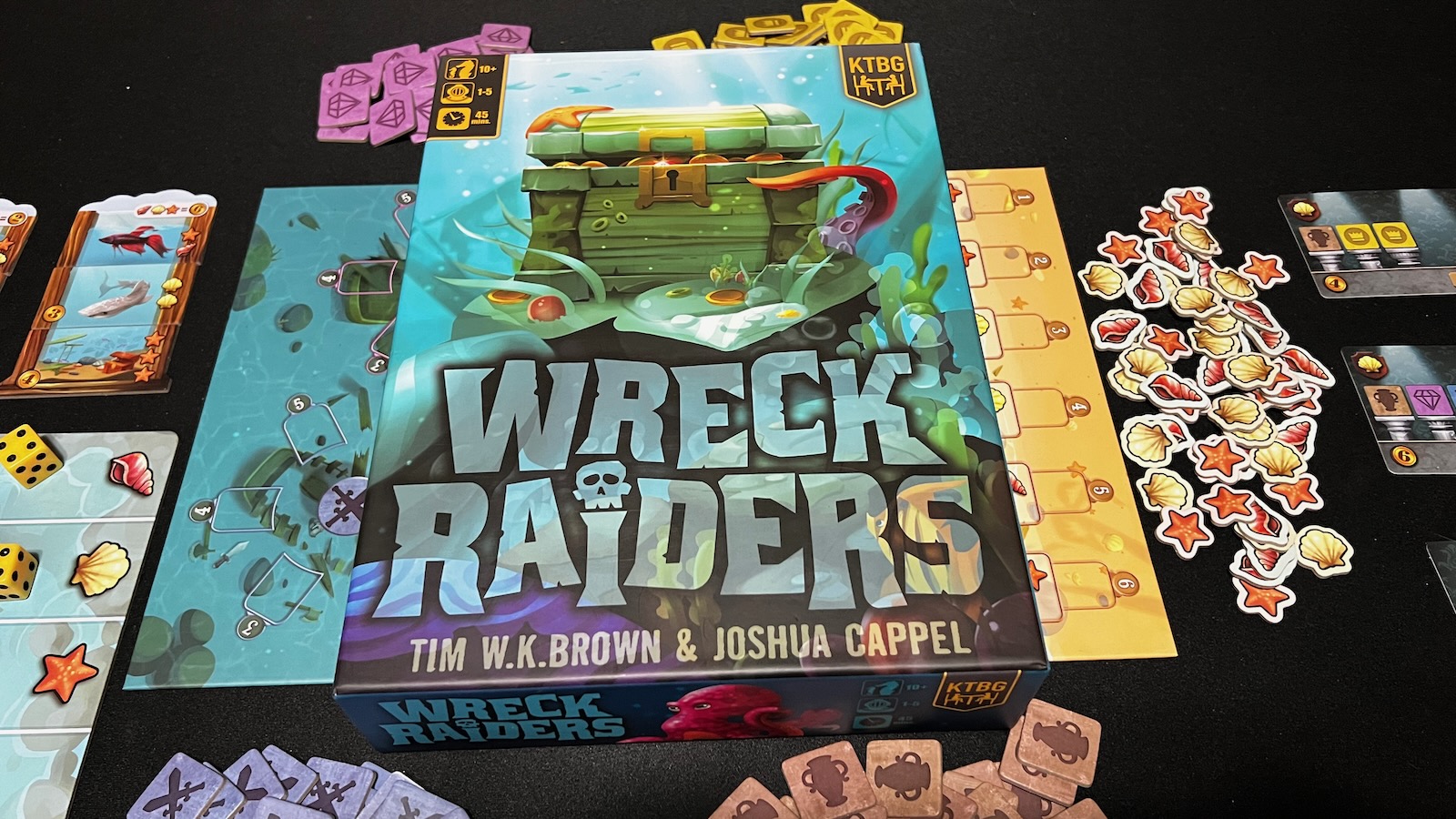 The ocean has always been a mystical thing to me. The surface can be calm and serene or be moving with powerful waves. You can harness the wind with a sailboat or comb through the stuff that washes up on the shore. Stick your head underwater and you are in a whole new world. There is an amazing array of sea creatures, a vast amount of nothingness, and everything changes the deeper you go. Because of this wonder of the seas, Wreck Raiders and its theme caught my eye almost instantly. 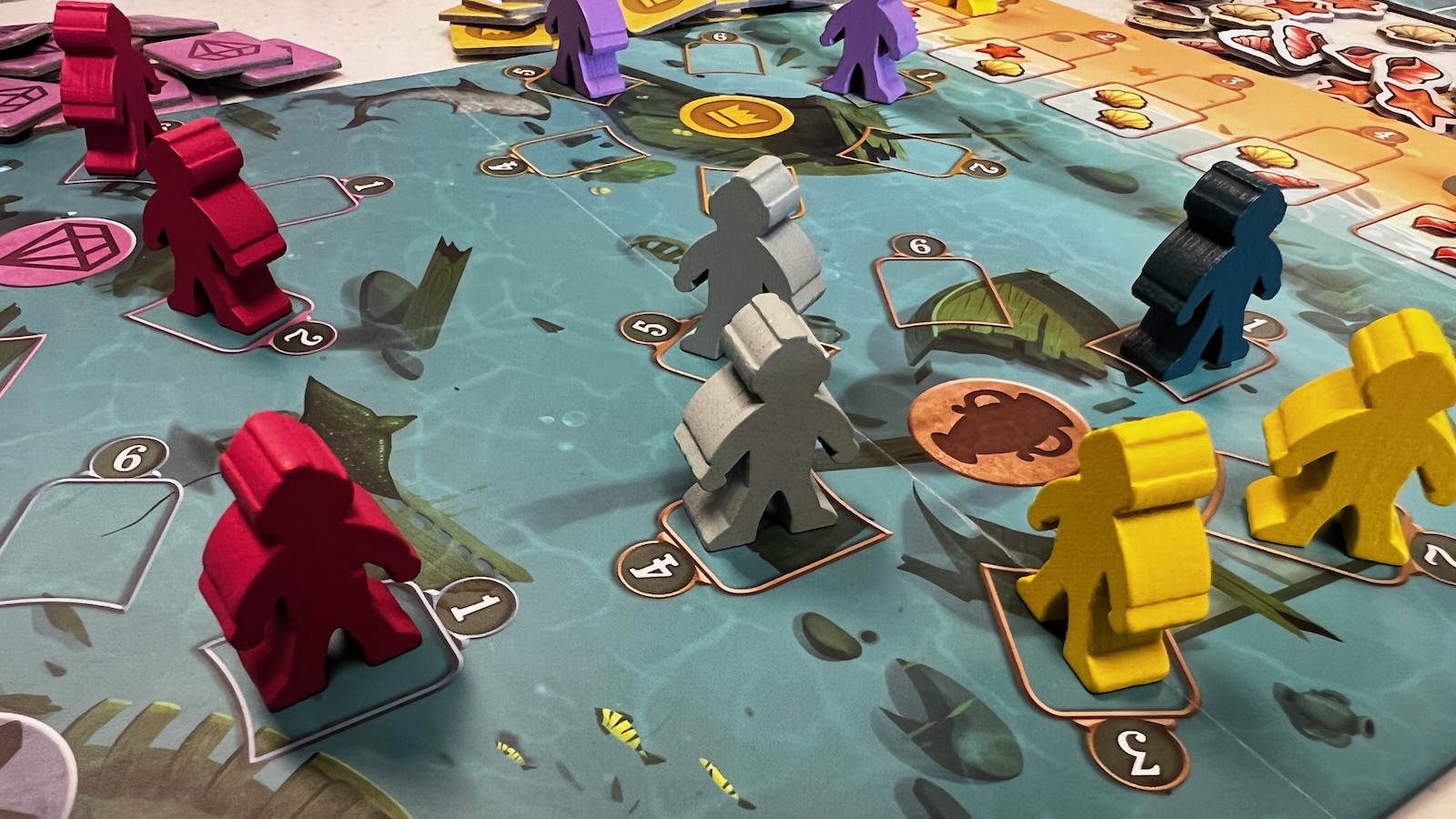 Divers at various wrecks on the main board.

Wreck Raiders is a 2019 release for 1-5 players from designers Tim W.K Brown and Joshua Cappel and distributed by Kids Table BG known for Fossilis and Creature Comforts. Throughout the game, players send divers to different ship wrecks across the ocean floor to salvage treasures and head to the beach to collect washed up seashells for display. Players complete contracts and horde treasures in their vault to score the most points by the end of the game.

At the beginning of a turn, players draft a dice from the coral reef board and move one of their divers to the corresponding numbered space on one of the four shipwrecks on the main board or beach space. The beach spaces give players seashells such as scallops, starfish, and conches used in other phases of the game. Players can bump another player back to the supply if they would like a specific beach space. Wreck spaces give the player a treasure corresponding to the color and symbol on the wreck. Players have to be strategic in their placement because adjacent divers, whether they are the current players or not, will also get a treasure as well. This can help your opponents or maximize your turn if one of your divers is already at the wreck. Players can also bump their divers or an opponent’s diver off of a wreck space and onto the beach. After drafting, players either place their treasures in a museum exhibit or flip them over and place them in the vault. 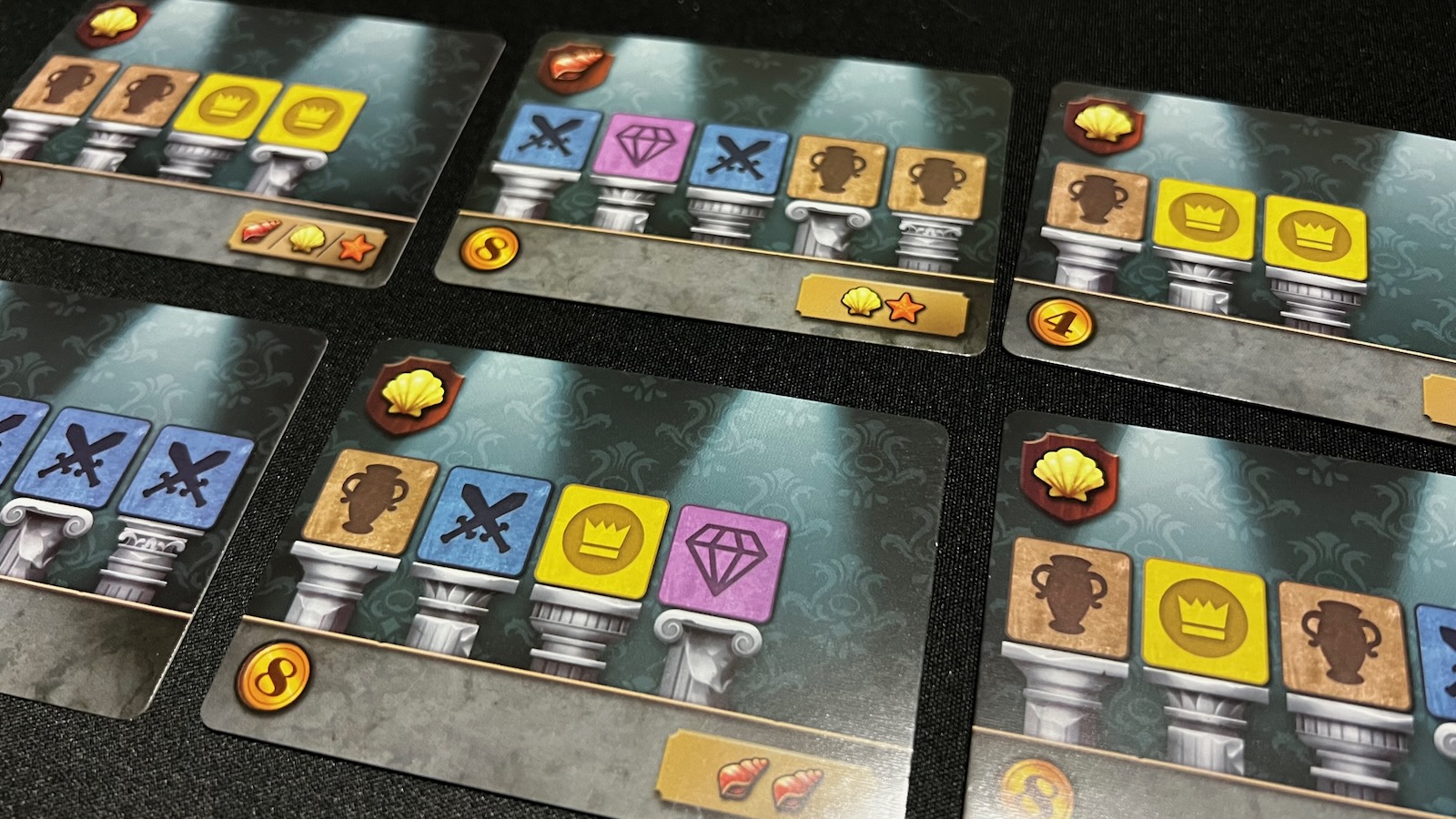 Treasure tiles are placed in the museum to complete exhibit cards that are worth points at the end of the game. Treasures are placed in any of the three rows in the leftmost empty spot. Exhibits only need the correct tiles to complete, but if a player can also place the tiles in the correct order, they will receive a bonus in the form of extra seashells or aquarium pieces. When players claim an exhibit, they will discard the treasures used and may add a skull or scallop seashell to the display depending on the card. Conches add two points to the exhibit’s total and scallops gain you a treasure from any wreck by discarding the shells back to the beach.

The vault is used to store treasures and scores players points in two different ways. Each row that has the same color scores the player more points the higher the row is in the vault. Players will also score points for each unique tile in their vault based on the pictured treasure. Players must stack treasures in the vault from floor to ceiling, so tile placement must be strategic. 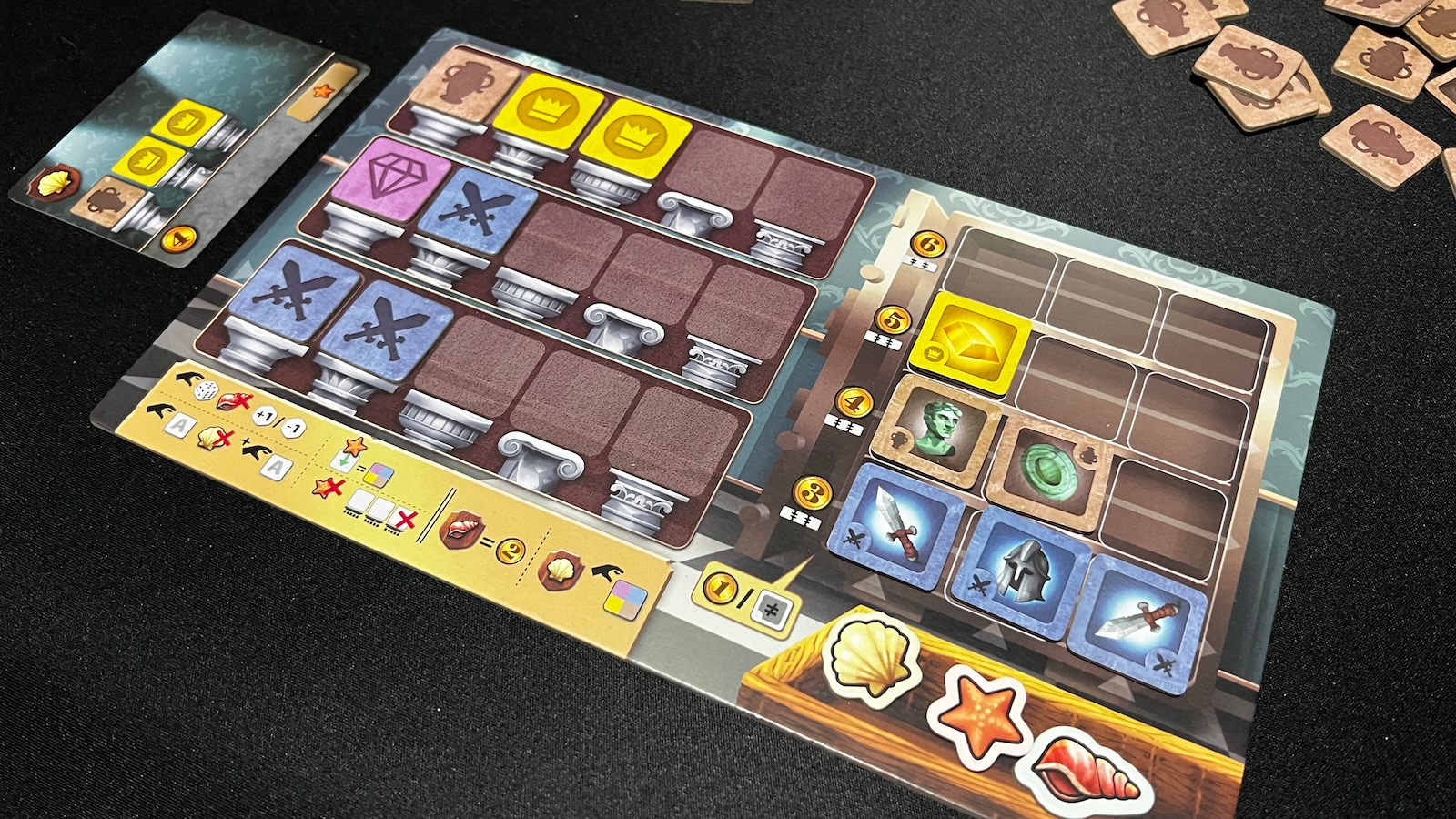 Player board with museum exhibits on the left and the vault on the right.

Another element of the game that scores players points is building aquariums. Each player may buy one aquarium piece using their collected seashells and can have multiple aquariums completed or under construction. Bottom pieces start new aquariums and give points, middles can be placed on bottom pieces or other middle pieces and also score points, and top pieces have special end game scoring conditions based on the images in the aquariums. 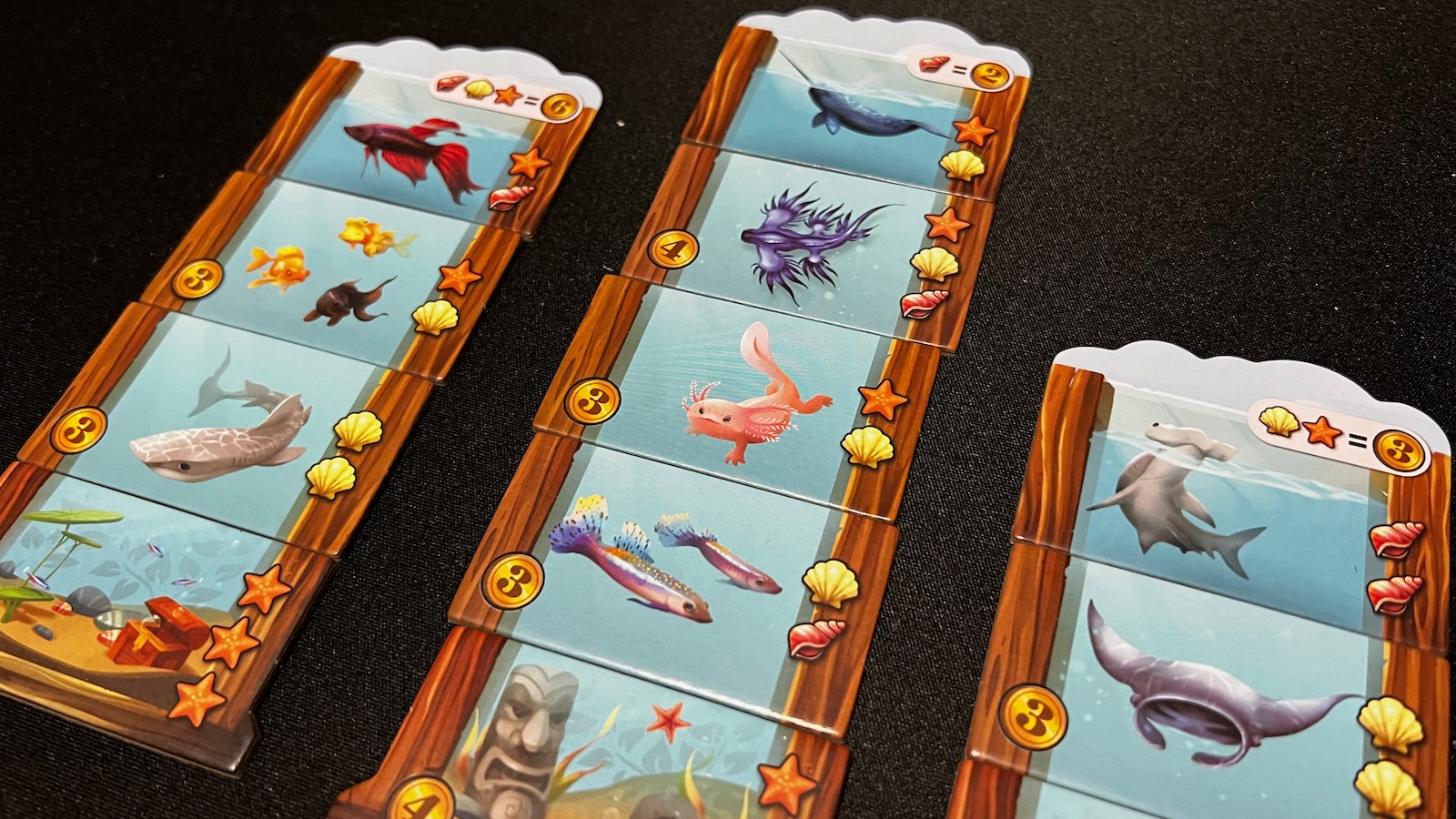 While used to buy and decorate different things in the game, the seashells also have special abilities that activate when discarded and each can be used multiple times a turn. Conches, which were actually skulls in the original design, allow you to add or subtract one from the value of a dice and multiple conches can be discarded every turn. I guess having skulls wash up on a beach could be traumatizing to the casual beach goer. Discarding scallops allows you to take extra treasures from a wreck your diver just visited. Placing a starfish can cover a treasure in the museum display and can count as any treasure needed to complete an exhibit.

The game ends when a single player reaches the exhibit threshold for the group’s player count. After that player has collected the end game triggering exhibit, all other players will get one final turn. Players will then calculate final scores by combining exhibit values, skull decorations, vault condition, and aquarium points. 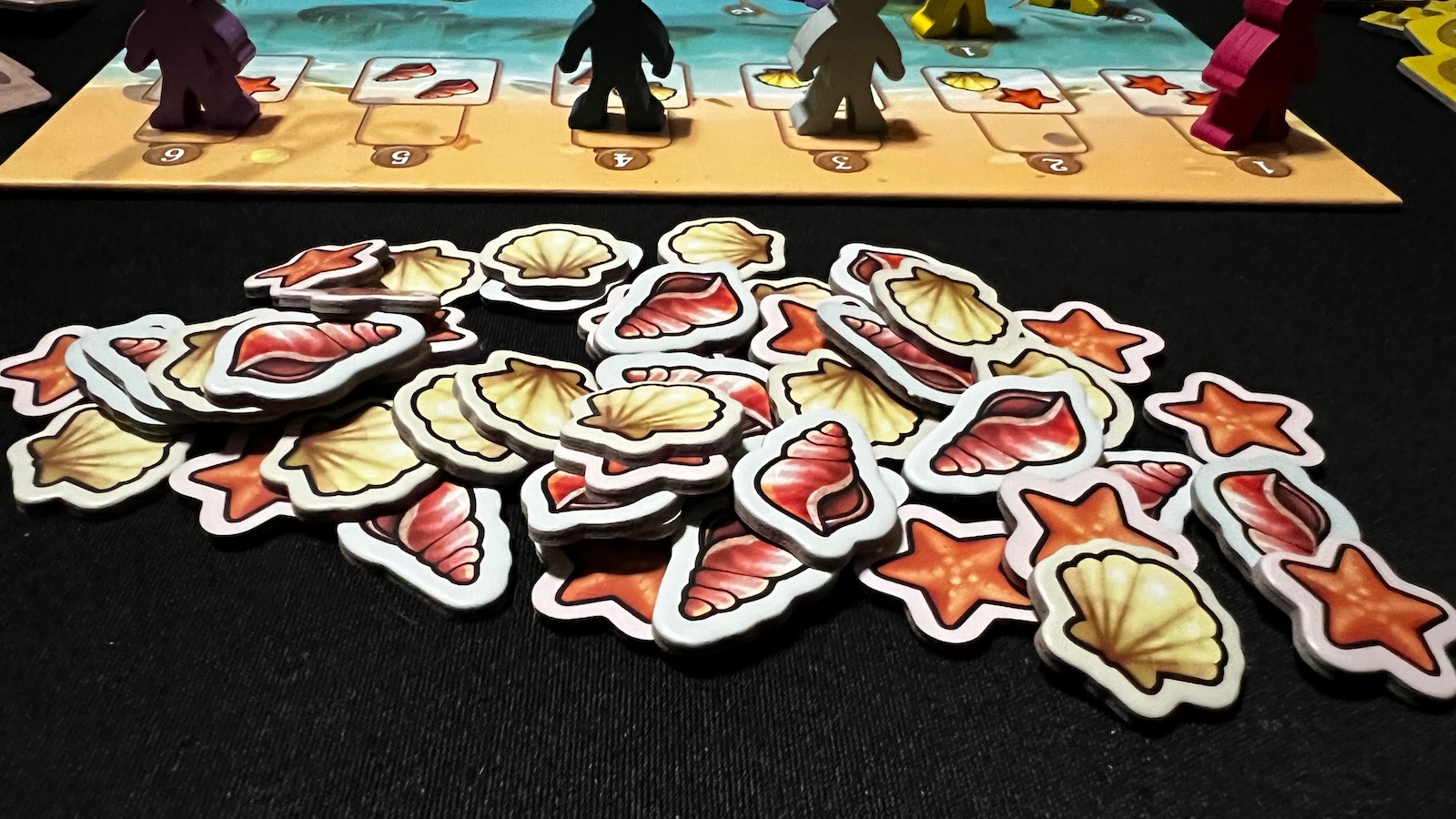 The visual aesthetic of Wreck Raiders is fantastic. The blues and greens of the water and the colorful treasure tiles and seashells pop off the table and really work with the theme of the game. Even the rulebook is colorful, easy to read, and fun to turn the pages. The production quality of the game is also very high. The cardboard treasure tokens, aquarium tiles, and seashell pieces are thick and who doesn’t love unique meeples, especially a crab that is used as a point tracker. The lid of the box is used to roll the dice pool, uses printed seashells to help players get bonuses, and provides the scoring track. 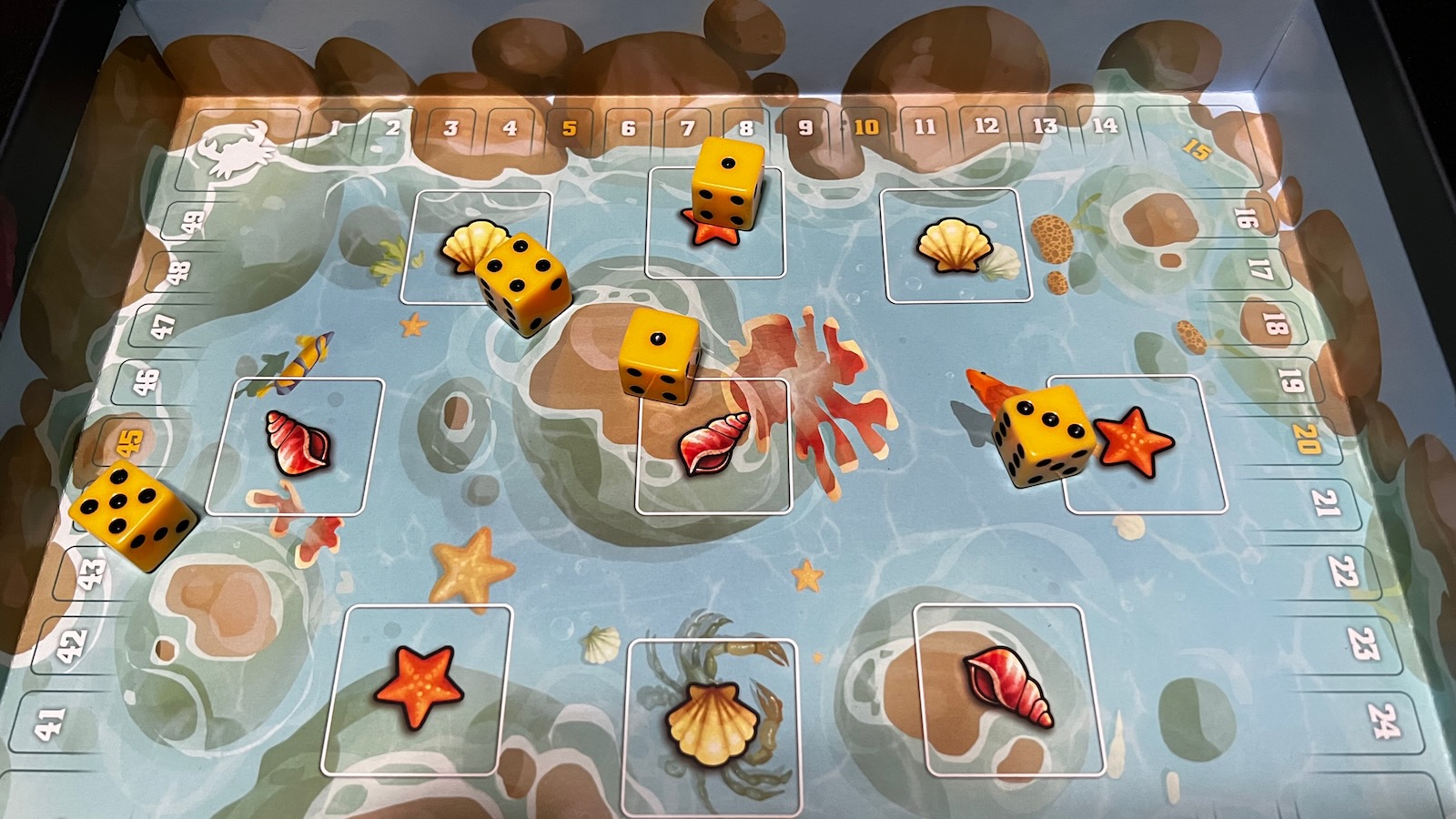 The gameplay is a mixture of dice drafting and worker placement. Players must monitor the board and maximize their turns. Placing one of your divers next to an opponent helps them and when forced to bump an opponent diver off a spot, they will receive the bonuses from the beach. Players must also be flexible with their strategy when an exhibit card they were aiming for goes away or they need to take a beach action rather than a wreck action. Playtime sat at about 45-60 minutes depending on the player count and a few times we felt like we needed a few more turns to get the strategy going. Overall, there was some good strategy and combos to keep in mind and the game was a lot deeper than initially expected when looking at the art and the 10+ label on the side of the box. 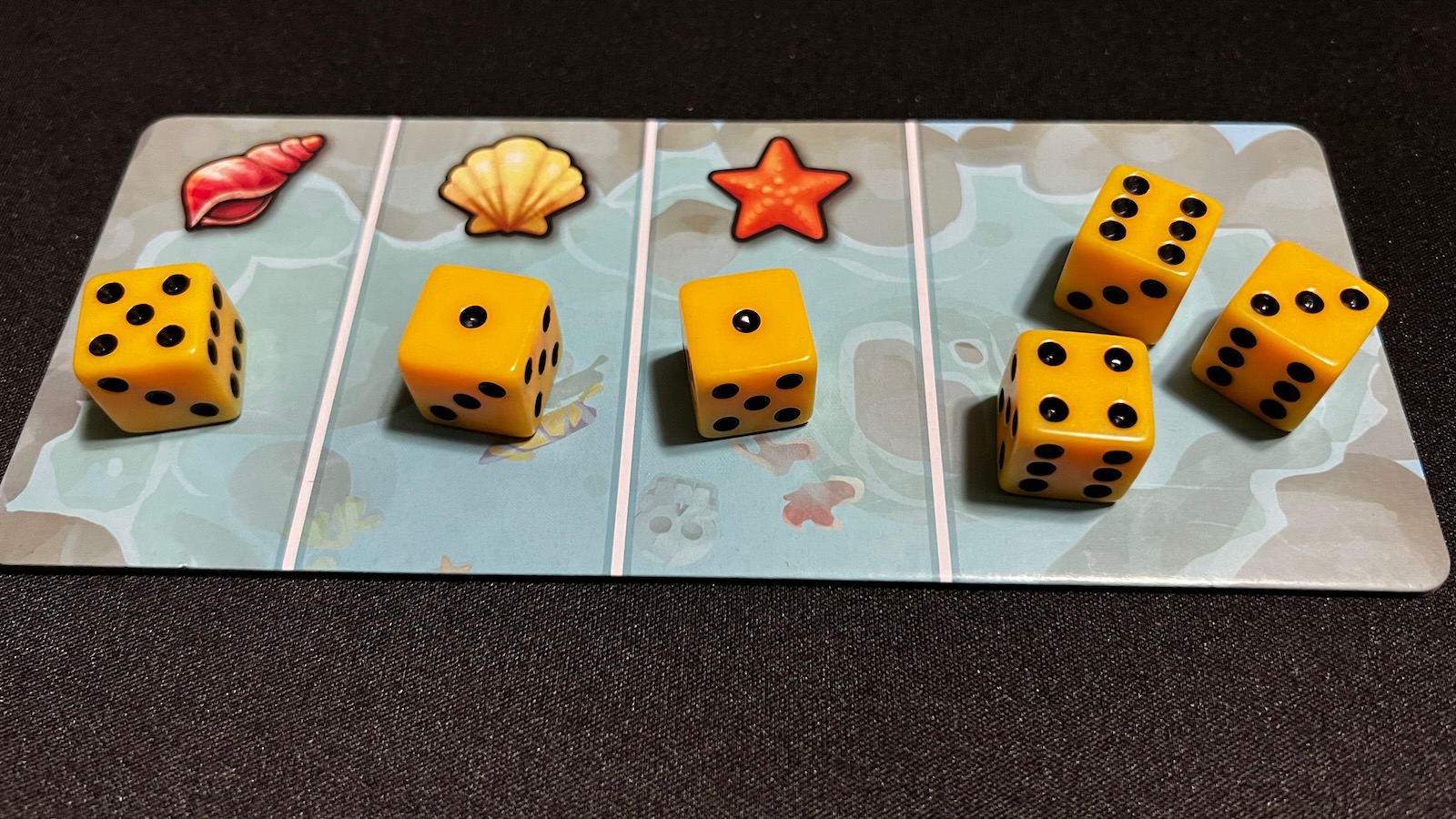 Dice are stored on the reef tile after being rolled. Players draft dice from this board.

Included in the game is a solo mode pitting your dive team against 18 other rival divers. Players take three consecutive turns but are not allowed to go to the beach. Rivals will then take turns using the remaining dice and some placement restrictions. After a full round, players can then buy an aquarium piece. The game ends when the vault is full, the player has claimed 6 or more exhibits, a wreck runs out of treasure tiles, all six beach spots are filled, or there are no rivals left in their supply. The player will then calculate their score and compare it to a chart of titles. The solo mode did not add much to the game, other than some practice with mechanics before teaching others and “beat your high score” solo modes rarely get me back to the table. Wreck Raiders also released some expandable content with their Kickstarter campaign in 2018 that featured extra ways to score points through secret objectives and giant clam pearls and a shark that terrorized divers and sent them back to their owners. 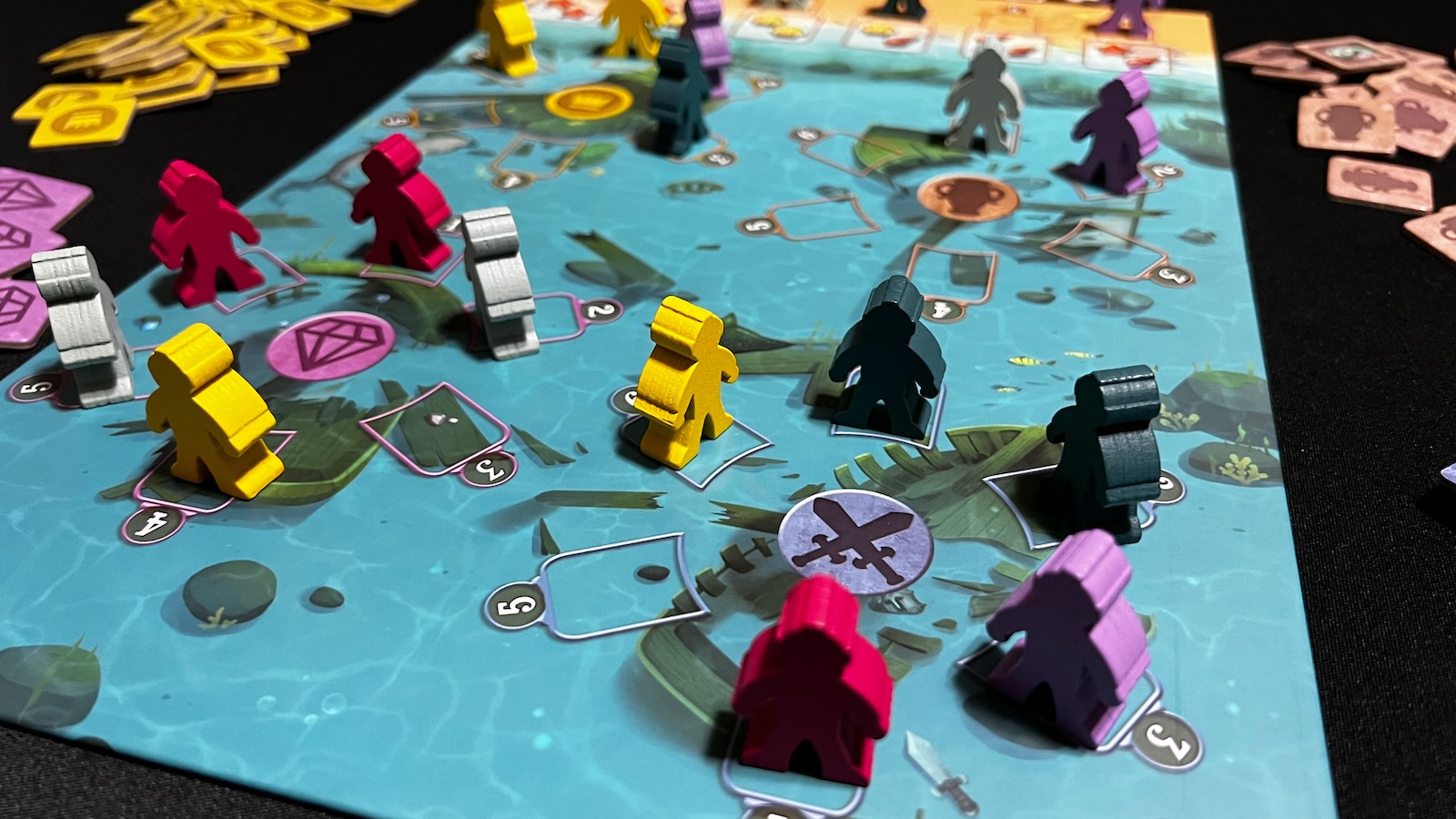 Divers visiting various wrecks with treasure tiles on the side. The beach is also being visited by some divers.

This game falls into an interesting category for me. The strategy, as mentioned before, is deeper than the aesthetic and feel of the game would let on. Players really have to strategize and maximize their points based on the movements of the players around them. A friendly local game store owner said he wouldn’t know how to market the game. He said, “It’s a little too deep of strategy to sell to a family and I’m not sure I could convince hardcore gamers to bite with the artwork and aesthetic.” That being said, I really enjoyed the game! It hits the right spot for me if I was taking someone to the next level of board games. This is a great gateway game to get those friends who are stuck in the classics into more modern strategy board games.

With a strategy that is deeper than the cover art lets on, Wreck Raiders is great for the group looking to break out of the old classics and into something new. The dice drafting and worker placement mechanics, combined with multiple options for scoring, made this an enjoyable game each time it hit the table.