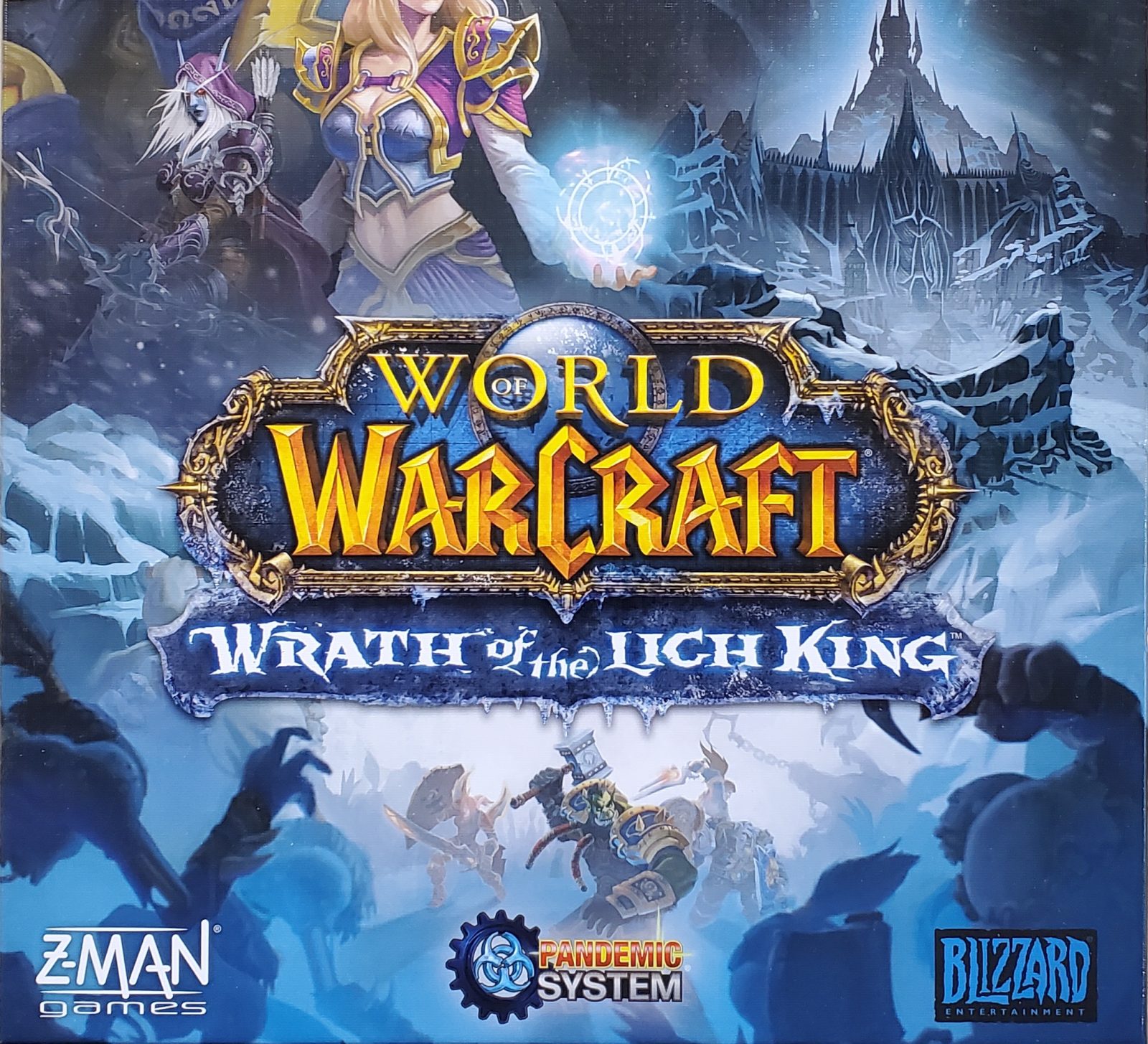 I was underwhelmed and disappointed: it’s just way too easy.

I wanted to like World of Warcraft: Wrath of the Lich King (WoW:WotLK) – I really did. I love Warcraft. I played Warcraft: Orcs & Humans when it first came out. I remember the early days of Warcraft II online play via Kali. I downloaded the original Warcraft III mods that gave rise to the Tower Defense and Multiplayer Online Battle Arena genres. I subscribed to World of Warcraft back before even Burning Crusade came out. I participated in a campaign for the 3rd Edition Dungeons and Dragons Open Game License Roleplaying Game adaptation by White Wolf Studios. I even own the board game A Small World of Warcraft, which I don’t get to play anywhere as much as I’d like.

The aesthetic, visual, and material design is great. The miniatures are far above the quality I’d expect from a Pandemic game, which normally just has acrylic cubes and plastic pawns, and are easily worth painting. The cards, board, and tokens are all really nice and really tap into Warcraft’s unique design aesthetic. But you don’t buy games just to look at them. 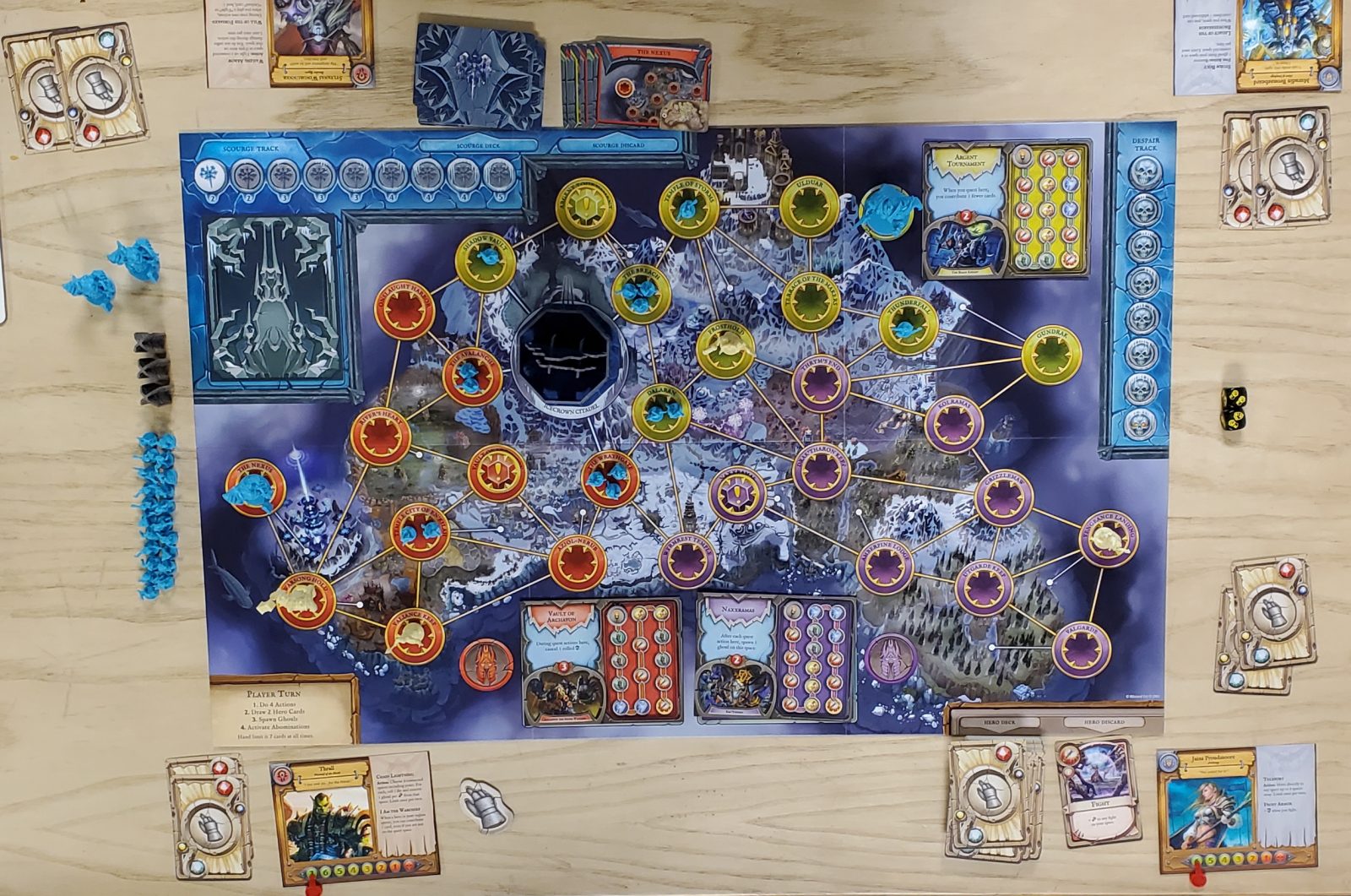 The game play is fundamentally similar to most Pandemic games: you perform 4 actions, draw 2 hero (player) cards, draw a Scourge (infection) card and place ghouls (disease markers) on the matching space, and (unique to WoW:WotLK) activate abominations. Abominations are created instead of doing an outbreak when there are 3 ghouls already on a space and you would need to place a 4th ghoul. Abominations are technically harder to remove from the board than ghouls and, when they activate, they will move one space and try to attack nearby heroes (for 1 damage). In practice, it’s not terribly difficult to eliminate or out maneuver abominations, particularly given all the movement and damage abilities available to players.

As opposed to automatically removing a disease cube in Pandemic, in WoW:WotLK players engage in (easy) combat with ghouls and abominations in the spaces they occupy as an action. A player performing an attack action rolls two dice which generates 0-4 damage and 0-2 defense. Hero cards and hero powers may be able to add additional damage or defense. Each point of damage can remove one ghoul. Three points of damage (in one attack action) can remove an abomination. Any surviving ghouls and abominations do one point of damage back to the player’s hero. Damage done to the hero is reduced by one for each defense the hero rolled, and hero cards and hero powers can be used to increase the defense or otherwise mitigate damage. 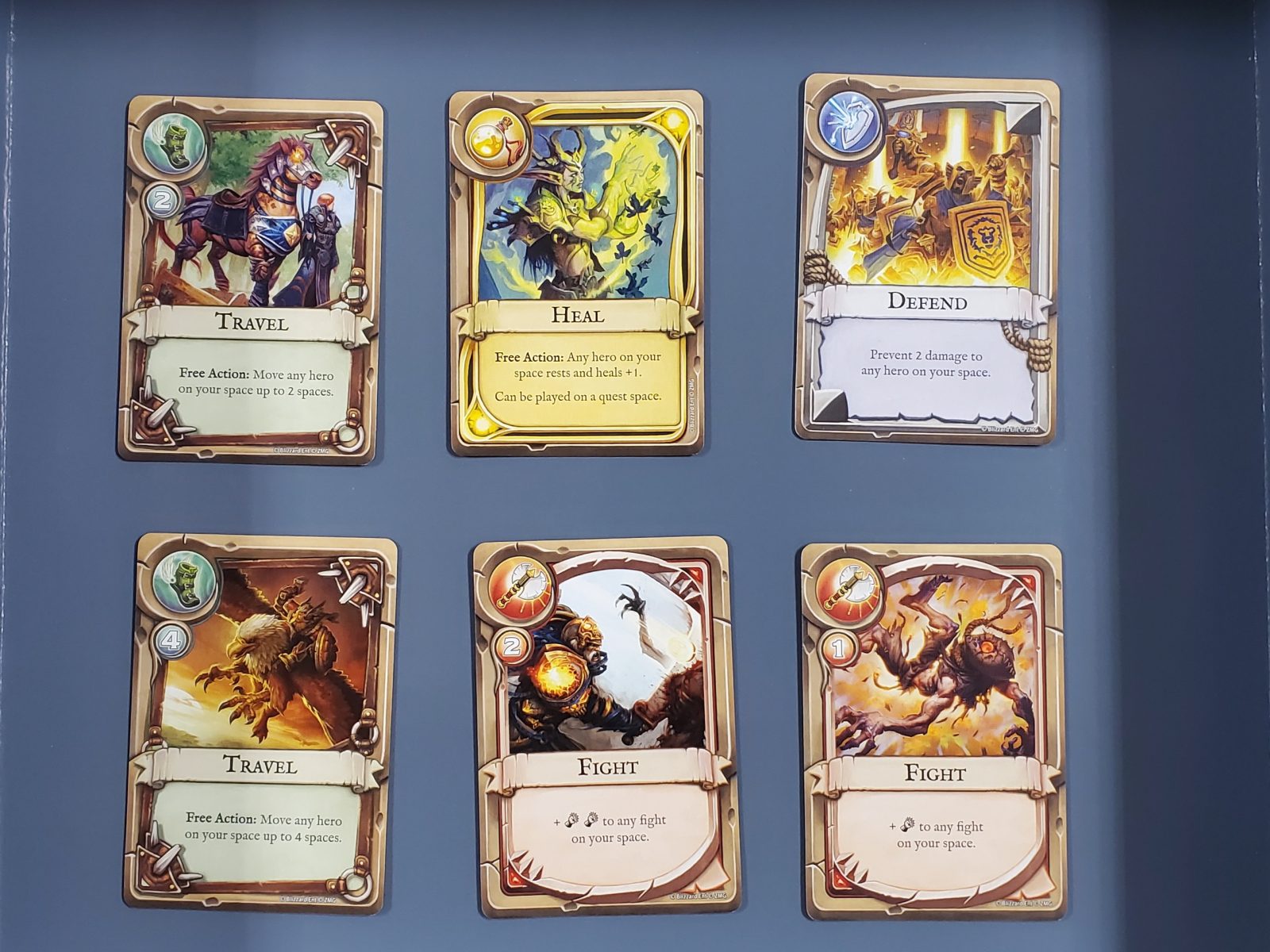 Since hero cards can be used *after* rolling dice, it’s pretty easy to optimize their use: you know exactly what you’ll need to meet whatever values you are looking for – and that’s before taking into account hero powers or reward cards from quests. There are hero powers that can attack at range, attack multiple targets, reroll dice, automatically remove ghouls, convert die symbols (you don’t need to defend against attacks if you kill the ghouls first!), etc.

Even if you do take damage, hero health is pretty generous (6-8 points). There are also both a rest (healing) action and a Heal hero card that can restore lost health. I don’t think I played any game where anyone was really, seriously worried about their hero hitting 0 health.

In order to win, instead of spending (discarding) a matching set of player cards to cure 4 diseases, WoW:WotLK has players working to complete 4 quests. 3 quests (1 per colored region) are random picked from a pool of 9 quests – 3 potential quests for each of the 3 different board regions. The fourth quest is always the same: Icecrown Citadel, where you face down The Lich King. Each quest has a quest track that is advanced by players rolling dice or contributing (showing from hand) hero cards to advance the tracker. If the quest isn’t complete, the questing hero suffers damage equal to the damage indicator on the quest card (2-3) less any defense symbols the hero rolled. When a quest is completed, the hero who completes it gets a random reward card that can have a wide variety of powerful effects.

Of note, every hero on a space with a quest can contribute 1 hero card to the quest action of any hero on that space, and contributing a hero card is just showing that the card is in that player’s hand. The way contributing works can potentially make it easy to power through quests as hero/player cards are not lost. As a result, unlike base Pandemic where the game gets harder when you add more players, WoW:WotLK can actually potentially be easier at higher player counts than lower player counts in certain circumstances.

The last mechanic I want to touch on are strongholds. Strongholds, roughly equivalent to research stations, are kind of ridiculous; and not really balanced by the fact that they can only be placed when a stronghold hero card is randomly drawn from the hero deck. Heroes resting at strongholds get a bonus to health recovery and any hero can spend 1 action to move to any stronghold from anywhere on the board. While the default settings give you three strongholds in the hero deck, even one well-placed stronghold coupled with hero move abilities and hero movement cards can pretty much trivialize movement across the entire board.

WoW:WotLK is pretty and it has a solid core (Pandemic). Unfortunately, the game is also just way too easy. Much like the original Pandemic, you can bump up the difficulty: you can increase WoW:WotLK’s difficulty up to Mythic (Heroic) with 8 “The Scourge Rises” (epidemic-esque) cards (each of which moves the Lich King and adds up to 3 ghouls and an abomination to a space) and reduce the number of Stronghold cards in the hero card deck from 3 to 1. There are also 9 quests, 3 per region, and you can hand choose which quests you face along with which heroes you choose to use each game in order to try and maximize the challenge facing you every game. However, even then, WoW:WotLK is still not what I would consider really hard, and you only really kinda get a challenge by limiting yourself to only a very extreme subsection of the content the game offers.

If you or your friends are really into Warcraft, and you aren’t particularly familiar with or good at board games, you could potentially maybe get some decent mileage out of this. Otherwise, I think most people who pick this up are probably going to be somewhat to very disappointed by it.

World of Warcraft: Wrath of the Lich King

WoW:WotLK is Pandemic yet again, but this time way, way easier. Excellent miniatures and what could have been cool mechanics like hero cards and quests feel wasted on a game that seems like it has a trivial level of difficulty on all but the hardest of settings and when harshly restricting most player character and quest options.

Dick Marshall’s love affair with gaming started when he was young, and never stopped. Some of Dick’s earliest memories involve playing chess with his dad and playing Missile Command on the Atari 2600. In a former life, Dick worked as a System Administrator, Software Developer, and Manager - among other things.
Related Articles: Tabletop, World of Warcraft: Wrath of the Lich King
Share
Tweet
Share
Submit