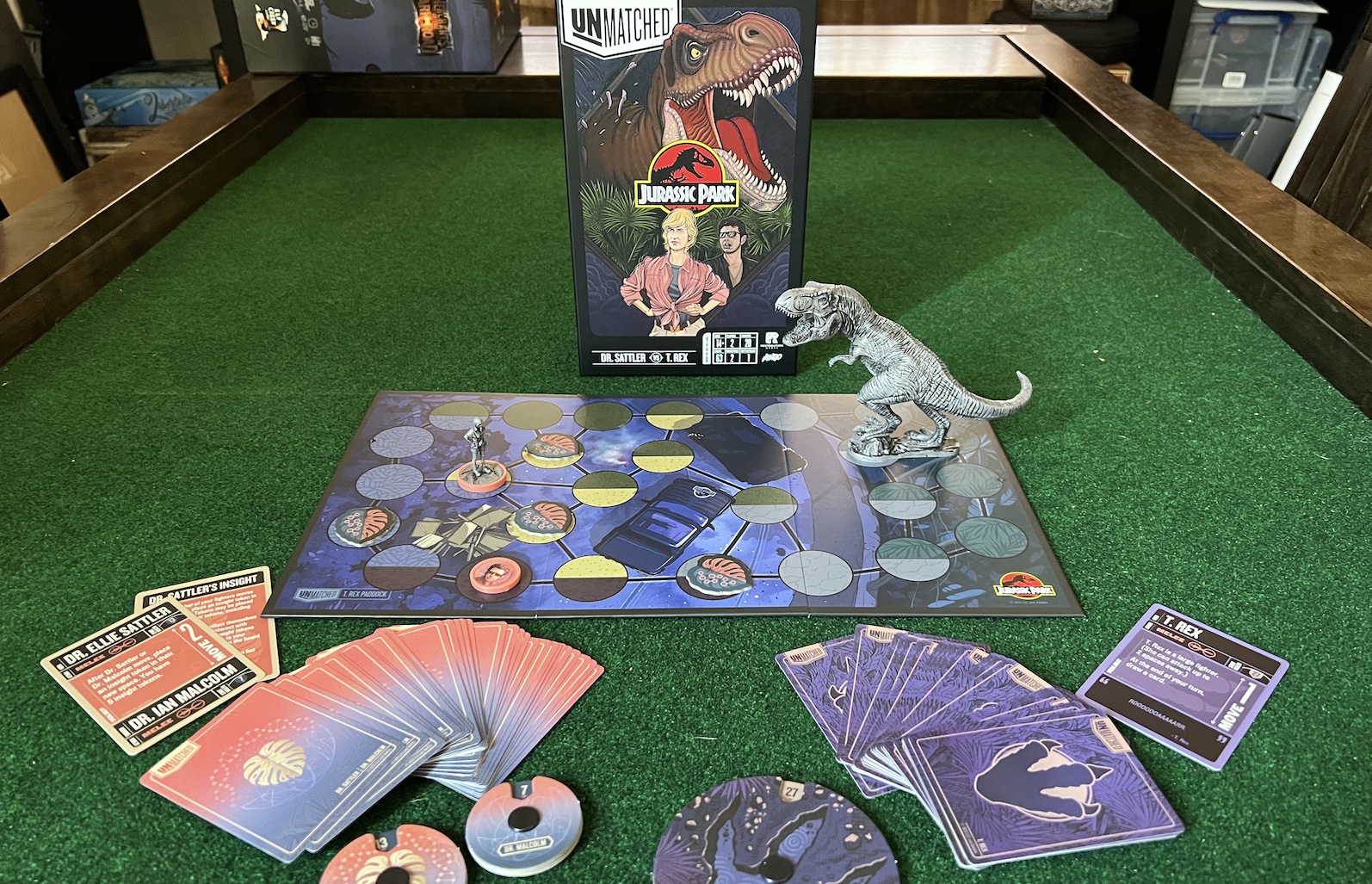 The first thing I did when I got home with my copy of Unmatched: Jurassic Park- Dr. Sattler vs. T. Rex was run around the house with the T. Rex mini and have it mock bite everyone. I don’t care how old you are or where you land on the gender spectrum on any given day, there’s something to be said for owning an oversized dinosaur mini (alternatively, if you get the deluxe edition, there’s something to be said for owning a shirtless Jeff Goldblum mini). 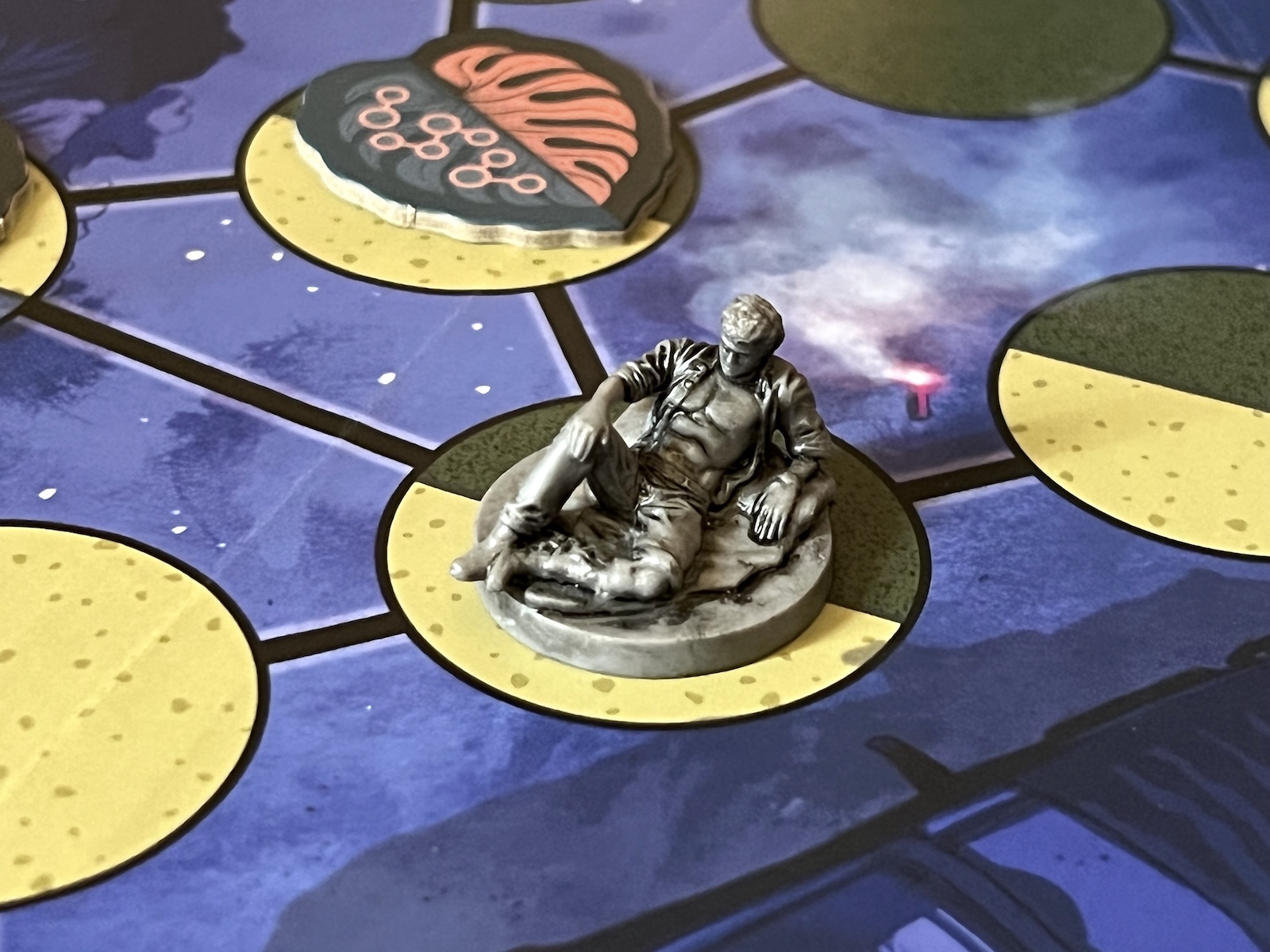 Fittingly, the T. Rex stays big in actual gameplay. The mini itself occupies an extra space, and brings along extra melee reach, able to hit opponents two spaces away, bypassing the standard adjacency requirements. She also sports an oversized health dial that starts at 27, making standard mid-teens health dials look like snacks. If that chunky health pool makes her look like a tank, she’s definitely a lumbering one, with an equally intimidating  movement value of one. The T. Rex’s last special rule gives her an extra draw at the end of her turn, which initially seems like a blessing, but considering that pitiful movement value, you’re going to have to take a fair number of maneuver actions, putting you at risk of running out of cards and “decking” yourself. 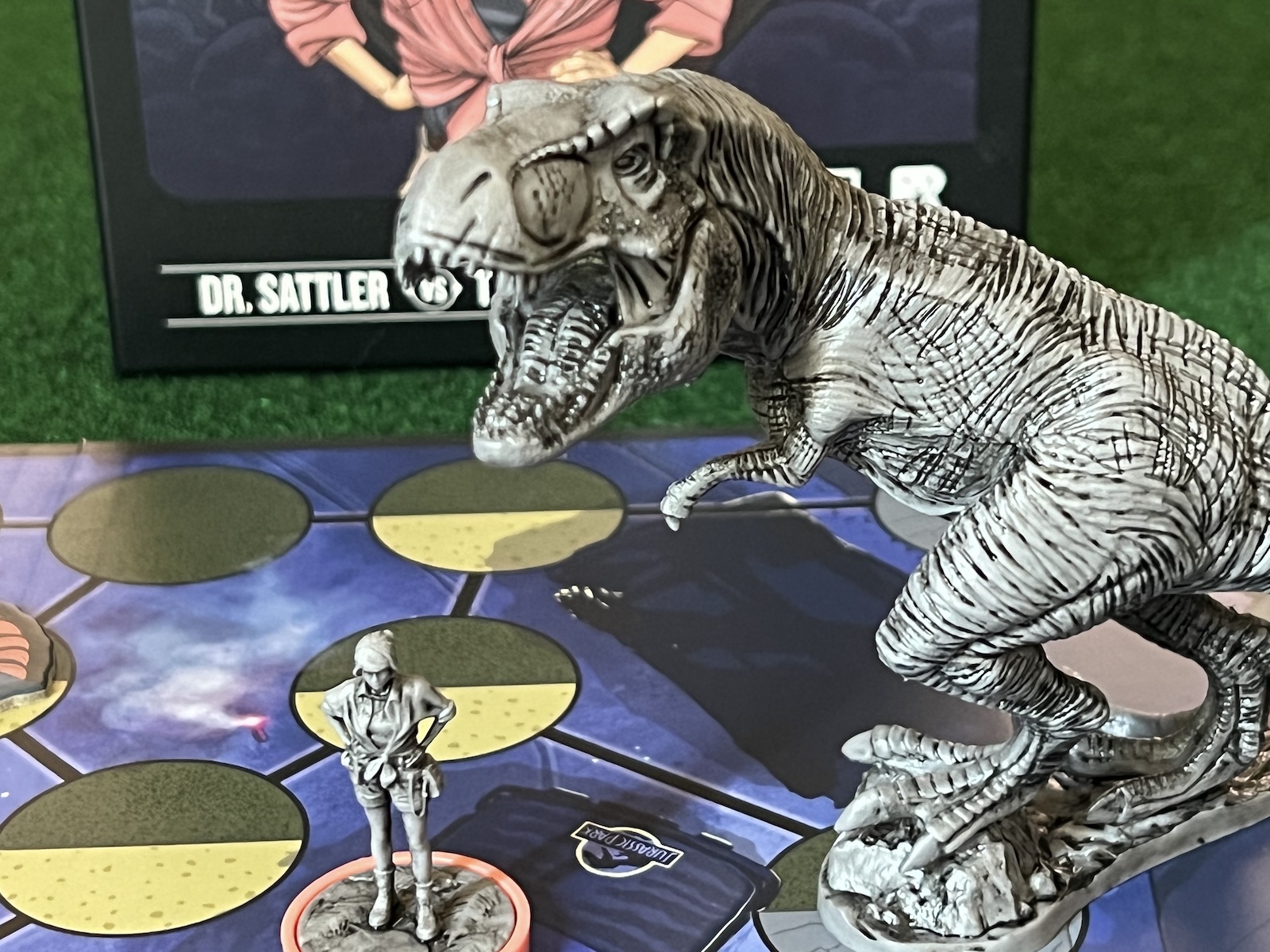 That isn’t to say that she’s left twiddling her thumbs  in her corner, since her deck features a few placement effects that teleport her across the map, along with several schemes to bring those cards back in hand, but those are still a limited resource, and you will get left in the dust if you spend them flippantly to go all “big dinosaur smash little lady”, especially taking into account that a lot of T. Rex’s big swings require boosts to really hit home, so you’ll wind up churning through even more of your options if you don’t approach playing her with an opportunistic patience.

If you’re staying within the box, you’ll learn that lesson quickly, as Dr. Sattler’s mechanics play perfectly into punishing an overly aggressive T. Rex pilot. Whenever she and/or her sidekick, Ian Malcom, move, they can drop an insight token onto their new space.  These have various interactions with the good doctor’s cards, the most generic being wiping them from the map to heal or hit like a truck. The long and the short of it is, unlike most melee characters, Sattler is rewarded for taking maneuver actions, and given the extra movement in her deck, Dr. Sattler can kite the T. Rex around the map for more than long enough to deplete any but the most patient player’s resources. 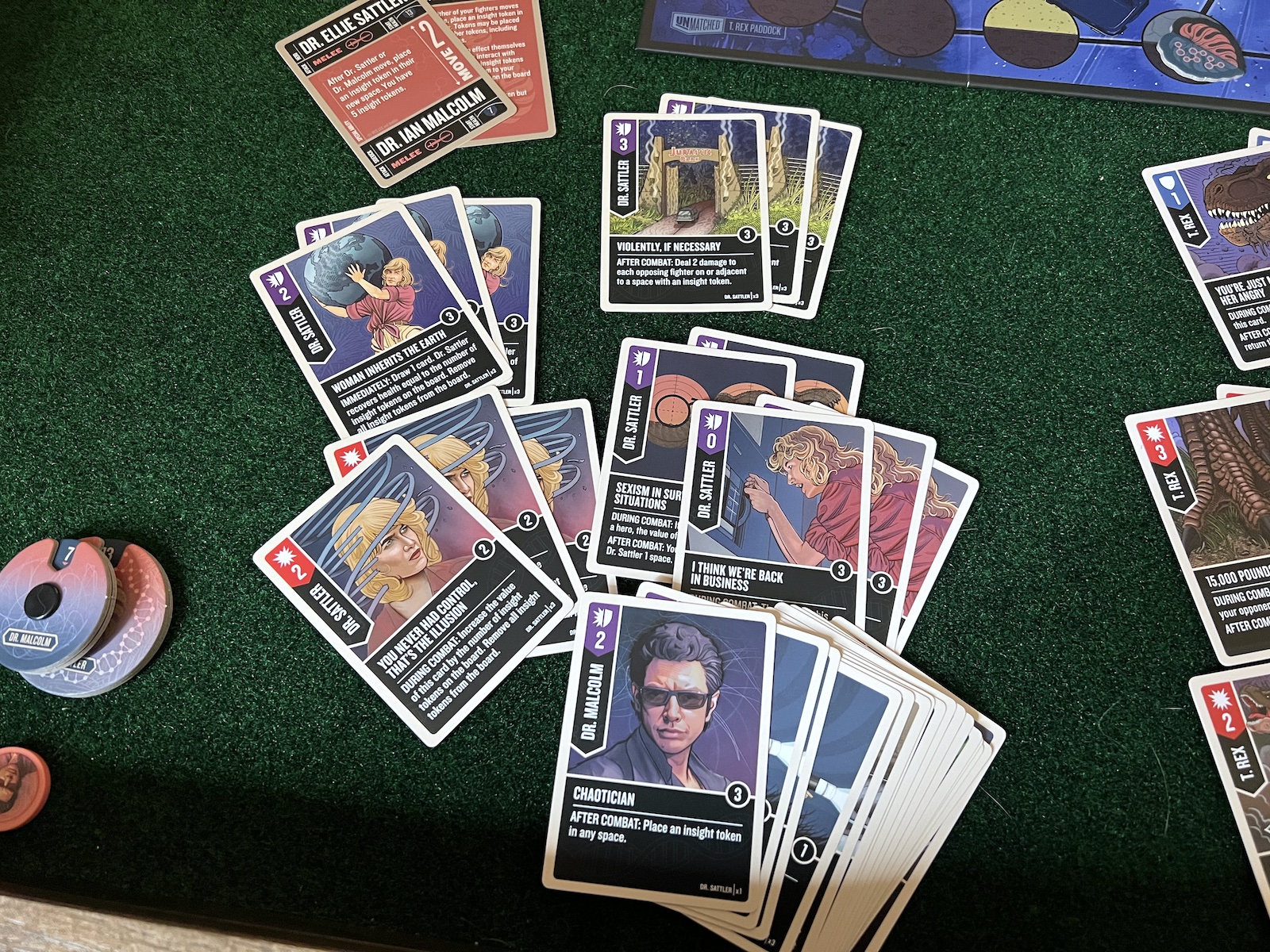 Out of the box, however, both T.Rex and Sattler have strengths and weaknesses that the other hero fails to highlight. Since the T. Rex has no feints, against other fighters, Sattler has to actually play around possible feints, instead of just jamming out the high-payoff combat cards whenever she’s placed all her tokens. But when you’re playing Dr. Sattler against a hero with a bevy of sidekicks that tend to turn maps into obstacle courses, her ability to teleport to any insight token or just do two damage to every enemy adjacent to one becomes invaluable. Against ranged heroes like Robin Hood that are always on the move and can feel impossible to pin down, Sattler’s deck full of extra movement can and will make the difference between being able to get that pivotal last melee attack off and your quarry getting away to fire a few more shots off before you can close the gap again. Flipping that on its head, the sheer volume of post-combat movement that Dr. Sattler’s deck contains will allow you to duck out of melee with someone like bigfoot who can and will take a big chunk out of your health dial given multiple attempts.

Similarly, T. Rex’s two-space melee reach effectively shuts down the standard ranged hero versus melee strategy of simply having sidekicks bodyblock enemies from being able to attack their hero, and a well-timed thrashing will not only clear out pesky outlaws, but has a real opportunity to almost entirely shut down Sun Wukong by killing off all his clones with one defense card. While losing a good chunk of his outlaws will definitely hurt Robin Hood, his ability to always be on the move while simultaneously never having to get in close will frustrate even the most patient T. Rex player, because that move value of one can and will be absolutely crippling against heroes like Robin Hood who can effectively exploit it by being both ranged and mobile. 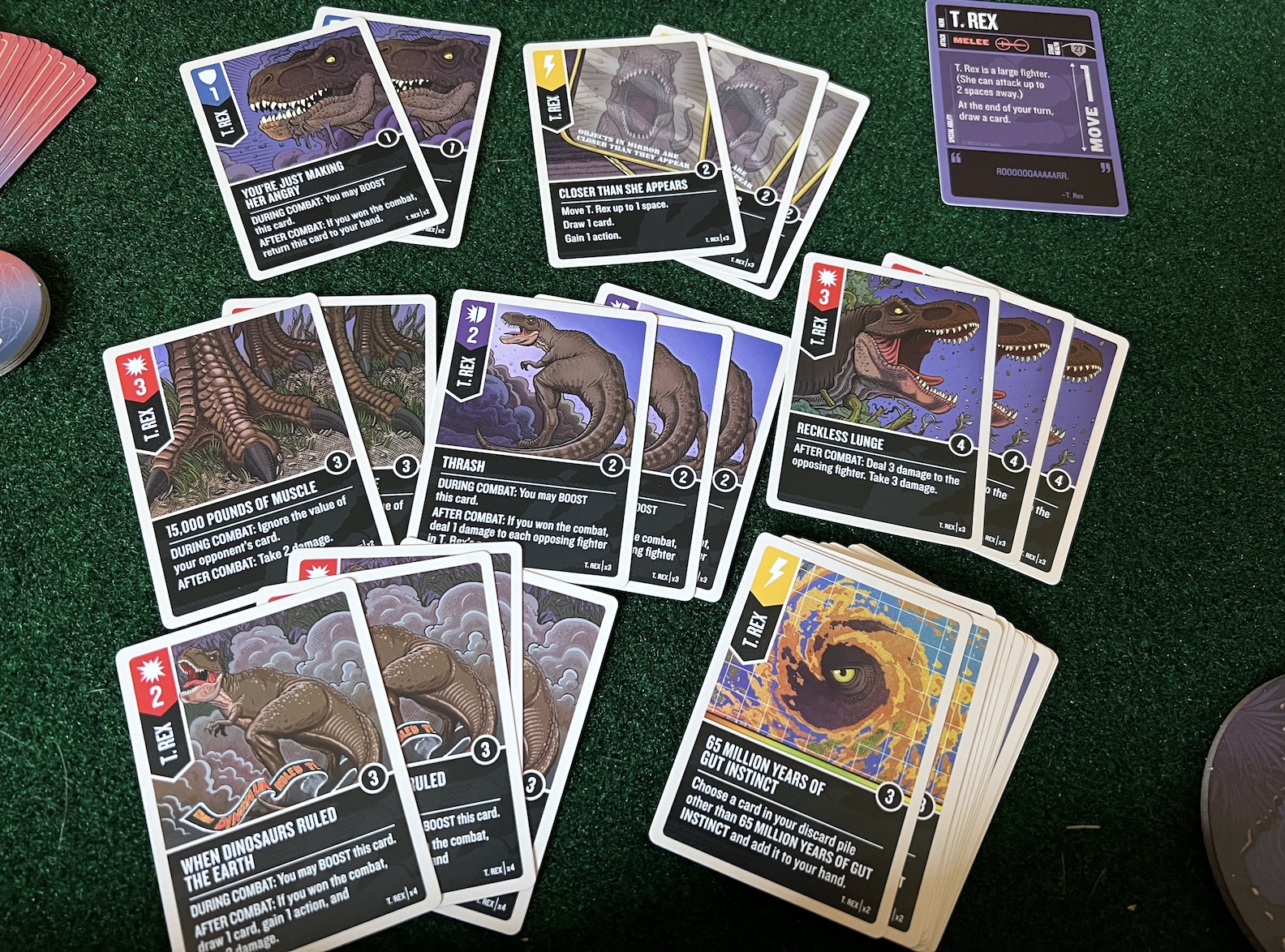 All that said, the core concept of Unmatched is mixing together a lightweight tactical minis game with a hand management and bluffing game for pure, simple fun, and Restoration Games hasn’t  deviated from that winning formula for this box. Granted, any given session of Unmatched has the possibility to not work out quite right and prove to be a frustrating experience, but games are short enough that that frustration should be short-lived, and if you can’t glean even some small amount of fun from stomping a big ol’ dinosaur around a map, I don’t think we can be friends.

Unmatched: Jurassic Park- Dr. Sattler vs T. Rex is another great entry into the series, but this one has a T. Rex. Cue .gif of Hulk yelling "big monster!" In Thor: Ragnarok. Need I say more?

Nick grew up reading fantasy novels and board game rules for fun, so he accepted he was a dork at an early age. When he's not busy researching the intricacies of a hobby he'll never pick up, Nick can be caught attempting to either cook an edible meal or befriend local crows.
Related Articles: Tabletop, Unmatched
Share
Tweet
Share
Submit