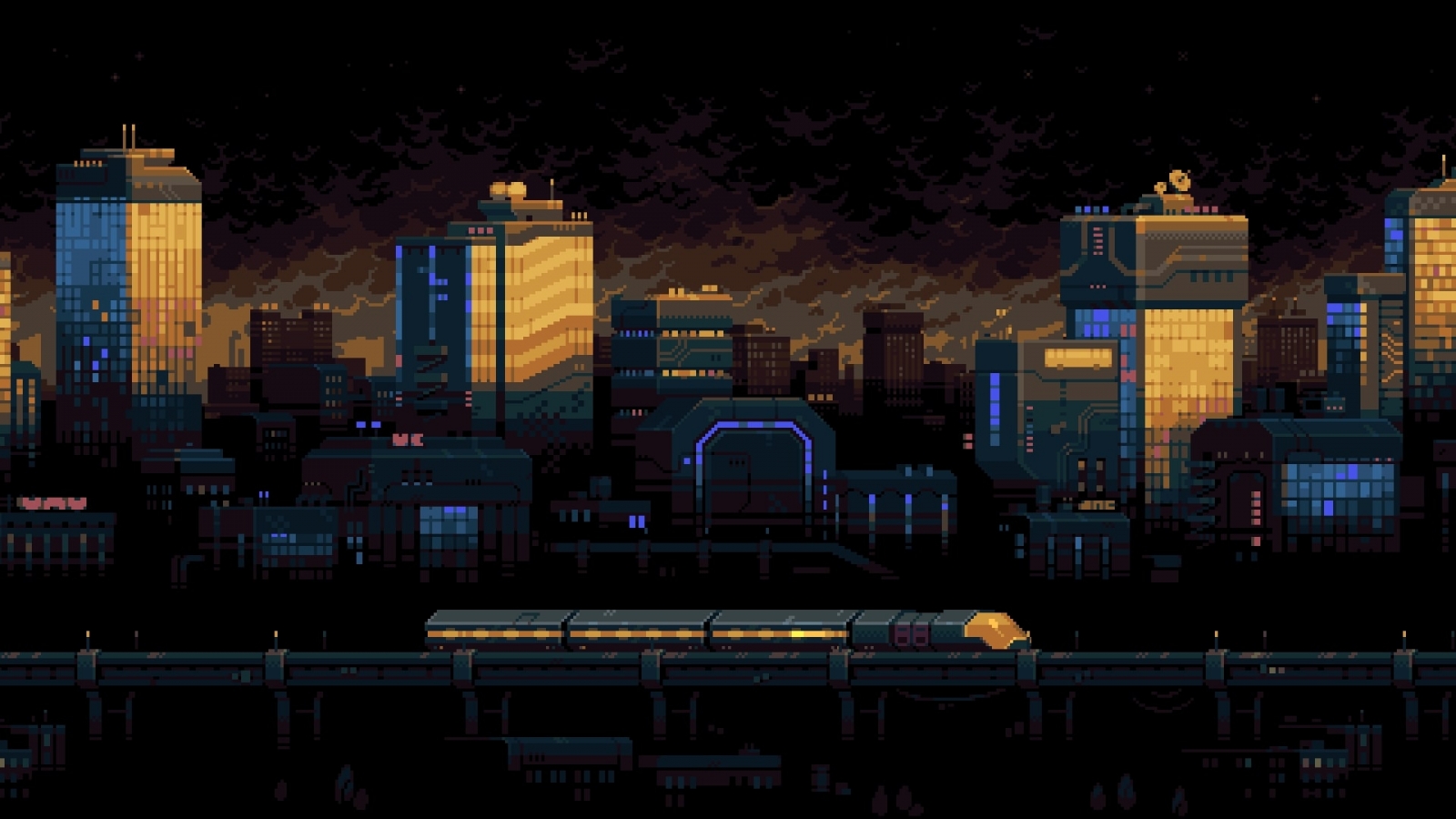 There’s no worse place to lead a virtual life than the mega corporation-run dystopias of the cyberpunk genre, though our morbid curiosities get the better of us each time. But the more the merrier says the team behind Disjunction, blessing us with a whopping three tortured lives to live out instead. First up to the proverbial plate is Frank, a private investigator with a bone to pick with the city’s elite. He’s flanked by Joe, a boxer fighting to avenge his daughter, and Spider, a hacker who’s left their past behind. Their motives differ, but their goal is the same: hold the bigwigs’ feet to the fire, and take out a few hundred guards and gang members in the process.

Disjunction presents the grimy, gritty aesthetics of the genre with a certain degree of cleanliness and elegance that directs every facet of the game from its pixel art and synth-driven soundtrack, to the smooth stealth-focused gameplay. It’s undoubtedly a polished game — one free of any rough edges and unnecessary features that would muddy the waters. But just as it avoids spotlighting any obvious blemishes, its surprising lack of variety, despite its three playable characters, gives way to tedium.

In futuristic New York, a city that’s made crime and conspiracies its top exports, peace of mind doesn’t come cheap. Our three one-man armies, each battling their own ghosts, have questions that need answering, but only the top dogs behind the city’s sleaziest gangs and corporations have what they need. Following their own breadcrumb trails eventually brings the trio together; they join forces to put an end to this 7-hour cat-and-mouse game and deliver their brand of justice — one meticulously laid-out building at a time. 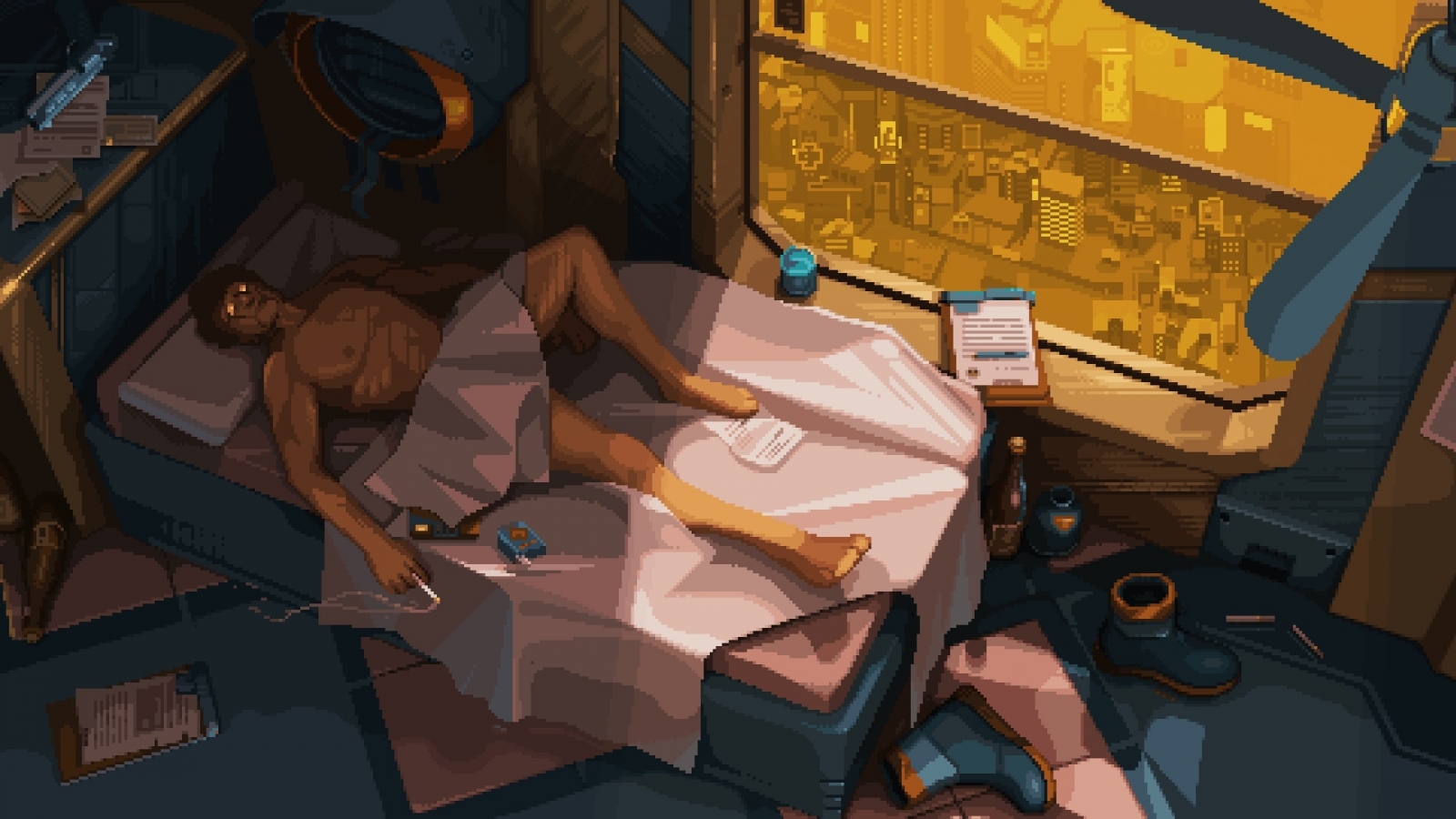 The early bird catches the corpo.

Every level is a top-down, room-clearing extravaganza where careful planning and fast execution are rewarded. Areas are broken up by floors, each one featuring a single one-use checkpoint. Each level also hides away an upgrade pod on one of its floors that can be used to beef up characters’ abilities. Other goodies include optional lore-centric collectibles, health and energy recovery items, and keys that are needed to unlock gates impeding your rampage.

Infinitely more pressing are the game’s meticulous enemy placement and patrolling patterns. Enemies, of which there are many, patrol rooms in hopes that a vigilante like yourself stumbles into their vision cones. Certain enemies, namely bots, have unique vision cone patterns that need to be learned. Like any solid stealth puzzle, observing these patterns and squeezing through any openings are the key to success. No ability is more important than your character’s crouch, which muffles your footsteps and reduces the size of enemy vision cones, provided you’re hugging a wall or object. Then comes your melee, which lets you dish out damage from the shadows — just make sure you hide the bodies out of sight.

The three bring along their own unique kits to complement stealth, but claustrophobic level design seldom lets any of their quirks shine. Characters have varying health and energy capacity, abilities, and weapons, but the absolutely punishing damage dished out by the herd of enemies obscures most of those differences. Enemy behavior and placement ensure that stealth takes precedent, usually providing a few golden paths through each level with fairly limited opportunities for interesting approaches. Make one wrong move, or let out one loud sound, and an army of bots and foot soldiers will send you back to the start of the level. 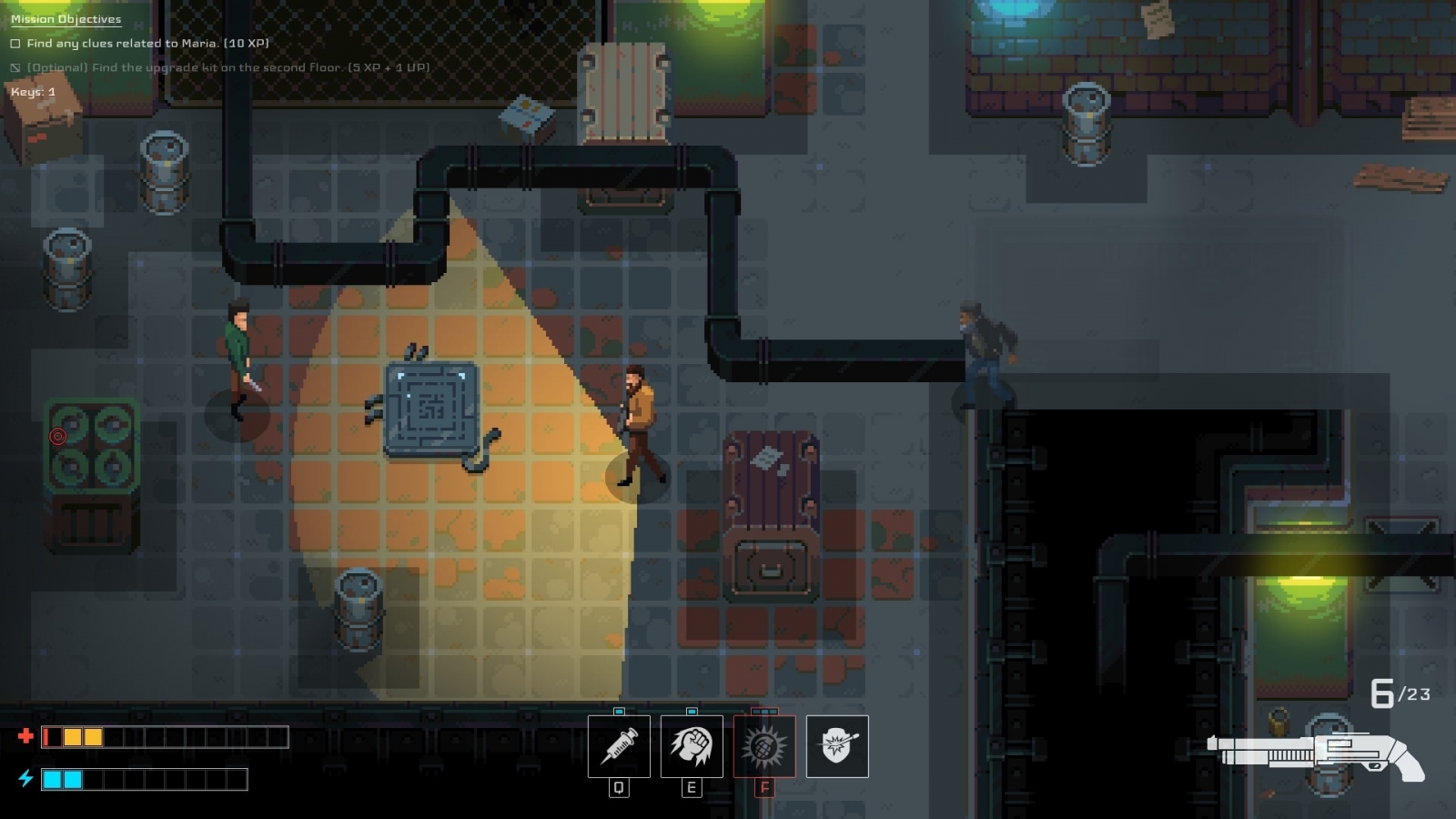 This is especially true when going for a no-kill run, which is almost mandatory when considering the nature of the stealth in the game. Using characters’ guns makes for a few easy kills at the cost of alerting the entire room to your location, after which I was consistently melted in half a second. Finding room to use your gun gets harder and harder over the course of the game as more enemies begin packing each room. In its latter half, the limited checkpoints, absurd enemy count, and the energy scarcity had me sweating every time I entered a new room. Disjunction gets challenging extremely quickly, and that challenge never lets up for a second.

Though its stealth is far more restrictive than I would’ve liked, weaving through floors like a ninja is an undeniably smooth experience. Trailing a guard, giving him a good whacking, then dragging the body away is as satisfying as it is intuitive. Doing it while narrowing avoiding detection, even more so. Disjunction is easy to learn and quick to master, but this comes with its own issues when the game has no answer to the growing monotony in its later levels.

Separating levels are healthy servings of story told through text. The dialogue ranges from short and sweet to intimidatingly wordy, and that’s without counting the lengthy optional explanations for the game’s more significant terms. Even your dialogue choices are hilariously long, though their impact on the narrative at large is minimal. My anti-reading rhetoric aside, the ability to learn more about highlighted terms is an extremely useful feature that I found plenty of use during my time with the game. There’s a solid story to be told, but it’s often dissociated from the bulk of the gameplay. 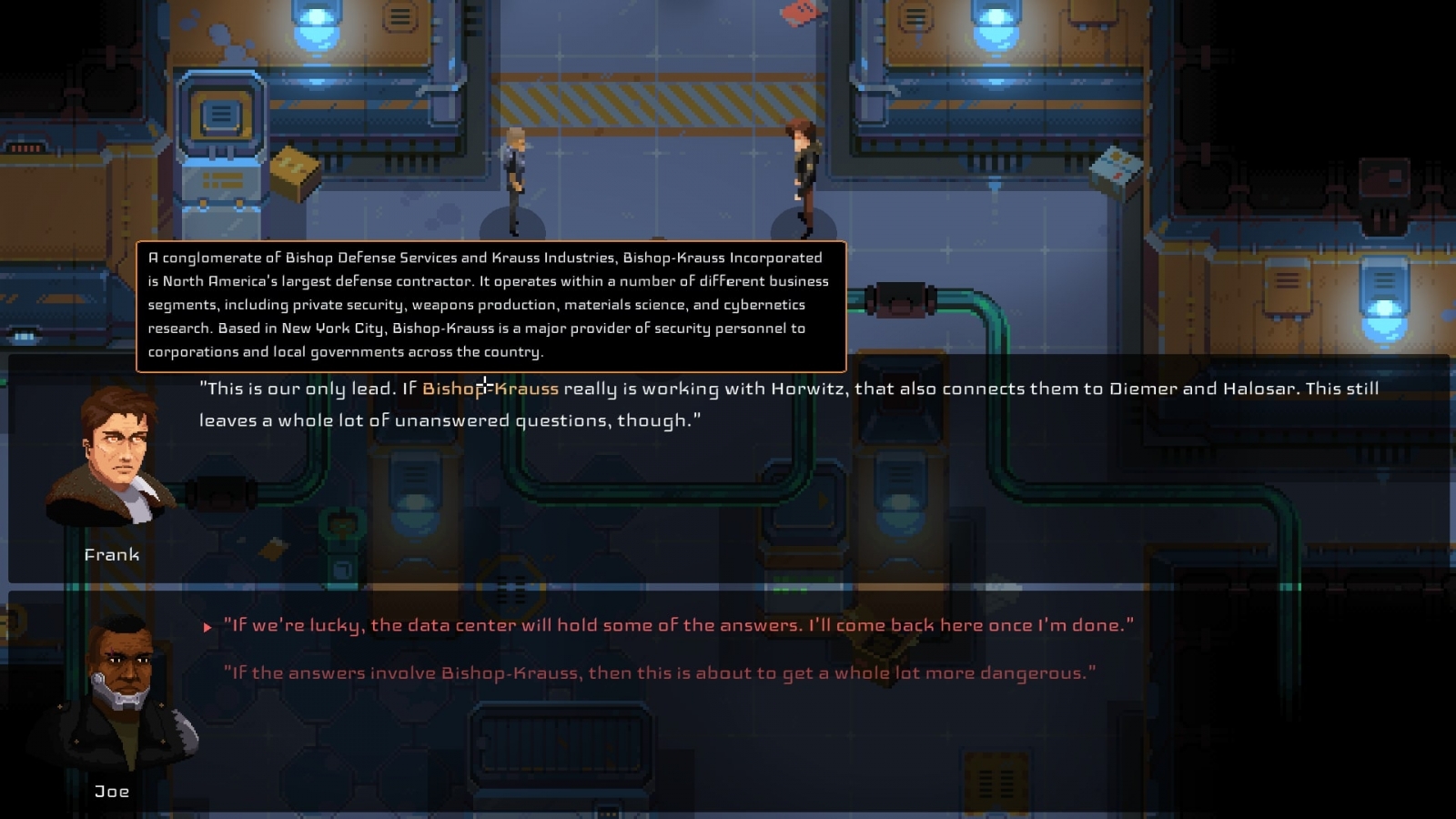 After playing catch-up on the phone, you’re given the opportunity to upgrade whichever character’s next in line to rumble. Ability upgrades cost upgrade pods, and only one upgrade for each skill can be used. You can also spend XP accrued over the game to boost characters’ passive stats, including stealth movement speed and damage. I found some upgrades to be infinitely more useful than others, and some stat buffs instrumental to success. There’s not much to play around with, but anything that could give me an easier time was certainly worth my while.

Beyond trialing new dialogue options and gunning for other endings, there’s not much keeping you going after the first playthrough. The simple, elegant stealth gameplay is inarguably the main attraction, though a lack of diversity in the level design invites tedium. The story and progression are neat additions that spice up the experience, albeit forgettable in the long run. Disjunction is a polished game through and through, but it’s without any interesting ideas or novelties to differentiate it from a sea of cyberpunk-inspired games.

Slick, intuitive stealth gameplay serves as Disjunction’s backbone, though the supporting systems and level design could do more to lighten its burden.

A self-deprecating, overly sarcastic pair of glasses that occasionally possesses a human host in order to partake in the delightful process of playing video games, then immediately complaining about them. When he is not playing games (a rare occurrence), he can be found either writing about things that no one cares about, or haunting the quiet streets of his Canadian suburb.
Related Articles: Disjunction, Indies
Share
Tweet
Share
Submit