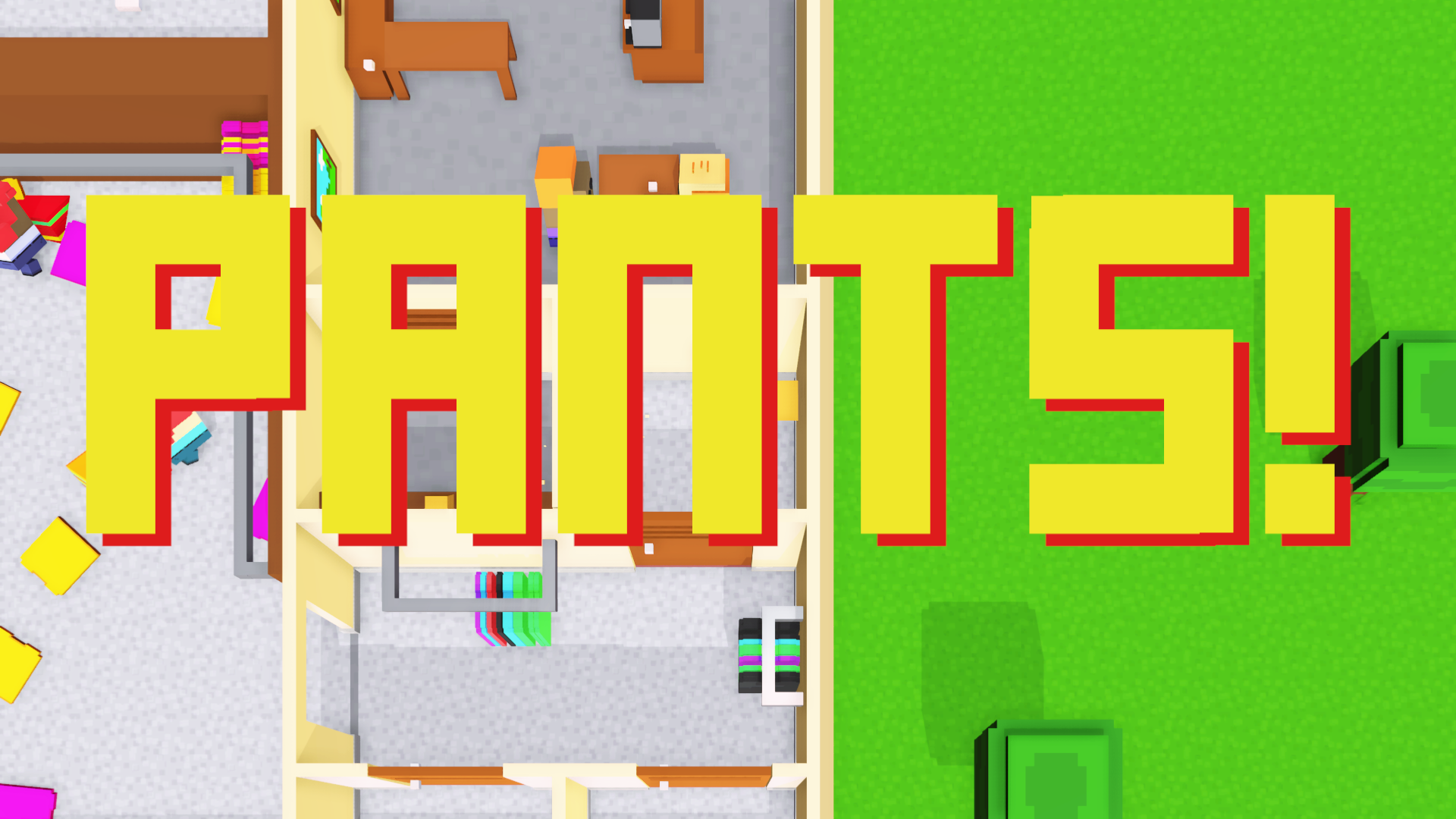 In eighth grade, my music teacher bent over and ripped his pants.

It wasn’t like one of those mini-tears you could hide beneath an oversized jacket. This was an undisguisable, crotch-to-beltline, Grand Canyon-level tear. My friends and I look back at that day in mirth, but now as a wizened 22-year-old, I can imagine the crippling horror my teacher must have experienced when he heard that terrifying rip. He probably still shudders when he remembers his quick fix: skimpy gym short loaners pulled taut over his khaki trousers.

Ripped Pants at Work captures the outrageous, silly elements of this all-too-real nightmare in its top-down, stealth-based gameplay. You play as a randomized, Mega Blok-esque employee who’s forced to slink around the city in pursuit of new pants. And if someone catches you? “You’re fired!” — and you start again at that traumatizing, inciting incident back at the office.
Citizens stroll around on pre-programmed paths, and if they see you in your tighty-whities, a meter displayed above your head begins to fill. It makes the gameplay pretty forgiving, in that if a citizen is onto you, you can quickly slip around a corner, plunge into nearby bushes or hide next to waist-high desks until the meter empties again.

This forgiveness and predictable stealth minimizes the game’s challenge, but as I played, I suspected it wasn’t meant to be difficult. This is a game where NPCs walk around saying things like “Pants put the ‘P’ in ‘productivity’’”. There’s even a museum you can visit dedicated to the history of pants. Each new area you explore has a pair of pants tucked away for you to find, but once you learn the path to the pants, these areas become less challenging. (Especially considering you can typically make a balls-to-the-wall mad dash through each area to begin with.) Alas, the joy is not in sneaking past NPCs but rather in exploring each of the cutesy corners of town.

Hiding in the sewers is a group of pants-less sympathizers. They might have a gift for the wanderer who can find them.

Exploration might be the only activity driving you through the game, because it’s certainly not in finding new pairs of pants. There’s a screen in the menu that displays each new pair of pants you find, but the game lacks any indication of how many pants are scattered across town and offers no reward for finding them. Instead, when you find a pair of pants, you’re crudely returned to the office. There’s a timer that shows you how long it took you from ripping your pants to finding a new pair, but again, there’s no reward for beating a certain time. There’s not even a leaderboard for comparing your runs against friends’.

You can experience just about everything Ripped Pants at Work has to offer within an hour, which is good because, exploration aside, there isn’t anything in the game that will make you want to stick around anyways.

Hunter Wolfe just graduated with his B.A. in Communication/Journalism from Shippensburg University and has nearly four years of professional writing experience. His content has been featured on sites like Rolling Stone's Glixel, Destructoid and The Artifice. You can check out his full portfolio at: www.hunterawolfe.com.
Related Articles: Ripped Pants at Work
Share
Tweet
Share
Submit