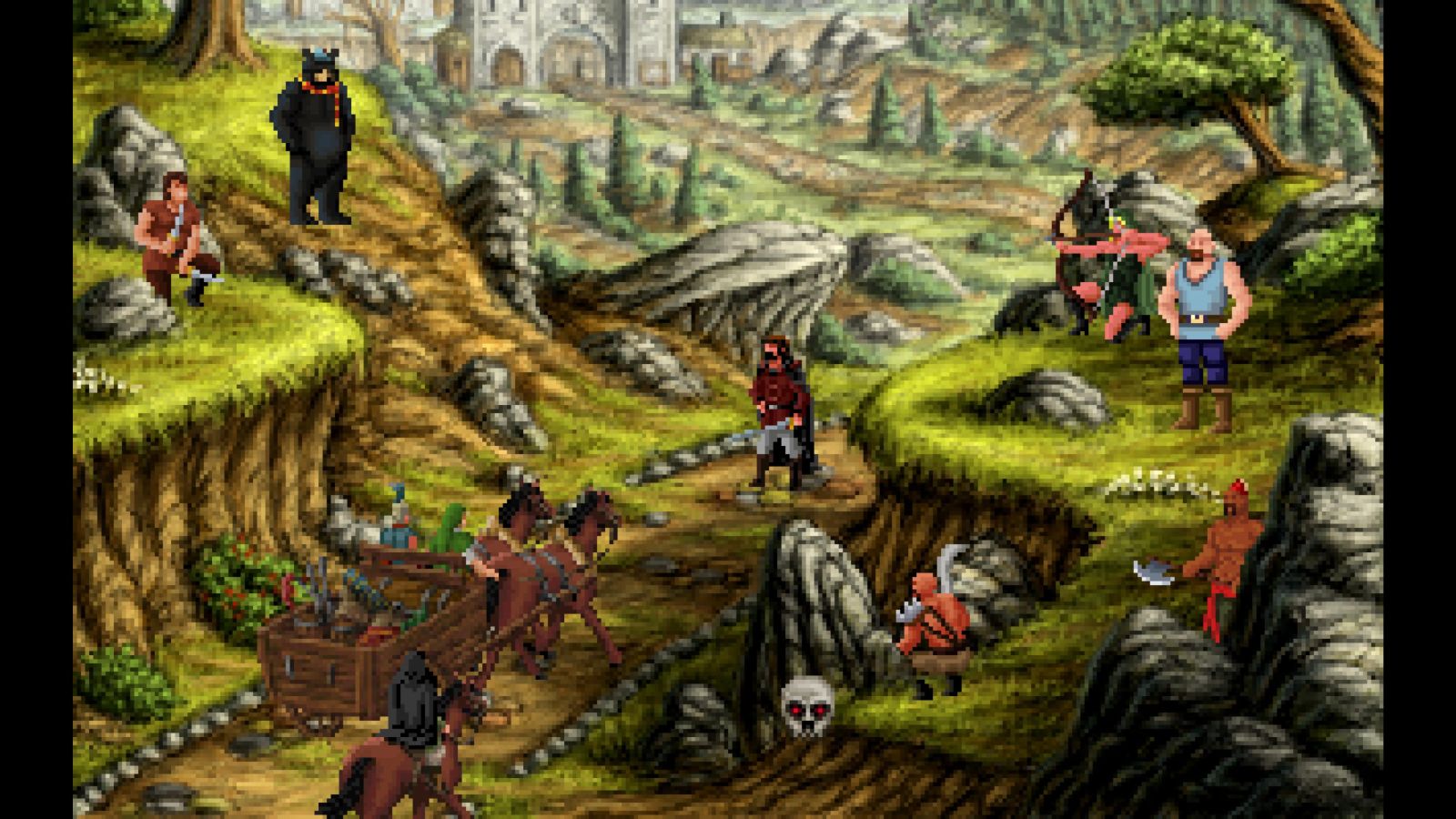 Point-and-click adventure games have been making a slow, but steady resurgence in recent years, long after initially gaining popularity in the early 90s mainly thanks to Lucasfilm’s incredible releases and Ron Gilbert’s fantastic Monkey Island series. Those of us that grew up with these games view them with near blinding nostalgia that helps us overlook some of the incredibly difficult and obtuse puzzles these titles had and the frustration that stems from the often-confusing design. Nearly all the original point-and-click games remain fun, especially the Monkey Island series, but it’d be a lie to pretend that they didn’t have issues that are hard to overlook in modern times.

Quest for Infamy, for better or worse, nearly perfectly replicates the games that it mimics, so much so that players would be hard pressed to believe that this game wasn’t made in the 90s. Originally released on PC in 2014, everything from Quest for Infamy oozes 90’s – from the graphics, the gameplay, the story, the humor, and the frustration that stems from the point-and-click design –  only this time the game does not have the added help of nostalgia making it a bit harder to overlook some of the flaws. 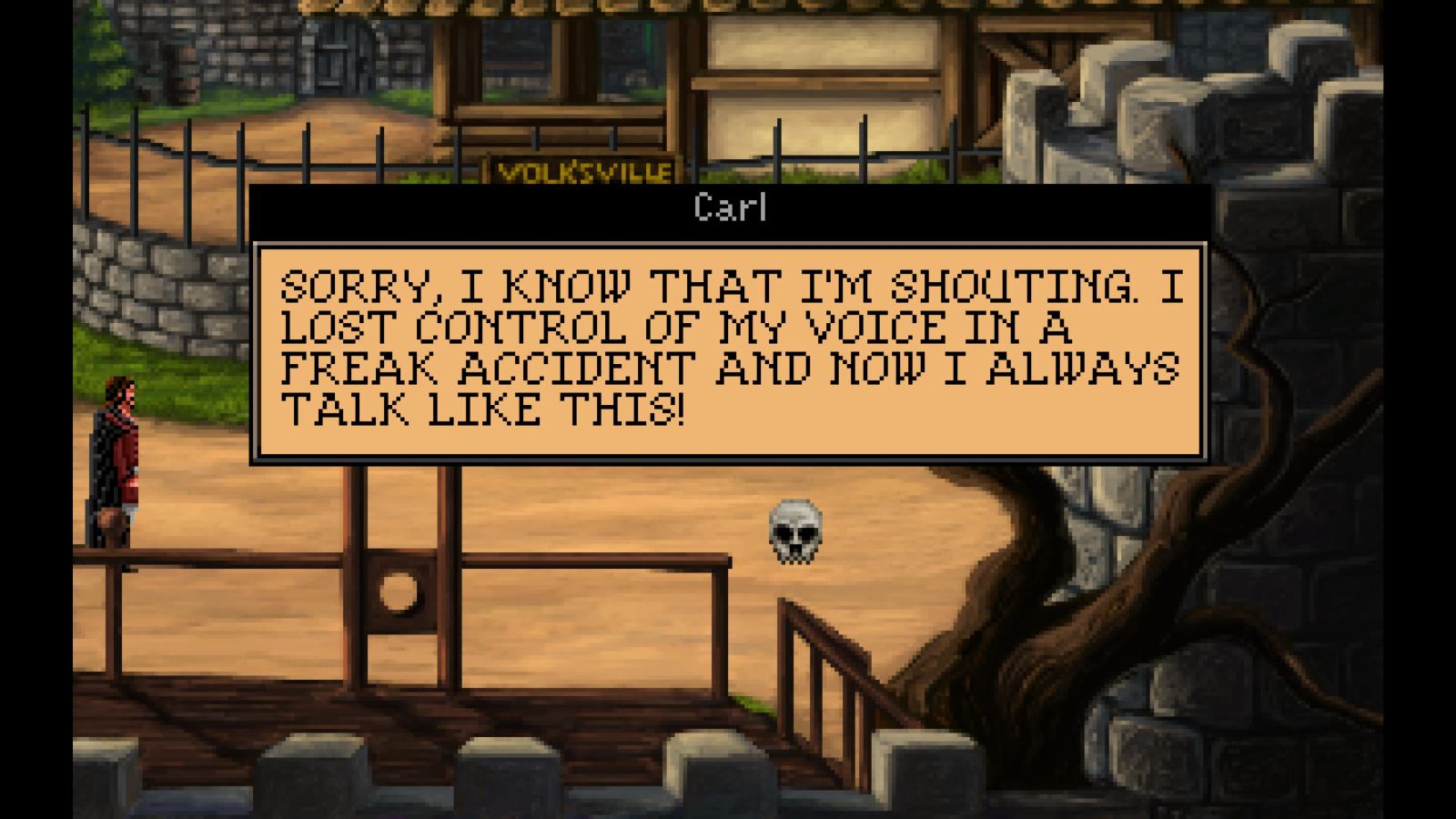 That’s not to say that I didn’t enjoy my time with Quest for Infamy. It is a hilariously written adventure about a man, named Roehm, who wanders into town attempting to kill some time until a bridge is repaired and finds himself roped into a much larger scheme involving bandits, mysterious cults, a talking bear, shady law enforcement officials, wizards, fortune tellers, drunks, and so much more all on a quest to find the Eye of Jaager, a mysterious stone with a devastating back story.

Roehm is nonchalant and takes everything, including meeting a talking bear, in hilarious stride. He, along with a sarcastic narrator, spouts off immature humor, makes jokes at nearly everybody’s expense, and essentially has a jolly good time as the world around him gets bleaker and more confusing. Unlike others attempting to find the Eye of Jaager, Roehm just wants to make money and is never shy about his true feelings. It’s refreshing to have a character that is so upfront about everything, and the game’s NPCs seem to appreciate it as well, as Roehm has a knack of making nearly everybody he meets like him. 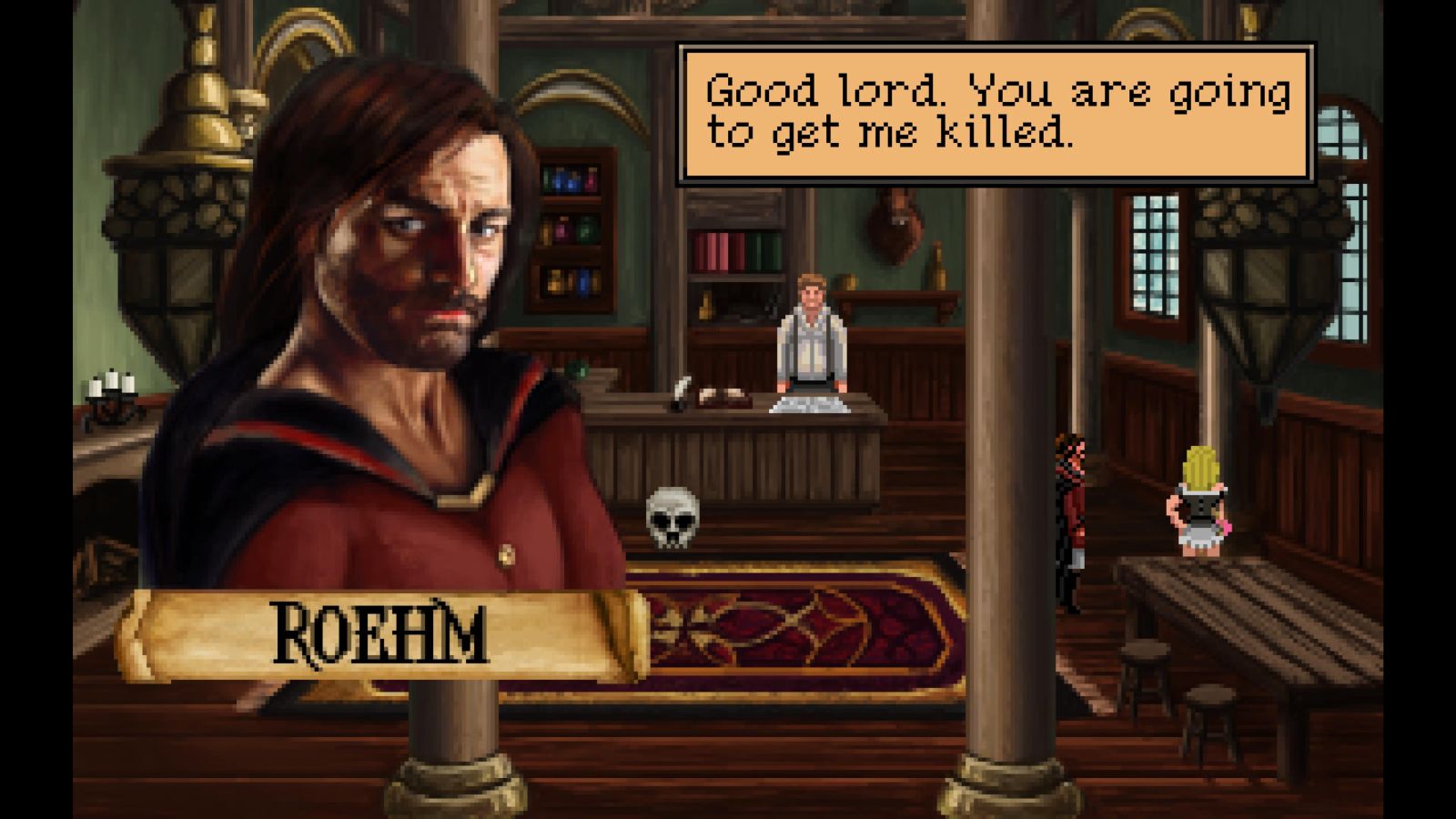 The gameplay is exactly what you’d expect from the genre. Players complete tasks by wandering through towns, forests, abandoned ruins, desolate caves, shipyards, and more and interacting with nearly everyone and everything they see. Almost every NPC you encounter can be spoken to, with varying degrees of success as to whether they provide interesting information or just a generic response, but the narrator tends to comment on the ones with nothing to say, providing some humorous moments. The game does feature voiceover, although there are strange issues with voice overs changing tone and possibly even actors during conversations. I’m not sure if this stems from voice overs being recorded at different times and places, or if some of the dialogue is from the 2014 release and new dialogue was added for this version, but while It’s distracting, it’s not game breaking.

Your basic abilities include: checking out an item or person, which normally involves the narrator commenting on that object and explaining its significance – or lack of significance, or just making fun of you for looking at it; touching an item, which is used to enter doors, move obstacles, steal items, etc.; using an item, such as your weapon, giving an item to an NPC, or to scale walls with a rope, etc.; speaking, which allows you to talk to the various people you encounter; and finally the basics of walking, sneaking, and running. Additionally, there are ways to combine items in your inventory, equip items, etc. but your main choices are what you toggle through 90% of the time and thankfully can easily be switched between via the L1/R1/L2/R2 buttons without having to use the cursor and navigate the menu – although that is an option if you prefer that method. 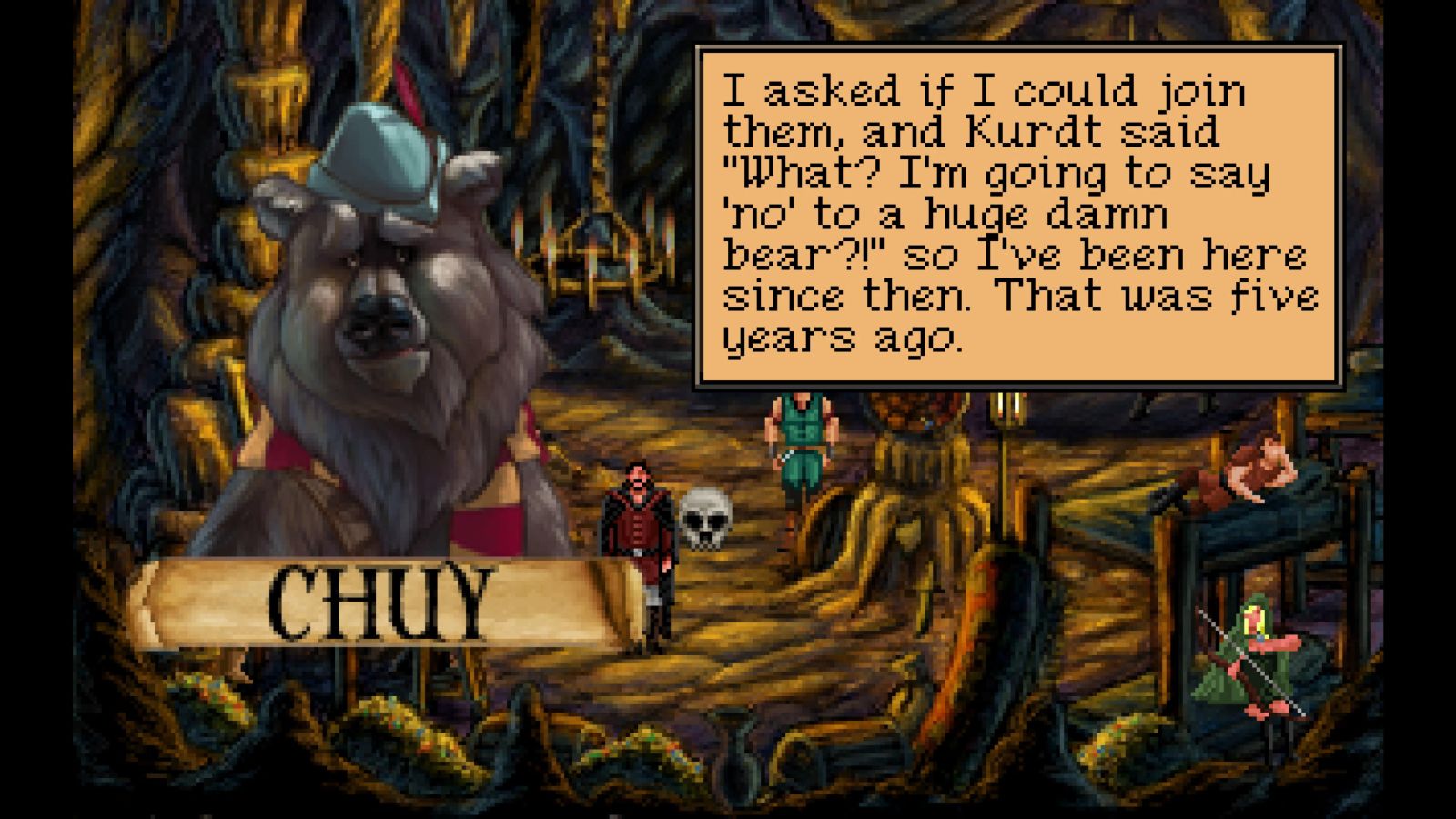 Quest For Infamy is divided into a prologue and three acts, with the prologue essentially being where you determine if you’d rather play as a Rogue, who is adept at sneaking and thievery, a Sorcerer, adept at magic, or a Brigand, adept at fighting. I went with Brigand, as I nearly always focus on melee in games, but the other options would open a whole new world to players as they have extremely different side quests and abilities which can be used throughout the game. Act I serves as the set up for the main story and gets players invested in the world, acclimated to the gameplay mechanics and aware of the important characters, thus allowing Act II and III to flow a bit better as the story progresses and players become adjusted to what the game expects of them.

The joy of point-and-click games stems from the sense of exploration and experimentation they provide, but along with that also comes frustration. Quest for Infamy’s world is large and gradually opens as you progress, but the game rarely tells you where to go or what to do, leaving players aimlessly clicking on spots on the screen in hopes of finding items that can be used or new directions to travel. There is an option to turn on hotkey prompts which helps immensely, as at least then you know every clickable item on screen, but what to do with those items is often a mystery. My main gripe stems from not always being aware of every direction you can explore on a screen, meaning you sometimes miss paths that are not clearly marked or seem to be dead ends. 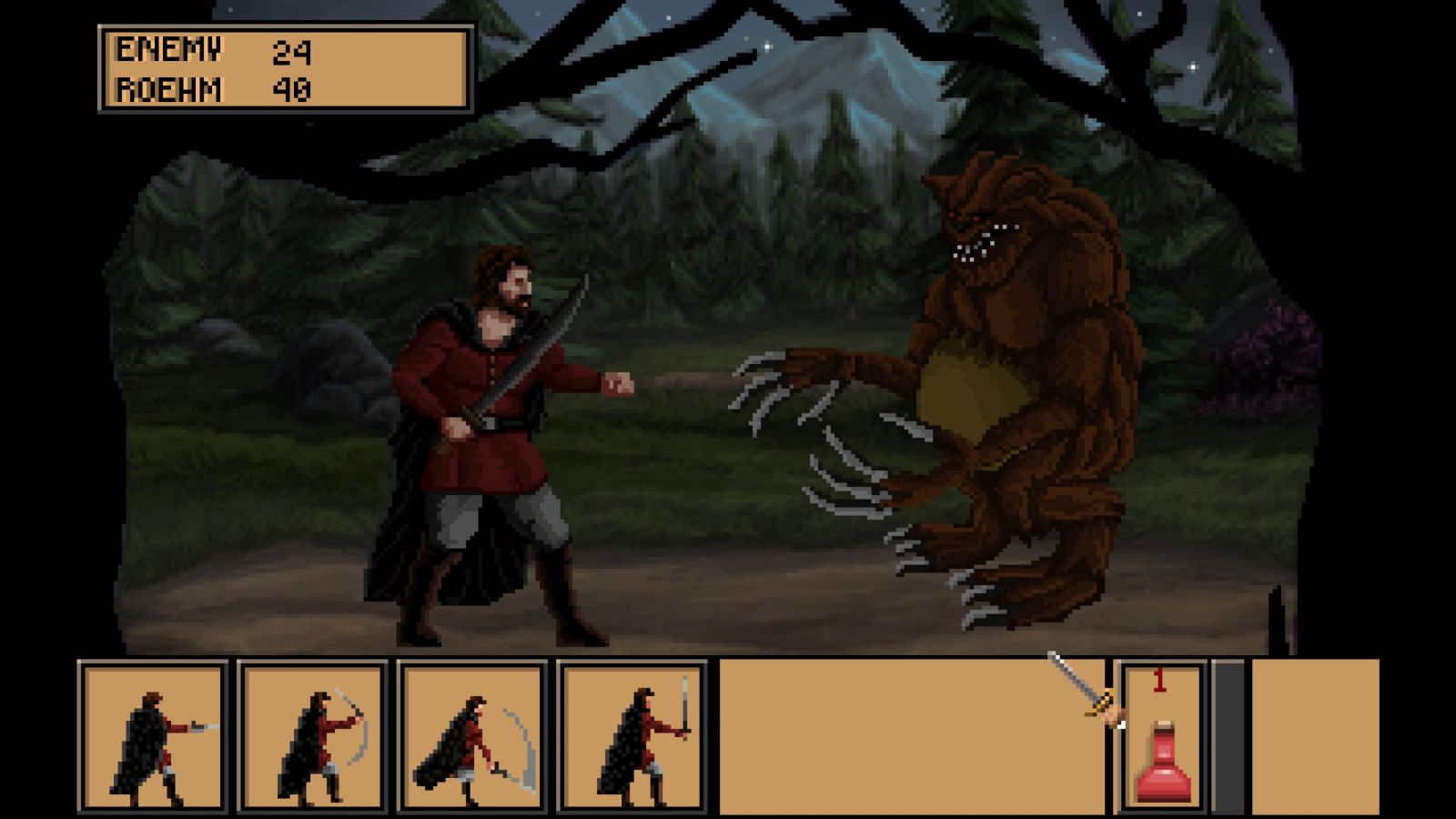 Aside from these frustrations, Quest for Infamy has a fun back and forth between finding new places, experimenting with items to get past puzzles, and figuring out how to unravel new story details. For every moment I became stuck there were five moments where I was having a blast figuring out how to get past a particularly obtuse puzzle – like mixing moss and hay to create a flammable goop that I then used flint on to create a fire and clear a fireplace of wasps. Combined with the hilariously immature and genuinely funny conversations scattered throughout the world, Quest for Infamy mainly overcomes the general issues of the genre from sheer goodwill due to its charming setting and characters.

It helps that the world is varied. During your playthrough you’ll stumble upon a hermit village, an underground bandit lair, a quaint town, multiple forests, a creepy cemetery, an apple farm, wells you can climb into, collapsing mining caves, dilapidated houses, and a giant port city which towers over the landscape. Each location is exquisitely detailed in charming retro fashion and helps to keep the game from feeling repetitive, which is nice as you will run back and forth between locations often. 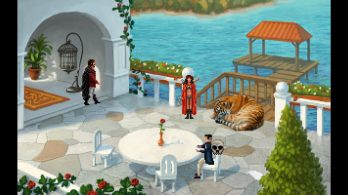 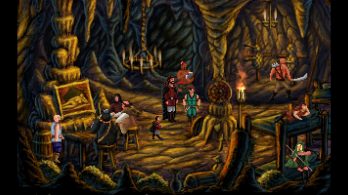 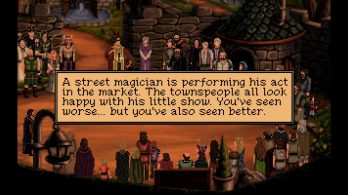 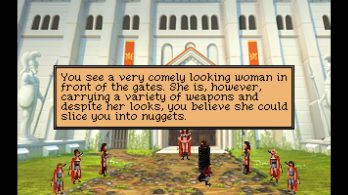 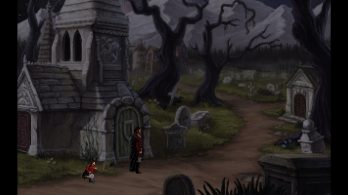 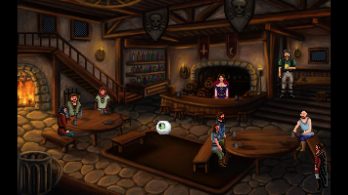 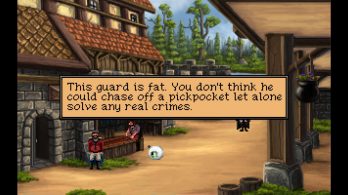 Aside from exploration, you will participate in enemy encounters. Upon seeing an enemy, you have around five seconds to flee or attack first, wait any longer and you’ll be attacked. During fights you normally have three modes of attacks, depending on your character type. For brigand you have stab, slash, and hack. How effective an attack is depends on the enemy type and your skill level. Every attack increases your proficiency at that attack and slowly builds up your overall attack power. If a fight is too hard, you do have the ability to escape or to use a potion to regain health. Fights are fun but do become repetitive as there are few attacks to use, but it’s nice to watch your character grow and see the difference in damage as you master your skills.

There is one major issue with Quest for Infamy that I must address: game breaking bugs. Twice I encountered bugs which forced me to close the game and reload a save, often losing an hour or more of progress. This taught me to save more often, but then unfortunately the game froze as I was attempting to save, again losing all my progress. While two times does not seem like a lot, it caused me to redo multiple hours’ worth of playtime and lose my grip on where I was in the story as I could not remember who I had spoken to or what items I had acquired during the time that was lost. The first bug simply got my character stuck in a continuous loop walking between a character to speak to them and back to the other side of the room where I was when I gave the prompt to speak while the second, as I had previously mentioned, occurred while opening the menu to save.

Quest for Infamy is a near perfect recreation of point-and-click adventure games of the past. Featuring hilarious dialogue, immature humor, a variety of locations to explore, some clever (and some frustrating) puzzles, and a decently long campaign with an interesting story to unravel. Game breaking bugs and a few of the genre’s persistent issues, such as frustrating design and confusion as to where to go or what to do next, do present themselves and in this modern era are far harder to forgive. Still, Quest for Infamy is fun, funny, and worth giving a shot.

Richard Allen is a freelance writer and contributing editor for various publications. When not writing for Gaming Trend you can find him covering theatre for Broadway World, movies and TV for Fandomize, or working on original stories. An avid retro gamer, he is overly obsessed with Dragon's Lair. Chat with him via @thricetheartist on Twitter and @richardallenwrites on Facebook and Instagram.
Related Articles: Quest for Infamy
Share
Tweet
Share
Submit