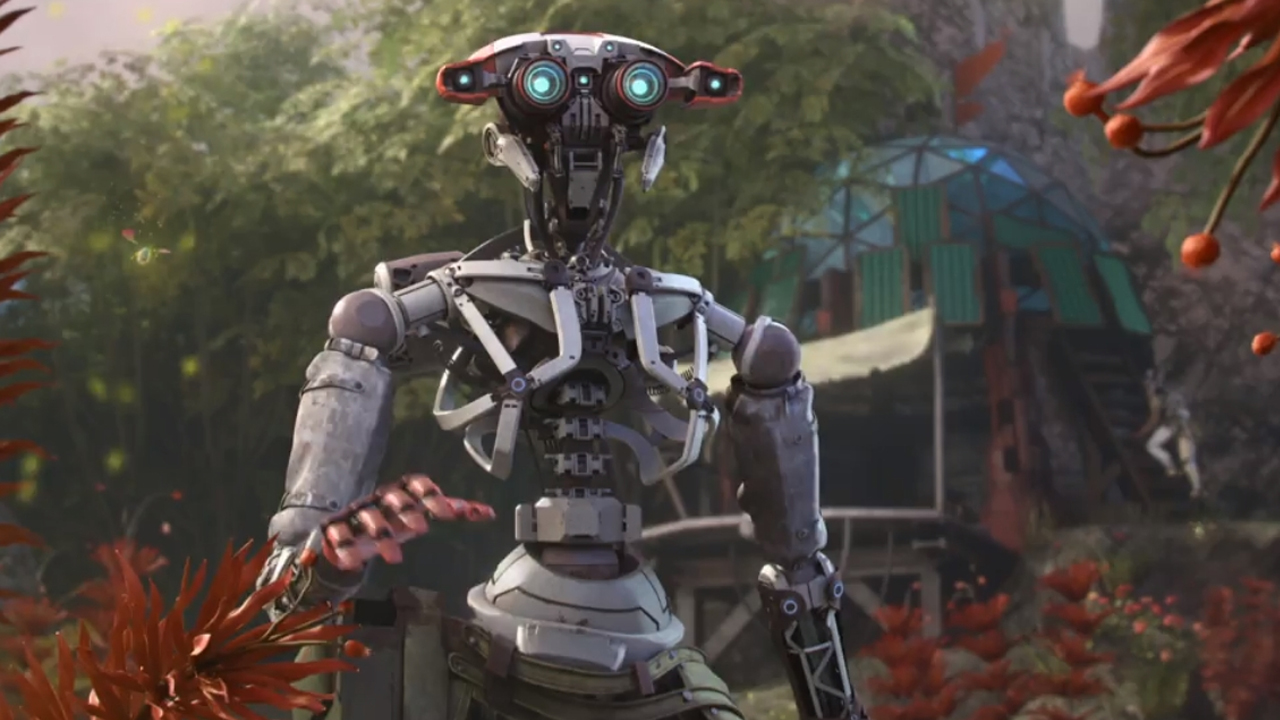 I just ripped off my arm, upgraded it to a pulse bomb laser, leaped off a cliff, flew to an adjacent tower jutting into the sky, and leaped down to create a massive explosion, scattering enemy robots in all directions. It turns out, being a well-upgraded combat-enabled robot is a hell of a lot of fun. Insomniac Games has latched onto something amazing with their Oculus exclusive title, Stormland, blending the best parts of many games in the genre into one seamless — and downright gorgeous — title. Let me tell you a little story about a robot with a flower where its heart would be.

Stormland drops you into the metal chassis of a robot named Vesper. Vesper can’t remember what happened, but all of her robot friends are missing. Stumbling through the jungle you eventually wander into some luck — a robotic core who is willing to help you piece together what happened. Unfortunately and all too soon, you run into what is likely the cause — a robotic force called The Tempest who have shattered this world. It’s your job to skill up, upgrade your chassis, earn new weapons, and eventually figure out where these invaders are coming from and put an end to them.

It’d be easy to dismiss Stormland if the storyline and gunplay was all there was on display. In fact, I’d say that these two things aren’t the primary draw. Instead, Stormland’s heart lies in exploration and locomotion. The explorable world is HUGE, and that is the primary draw. Vesper, through upgrades (and wow are there a lot of little upgrades) can earn the ability to “surf” on the cloud cover that separates the islands that jut into the sky. You can glide for an extended period of time by holding your arms in front of you, and climbing is as simple as getting the upgrade and then gripping with the Touch Controllers as you pull yourself up literally any surface you see. Surfing along the clouds, you can accelerate by holding both triggers, going even faster if you can hit special nodes in succession. You’ll occasionally need special traversal or exploration upgrades, which can involve literally ripping your arm off at the socket, upgrading it, and putting it back on. It’s nothing if not unique.

Stormland’s world is indeed expansive, and the storyline will take you roughly 6-7 hours to complete. What’s completely new, however, is the “Cycling World”. Every week, the Terminus resets, and the entire world changes. Your sub-objectives, side quests, and the lay of the land all change, leaving you with an entirely new world to explore. The main beats remain the same — explore the three worlds, retrieve the keys to topple the outposts, conquer the Terminus…but the twist is that there is a real-world clock running. On Tuesday morning, the whole thing will change, halting your progress and giving you a new world to explore, whether you are ready or not. That said, successfully conquering the Terminus carries forward your progress and upgrades, but makes the enemies a little more numerous and improves their aim and damage. They don’t seem to get any smarter, per se, but that doesn’t make it less difficult.

To help you explore the world of Stormland is the multiplayer component, unlocked after roughly an hour and a half of exploration and story beats. Teaming up with a friend, you can explore the world together. While most of the time the enemies aren’t sharp enough to outwit you with tactics, they certainly can overwhelm you with numbers. A friend helps even the odds, and makes the final climb of the Terminus each week a little more manageable.

What good is a shooter without a variety of ways to down enemies? Stormland’s gun bench is a little thin with just half a dozen guns to choose from. It’s very clear that there is Ratchet and Clank DNA deep in Stormland as everything you see in the environment is either trying to kill you, or must be collected for upgrades. Nodes drop varying amounts of resources which you can bring to a resource station to upgrade your guns from V1 to V3, giving them more punch, accuracy, and a little more ammo (which is not infinite — a real departure from most VR shooters). Unlocking the upgraded versions is very expensive, so you’ll spend a lot of time harvesting nodes, but thankfully respawning and refilling them is a little more sane.

Upgrades occur at this station, using a tactile push-button system.

Your “inventory” is located on your body. You can place a gun on each hip, a grenade (or more if you pick up slot upgrades) on your chest, a shield on your left wrist, and several different arm upgrades including an electrical pulse bomb. The grenades you can pick up can heal you, EMP or frag the enemy, or just provide a refill to your power tank. While I did run into an issue where I kept accidentally losing one of my guns, these familiar locations start to feel very natural. The ways you can mix and match the upgrades, the handful of weapons, and your attack style (single weapon, weapon and shield, or akimbo) makes for interesting builds and play style choices that favor player agency. I never felt like stealth was a viable choice (there are tall bits of grass you can hide in), but occasionally sneaking up behind an enemy and yanking out his power core never gets old, even if it seems to alert everyone in the area.

As you collect nodes you’ll eventually find various fruits and flowers in the land. Collecting these feeds a different upgrade mechanic. Heading to an upgrade station, you’ll get a look at your robot and a dozen and a half upgrade options. These can upgrade the shield you carry on your wrist, make you move faster over land, give you the three-point hero stance death-from-above move, make your bullets go further, and much more. This upgrade system is FAR more tactile than any VR game in recent memory; this system, as well as all menus, are handled by literally clicking them in the air, Minority Report style.

Speaking of amazing interface, the map in Stormland is outright ingenious. Pressing a small tab on your left hand opens up a 3D hologram of the entire map. Placing a waypoint is as simple as pointing your finger where you want to go, and *ping* — a small star appears. In the distance a huge orange column of light guides you towards your objective. It’s perfect for the futuristic setting of the game, and it keeps the action moving by keeping the player on track. 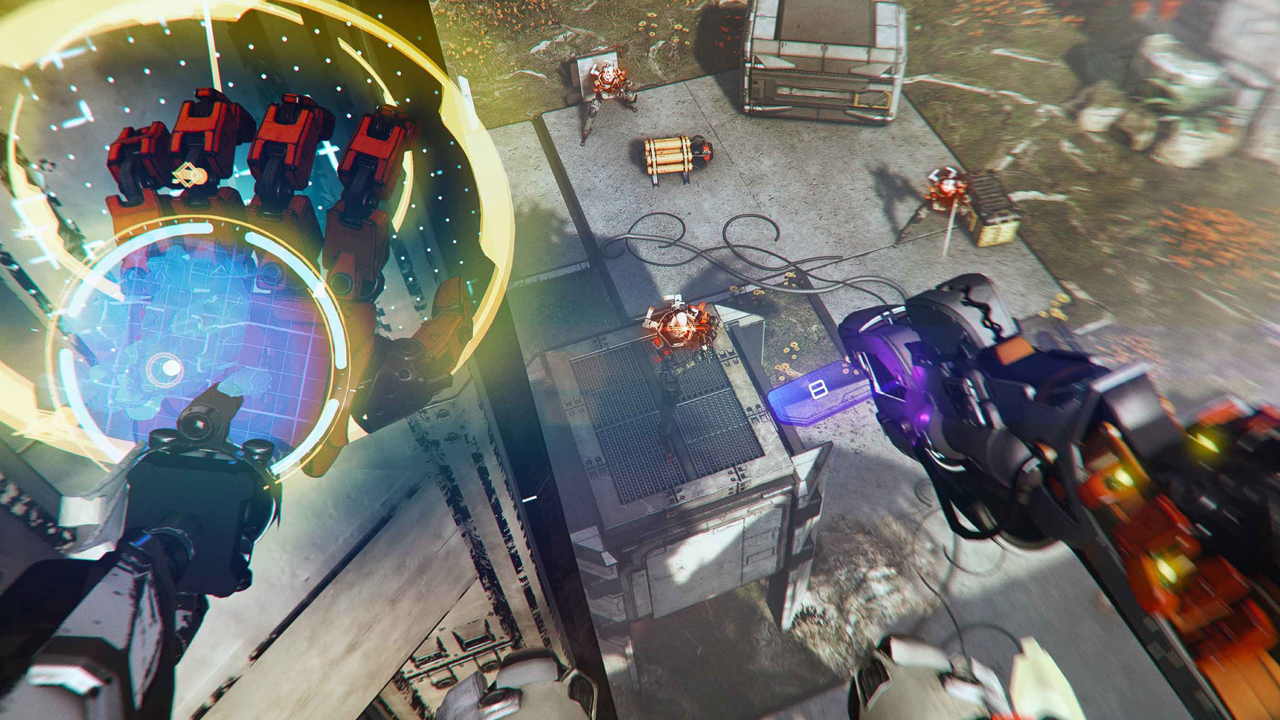 Once you get the upgrade, there’s not much a little DFA can’t solve!

From a mechanical point of view, the game does an amazing job both graphically and technically. Once you load into the game, there is no additional loading — even on respawn. Furthermore, the wide open world has a draw distance that rivals any flat screen game. Graphically, Stormland is easily one of the best looking games on the market. What it lacks in humor (there are only a handful of other characters beyond the Tempest and echoes of the past you’ll discover as you explore), it makes up for in presentation.

There are really only two things that I found troublesome with Stormland — I could only play it for an hour at a time without needing a nausea break, and the fact that it’s somewhat repetitive. I suffer from motion sickness, which makes the smooth locomotion in Stormland hard to take for long periods of time. That said, there are several ways to mitigate, if not overcome motion sickness. Snap turns, vignette mode, and adjustments to the speed which your character will turn can help, but I still found myself needing a break and some water after about an hour. As for repetition, the quests are mostly “Go here, find the thing, activate the thing, go to the next thing,” changing the landscape does little to drive variety. The good news is that the “live service”-esque nature of Stormland could make a liar out of me by simply injecting some new missions, guns, and enemies. Time will tell.

The real question here is whether or not there is enough compelling traversal and combat mechanics to keep me coming back week after week. I enjoyed the story, but what keeps me coming back is the fun of flying, gliding, climbing, and cloud-surfing through the world Insomniac has created.

With gorgeous visuals, an expansive open world, and multiplayer support, Stormland delivers a serviceable shooter with an exceptional upgrade system, and a feeling of progression. What makes it amazing is all of the ways you can glide, fly, surf, or climb -- the expansive world of Stormland is yours to explore, until it changes next week and you get to do it all again.

Ron Burke is the Editor in Chief for Gaming Trend. Currently living in Fort Worth, Texas, Ron is an old-school gamer who enjoys CRPGs, action/adventure, platformers, music games, and has recently gotten into tabletop gaming. Ron is also a fourth degree black belt, with a Master's rank in Matsumura Seito Shōrin-ryū, Moo Duk Kwan Tang Soo Do, Universal Tang Soo Do Alliance, and International Tang Soo Do Federation. He also holds ranks in several other styles in his search to be a well-rounded fighter. Ron has been married to Gaming Trend Editor, Laura Burke, for 21 years. They have three dogs - Pazuzu (Irish Terrier), Atë, and Calliope (both Australian Kelpie/Pit Bull mixes).
Related Articles: Let's Play, Stormland, VR
Share
Tweet
Share
Submit