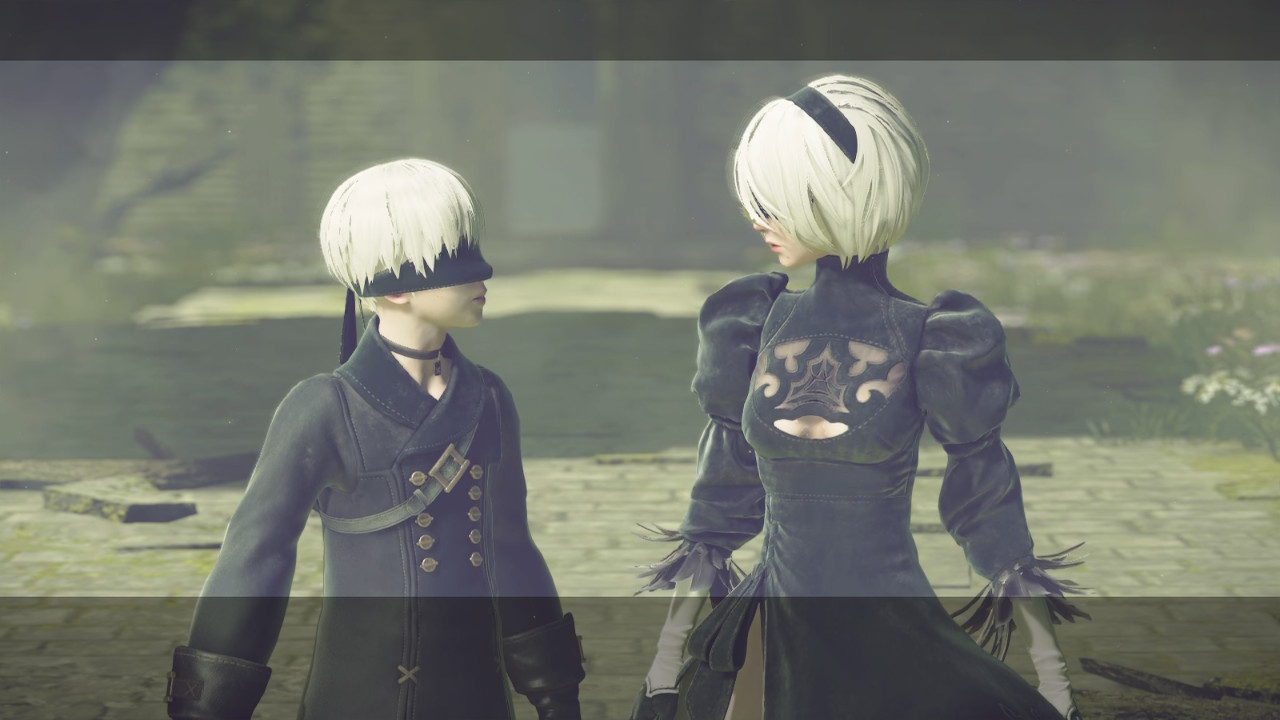 NieR: Automata The End of YoRHa Edition review — In the wake of your leave

The year is 11945 AD. Androids fight a proxy war on behalf of humanity against alien invaders, who in turn produce Machine Liforms to battle in their stead. Androids in service of YoRHa, including 2B and 9S, are sent to a ruined city on earth to eliminate a new type of Machine weapon. Unfortunately, 2B’s squad is wiped out on approach and she and 9S struggle to eliminate the weapon when several more pop up. The pair detonate their black boxes to wipe out the enemy, killing themselves in the process. Glory to Mankind.

NieR: Automata is one of the best games ever made. It is an incredibly thoughtful work of art that will stick with you for the rest of your life if I’m any indication. The original NieR was already one of my favorite games, glaring flaws and all, but back then it was clearly one of those games that would immediately get forgotten. Poor review scores and sales made sure of that, but I loved it all the same. Imagine my elation then when a sequel was announced half a decade later with basically no fanfare. When I actually got my hands on the game, it was much more than a janky, lovable mess. It was good. Like, really, really good! Thanks to assistance from Platinum Games, movement and combat had evolved to something approaching the action game greats like Devil May Cry and Bayonetta. Automata was also a massive hit, selling extremely well and receiving almost universal praise from critics. Another five years later and we reach the present, complete with another miracle release: NieR: Automata on Nintendo Switch.

It’s difficult to overstate just how impressive this port is. When the game was initially released, my desktop struggled to reach a stable framerate and even PS4 had troubles occasionally. While Automata on Switch doesn’t reach for the full 60 of its counterparts, and I admit I was skeptical at first, it’s a shockingly smooth experience. Out of my 10 hours so far with the game, mostly doing side quests and fishing (as you do) I only had three instances where the framerate would noticeably dip below thirty, and exactly one was in combat. Even then, the one in combat was only because it was in a particular location where the other two drops occurred. I’ve praised other impossible ports like Doom Eternal before, but even that doesn’t hold a candle to this. For the game to still look and play this good on a tiny console while barely using up any battery life to boot feels like a miracle.

Before I go any further, I should probably tell you what NieR: Automata is, shouldn’t I? Well, to briefly summarize, you play as 2B accompanied by 9S performing various tasks for YoRHa while scraping tons and tons of robots in the refined, fluid action combat Platinum is known for. 2B can equip two weapons at a time, one assigned to light attack on Y and the other to heavy on X. There are four types of weapons to use: small swords, greatswords, spears, and bracers (i.e. fists). Weapons act differently when in the light or heavy slot, so equipping two spears will still give you a full set of moves that any other combination of weapons would. Pressing the light and heavy buttons in different combinations will yield different moves, but at any point in your combo you can press up on the D-Pad to swap to your second loadout instantly, effectively doubling your already massive moveset. Pressing ZR will allow you to dodge/dash, granting you invincibility for a brief moment and, if you perfectly dodge an attack, you’ll be able to instantly counter with one of several moves like a juggle with Y, a heavy swing with X, or some devastating fire with R. 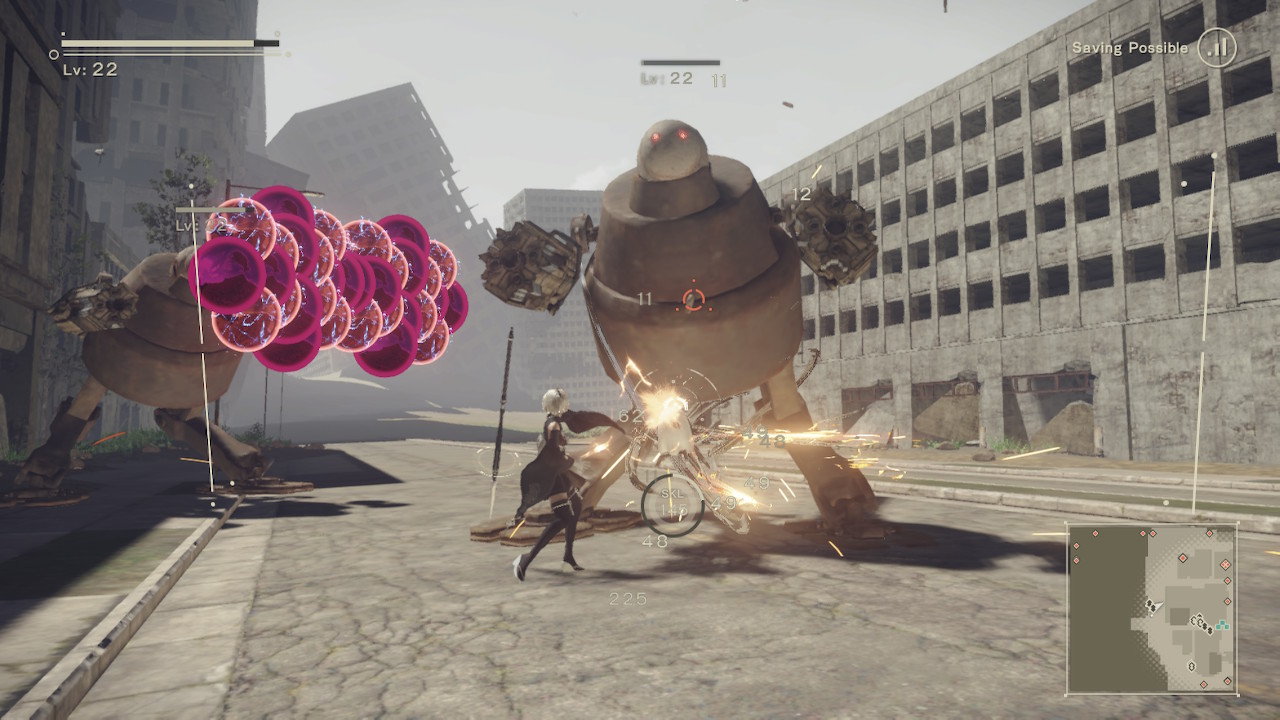 On top of melee combat, you are assisted by a Pod at all times to serve as your ranged option. You can hold R to shoot a gatling gun in whatever direction you’re aiming or at your locked on target (though the latter is less accurate). The Pod also has a special weapon, for example a giant laser, you can fire by pressing L, though this needs to cool down between shots.

As for your enemies, they can melee and use projectiles as well, making combat into something of a bullet hell. You need to weave between shots and dodge attacks all while dishing out your own array of shots and slices. It’s incredibly fun, and mixes in a bit of variety with some encounters being in 2D – either from the side or in top down. 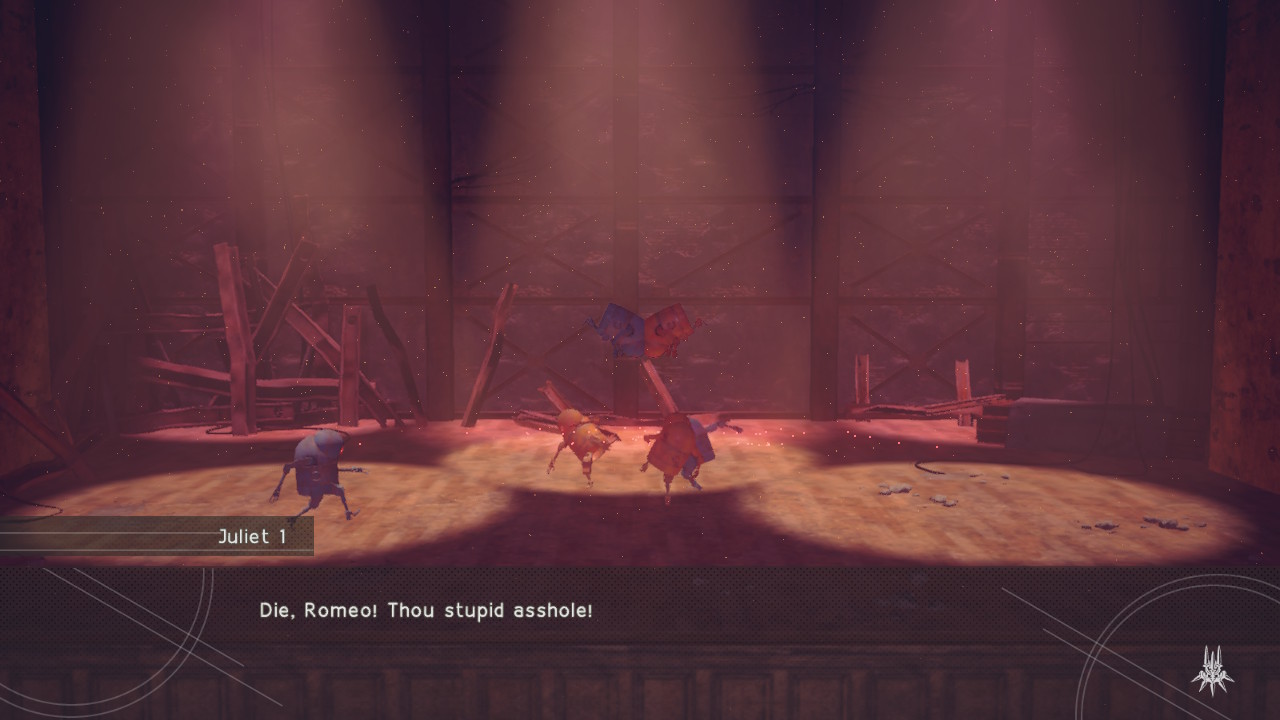 Outside of combat, you’ll be exploring a relatively small open world, complete with the city hub area, a desert, a forest, a flooded zone, and even an amusement park. Initially these locations may seem dull and gray, but as you play you’ll discover a lot of beauty in them emphasized by drastic changes through the story and of course with the music. You’ve probably already heard enough praise for Automata’s soundtrack, but it deserves all of that and more. It’s extremely varied and most songs have multiple versions to match whatever’s going on on screen. Let’s use my personal favorite track as an example: Sound of the End. Initially, you hear this as a dramatic boss theme, with steady drum beat, frantic violins, ominous piano, and a dramatic choir singing in the series trademark Chaos Language. This is called the Dynamic Vocals version, with its counterpart the Dynamic Instrumental version which obviously removes the choir. Where the song became my favorite was actually in the Quiet version, which strips away everything but the piano and choir, completely changing the tone from a desperate struggle against a tough, imposing foe, to one of quiet survival; clinging to a small hope at the end of the world after everything has turned to ash.

I cannot praise the soundtrack enough – I listen to it constantly – but the visuals also deserve some special attention. While I said they are propped up by the music, they are still gorgeous on their own. Automata does have a gray tint to it, but that only makes the rare splashes of color stand out more. It emphasizes how the world died long, long ago but nature is still struggling to return. To complement this, the main characters all dress in black and white, heck, even YoRHa’s base The Bunker is entirely presented through a black and white filter. It’s a great way to tie story, gameplay, and everything else all together. I don’t want to spoil anything, but the story is, in my opinion, one of the best ever written in anything. It’s not traditional by any means, requiring you to play through at least five “endings” to reach the true conclusion, but you get out what you put in. Even two fellow writers here described the story as lackluster, but I feel that’s because quite a lot of the plot is contained in side quests. You won’t miss any crucial details just blasting through the main story, but it will be much more enjoyable if you see the foreshadowing and extra bits in side quests. As I said, you get out what you put in. 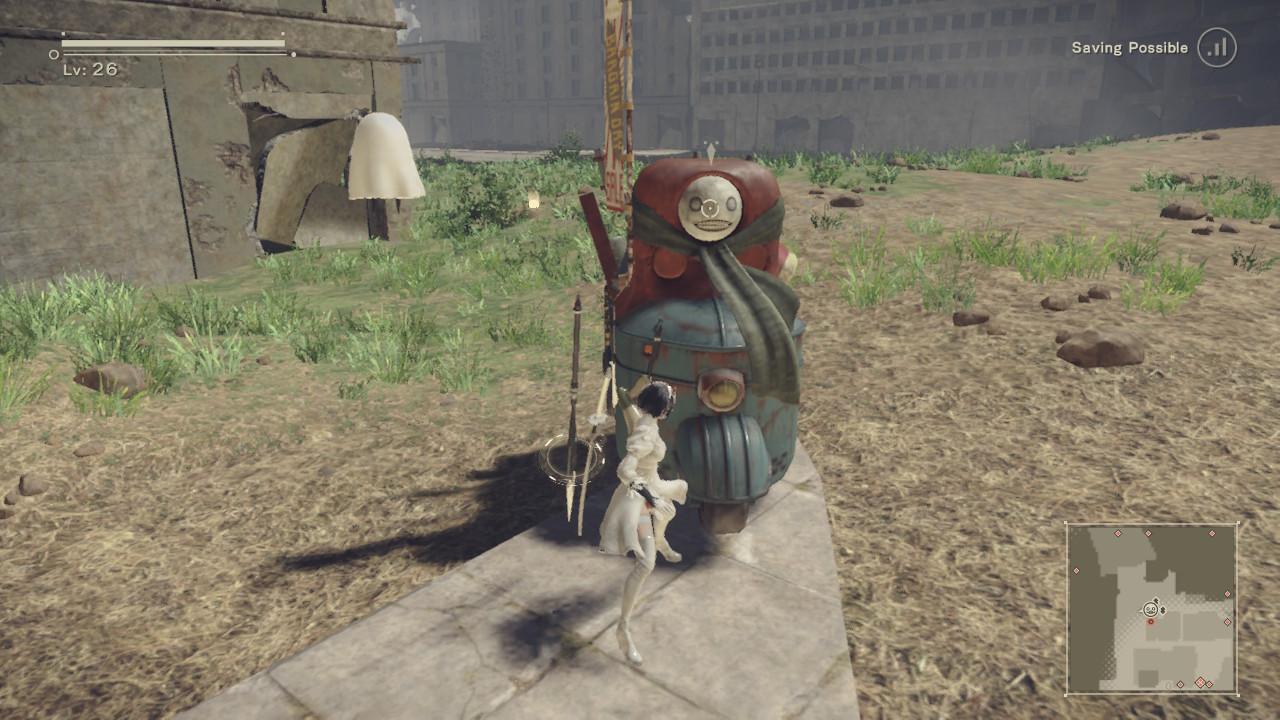 From what I’ve said so far, it’s clear I highly recommend NieR: Automata on its own merits whatever you can play it on, but The End of YoRHa does have a few goodies unique to it aside from being an incredible portable version. After playing through the intro (and downloading the free DLC on the eShop), you’ll be given access to a few new outfits, two for each of the main characters, two pod skins, and a few extra hats and masks. It’s nothing major, but the outfits and gear are cool and I always love to see the alternate color, 2P, represented. The game also includes the DLC, which consists of three colloseams and a weird music video/story thing. My sole gripe with this version is that it doesn’t seem to include the pre-order bonuses from when the game first launched, such as a pod skin that resembles Weiss from the original NieR. (Off topic, but I desperately wanted the real life recreation of Weiss that the voice actors all signed. If you’re reading this Yoko Taro, I am trapped on the moon and could really use a good cookbook to read.) I can understand not including console specific cosmetics, like the Valve head or PS1 pod skin, but having stuff like the Weiss skin would have been great to make this a more definitive version of the game.

NieR: Automata The End of YoRHa Edition review — In the wake of your leave

NieR: Automata The End of YoRHa Edition takes one of the best games ever made and turns it into a miraculous, portable experience. While 30 fps may seem like a downgrade, you won’t even feel the difference after a few minutes and the sacrifice is more than worth it. The new costumes are a great way to freshen up the game, but this version does lack some of the older cosmetics still exclusive to other versions.

David is the kind of person to wear his heart on his sleeve. He can find positives in anything, like this is a person who loved Star Fox Zero to death. You’ll see him playing all kinds of games: AAAs, Indies, game jam games, games of all genres, and writing about them! Here. On this website. When not writing or playing games, you can find David making music, games, or enjoying a good book. David’s favorite games include NieR: Automata, Mother 3, and Gravity Rush.
Related Articles: NieR: Automata The End of YoRHa Edition
Share
Tweet
Share
Submit