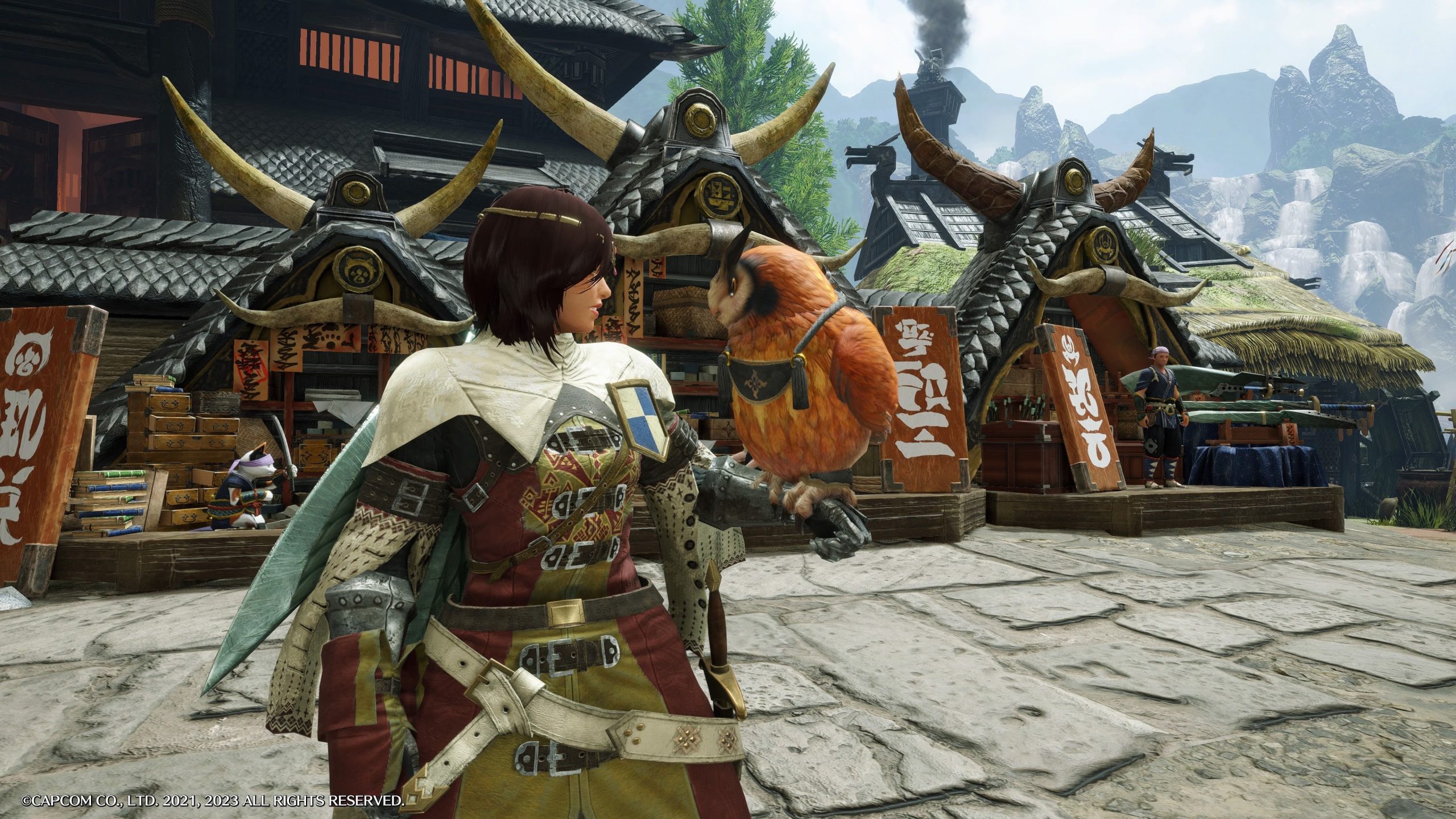 My favorite thing about video games is that I get to go to worlds that I could really only dream of. I get to interact with different stories, both fictional and based in reality. Video games allow us to feel like gods, to feel empowered. One of the games in particular that I was absolutely in awe of was Horizon Zero Dawn. You’re going up against massive, monstrous machines with naught but a bow, a spear, and some well placed traps. After Horizon Zero Dawn, I was on the hunt for another game that would instill in me that same awestruck feeling, one that would make me feel powerful even against mountainous odds. That’s when I was introduced to Monster Hunter: World.

I easily sank close to 200 hours in Monster Hunter: World. Even though the process is repetitive, the grind became addicting as I battled against monster after monster in my efforts to craft the strongest weapons and gear before heading off to battle a walking volcano, a diamond dragon, and so many other wondrous creatures. I used the bow as my primary weapon (not a bowgun, just a normal bow), which I was told wouldn’t be the best option if I wanted to be able to go on solo hunts at higher Hunter Ranks, however I stood my ground against the Tempered Kirin, the Seething Bazelgues, and the Fulgar Anjanath just as well as any glaive user. In games like these, it’s all about mastering your craft, learning attack patterns and damage queues, and knowing when to dodge, duck, dip, dive, and dodge.

After spending so much time in The New World, I was surprised and disappointed when I learned that the next Monster Hunter game wasn’t coming to Xbox and PlayStation, at least as far as we had known at the time. To be fair, it made sense for Monster Hunter Rise to be placed on the Nintendo Switch — afterall, many prior Monster Hunter releases were on Nintendo consoles — but why couldn’t the Switch share with the other platforms? World had been an astounding success, quickly shattering records. But, alas, it was not to be. 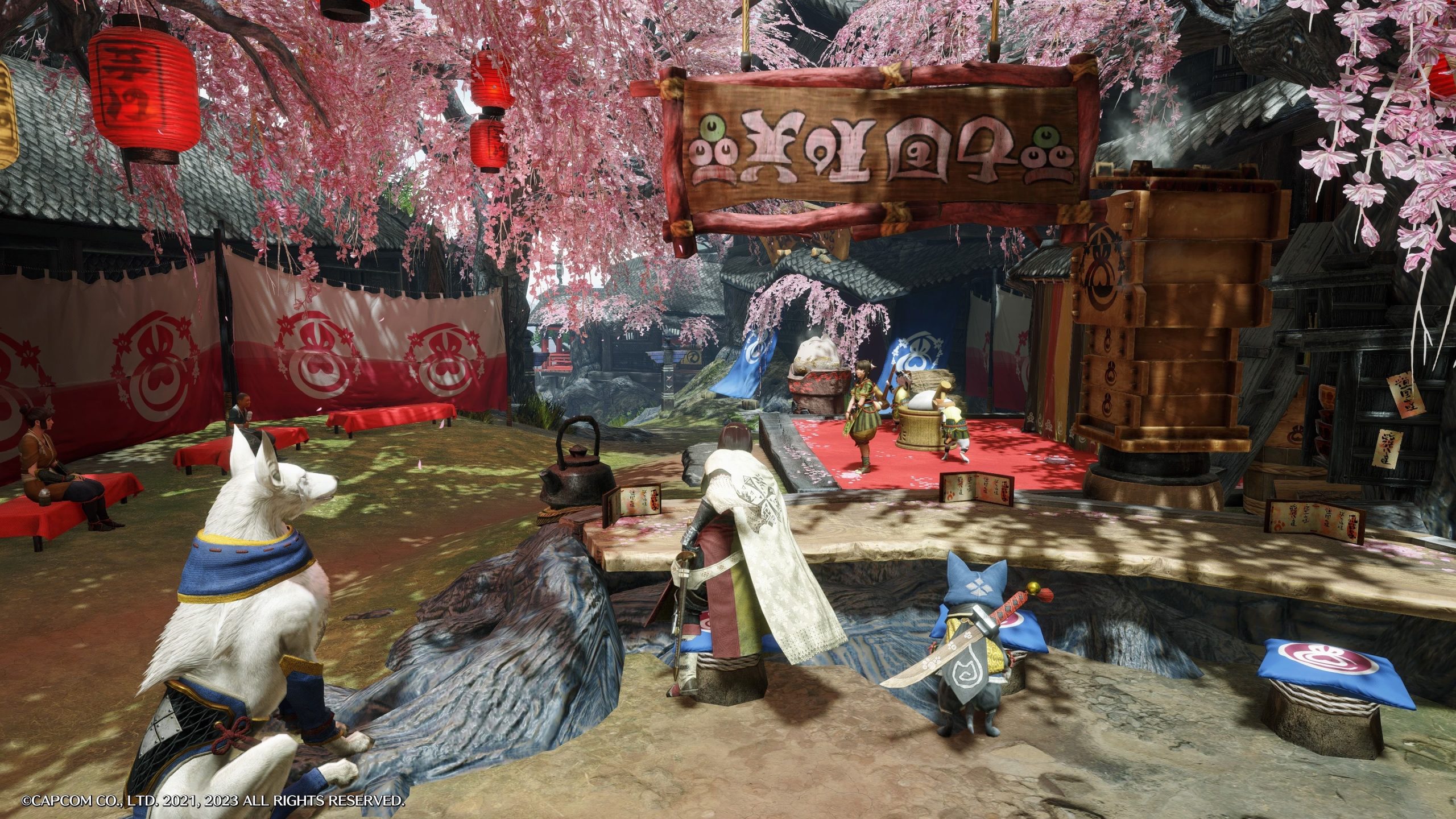 Monster Hunter Rise just released on Xbox and PlayStation on January 20th, giving more people the chance to head to Kamura Village to defend against the Rampage that threatens its people. Kamura Village has a beautiful historic Japanese aesthetic that is also present in the armor you craft and the clothing of the villagers. In previous Monster Hunter games, you are accompanied by a Palico companion but Monster Hunter Rise introduces the Palamute companion to run alongside you and your cat friend. What I love most about the addition of the Palamute is that you always have a faster traversal option than running on foot as you can ride the Palamute around the map. In Monster Hunter: World you were able to ride smaller monsters around, but the Palamute is also a battle buddy with other purposes – all around more reliable.

It was really easy getting back into the rhythm once I really hopped into Rise. My least favorite part is always the tutorial phase, wish I could skip past all of it, but I guess it is helpful to know where to get my grub before going on an excursion, where to upgrade my gear, and to hang out with my owl companion, my Cohoot, who I have graciously named… Hooter. (Oh, I should’ve named it Whoo-ter, missed the opportunity there.) Cohoots can help you find monsters if you’re a little lost on a hunt and they can help you find hidden treasures around Kamura Village. All of your furry/feathery friends can be customized with different fur/feather patterns as well as their clothing and even their voices. I don’t mean that they’ll start speaking the common tongue, but you can choose different bark styles for your Palamute and meows for your Palico. Imagine if they did start talking, though… Well, some Palicos do have dialog boxes. 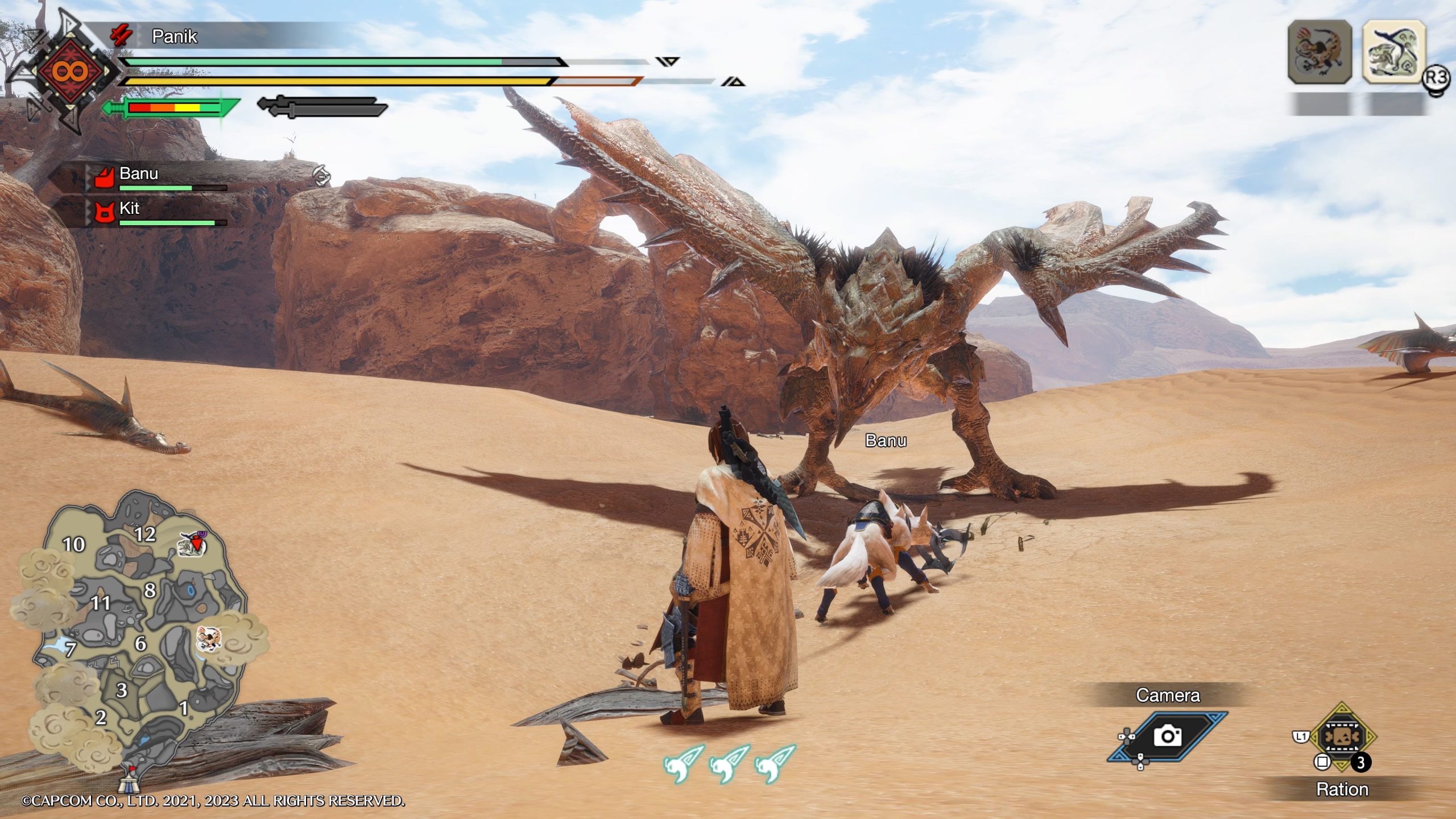 The one part of the game that I STILL struggle to grasp is using the wirebugs. I understand what they’re used for, however I struggle with the execution of their uses, especially traversal, like scaling cliff sides. I did get really good with using them to mount monsters that had gotten into fights with each other to do some big damage, but aside from that they are pretty useless to me at the moment.

One thing that stands out for me is how buttery smooth Rise is on my PlayStation 5. The framerate is variable depending on what’s going on on screen, however, there was never a point where it noticeably dropped. Load times were a bit of a pain with Monster Hunter: World but it’s not an issue with Rise with the transition between locations taking maybe 10 seconds max. My only gripe, if it really even is one, is that graphically Rise isn’t as up to standard as I felt World was. I know this is a port, but I’m still kind of surprised that more wasn’t done in this area. That’s not to say the game looks bad, there’s definitely no shortage of character, detail, and inspiration. Maybe I’m just too picky from being pampered by games like Horizon and God of War where they took full advantage of the next generation hardware. There’s truly nothing wrong with Rise in the graphics department, but there is a noticeable difference when comparing the two games in my opinion. 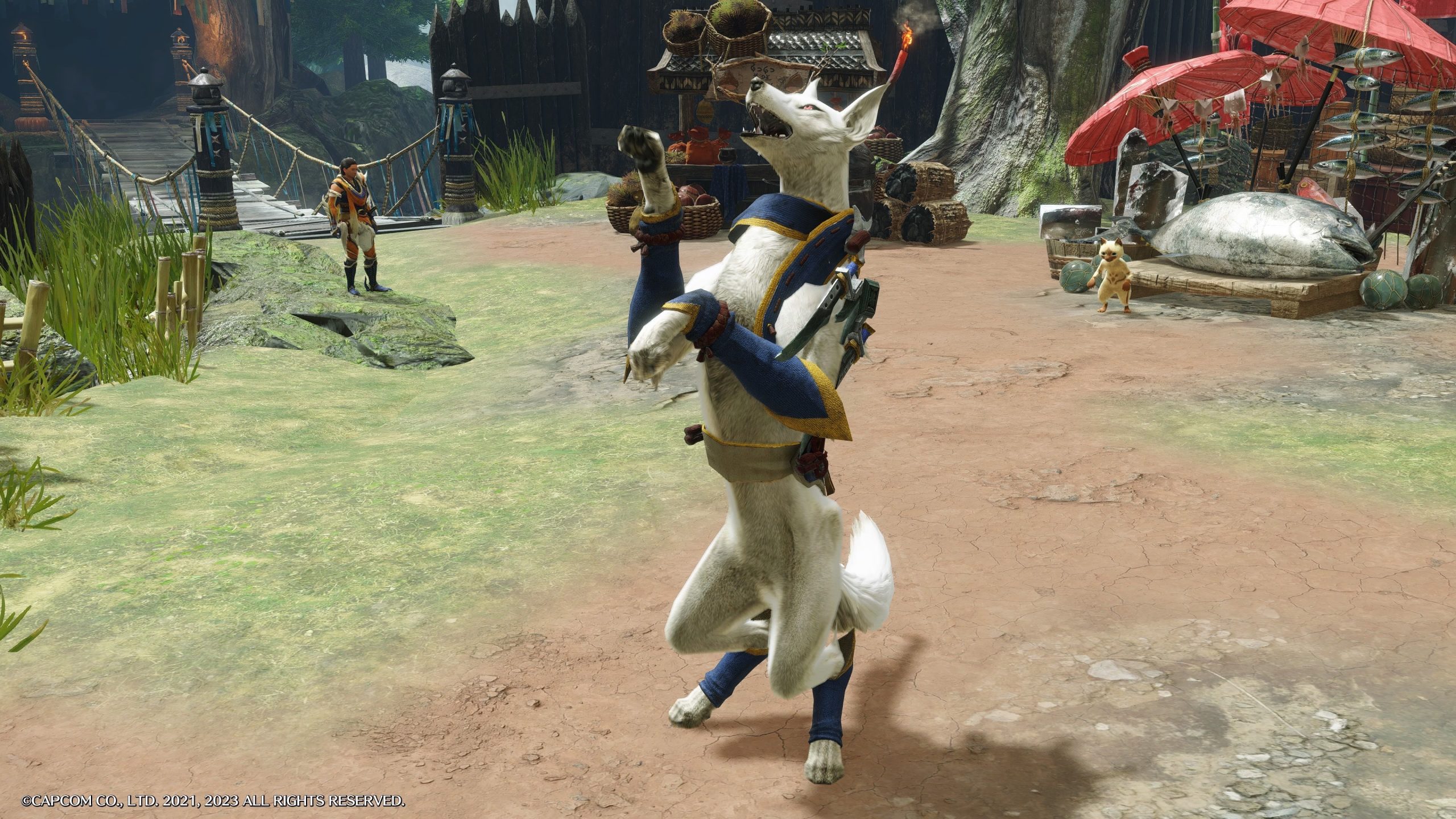 In terms of gameplay, Rise has been a refreshing reintroduction to the series for me. After Monster Hunter: World I turned away from the series, skipping over Stories 2 entirely as the Stories games hadn’t really piqued my interest. It is a little daunting to restart the grind for gear and to ascend the Hunter Ranks again, which is why I don’t play MMOs anymore. Unlike with World, I don’t have a co-op partner for Rise, which can make some fights a little more difficult if you don’t want to queue up with randoms online. However, after diving back in for this review, and discovering the dual blades are so much better than the bow in Rise, I can see myself sinking a lot of time into this one. Monster Hunter Rise isn’t as long as Monster Hunter: World, clocking in at roughly 21 hours versus World’s 65 hours, but if you are trying to grind it out for all the gear and doing all the extra events, you’ll still easily sink over 100 hours, especially with the Sunbreak expansion coming to PlayStation and Xbox in the Spring.

Monster Hunter’s return to PlayStation (and Xbox) is a very smooth transition. The game performs perfectly and gives more players the opportunity to head to Kamura Village for another awe inspiring adventure.

Cassie Peterson is an Editor for Gaming Trend but also a sporadic content creator and exceedingly average Rainbow Six Siege player. She goes by MzPanik on Twitter and Twitch and all of the gaming platforms.
Related Articles: Monster Hunter Rise
Share
Tweet
Share
Submit