As video game franchises become more popular, they tend to get tons of spin-offs as the years go by. The best example of this is the Super Mario series, with games like Super Mario Bros., Mario Party, Mario Kart, and much more. With the popularity of Dragon Quest, it came as no surprise when Mincraft-esque Dragon Quest Builders came rolling out in a similar fashion. Now it’s time for the sequel to show its stuff and give players a chance to fight, build, and explore once again.

There was once an evil group called the Children of Hargon. A legendary builder used their remarkable talents to defeat their leader Hargon and the malevolent deity Malroth. Even after much time has passed, remnants of the Children of Hargon are still spread out across the land, inflicting pain and suffering on the people. You awake on a slave ship after having been recently captured by a faction of the Children. A storm hits and causes the ship to crash, stranding you on a mysterious island. This is where you meet a mysterious amnesiac named Malroth, a lost girl named Lulu, and the guardian spirit of the island. This guardian tasks you with restoring the island to its former glory, and it seems that the only way to do so is by venturing out to other islands and acquiring skills and helpers alike. Thankfully for you, a sailor stumbles upon the island and offers to be your ride. This is where your adventure truly begins. 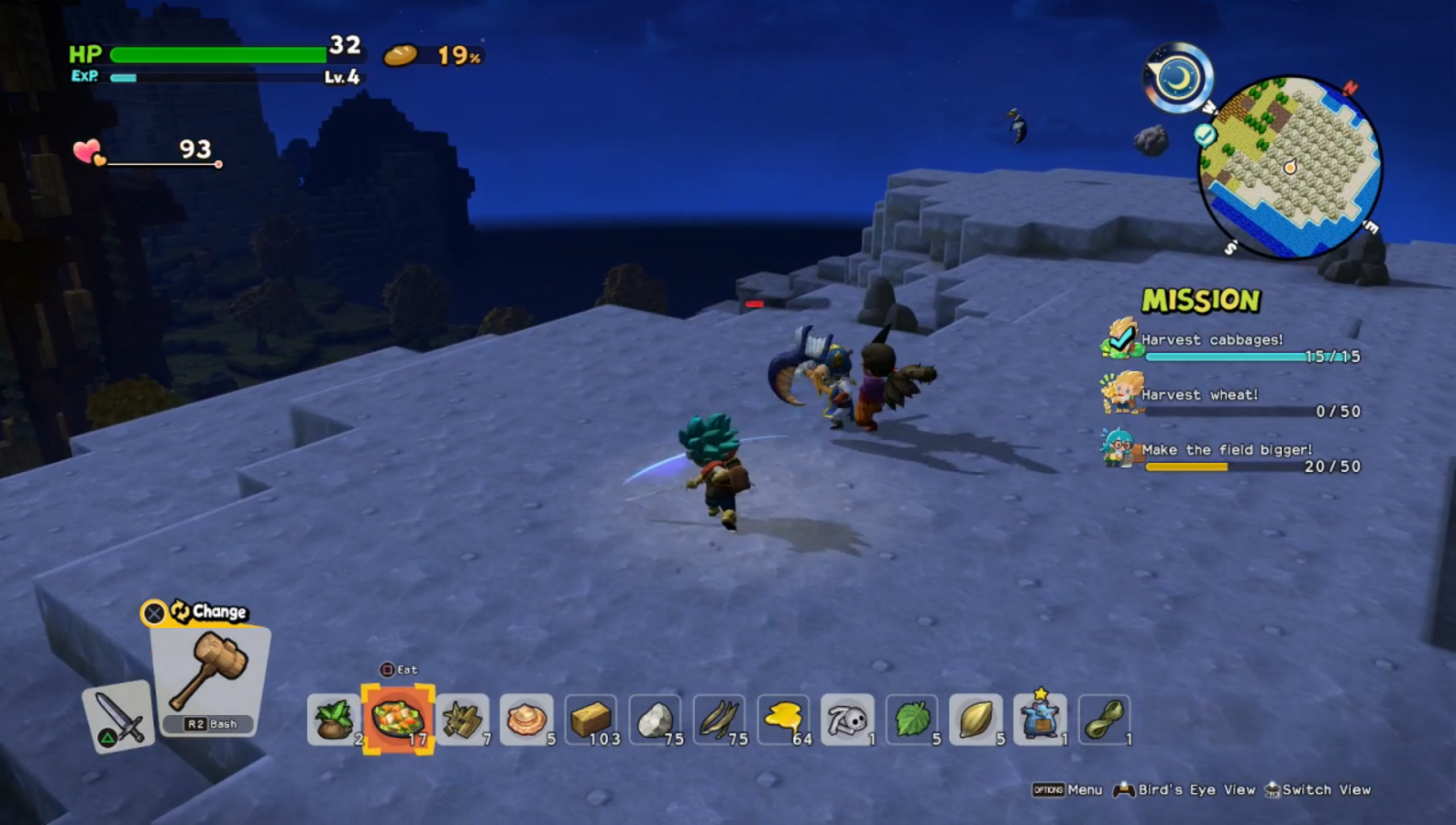 You start the game off with nothing and slowly get some tutorials on things like combat, crafting, and building. In terms of combat, you have to make your own weapons, but the bright side is that you don’t have to worry about durability or anything. Once you’ve crafted and equipped a weapon, you’re ready to fight. You start off by learning to make a cypress stick, but you’ll soon learn how to make swords for yourself and maces for Malroth. In order to craft weapons, you need the correct materials and an anvil to work from. As you defeat monsters, you’ll get experience and level up. Leveling up grants you an increase to max health and an increase to Malroth’s strength. The combat itself is easy: one button to attack, then run out of the way to dodge. This simple fighting style is refreshing and lets you put more emphasis on the building aspect of the game.

Speaking of building, the game does a great job of making it the forefront of the experience. You being a builder isn’t just a title you’re given; in fact, it actually foreshadows how important it will be to the story. Whether you’re using a workbench to craft items such as scarecrows, bonfires, hardwood blocks, doors, and much more, or you’re setting up homes, fields, and the like, building is the key to your progress. You’ll acquire materials by defeating monsters, harvesting them from the wild, opening chests, and completing quests. If you make sure to gather as you explore, you’ll rarely have to take the time to focus purely on grinding out materials. That’s a relief because grinding can be tedious and boring. 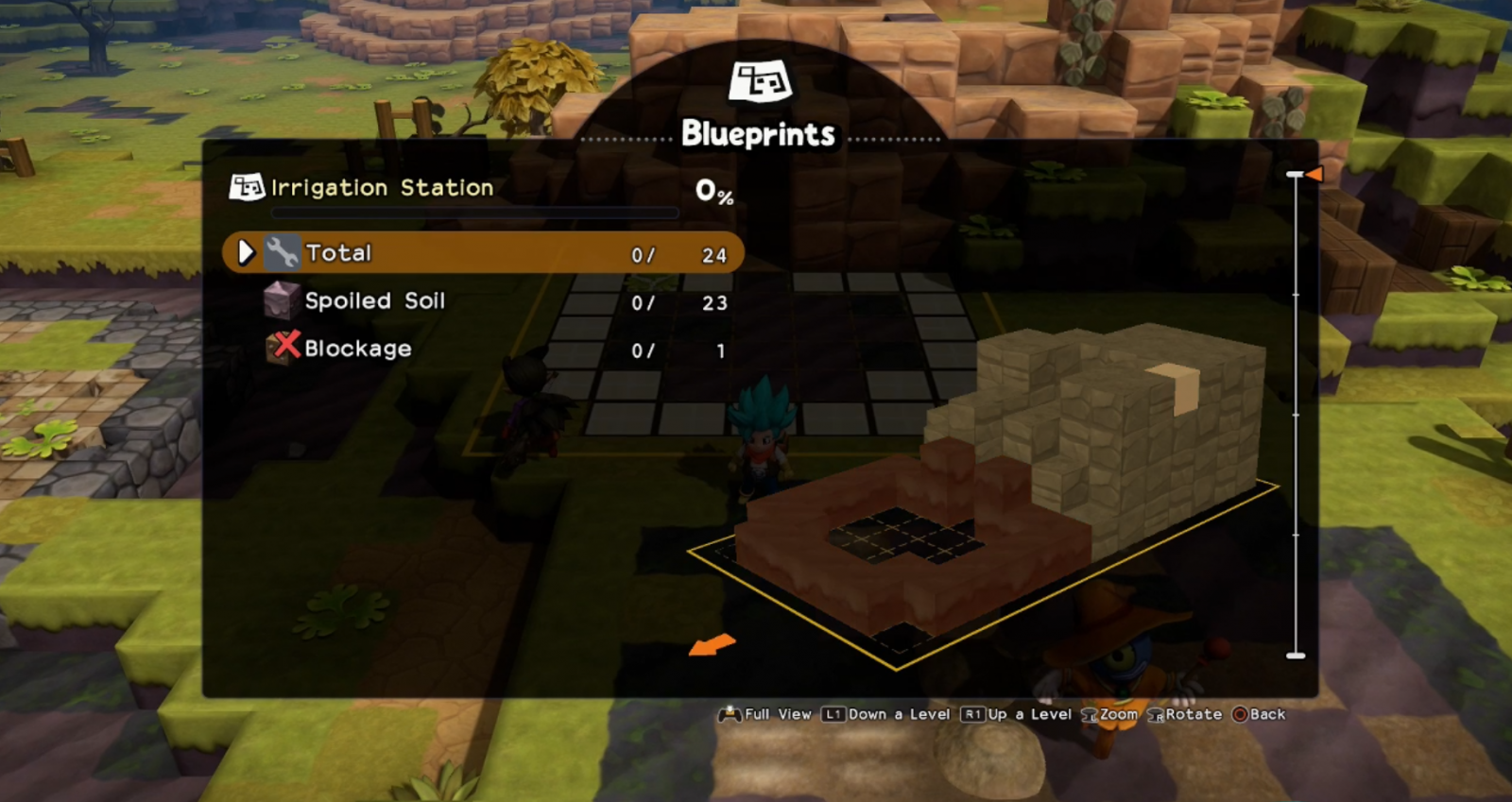 Blueprints are another important part of building. There are moments in the game where you’ll be tasked with building some special structure. Your character will quickly develop a blueprint and lay it out where it needs to go. From there, you are shown what materials you need, how many of each, and the exact layout they need to be placed in. It even keeps track of how much you’ve completed already, so you don’t have to remember it on your own.

One aspect that can be hit or miss in games is dealing with hunger. Some games implement it successfully, while others make it a chore. Luckily, Dragon Quest Builders 2 leans towards the former. You have a hunger percentage that slowly drops as time passes, with it going down a bit faster during combat and running. It makes sense since you’re using more energy. If it gets too low, you won’t be able to run or string together combos until you’ve eaten. You refill your hunger by eating, with different foods being worth different percentage points. If you use a bonfire to cook the food, then it becomes more effective. In addition to refilling a portion of your hunger, eating also heals some of your health. That double benefit is pretty helpful, especially if you’re starving and hurt. With the amount of food you can harvest, along with farming, you don’t have to worry about running low on things to eat. In that regard, the hunger system actually felt fine. 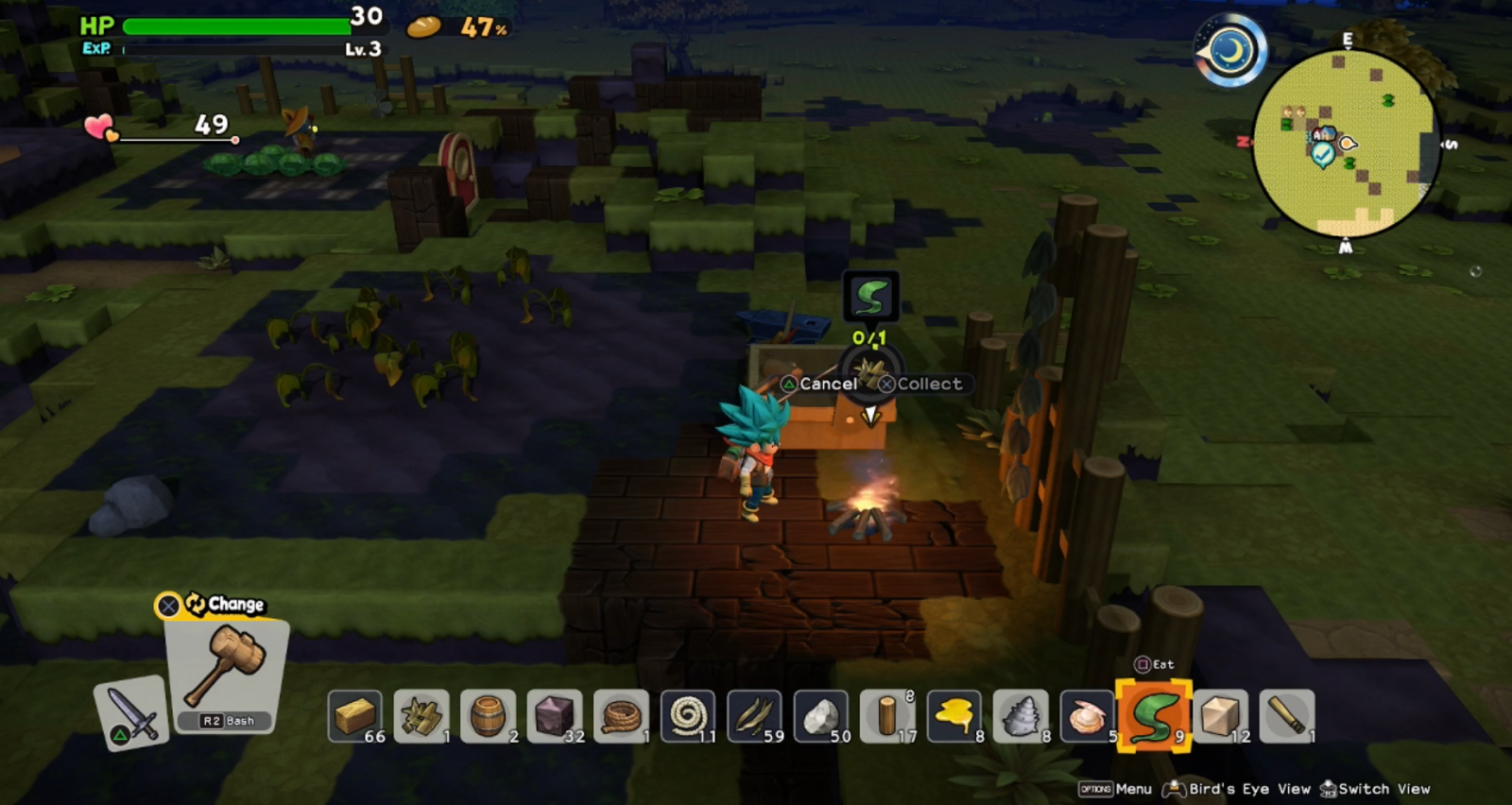 The game follows the main quest of exploring other islands as you attempt to learn new skills that can help you revitalize the Isle of Awakening. The first island you sail to focuses on teaching you about farming. The developers found a way to incorporate these learning experiences into the story well enough to make it feel like you were actually progressing rather than just playing an overblown tutorial. Along the way, you can also take on sidequests to obtain more materials. Another key aspect of this first island was base building. As you perform tasks for the members of your group and provide them with amenities, they’ll drop hearts. These hearts are gratitude points, which are added to your base meter. When the meter hits a specified number, you can hit the town’s bell in order to rally the citizens and raise your base’s level. Increasing the base’s level rewards you with more items to build and it makes your group more helpful in performing tasks around the base. You also have to worry about occasional monster raids, so be ready for unexpected fights.

Graphically, the game is colorful and cartoonish in the best way. The characters are endearing in a goofy way, which allows the game to keep a relaxing tone. The casual nature of the game makes it easy to pick up and play, although you’ll likely end up playing for hours. Whenever I played, I never wanted to play for any less than two hours. That’s probably for the best, because it’ll take a lot of time for you to finish the story, especially if you take your time exploring. All in all, Dragon Quest Builders 2 is a great follow-up to the original, although some aspects of it can be a bit bland or tedious.

Dragon Quest Builders 2 is a great follow-up to the original, placing you in the shoes of an amateur builder. The main story practically amounts to a fetch quest of acquiring skills and people, but that doesn't bring the game down much. Building takes the forefront, and it will definitely keep you busy.

Codi loves to play video games and watch movies. He will watch almost any kind of movie just to experience them. His ideas take inspiration from the shows and movies he watches, and games he plays. He also loves a good pun.
Related Articles: Dragon Quest Builders 2
Share
Tweet
Share
Submit