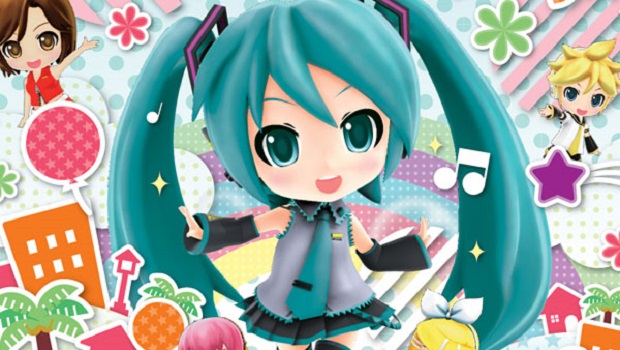 The music/rhythm genre is on the rise, it seems. After the long drought for the genre that became bloated with countless rhythm titles in the mid 2000’s, it appears the planets may have aligned once again in favor of those gamers with a passion of hitting buttons along with music queues. The recent announcements of Rock Band and Guitar Hero making a harmonious return to the gaming scene might prove that gamers are still interested in the once overwhelming genre, as long as there is still uniqueness and originality. Does this port of a 2-year-old music game on the 3DS have what it takes to stand up to that scrutiny that rehashes of the past few years have created?

If you’re unfamiliar with Hatsune Miku and the semi-recent Vocaloid phenomenon from Japan, well, this would be a pretty good place to familiarize yourself with it. Developed by Crypton Future Media, Miko is a singing personality voiced by synthesizers. That’s about it. Mix that with some catchy J-pop plus a pretty likeable personality, and you can start to understand the appeal of Hatsune; an appeal huge enough to merit a line of video games.

The game’s primary attraction are the rhythm sections, which make up a huge chunk your time. Very similarly to the first Project Mirai, during the music segments you’re presented with a very stylized and actually pretty well choreographed animation of Hatsune Miku or one of her friends. It plays out like a music video with plenty of colorful eye candy, most of which you won’t be able to see as you’ll be too focused on the on-screen prompts. The top screen plays the video with button or tapping prompts, while the bottom screen is where you’ll be doing all of your tapping. If you’ve ever played Theatrhythm Final Fantasy, then you’re on the right track of picturing what this game plays like. I was disappointed by the lack of features, however. There just aren’t different game modes to add more variety to the way you play all the songs.

One huge improvement that separates Project Mirai DX from the original is that you are no longer restricted to just button pushes to play the song. The awkward and older style of play is still there if you prefer it, but tapping to the rhythm of the song with your styles is overall a much better experience. As you go up in difficulty, there are some pretty neat tricks this game uses to ramp up the toughness and it’s more than just adding speed and number of triggers to tap. Harder difficulties split the bottom screen into multiple color sections, which you’ll need to go back and forth on while following on screen commands. You not only have to focus on hitting the notes at the right time, you also have to make sure you’re hitting the right color section on the bottom. Similarly to Theatrhythm, there is a variation in tapping, sliding the stylus in different directions and holding the touch screen. Higher difficulties in button mode simply add more buttons to press, with the occasional use of the analog stick.

Hatsune Miku is, of course, the star of the game, although plenty of her friends are available right from the start, giving you a total of six different characters to play as. While these characters don’t affect gameplay whatsoever, they do offer quite a bit of extra content for you to delve into when you’re not tapping along to your favorite songs. This mainly comes in the form of apartments that you can place the characters in. You can decorate their rooms, buy them different outfits, interact with them and even give them allowances. Doing these tasks unlocks  animations and options to use in the main game. There is plenty of customization here, which can be intriguing for some time, but I found it to be pretty unimpressive after a few hours and stuck to the music portions. My favorite side content ended up being the Dance Studio, in which you can re-choreograph songs and create tunes. I got some enjoyment out of this, and although not phenomenal in any sense of the word, it is nice that the game offers these many extras to give it more value. It definitely has more extra content than your average music game.

Project Mirai DX certainly doesn’t disappoint if you know what you’re in store for. The very specific Nendoroid art style (super-deformed and cutesy with giant heads) might turn off some gamers from even giving it a shot because it portrays the game as being childlike, and therefore not challenging, but that couldn’t be further from the truth. As you get used to the controls, the more than 40 songs in the game offer multiple levels of difficulty, not to mention two different methods of playing every song, by pressing buttons or by tapping the screen. If it weren’t for the admirable amount of extras, collectibles, variations of gameplay and customization, this would’ve been another mediocre rhythm game, but all that combined puts Hatsune Miku: Project Mirai DX just a tiny bit ahead of the competition. Not bad for a music game about a fictional J-pop star.

Hatsune Miku: Project Mirai DX excels in all the right places as a fun and portable rhythm game, but doesn’t quite impress with its multitude of extra content. I do commend it for giving the player plenty of bang for their buck, even if it’s mostly forgettable.