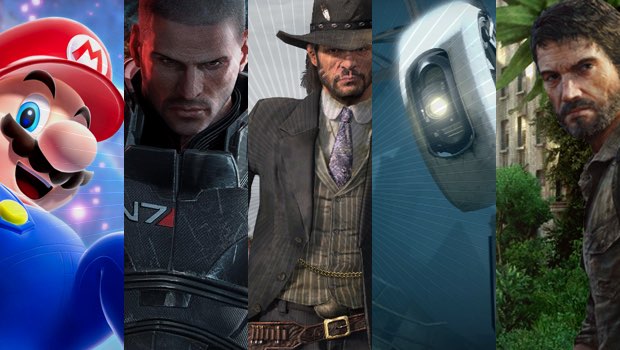 It all comes down to this, the best of the best.  Narrowing the list down to just 25 wasn’t easy, but we’re happy with the results. If you missed any of the past 20 games already revealed, you can find them through the links below.

So without further ado, these are the top 5 games of the last generation:

Home. It’s a simple concept, a place of peace and sanctuary, one far away from the evils of the world. It’s the driving force that keeps the protagonist of Red Dead Redemption, John Marston, moving and shooting. And it’s that honest humanity that makes Red Dead such a radically different game from the open world games that came before, and even after, it.

Coming from a Texas boy, let me tell you: Red Dead nails the rural Texas atmosphere. Beautiful plains, vibrant sunsets, seeing as far as the eye can see, Texas is well-represented here. The wildlife of the Wild West, both the animals and the less-than-savory criminals, are portrayed perfectly. There’s tons of amazing side-quests and activities to pursue, and the soundtrack is pure Western excellence.

But it all comes back to home. Marston’s story of an outlaw who just wants to stop running and find his peace is a truly compelling tale. You’ll wrestle with his demons, make some compromising decisions, and be ready to sacrifice any and everything, just to ride back to homestead. Marston’s final scene in the game is a tear-jerker, as is many points in the game leading up to that. Red Dead Redemption isn’t just the best cowboy game ever made, it’s one of the best redemption stories in a game as well. – Eric Van Allen, Editor

If the point of video games is simply to have fun then Super Mario Galaxy is a reminder of why we play them in the first place.  Unlike the majority of other games on this list that create overall experiences based on story, atmosphere, or challenge, Super Mario Galaxy stands out as a title that favors pure gameplay above all else.  When it comes to representing the classic mantra of “gameplay is king”, Nintendo’s achievements with Galaxy were out of this world.

There isn’t a single area of Super Mario Galaxy that wasn’t expertly crafted.  The movement and platforming was spot-on, yet still simple enough in nature that even the most casual of gamers could play a level and instantly grasp what needed to be done to succeed.  The level design is some of the most top-notch ever seen in this industry and each setting was filled with bright and enjoyable visuals.  And the soundtrack is an orchestral masterpiece that drives home the sense of adventure and wonderment in every level.  There really isn’t a single gameplay aspect that is anything less than excellent.

It may not have the freedom of Grand Theft Auto or emotional weight of The Last of Us, but Super Mario Galaxy really proved that you can have just as memorable of an experience based solely on the quality of your gameplay.  When it comes to being a game based on pure fun, few titles can hold a candle to Super Mario Galaxy, this generation or otherwise.  – Matt Welsh, Editor

In games, players are often taken to a place out of their reach.

Games take us to galaxies we’ll never see and time periods we never got to live in, but there are some that aim to capture a less fantastical experience in favor of something human, something grounded. Few have been able to tell a story like this as incredibly as The Last of Us.

Joel and Ellie’s story undermines everything we’ve been conditioned to expect as players. The Last of Us doesn’t let you be the hero. The Last of Us doesn’t let you win. Instead, it repeatedly bludgeons you with reminders of the reality of this world you’re playing in, and this story of survival is only elevated by the way it makes you care. This sense of desperation The Last of Us instills in the player is unrivaled, and it’s pervasive as you play through the game’s stealth and resource-driven combat.

What makes The Last of Us so special isn’t just how it tells a human story in light of the apocalypse, but it’s in how it manages to maintain that sense of investment and danger in every moment, whether the player is in control or not. The tale of Joel and Ellie forgoes the showmanship we’ve come to expect and commands your attention in a way that the most games can’t replicate. – Kenneth Shepard, Lead News Editor

How do you create a sequel to one of the greatest games of all time? How do you take what is already considered an example of video game perfection and make it better? Portal 2 did just that. Yes, it’s that good. This is about as close to perfection as a single video game can hope to be.

With Portal, Valve came up with a very simple idea of using portals as a device to deliver some of the most challenging and mind-boggling puzzles you can imagine, accompanied by an amazingly funny script and one of the most recognizable gaming villains in Glados. With the sequel, Valve managed to capture everything that made the first so great and improved on every single aspect, giving us an experience that is simply genius. Pure genius.

The new puzzle mechanics are a spectacular new addition; some of which play into the game’s final moments. I won’t spoil a thing for anyone who hasn’t played it  but the moon is involved. Yes, the moon. Every room you step into presents a new challenge that may seem daunting at first but will give you all the tools you need to figure it out without telling you a thing, but this game is so flawlessly designed that you’ll feel like a genius every time you complete one. Portal 2 is an amazing portrayal of this medium at its finest and one of the genuinely funniest games you will ever play. Simply put, Portal 2 is a masterpiece that every gamer needs to experience. – Paul Cesar, Features Editor

While Bioware could only present the Mass Effect trilogy as a story about Shepard fighting the Reapers, these games were something so much greater than a simple synopsis could ever truly convey. Mass Effect was a five-year-long journey that we all took, but even so, none of us experienced it in the same way.

Through Shepard, we experienced this universe, these characters, and this story in ways that will never be identical to that of the friends we discuss it with. The choices you make may end up similar, but they’re always carried out with a reason that’s your own. The people you became close to may have been the ones that someone else had to end the life of, the species you helped prosper may be the one that another damned to extinction.

Mass Effect required a level of investment of all of us that no game before it has, and that no other game has even come close to since. To some it’s a love story, to others it’s a thought-provoking space opera, and then there are those that just see it as one soldier’s fight to save the galaxy. It was a tale that we all left being able to tell, but it’s one that’s never told the same way twice. Mass Effect is one of the most ambitious undertakings the industry has ever seen, and has solidified itself as a medium-defining story that will be talked about for years to come. – Kenneth Shepard, Lead News Editor