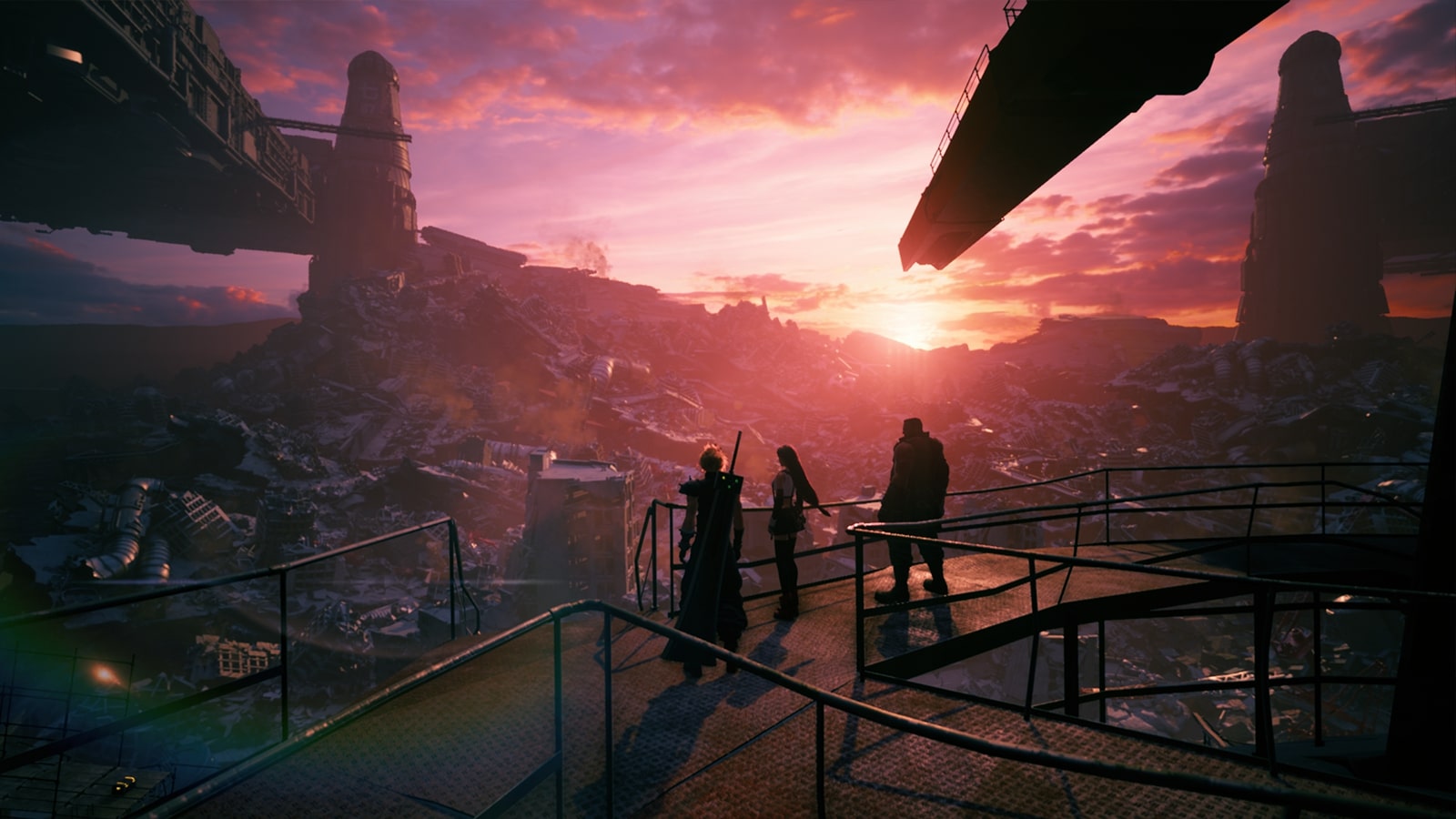 Cloud Strife, with his signature spiky hair and unwieldy Buster Sword, has spent his entire public life as one of the JRPG genre’s leading mascots. Anyone who’s even held a controller in their hand since Final Fantasy VII’s debut has been touched by the title in some way. To many, there’s no piece of media more important; we’re talking childhoods defined by mandatory after-school viewings of Advent Children and entire friend groups built upon a shared love for “the greatest story ever told.” Our own Kay Purcell reviewed the remake through a similar lens last year. My first brush with destiny, however, wasn’t the grand event I thought it’d be; I originally played Final Fantasy VII on my PlayStation Vita close to a decade ago. At the time, all my teenage eyes could see were hilariously polygonal characters with awkward proportions living on a display that wasn’t particularly kind to someone who enjoyed his lengthier adventures on a bigger screen. It was a journey well worth the time commitment, but what I’d really wanted was the same magic that enraptured everyone else. Needless to say, the remakes are perfect for players like myself. Plus, as someone who’s most comfortable on PC, what better opportunity would I get to experience Final Fantasy VII in 1997, in 2021? 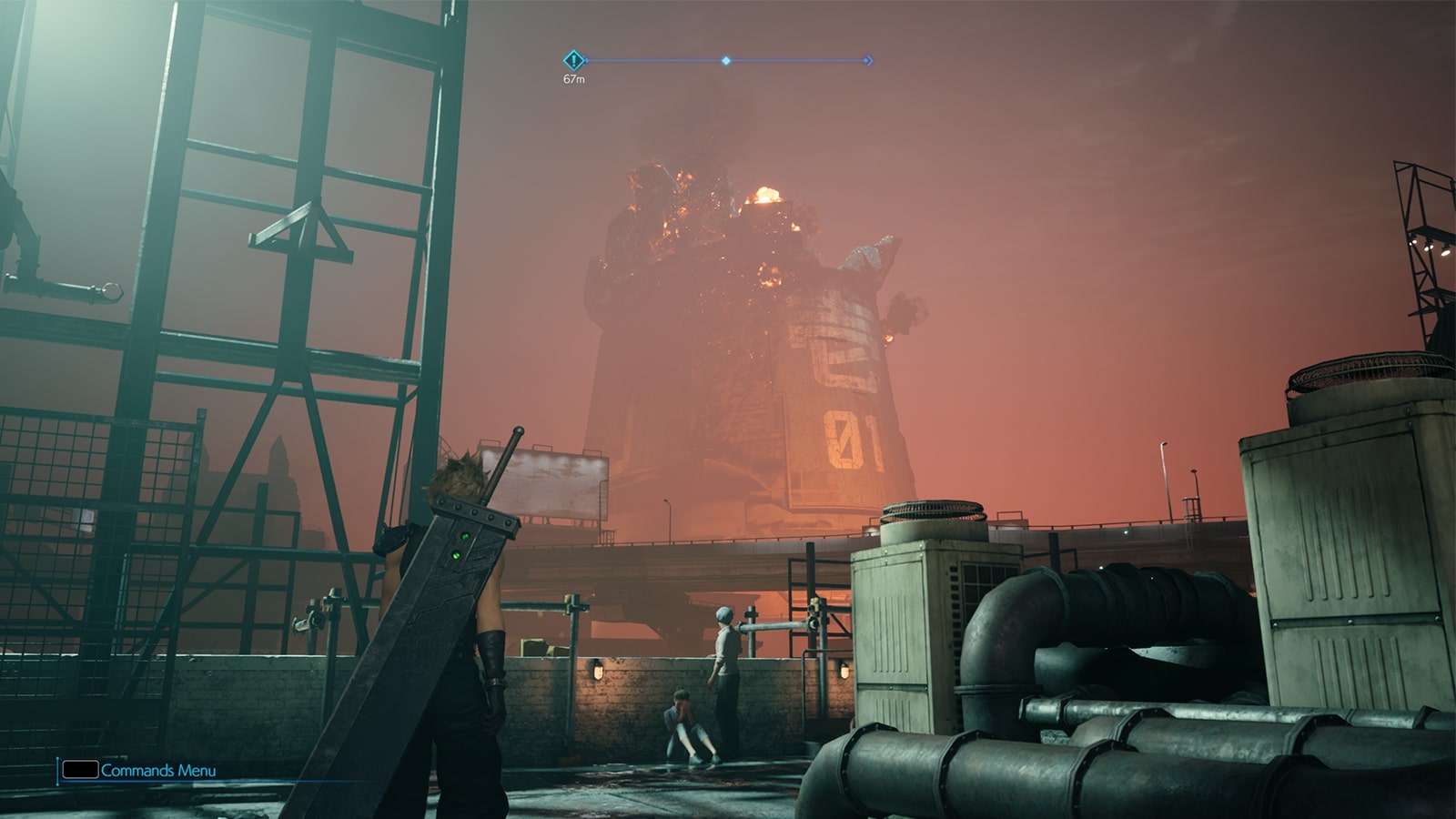 The Final Fantasy VII remake reimagines the first act of the original as a 30+ hour action-oriented thrill ride with new sub-plots, characters, and an elegant, modern interpretation of the ATB combat system. Intergrade slaps an extra 4 hours on top of the base game with the Yuffie-led INTERmission side story. First-class visuals put those old pre-rendered cinematics to shame while a revamped soundtrack juggles paying its respects to Nobuo Uematsu’s legendary score and introducing some new flavors. The incredible voice acting, across every provided language, does so much to sell the emotion in every beat of the story, both old and new. This remake is everything everyone enjoyed from Final Fantasy VII lovingly translated to the modern day, right down to the cinematography — albeit with some modern-day genre problems as well.

The only thing that could’ve possibly elevated my experience is a PlayStation 5, or at the very least, a controller. The sole benefit of the PC port is the possibility of 120 frames per second, which Final Fantasy VII Remake Intergrade seems intent on keeping out of reach. To say the settings menu is barebones would be an understatement; there are virtually no graphics options to tweak your performance. And, even then, some have reported less-than-stellar performance regardless of their fiddling in the menus. I had the game running at 1440p, 120 fps on my desktop sporting a RTX 2070, Ryzen 5 2600X, with 16GB of RAM, and the opening hour put my PC through the wringer — frequent stuttering and then some. But, in the hours that followed, performance was surprisingly stable, hovering at around 90 fps save for the semi-frequent drops below 60 when things got busier on-screen. 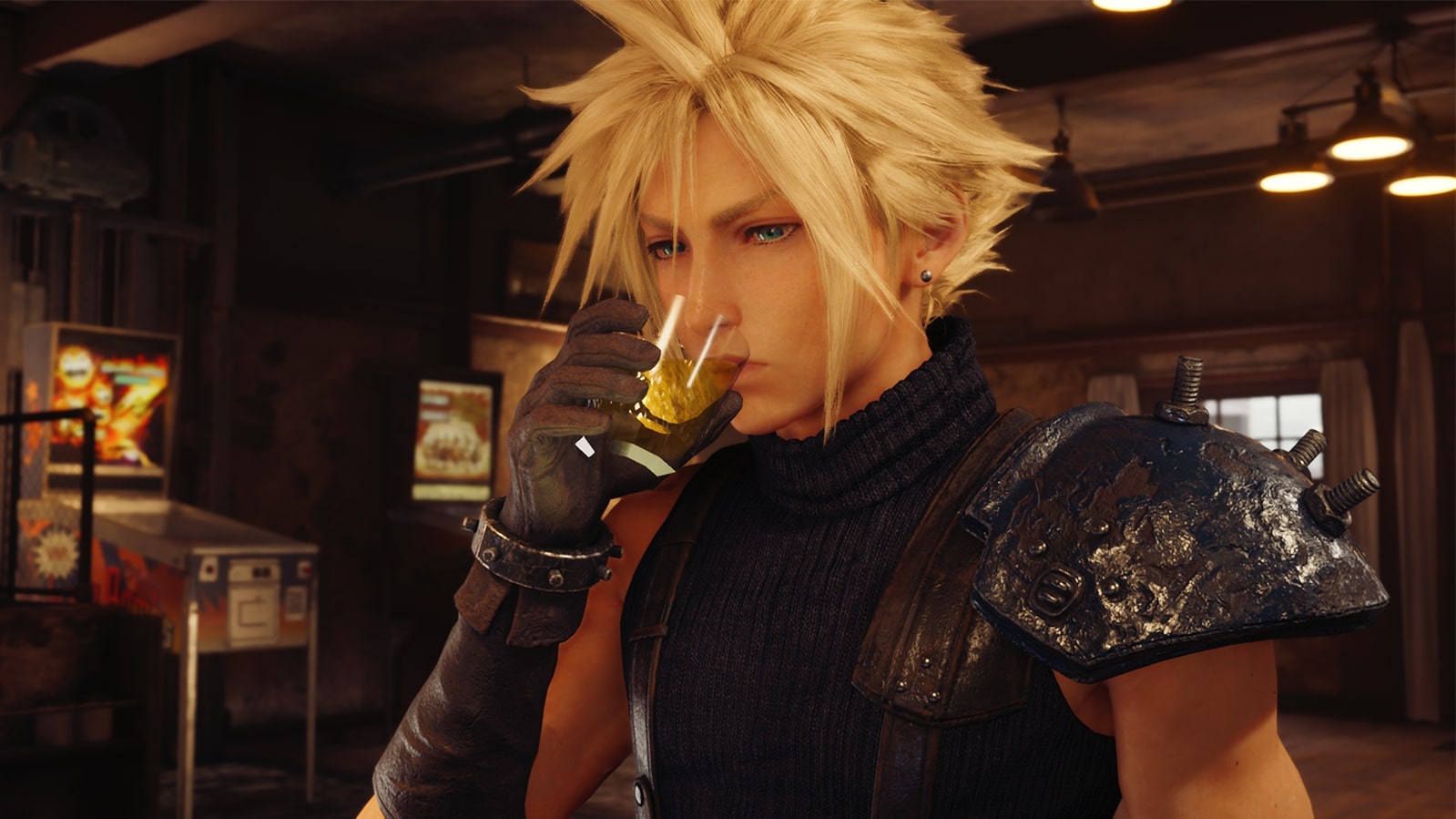 Can’t argue with 4K Cloud, though.

With one thorn in my side attended to, I could focus all my energy on grappling with the other: the PC controls. There was arguably no worse time to misplace my Xbox One controller. Although the inputs are remappable and the general movement/combat controls are serviceable, the game is loaded with a myriad of minigames and mechanics, all with their own idiosyncratic control schemes that can’t be accounted for. Sometimes, it’s more comedy than inconvenience, like seeing a giant prompt for the ESC key mid-puzzle; other times, I was left completely dumbstruck by the absolute audacity of this game. In one especially iconic rhythmic segment, the minigame called for ABXY — the face buttons on an Xbox controller. Only, there was no controller, just several white-knuckled minutes stressing over the placement of the literal ABXY keys on the keyboard. On the bright side, I was closer to understanding Cloud’s confusion at that moment than any player in history.

The remake, Intergrade included, is defined by its meticulous pacing and structure — its greatest strength, and potentially, weakness. It’s a steady stream of action, drama, and spectacle, with lighthearted lollygagging and somberful reflection interspersed between; an 18-chapter theme park rollercoaster that’s always acutely aware of when to lay off the gas and when to crank things up to 11. Never are players worn down by endless combat and challenges, nor made apathetic by extended periods of downtime and menial activities. I welcomed lengthy cutscenes with open arms because they came after tense battles or arduous treks, and because their contents never disappointed. Batches of side quests are introduced strategically every few chapters to give players the opportunity to appreciate Midgar outside of action-packed set pieces and the drama of the main story. 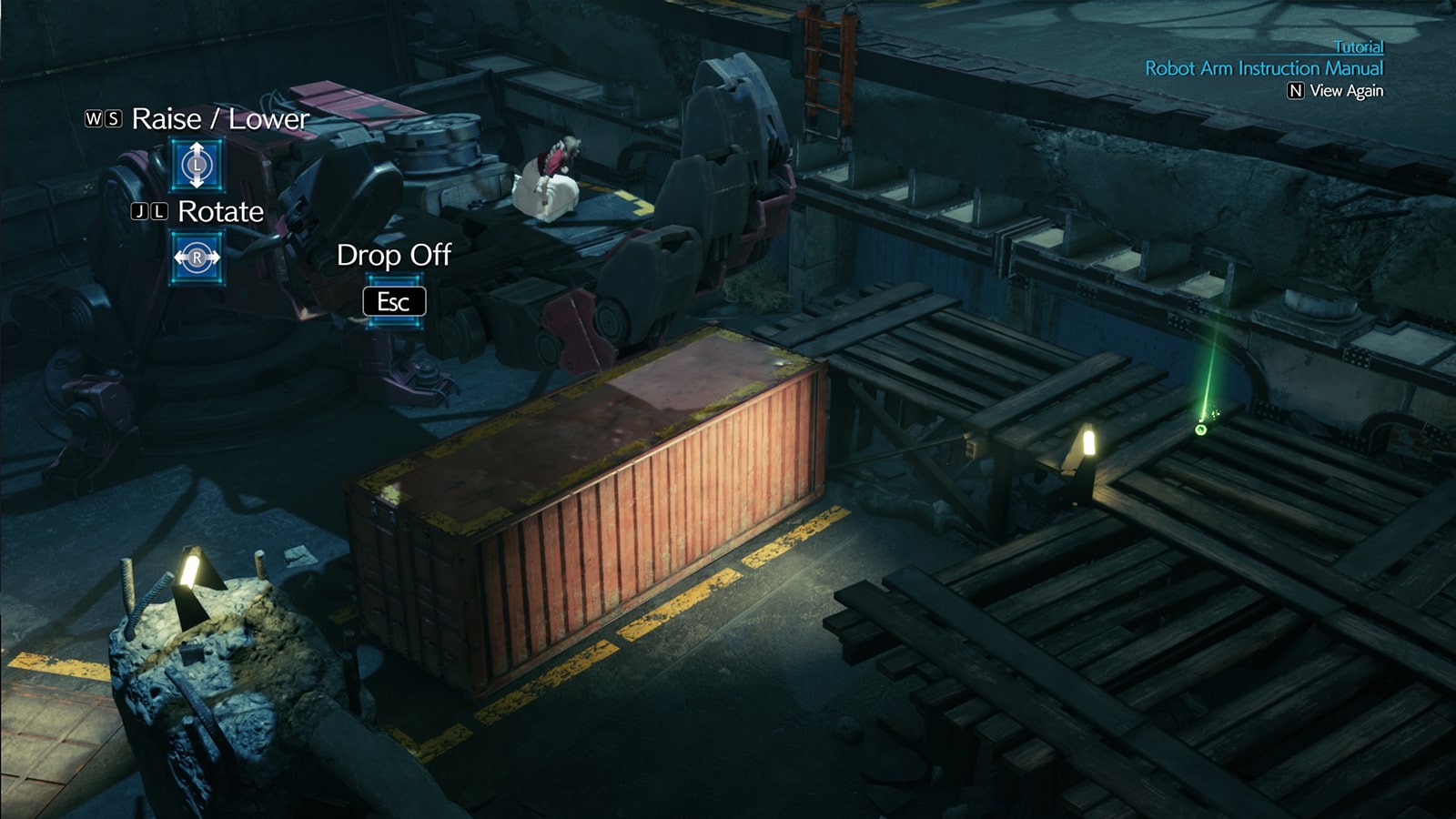 On a moment-to-moment basis, the meticulous attention to the ebb and flow of the experience reads as more stringent and claustrophobic than careful. The remake opens up with a lengthy but gorgeous interpretation of the original cinematic, before handing the player the reins for all of one second; another (brief) cutscene before I was even able to get my bearings. (In the original, the first fight is triggered after you’ve walked the length of the train platform.) In isolation, little annoyances like these are nothing, but whether it’s slowing Cloud down to a crawl just for a character to deliver an inconsequential line of dialogue or pausing the action to hop over a little debris, the game has a way of breaking players like me down slowly and thoroughly over the course of many hours. Every action is an event; that little traversal maneuver every odd minute is accompanied by a uniquely sluggish pace (and maybe camera angle), that new vista Cloud and crew approach seizes control from the player, or any number of other things that add up over time.

It’s genuinely frustrating how the remake demands that every player witness every beat of the game exactly as it expects them to all the time. I’d certainly miss out on some of the minutiae without its micromanagement of my experience, though that extra bit of control over my personal adventure seems like a fair trade. Loosen the leash if only just a little; I can’t even count the number of times I had my finger on the Control key (yes, sprint is on Control by default) just hoping that it was helping. If you’ve ever held the Shift key until your pinkie hurts, send thoughts and prayers my way. Controller — get one. 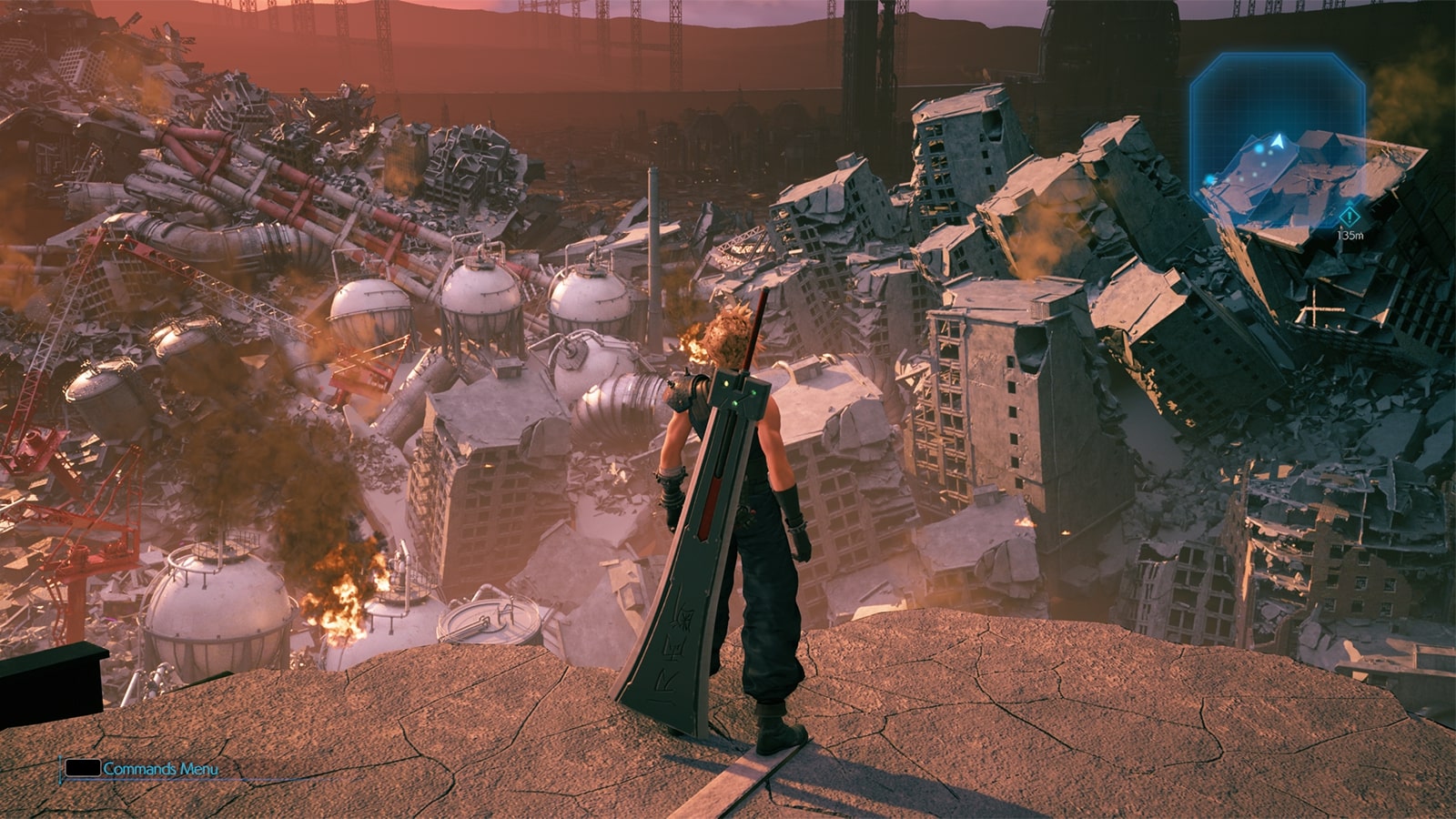 Looted it all, until there was nothing left.

As its own experience, Final Fantasy VII Remake Intergrade is at its best when it leans into linear action. It’s a game built to deliver spectacle, style, and drama, but perhaps in being confined to what it’s allowed to adapt, it ends up with fewer “flavors” of adventure or what one might expect from a JRPG bearing the Final Fantasy name. Why not lean into what’s great about the first act and play to obvious strengths? As a piece of compelling storytelling, the remake is very convincing; all the important beats hit hard and fast, and my emotional investment grew exponentially until I was one cool camera shot away from literally exploding. Everything else, while not necessarily chores, pale in comparison to the golden path.

There’s a lot stuffed into the remake that works to create richness on the level of content, and to promote the perceived depth of its many systems. The side quests are virtually all fetch and kill quests dressed up with loose, inconsequential stories. Again, the structure of the experience ensures that side content is introduced at the right places and times, but much of the rewards — in regards to worldbuilding and loot — and combat experiences they offer make them seldom worth seeking out. One-off inclusions like dialogue choices influenced by materia levels attempt to encourage exploration of its systems but never really prove their worth either. Hi-potions, ethers, and all the rest fill smashable boxes and chests that populate Midgar’s underbelly — all of it a distraction that undermines the urgent tones set by the story for no purpose other than being a JRPG staple. Rarely is there a reason to snag loot beyond scratching the completionist’s itch, and that comes at the cost of narrative flow. Levels are at their best when they’re stripped of loot and push players forward — or when I’m so engrossed I forget loot existed.

It’s the small details that make players fall in love with a game, and vice versa. Final Fantasy VII Remake Intergrade does so much right, both as a remake and its own experience, but it’s loaded with little quirks and design considerations that dull its shine over time. There are plenty of small moments that work in its favor — offhand comments by party members that celebrate their dynamics, understated camera shots — that are in constant conflict with the other half. And make no mistake, my concerns extend to its contemporaries as well, yet most games aren’t so easy to forgive. However, the remake spreads out its spectacular set pieces and killer story moments so effectively that its flaws are completely overtaken when it really matters. 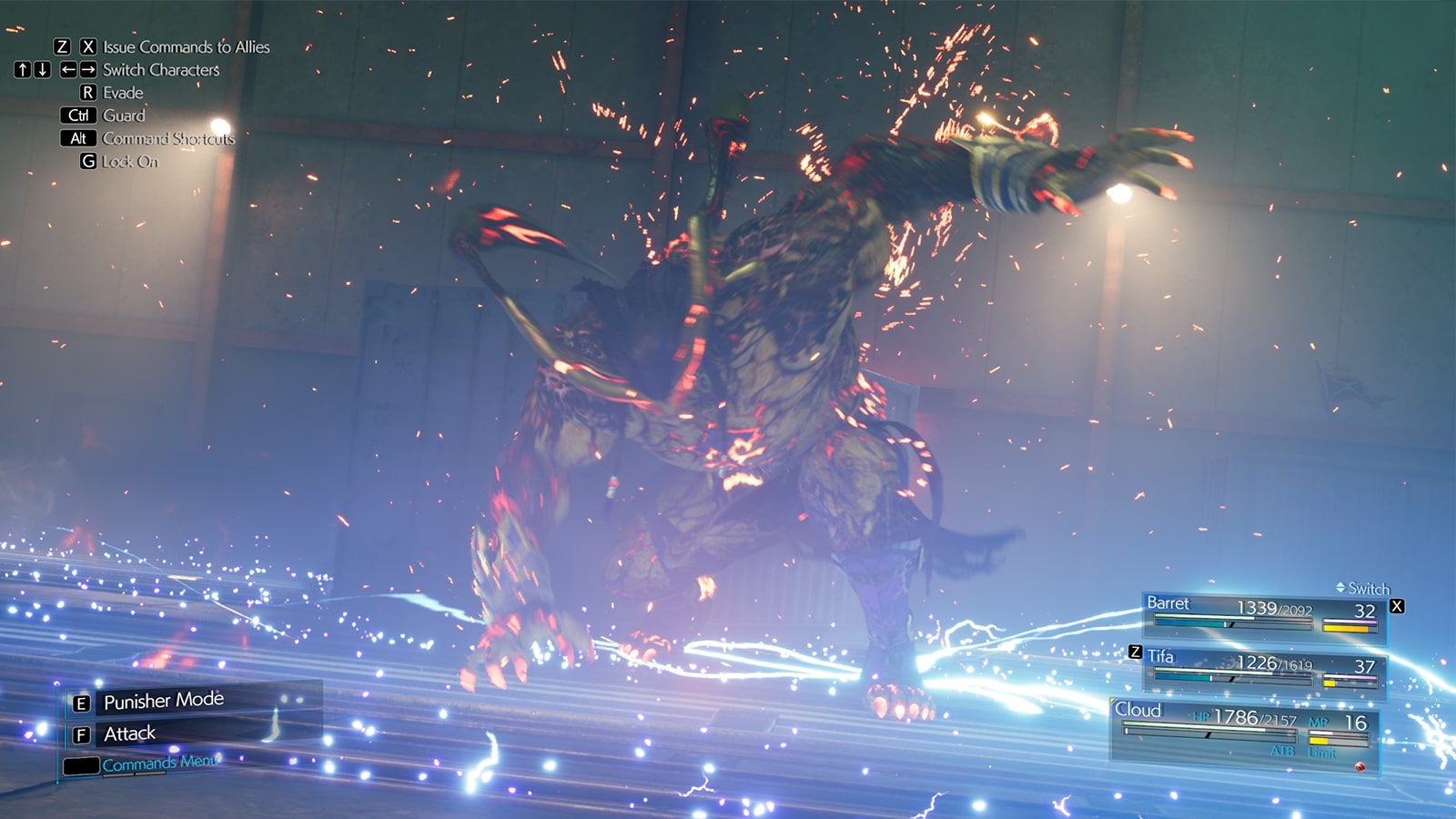 High-quality from start to finish.

INTERmission continues the trend of delivering high-quality gameplay with top-notch storytelling, but parts ways with a few of the elements that dragged down the base experience. Action is the name of the game, right down to its jazzy, upbeat soundtrack and energetic cast. Yuffie and newcomer Sonon are a dynamic duo whose combat mechanics call for even more speed and style. Both can operate as a single unit with the synergize mechanic, allowing players to focus on controlling Yuffie with Sonon complementing and buffing her skills automatically. While there are side activities in the form of minigames, including the new Fort Condor board game (a spin on the Condor War minigame, also with awkward PC controls), INTERmission cuts back on the dilly-dallying and trims unnecessary features to emphasize an even flow of combat, more combat, and puzzle-solving. The DLC lets you experience the same city through a different lens and at a better pace, with a few of its own surprises to boot.

Final Fantasy Remake Intergrade, as a complete package, is everything I could’ve asked for and more. “More” includes things I could’ve done without, but when talking about six hours of the original blown up into an engaging 30+, it’s difficult to fault the remake when it does so much so well. Graphics options and quality-of-life improvements for PC would make it the optimal platform to relive some childhood adventures, but as of this review, PlayStation might be a better option.

An authentic reimagining of the first act as a 30+ hour action-oriented thrill ride with new sub-plots, characters, and an elegant, modern interpretation of the ATB combat system. The remake is still best experienced on consoles, however, where solid performance and controls can be guaranteed.

A self-deprecating, overly sarcastic pair of glasses that occasionally possesses a human host in order to partake in the delightful process of playing video games, then immediately complaining about them. When he is not playing games (a rare occurrence), he can be found either writing about things that no one cares about, or haunting the quiet streets of his Canadian suburb.
Related Articles: Final Fantasy VII Remake Intergrade
Share
Tweet
Share
Submit