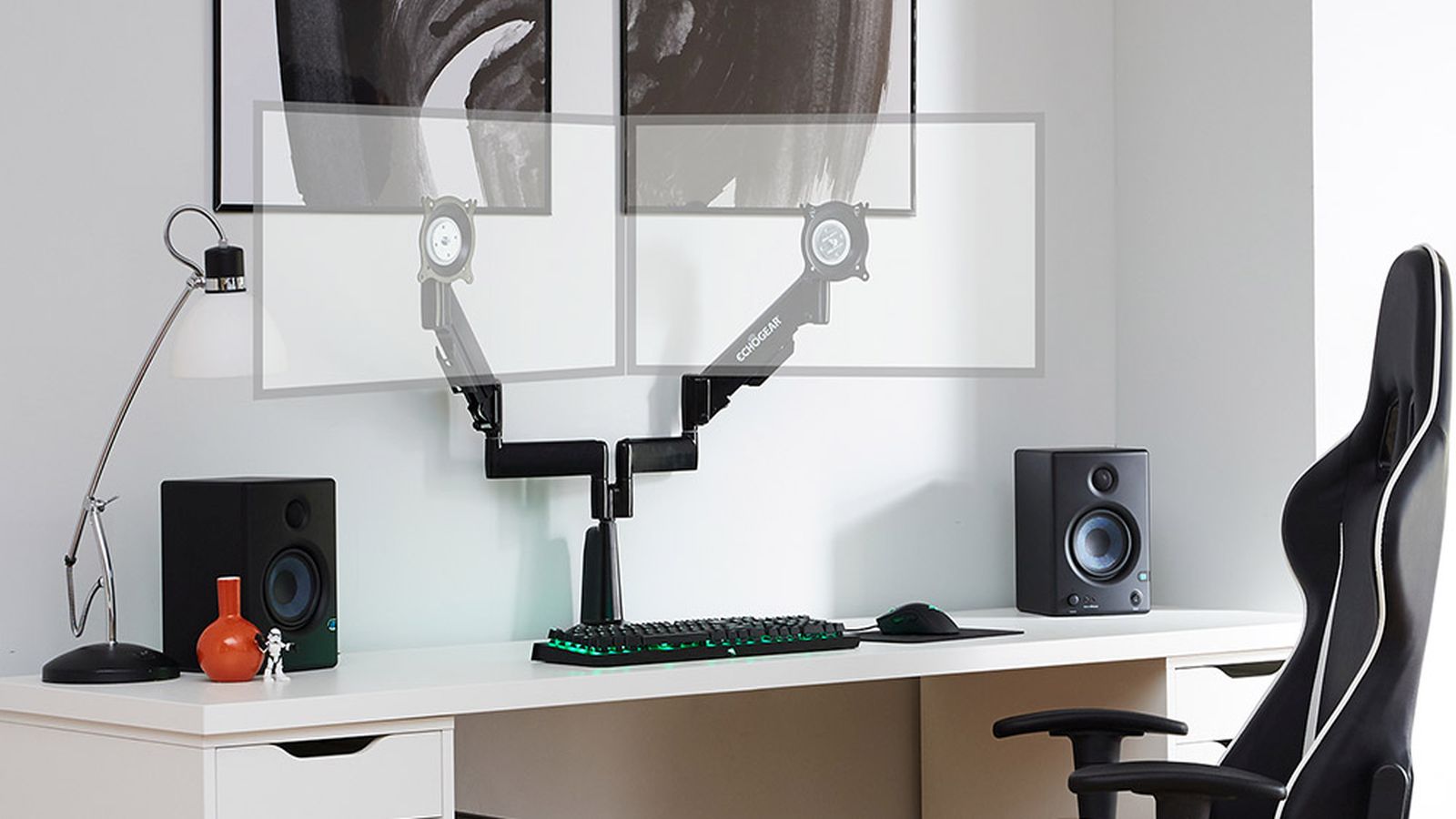 There’s no doubt that we, as gamers, are often deeply invested multitaskers — we watch Adult Swim on one screen while enjoying a rousing game of BattleTech on another. Setting up two monitors means consuming a lot of space as the stands often have a large footprint. Most dual monitor mounts use a VESA backplate (four screws in a square, most of the time) allowing the arms to connect to the back of the device, with others utilizing a sliding bracket. It’s a lot of small adjustments, often resulting in a set of monitors that can move up and down, but are otherwise somewhat static once you’ve settled them into place. I was looking for something a little better than that.

I’ve recently gotten my hands on a new gamer-focused double mount from EchoGear. As someone who has had an on-again, off-again relationship with a dual monitor setup, I was eager to see if this new mount style could alleviate the reasons I kept removing the second setup from my desk in frustration.

Setting up this monitor stand is a snap. There is no need to drill holes in your desk (mine is over 100 years old — my wife purchased it from a retired Judge as a birthday present, so there’s no way I’d use something that would damage it). Instead, the EchoGear uses a small foot base connected to a rubberized clamp. If it’ll work for my desk, it’ll almost assuredly work on yours. But I’m getting ahead of myself…

It looks complicated. It really isn’t.

You’ve likely heard of EchoGear, but not in the gaming space; they’ve spent their time honing their craft in TV mounts. In fact, they are the highest rated mounts for putting a display on a wall, regardless of size or articulation need. A friend of mine has a 65” monitor that telescopes over a foot off the wall thanks to his EchoGear TV mount. They’ve taken this knowledge and translated it to gaming monitors. Before we talk about what EchoGear brings to the table, let’s talk about why I’ve recently removed my second monitor.

Having a second monitor is fantastic for working on projects, playing games, preparing videos for the site, or just having entertainment running on a secondary display while you work in the primary. However, this creates its own sets of challenges as you spend time trying to get the monitors to line up evenly, or they sit at a height that still causes neck strain. Worse, an abundance of monitors soaks up a lot of space on your desk with large bases sitting underneath to hold everything securely. Multi-monitor mounts can solve this by putting the devices on articulated arms, but if you’ve ever priced them (e.g. Ergotron priced at $299) you understand why most avoid this and stick with the crummy plastic semi-adjustable stands. You can buy cheap pipes to hold monitors, or lower-priced devices from companies like Tripp Lite, but these can only hold up to a 27” monitor, and have only the most minor adjustability. As monitors get larger (but lighter) limiting our desk space, and the ergonomics of longer use hours strain all of our necks, having something that is highly adjustable becomes very important. It’s a little like buying takeout — you can have it hot, taste good, or quick, but you can only pick two.

I had concerns while unpacking the EchoGear Dual-Monitor Dynamic Height-Adjust Mount, (should you want to snap one up on Amazon — here’s an easy link) as it looked a little complicated to assemble. Thankfully, looks are deceiving. Inside the box is one of the best (and surprisingly humorous) manuals I’ve seen in a long time, as well as everything you’ll need, minus a Phillips head screwdriver and (as the manual says) “yo hands”.

When was the last time you laughed at an assembly manual? Good stuff in here.

Set up like a videogame manual, the pages are entitled things like “Here’s your Loadout” to give you an overview of what should be in the box. It warns “Don’t allow children to feed on contents and never use damaged goods!”, and then gives a good look at the contents. The individual parts are also in marked bags, making this stupid-proof, even for those of the highest level of stupid.

With the monitor mounts unpacked, it took just a few moments to attach the gas spring adjusted arms to the base. The arms themselves are pre-assembled, requiring just the last few steps to make them usable. Removing the stand from my monitor is a simple button press, exposing the four VESA backplate standard mount — that being essentially four universally placed screw holes. Pulling the four screws, I replaced them with the included screws that are 2mm longer to accommodate the additional size of the mounting surface. Most monitors will be that easy to swap, but if you have an older model with a rounded surface, indentations, or other odd differences, there are three sets of screw lengths, and two sizes of hold off spacers to accommodate just about any kind of modern display. Mine were easy as they are flat, requiring nothing but the marginally longer screws.

Incredibly easy for a single person to assemble.

The clamp on the mount is rubberized to ensure it doesn’t damage your desk. Expandable from 0.8” to 2.6”, it will also lock onto anything from thin IKEA furniture to a massive butcher block style work surface. With the stand clamped in place, and both arms now attached, it was time to hang the monitors and work on getting them adjusted.

The rubberized clamp and little rubber feet will keep your wooden desk from being damaged.

Mounting the monitors is as well thought out as the rest of the design. EchoGear provides two half-open circles for the top of the VESA mounts. This means you can safely place the monitors in these ‘cradles’ by threading in the top two screws partially and laying it into position. The arms hold the monitor in position to screw in the remaining pair, tightening them until they are securely held. I never felt like I needed a second set of hands to set this EchoGear system up.

Basic mounts have some adjustability, allowing you to flip them to portrait or landscape view by loosening knobs and cranking them into place. They can also be adjusted left or right, but none of them are useful for fine adjustments or view distance. These dual screen mounts from EchoGear handle all of those adjustments, including flipping the orientation and changing view distance without the need for a single tool or knob. Within each “elbow” of the articulated arm is a small Allen wrench adjustment screw. These allow you to set the amount of adjustment resistance in each junction, meaning you can lock it in place, or leave freedom to move them with as much ease as you prefer. In fact, just now I tried to set the orientation to one on top of the other — they don’t articulate quite that much, but they come damn close — they are that flexible.

Getting these into position was a breeze, requiring zero tools!

If you want to dig into the numbers, this mount system from EchoGear can adjust 13.25” up and down, tilt 15 degrees towards or away, and extend towards the user a whopping 20” of travel. On my desk setup, I’m sitting in the center, but the subwoofer on my desk and requisite action figures mean that I have my monitors pushed a few inches to the left, utilizing the larger monitor as primary, and the smaller as secondary. You can flip orientation and even swivel them 360 degrees — handy to swing out your monitor to show someone else what you are looking at easily. The view distance travel helps fix the problem where developers occasionally scale their art to 4K resolutions, but forget that their UI elements need to be scaled up. Being able to get a closer look by swinging the monitor into a closer position rectifies that nicely. Beyond this, being able to raise them to an ergonomic height ensures you don’t strain your neck on a longer play session.

Offsetting or changing orientation is easily accomplished with these mounts.

EchoGear has earned its reputation for high quality, but they also back their product with a five year warranty. Better still, if you have any issues with it, or need some help getting it adjusted or set up, they also provide 24/7 support behind it as well. I like it when a company stands behind their product. The dual monitor setup is $199 retail, so it makes the price more palatable when you know it’s built to last longer than half a decade.

Time to upgrade so my monitors match!

EchoGear has hit this out of the park. The gas spring system makes it easily adjustable for any desk setup, and the whole thing can be set up in a matter of minutes. At a price point a full third lower than its contemporaries, and a warranty five times longer, it’s easy to recommend. I didn’t know how useful these monitor mounts would be, and now I can’t imagine working or gaming without them.

Ron Burke is the Editor in Chief for Gaming Trend. Currently living in Fort Worth, Texas, Ron is an old-school gamer who enjoys CRPGs, action/adventure, platformers, music games, and has recently gotten into tabletop gaming. Ron is also a fourth degree black belt, with a Master's rank in Matsumura Seito Shōrin-ryū, Moo Duk Kwan Tang Soo Do, Universal Tang Soo Do Alliance, and International Tang Soo Do Federation. He also holds ranks in several other styles in his search to be a well-rounded fighter. Ron has been married to Gaming Trend Editor, Laura Burke, for 21 years. They have three dogs - Pazuzu (Irish Terrier), Atë, and Calliope (both Australian Kelpie/Pit Bull mixes).
Related Articles: EchoGear dual screen monitor mounts, Hardware
Share
Tweet
Share
Submit