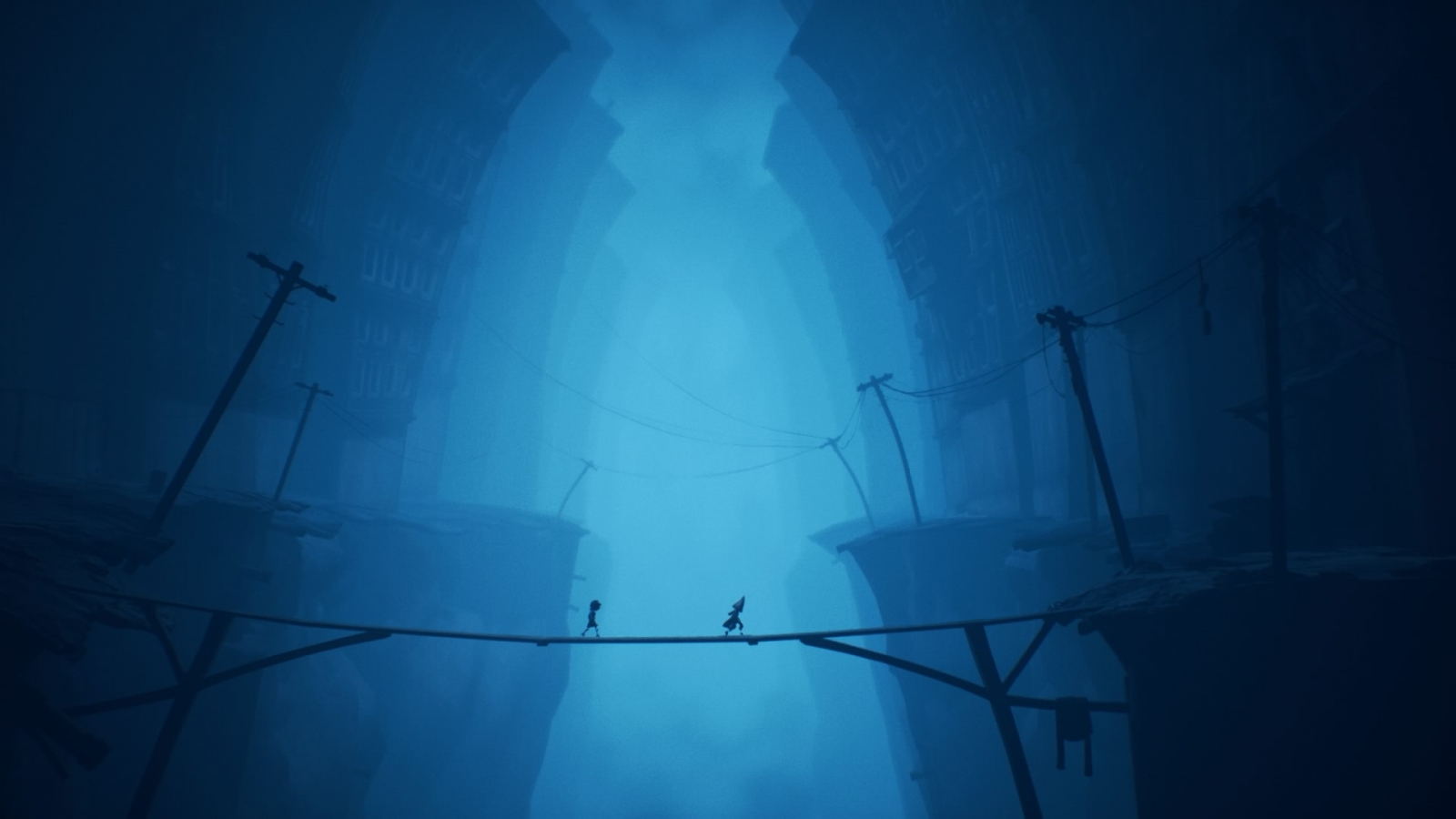 For 6 hours, Little Nightmares II bombards you with subtle, methodical attacks on your senses, breaking you down slowly until even the most unassuming articles become sources of fear. Through the eyes of Mono, anything can be a threat, and this paranoia is what drives the horror of Tarsier Studios’ latest puzzle-platformer. Fear of the unknown is a trick the game uses well, but nothing burns quite as long as a fear fostered by a slow trickle of information, bringing to light things which you rather not have known. And now that you’ve seen it, you can’t help but see it everywhere.

The second entry in the series is longer and more ambitious than the first. The oppressively grim and surreal spirit of The Maw finds a new home in the Pale City; its vacant, rain-soaked streets and dilapidated buildings are filled with treacherous trials and grotesque creatures for our young, paper-bag-headed protagonist Mono and returning favorite Six to overcome. The new playground gives Little Nightmares II plenty more room to work in more scares and puzzles, and it does so expertly, with only minor compromises made. The pair’s path to the Black Tower is meticulously lined with a wide breadth of obstacles to be both appreciated and feared. 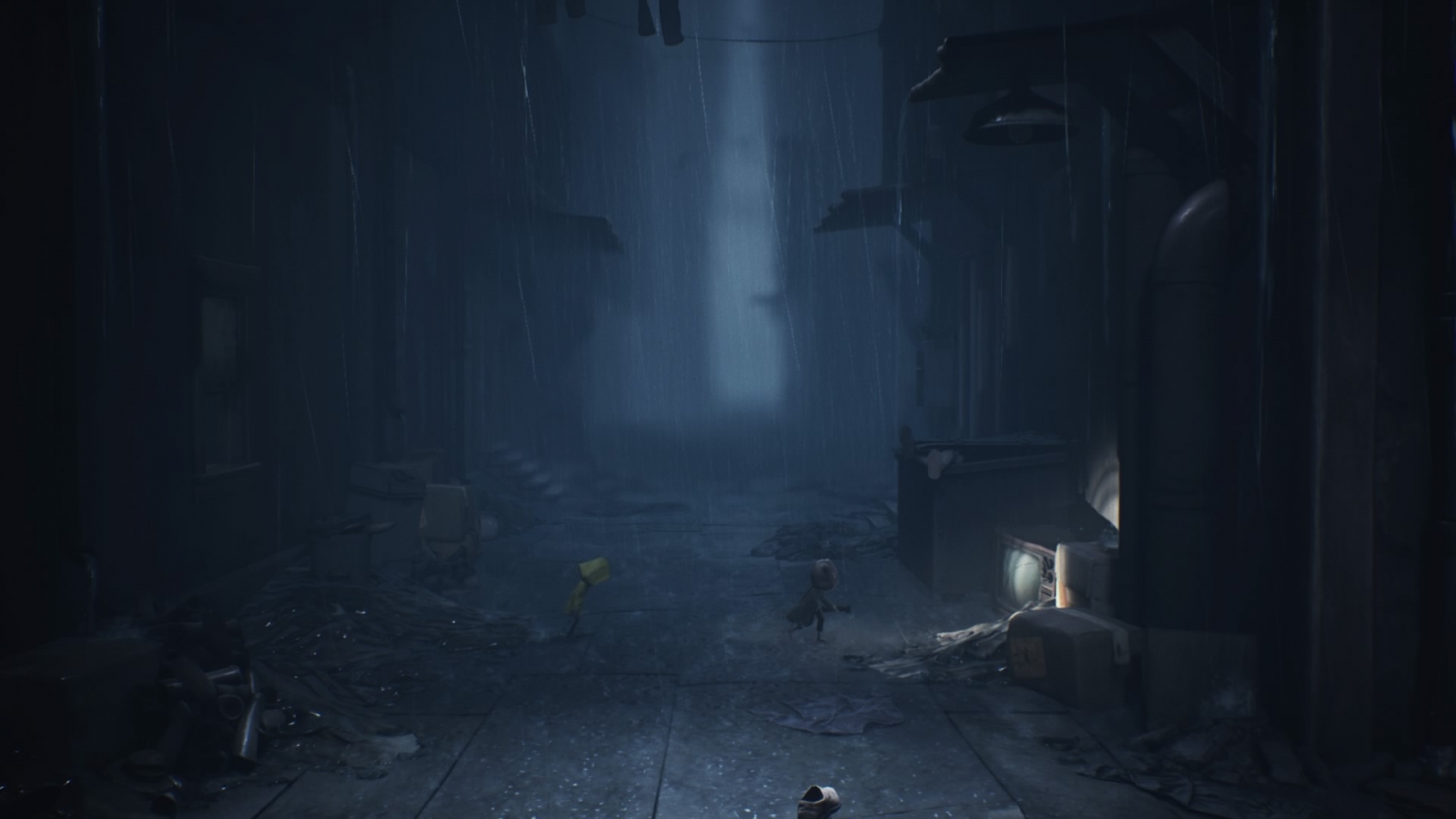 How the game frames every beat of the adventure is the secret to its moody atmosphere and unsettling horror. The bulk of the Pale City is bathed in a ghastly blue fog and a heavy helping of film grain. The odd light source punctuates the environment, illuminating hints and horrors alike. Little Nightmares II keeps music to a minimum to let its outstanding, otherworldly sound design complement its eerie visual imagery. The droning ambience fades in and out at opportune times in tandem with heart beat-like pulsing to highlight the suspense, and make room for creaks and groans that never failed to send me into a panic. Not a second of the experience is spared this treatment; there’s always something to admire every step of the way.

The camera work is another key player in capturing and sharing the emotional experience of Mono and Six’s many struggles. It can pull back to reveal towering structures that dwarf our protagonists, or push in to spotlight the characters and mask their surroundings. The series’ signature claymation-esque monster animations play to a familiar, child-like nostalgia, but contorts it until it’s no longer recognizable. Every element of Little Nightmares II works to re-color what would otherwise be friendly and normal.

There’s no denying the obvious Playdead influence, the design considerations and audiovisual treatments that brought its games to life can be seen all throughout Little Nightmares II. But with the introduction of a companion character and the level design considerations that arise from that, it’s hard not to also see the influence that Fumito Ueda and Ico had on Tarsier Studios. Without words nor complex mechanics, Light Nightmares II paints such a vivid yet macabre picture by marrying the philosophies of its predecessors with its own uncanny perspective. 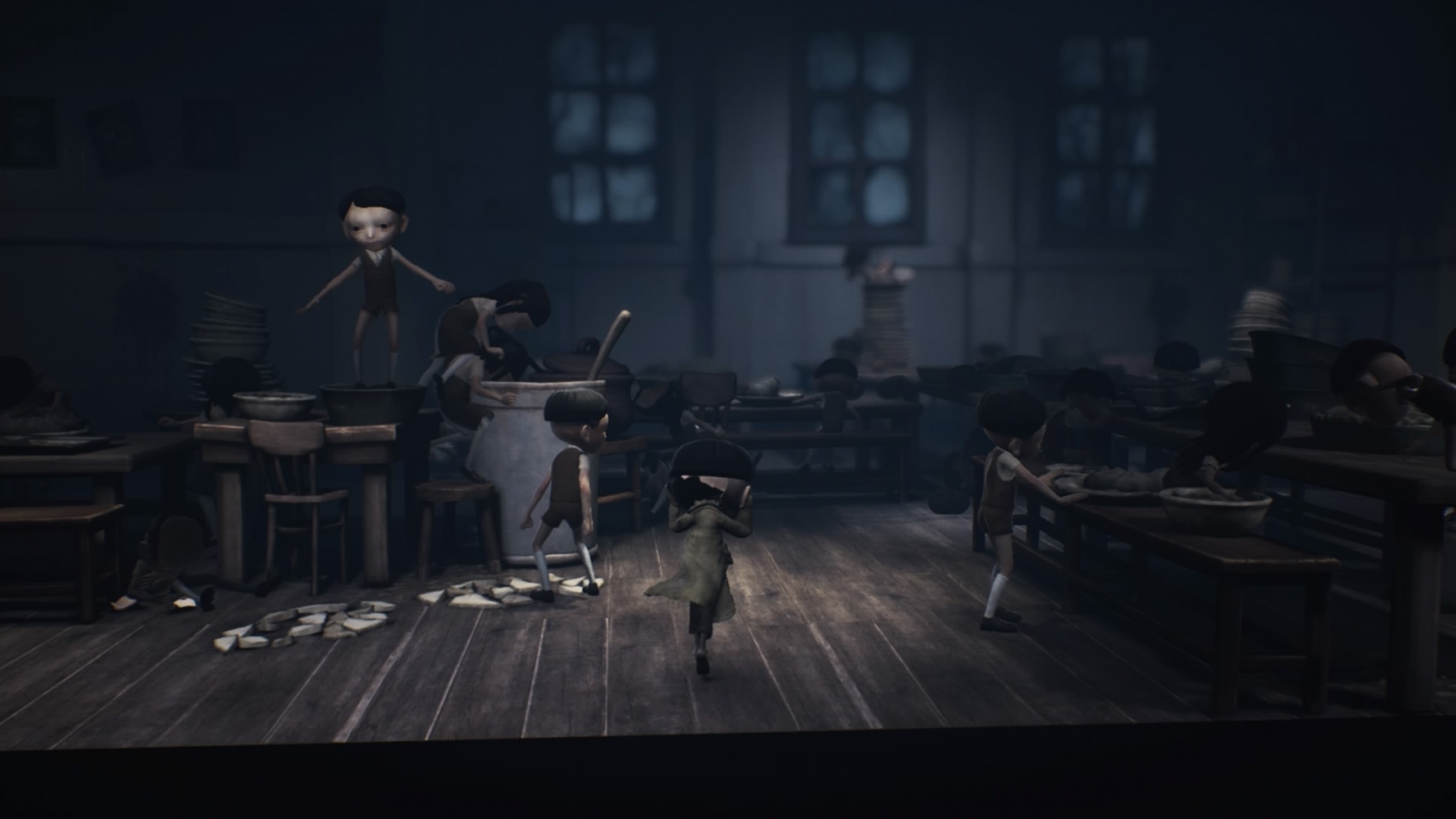 The game opens up with Mono sitting by his lonesome in the middle of a forest, enjoying the company of a television. His arduous trek begins shortly after, starting with some simple running and climbing before the full platformer toolkit gets tossed his way. While Six found success in purely avoiding threats, Mono has several opportunities to face them head on. A myriad of items littered throughout the Pale City can be dragged, thrown, and swung to clear a path. Stealth also makes a return for when the threat is too large for the small-framed Mono to handle.

Soon after, Mono and Six — presumably after her stint on The Maw — are united, opening the door to a few new puzzling opportunities. Six can boost Mono up to ledges that neither could reach on their own, and aid in moving or breaking tough objects. Six herself helps point you in the right direction by motioning towards potential clues and contributing to solutions based on what Mono is currently doing. I had little use for the call command or the handholding mechanic because Six was always one step ahead of me. If anything, Six is responsible for you. It’s an interesting change of pace, although not necessarily a new take on the companion character.

There’s nothing particularly novel about how Little Nightmares II approaches its mechanics and puzzles. Rather, it’s how it contextualizes those mechanics and finds interesting ways to repurpose old puzzles into fresh, engaging content. Every level follows a similar structure: a calm, quiet discovery phase followed by more challenging exploration, culminating in a series of encounters with the area’s primary antagonist. With enough variety in platforming challenges, enemies, and puzzles, the game effectively staves off any sort of monotony. Though certain evolutions of puzzles might not be read as the most creative or challenging, the novel circumstances that surround these puzzles draw attention towards the omnipresent horror and away from any mechanical shortcomings. 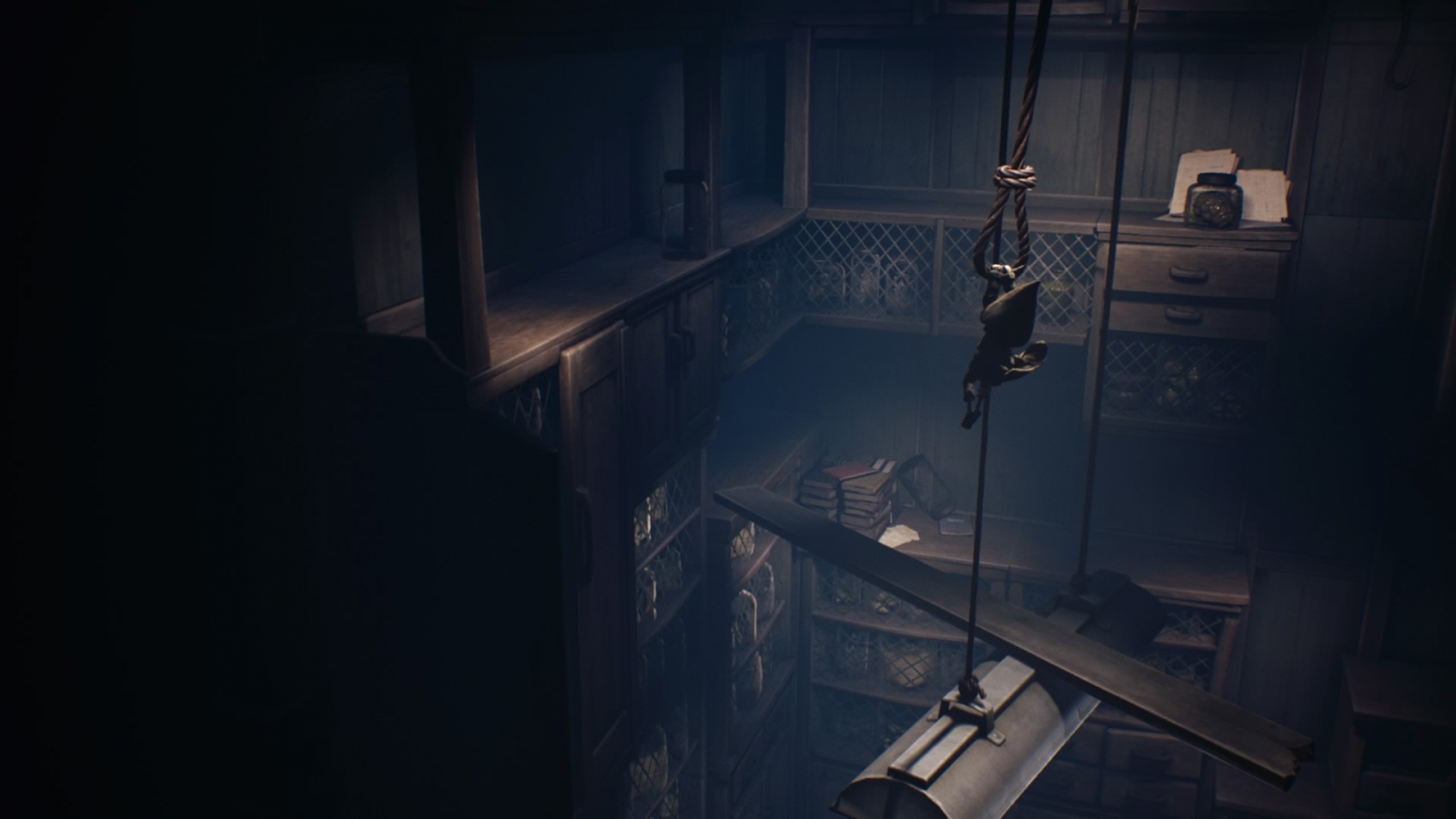 It’s not an adventure game without swinging.

Little Nightmares II strikes a good balance between high-stress scenarios and moments of calm. It’s a ridiculously well-placed rollercoaster ride that does its damnedest to put you in the right headspace to fully engage with its key gameplay beats. You see the scares coming, but that only makes them scarier. Despite Tarsier Studios’ meticulousness, the game’s second half does falter, suffering from a more meandering flow and odd fluctuations in difficulty that result in quite a bit of frustration. Timing issues and the occasional AI misstep, alongside some poor telegraphs and affordances tarnish the experience. These hiccups were only as jarring as they were because Little Nightmares II’s first three levels were polished to perfection.

Many of the narrative quirks of the original make their way over to the sequel. The story remains equally open-ended and vague, perhaps even more so given what we already knew of Six’s time on The Maw. The environmental storytelling continues to impress and gives you more to ponder as you run from a new pool of monsters. Storytelling and gameplay seldom suffer as a result of Little Nightmares II’s greater length. Many of the issues that rear their heads in the sequel were already commonplace in Little Nightmares. The game doesn’t manage to iron out all its predecessor’s flaws, but it certainly unlocks more of the series’ potential. 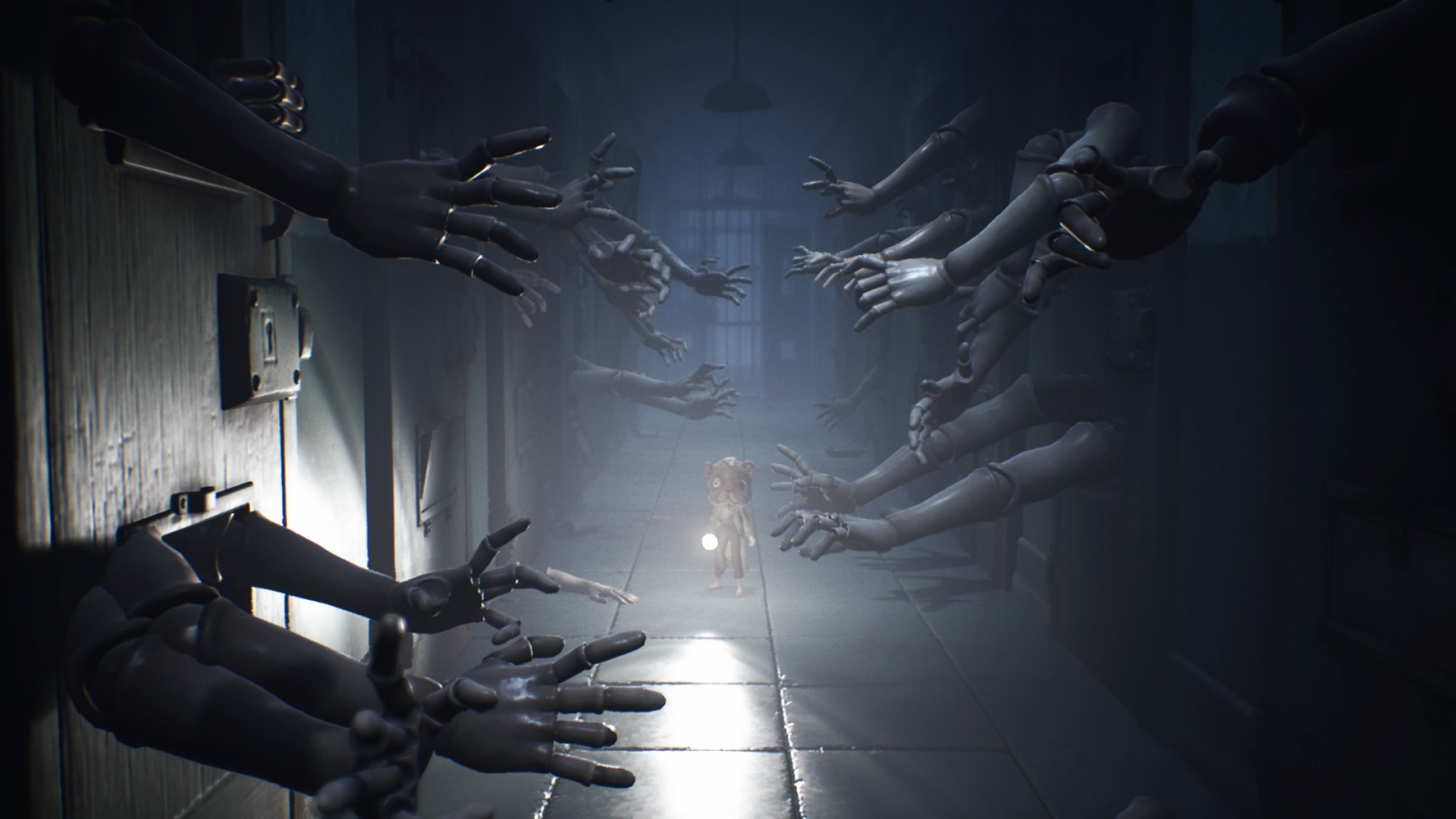 Games of this caliber so perfectly understand what it is they want to deliver, and every facet of experience is in service of this goal. Little Nightmares II is more ambitious, though it sacrifices a touch of consistency in its pursuit of a lengthier, more diverse adventure. At its best, it’s an expertly paced thrill ride with a perfect array of scares, puzzles, and exploration. The horror and suspense dominate the entirety of the experience, only letting up when the credits roll. It continues to stand head and shoulders above the bulk of its contemporaries in spite of a few vexing scenarios.

A visceral assault on the senses, Little Nightmares II drowns you in its thick, moody atmosphere and renders you helpless against the Pale City’s many horrors. It is a meticulously crafted, devilishly clever puzzle-adventure that weaponizes every tool the medium has to offer to terrify you. While it retains many of the flaws that hurt its predecessor, its length, polish, and ambition propel it to the upper echelon of horror games.

A self-deprecating, overly sarcastic pair of glasses that occasionally possesses a human host in order to partake in the delightful process of playing video games, then immediately complaining about them. When he is not playing games (a rare occurrence), he can be found either writing about things that no one cares about, or haunting the quiet streets of his Canadian suburb.
Related Articles: Indies, Little Nightmares II
Share
Tweet
Share
Submit