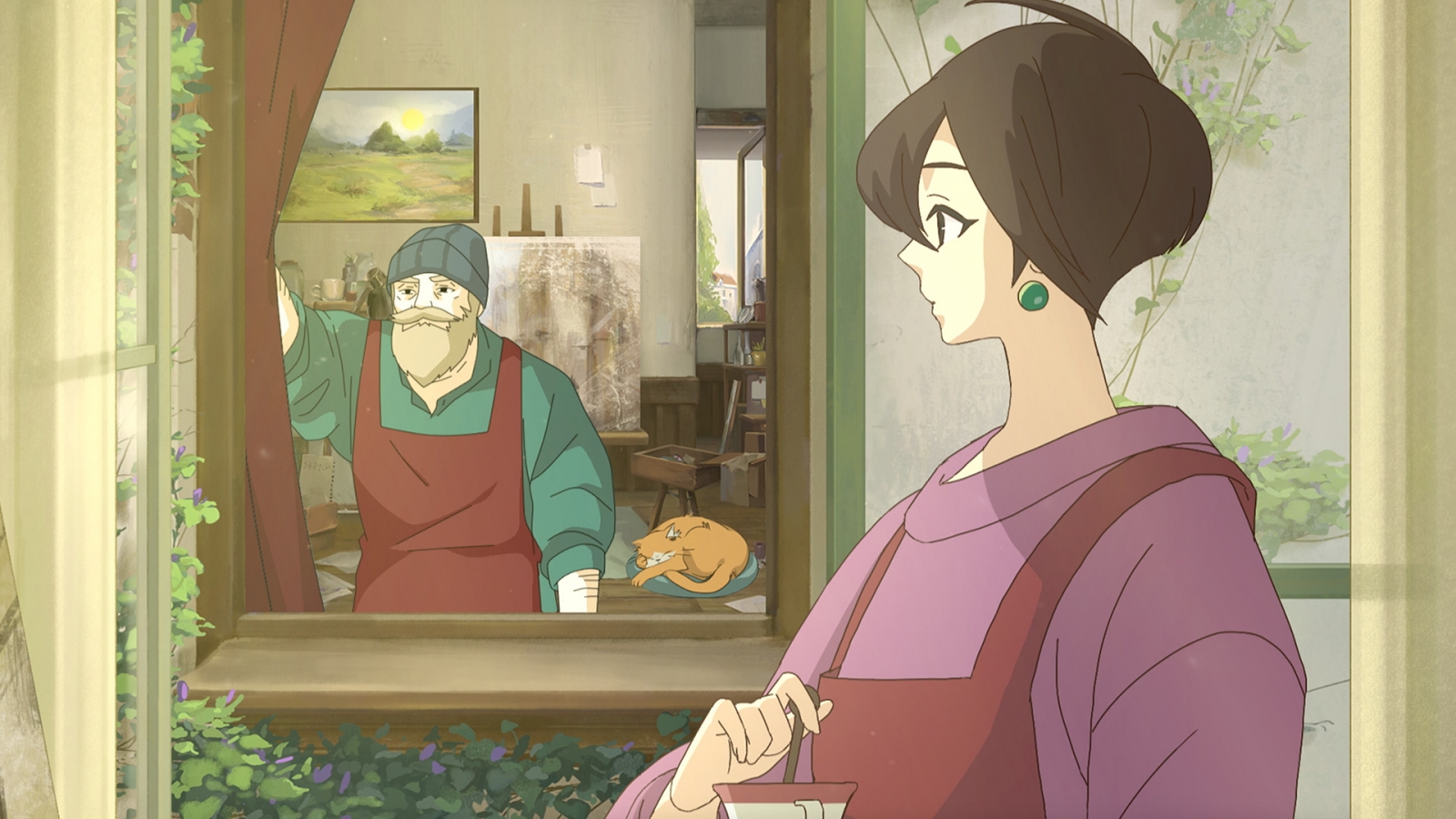 When I first saw the trailer for Behind The Frame: The Perfect Scenery back at E3, I was both intrigued and bewitched by its showcase of Ghibli-esque visuals, the soft, peaceful soundtrack, and what looked like an interesting blend of both point and click and puzzle gameplay. I am pleased to say I enjoyed my brief time with this game, even if some aspects of the core gameplay left quite a bit to be desired. Let’s take a look!

In Behind The Frame, you take on the role of an artist who is preparing her final painting for her submission to an art exhibition. Like all of us, she is prone to procrastination, but as her paintings start to take shape it becomes quickly apparent that there is more to meet the eye in this tale. As the game is extremely short (you will easily polish it off in less than 2 hours), I don’t want to get into any specifics, but the story deals with themes such as love, art, death, memory, grief and there are some genuinely touching moments. Add in a spot of laughter and even a touch of the uncanny and there’s definitely enough to keep you engaged throughout. Oh, and there’s a cat! 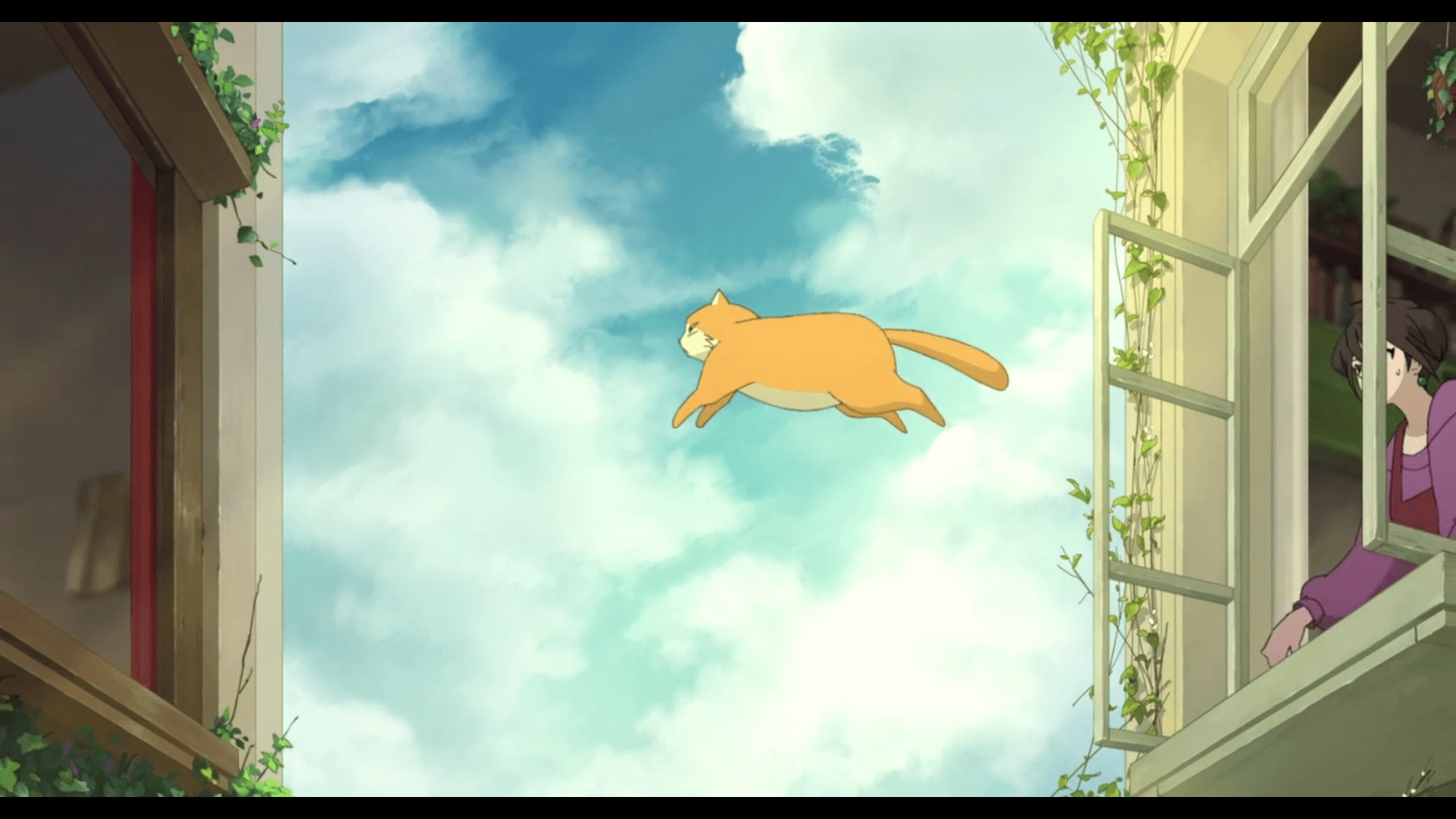 Most of the time, the story in Behind The Frame isn’t presented to us directly, but rather told fairly ambiguously through paintings as the player completes them, or through observations as you click on elements in the gameworld. I enjoy this form of storytelling because it demands slightly more attention, and due to the game’s length it doesn’t become cumbersome. It also adds a nice bit of replayability as there will undoubtedly be things you’ll only notice the second, or maybe even a third time around.

The vast majority of your time in Behind The Frame will be spent painting, sketching, solving light puzzles, and interacting with the gameworld to give you hints about the story or clues for certain puzzles. There’s no walking around in Behind The Frame, it’s very much a point and click that allows you to click and drag the mouse to rotate 360degrees to look around. Most of the game is spent in the protagonist’s bedroom, although the bedroom does change slightly each chapter. While it would have been nice to explore more varied environments (there are a few more, but not many), having most of the events unfold within one room does make sense in the context of the story. Thankfully, the bedroom is packed with interesting stuff to interact with so never actually got bored with it. 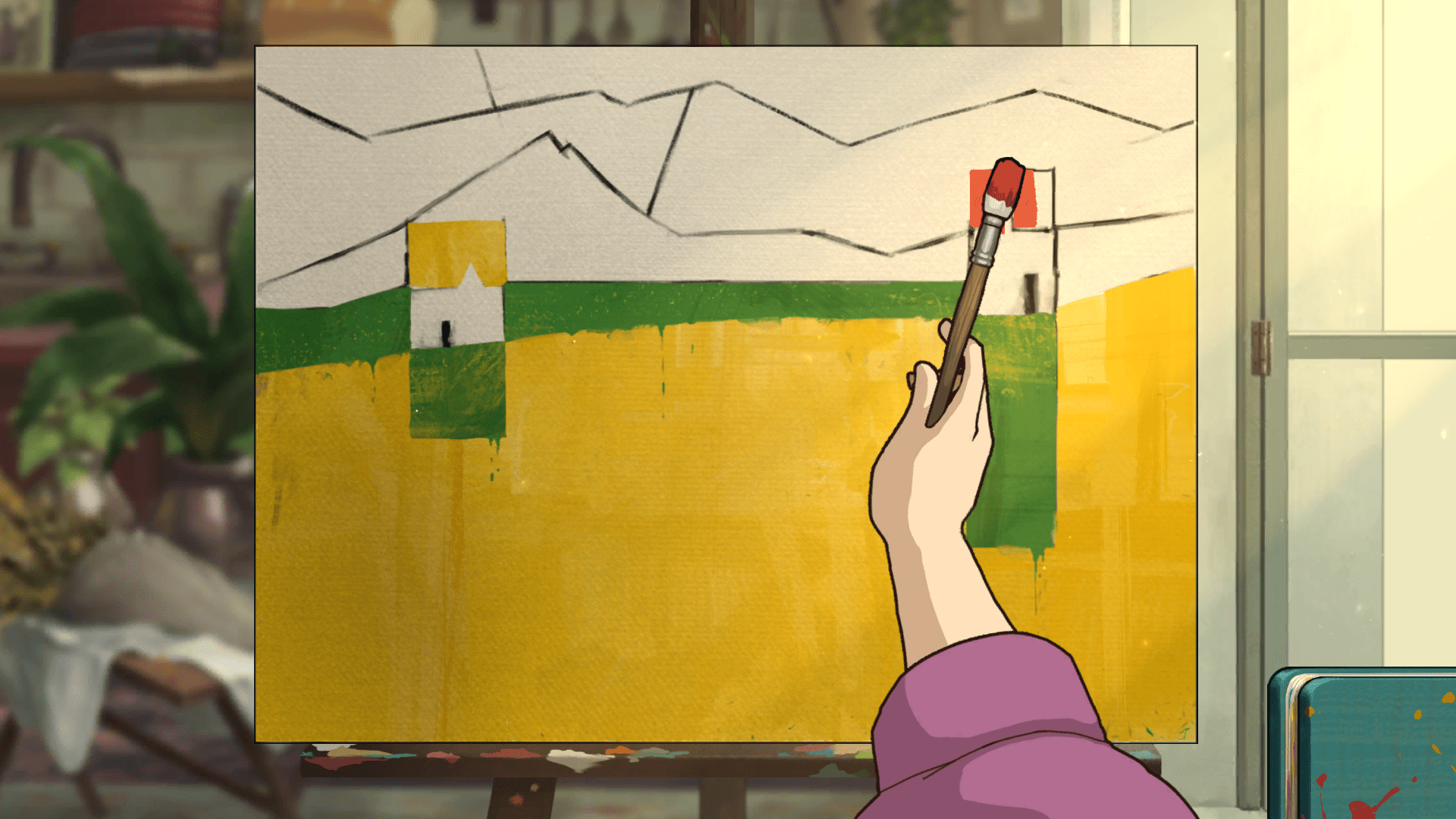 You begin the game with just one color of paint, the other ones being mysteriously absent. Of course, you’ll require more than the color yellow to finish off your masterpiece, so it’s up to you to scour the bedroom for different colors. Luckily there are a lot of unfinished paintings around the room, and each time you finish one you’ll be treated to a reward that is hidden – as the name suggests – behind the frame. This can be a color that will help you finish your masterpiece or other paintings around the room, or it might be a photograph, scrapbook ripping, or note that gives you more insight into what’s going on, or offers clues that will help you finish paintings or solve puzzles. In this sense, the game feels very rewarding — as with each painting you complete you’ll be treated to something that will progress you in a meaningful way. The mystery of what’s behind the frame of each painting also adds another layer of enjoyment because you never know what you’re going to get.

There isn’t a whole lot of thought involved in completing a painting, it’s the simple case of choosing the correct color for each section and filling it in with your mouse. You don’t even have to worry about going over the lines as the game will not apply the paint if you go out of the designated section for that color. For me, I would have preferred the game requiring a little more dexterity – perhaps in the form of making you start over if you go over the line too much – as it ends up being quite mindless. On the other hand, not being able to fail does add a cathartic element to each painting you complete — and this fits nicely with the tone of the game. Sketching has even less complexity; it’s literally the case of dragging your mouse over an empty space in the sketchbook as the drawing is automatically added to the page. Again, I personally would have preferred for it to be a little bit more involved.

As alluded to previously, there are also some light puzzles for you to complete. This could be as simple as making a coffee or cooking breakfast, with some more advanced ones including using symbols around the bedroom to crack the pin to get into your computer. Some of these require a little more thought, but nothing will leave you stumped for too long. 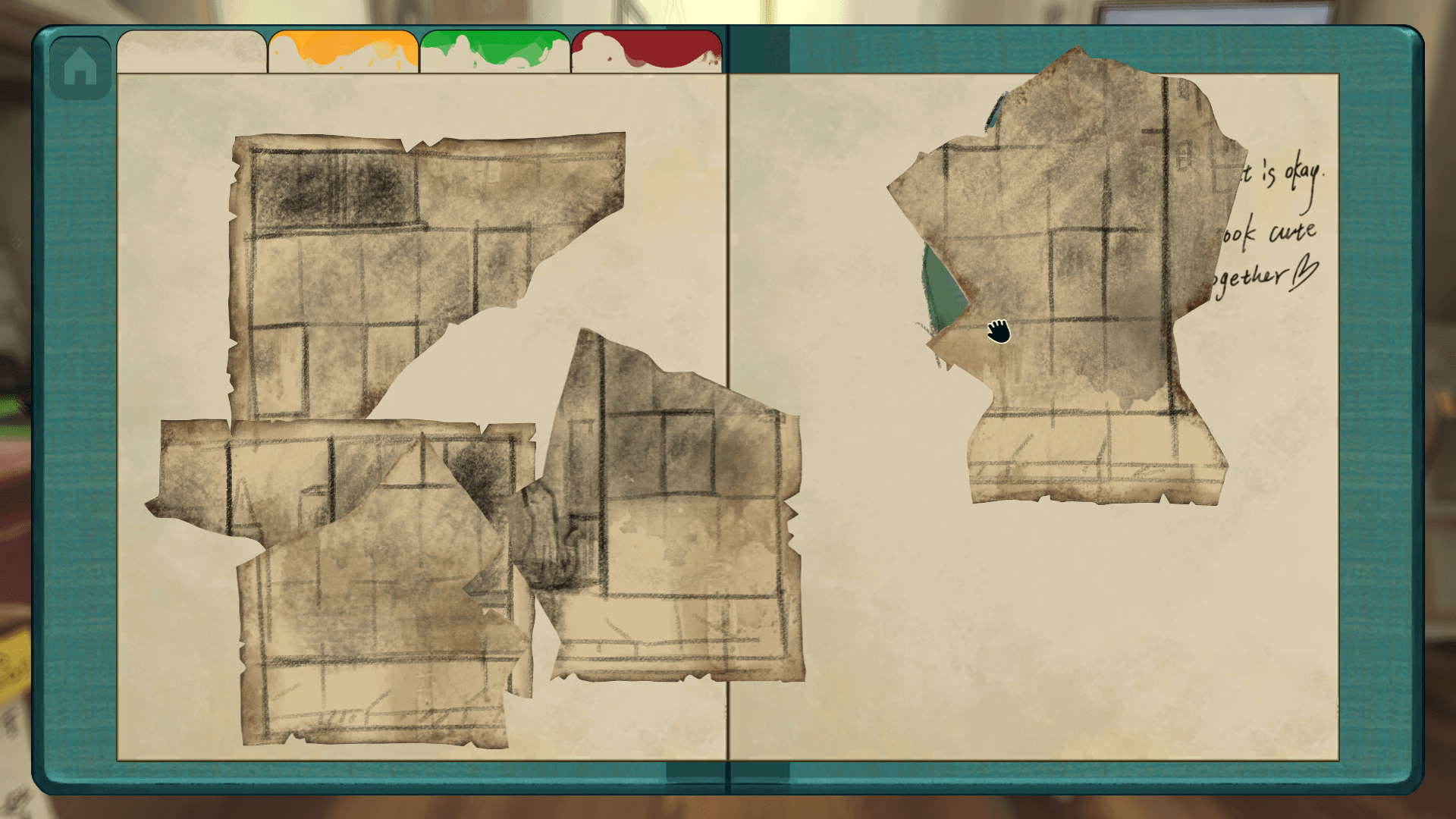 Perhaps the strongest aspect of this game are the visuals; they’re genuinely a work of art (pun definitely intended). The paintings themselves burst with colour, and it’s a joy to see an unfinished canvas come to life before your eyes. There are plenty of other assets around the gameworld that are no less lovingly crafted, and everywhere you look pops with colour. Comparisons to the Studio Ghibli movies are accurate in the designs of the characters, animals, and general aesthetics of the environments. There’s also a few cutscenes in the game that are basic but nonetheless competently put together, although they did seem to be running at a lower resolution than the rest of the game which was a bit of a shame.

If you’re looking for a brief, relaxing, and touching experience that won’t demand too much of you, then I do recommend checking out Behind The Frame: The Perfect Scenery. There’s a nice story to be found inside, and while the gameplay won’t challenge you, it might be exactly what you need to wind down after a long day.

Behind The Frame: The Perfect Scenery offers a beautiful blend of Ghibli-inspired visuals and light puzzling that uses a unique storytelling technique to deliver a touching tale of love. While the gameplay is a bit basic, this one is perfect for a rainy afternoon inside or a way to wind down after a long day at work.

Kristian (or Kris for short) is a copywriter by day, button presser by night. Based in the UK, Kris loves any game that allows him to swing a sword, fire an arrow, or sling a ball of fire, but ultimately he's not too fussy. On the rare occasion Kris isn't writing or gaming, you'll probably find him in the bath with a good book.
Related Articles: Behind the Frame, Indies
Share
Tweet
Share
Submit