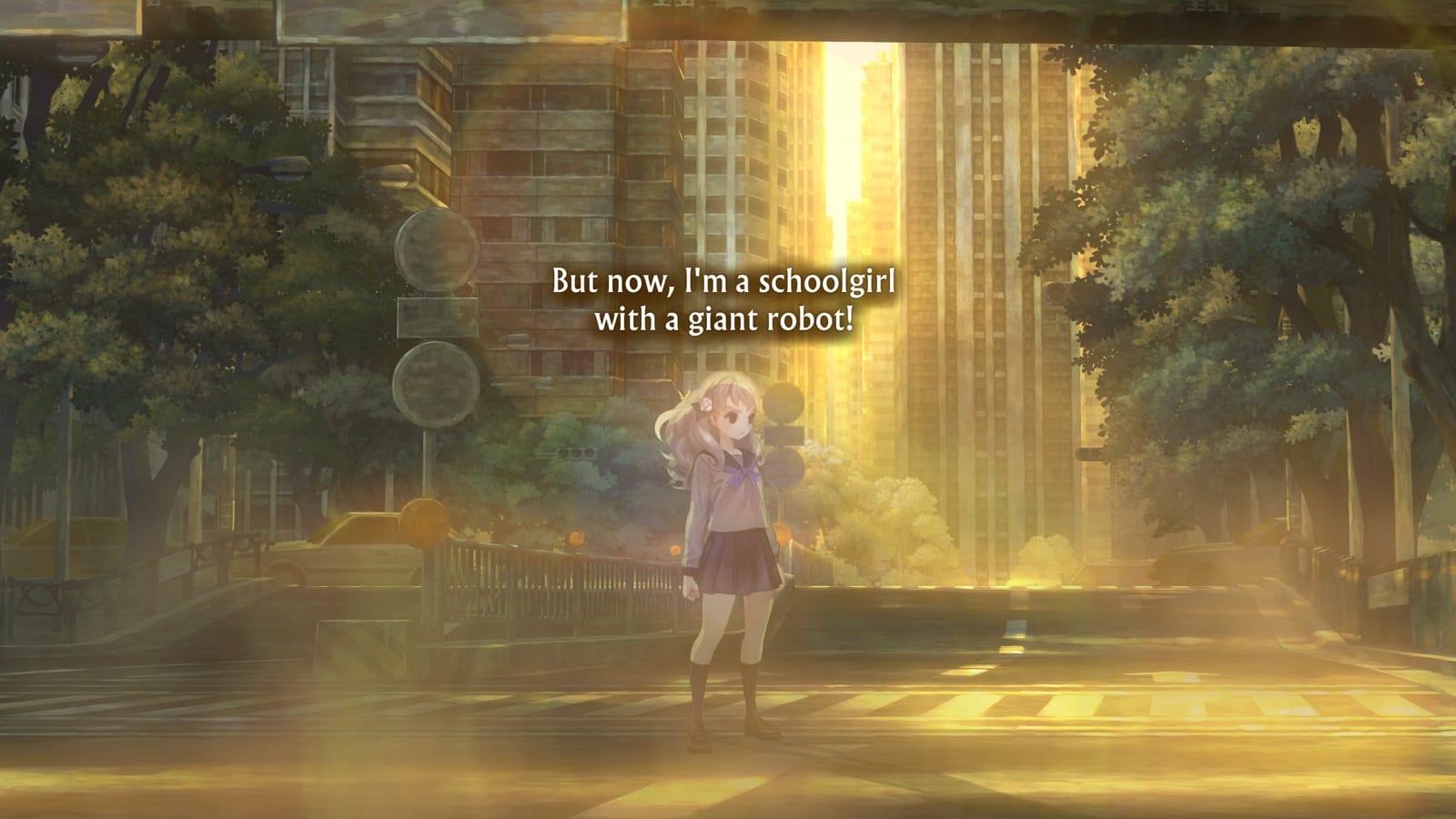 There are very few games that actually take advantage of the interactivity of the medium – 13 Sentinels: Aegis Rim is one of those games. It’s divided into three distinct modes: Reminisce, where you play as one of the 13 protagonists; Destruction, which takes place at the end of the story as the protagonists band together to defend their city from an alien invasion; and finally Analysis, where you can view everything revealed in the plot thus far. It’s up to you to put all the pieces together from the three modes to understand what’s going on.

In Reminisce, you’ll choose from one of the protagonists, who are all highschool students in a Japanese city, and play through a bit of their story in an adventure game style. I don’t want to go too deep into what exactly you do in this mode, so as not to spoil the excellent plot, but essentially you’ll walk around an environment, interact with people and objects, and use/think about ideas in your character’s “Thought Cloud,” which is basically your inventory. Most characters’ stories follow a similar structure of starting in one place every single time, for example Iori Fuyusaka will always start in the middle of the city deciding what to do with her friends. From there, you need to do different things, like going to get the delicious looking crepes instead of soft serve, to access different parts of the flow chart and progress the story. I found that the most interesting and fun characters to play as are Nenji Ogata, who’s stuck in a time loop a few minutes before aliens invade, Natsuno Minami, a sci-fi nerd helping a cute little robot find something across time and space, and Juro Kurabe, arguably the main character, who’s a Kaiju film buff investigating his strange dreams. Every story throws Earth shattering developments at you constantly, but these three stuck out to me because they changed up the context of the gameplay just enough to feel fresh and exciting.

Having to repeat some actions multiple times and the epic novel-like amount of text you need to read (the english dub was not ready in time for this review) can make it a bit tedious, but every single character is well written and interesting, even if they’re not what I’d call likeable. I think that speaks to just how good this story is, that I’m still chomping at the bit to find out what happens next to characters I don’t even like. You’ll need to complete each storyline to finish the game, since a character’s story will occasionally be locked behind certain events in another’s or progression in another mode. This links all the modes together very well, but gives the game some wonky pacing. Maybe that’s because I played Destruction on casual difficulty, but the majority of the game’s 35 to 40 hour runtime was spent reading in Reminisce mode. While the Japanese voice acting is excellent, my understanding of the language is less than fluent so by the time I’d finished I’d felt like I had read the Lord of the Rings trilogy three times over. I love reading, but there is A LOT of text in this game, and it’s all voiced. I hope the English dub can live up to the quality of the Japanese, but at the very least it should make this part of the game a little more engaging than it already is.

Destruction mode takes place after the events of Reminisce and features real-time strategy gameplay as you guide the protagonists, now piloting their titular Sentinels, to defend the city from aliens. Each area contains about 10 stages, where the goal is usually to defend a point until time runs out or all the Kaiju are defeated. While the characters’ giant robots are divided into four distinct classes, melee, all-rounder, flying, and ranged, they each have skills and abilities that make them unique. For example, Ryoko Shinonome has a passive ability where she becomes more effective when fighting by herself away from the other protagonists. Because of these traits, you may want to choose a certain character over another for some battles even if they’re of the same class. You can only bring six combatants into battle, but some levels have restrictions which will grant you bonuses if completed like bringing certain characters or only having four participants in battle. You can further increase your score by choosing not to recover between battles, which keeps characters’ HP, EP, and Brain Overload status consistent between fights. While you can easily recover HP and EP in the midst of battle, piloting a Sentinel too much takes its toll on a character, and if they reach Brain Overload they won’t be able to participate in battle for a while. 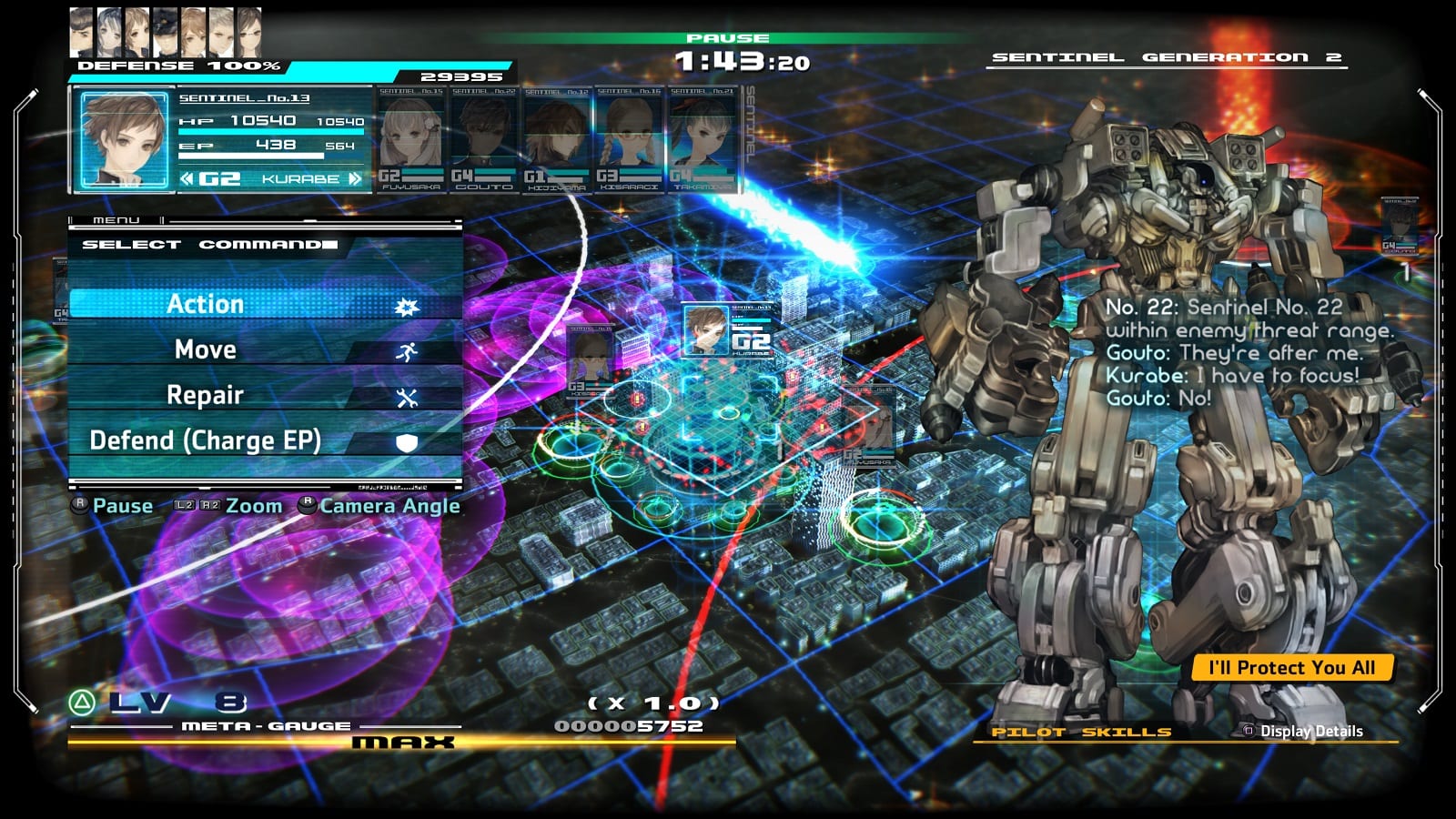 In battle, participants can attack, move, or defend to recover EP. While some attacks don’t cost anything, more powerful ones will consume EP. Taking an action will use up that character’s turn, and you’ll have to wait a short time before they can act again. The Kaiju will come at you gradually in waves, so it pays to be prepared by activating shields or placing down cannons to auto-fire on the enemy. Preparation may pay a little too much in fact. In most battles I had placed down so many sentry guns that some characters barely got a chance to attack anything. This trend lessened as I progressed through the game and I was playing on the easiest difficulty so your experience may differ, but sentries felt very overpowered. If a character’s HP runs out, they’ll have to disembark their sentinel, so they’ll move very slowly and die in a single hit which will cause a Game Over. Thanks to my sentries, this never happened and characters rarely took any damage at all. This is great if, like me, you’re bad at strategy games or just want to experience the story, but strategy buffs may want to play on a difficulty higher than normal to compensate.

Finishing a battle will grant you Mystery Points, which are used to unlock new information in Analysis mode. Some of these files are pretty useless, like “This person who looks like Chihiro Morimuria is, in fact, Chihiro Morimura,” but others can reveal important information you may have forgotten in the complex plot or some neat art. Vanillaware is known for their gorgeous 2D art, and Aegis Rim is no exception. This game is absolutely beautiful. Just look at some of these videos and screenshots; it speaks for itself. The lighting deserves special attention, especially the sunsets you’ll see throughout the game which somehow make everything more pretty than it already is. I do have a few problems with the visual style, however, and that’s Vanillaware’s tendency to objectify women. I didn’t have a problem with this in their previous title, Dragon’s Crown, as the men were similarly objectified, but seeing as the characters here are around 15 or 16 it’s just gross. In addition, every character has to swipe across a part of their body to summon their Sentinels and all the boys have to swipe their arms or heads while the girls have to swipe their butts or thighs. Furthermore, while the protagonists are all naked inside their giant robots, only the girls are positioned in such a way to show off their breasts or butts. Seriously, I can live with Ms. Morimura’s exaggerated proportions since she’s an adult, but these are children and no one wants to see that. Unfortunately, the 2D art goes out the window in Destruction mode as it’s presented from an overhead, isometric view with minimalistic depictions of all the combatants and the city. The screen can get far too busy in these segments with effects and enemies everywhere, and it’s a shame you don’t get to see the cool robots fight. 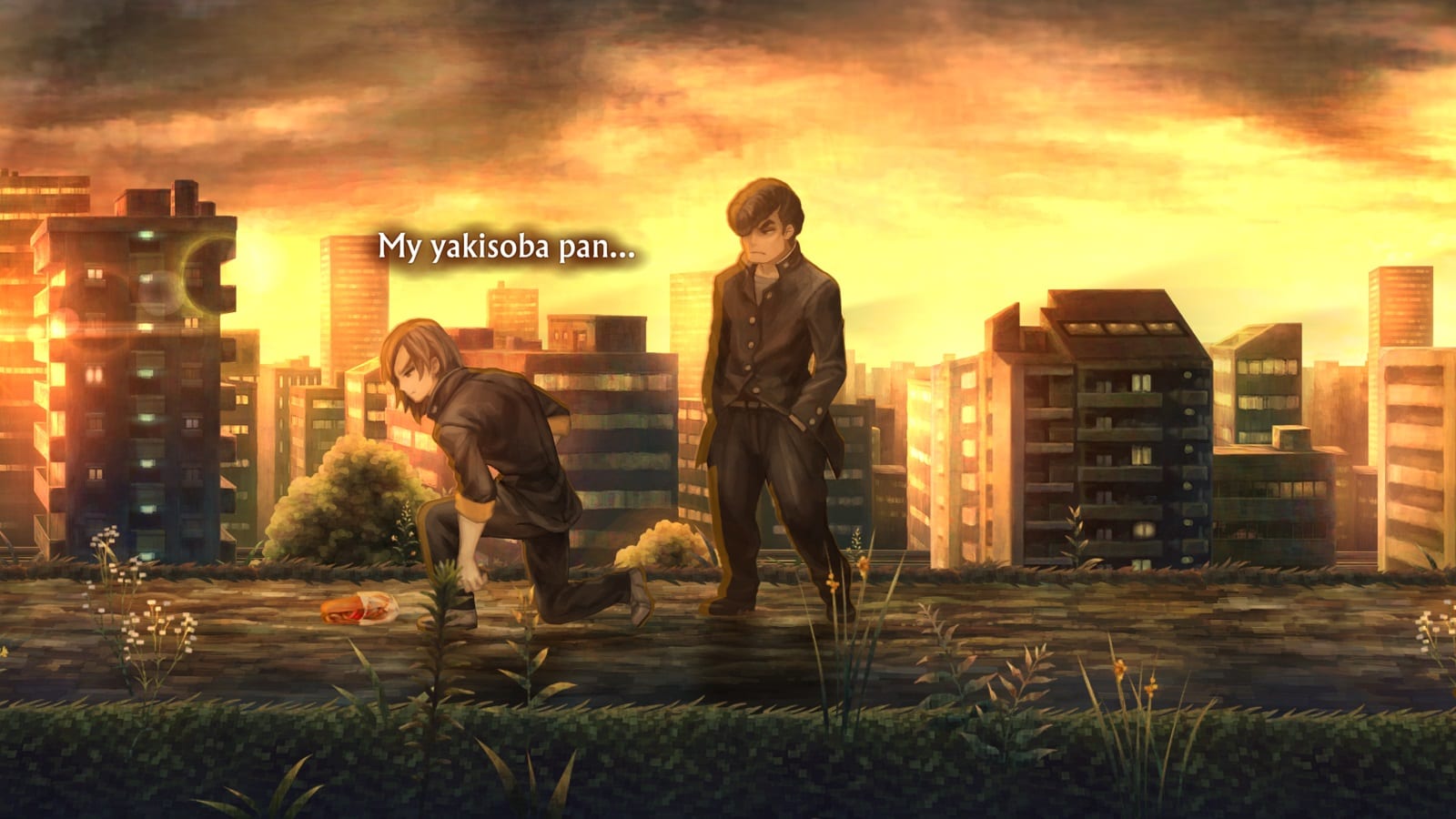 The story can go to some uncomfortable places, which is fine for the most part. I want art to challenge my perceptions and make me uncomfortable. Most of the story takes place in 1985, but two of the characters come from 1945 and are soldiers during World War II. Naturally, they’re shocked to find that Japan was on the losing side, and a problem arises with them wanting to take the Sentinels back in time to win the war. They talk about this fairly frequently, and no one challenges this view or even says that “hey, the Nazis were bad, we were on the wrong side.” They don’t really change their minds about this either, it just eventually goes away in the story. One of these character is also involved in a gay romance, which I felt fell fairly flat because by the end of the game their relationship doesn’t evolve beyond “I’m not attracted to you, b-baka” whereas every other romance does. Same with the gender fluid character- they change up their presentation occasionally but it’s never explored beyond the fact that other characters find it kinda weird but are generally cool with it. I appreciate the inclusion, but this feels like a bit of a cop-out. The rest of the story is phenomenal and fully fleshed out, which makes these problems stand out even more.

13 Sentinels: Aegis Rim is a very unique experience, even in the realm of video games. It’s gameplay systems gel well together and the non-linear storytelling could only work in this medium. While some plot points aren’t as well explored as others and it uncomfortably sexualizes high school students, it’s still a game you absolutely need to play if you’re a fan of science fiction or enjoy video game storytelling.

David is the kind of person to wear his heart on his sleeve. He can find positives in anything, like this is a person who loved Star Fox Zero to death. You’ll see him playing all kinds of games: AAAs, Indies, game jam games, games of all genres, and writing about them! Here. On this website. When not writing or playing games, you can find David making music, games, or enjoying a good book. David’s favorite games include NieR: Automata, Mother 3, and Gravity Rush.
Related Articles: 13 Sentinels: Aegis Rim
Share
Tweet
Share
Submit