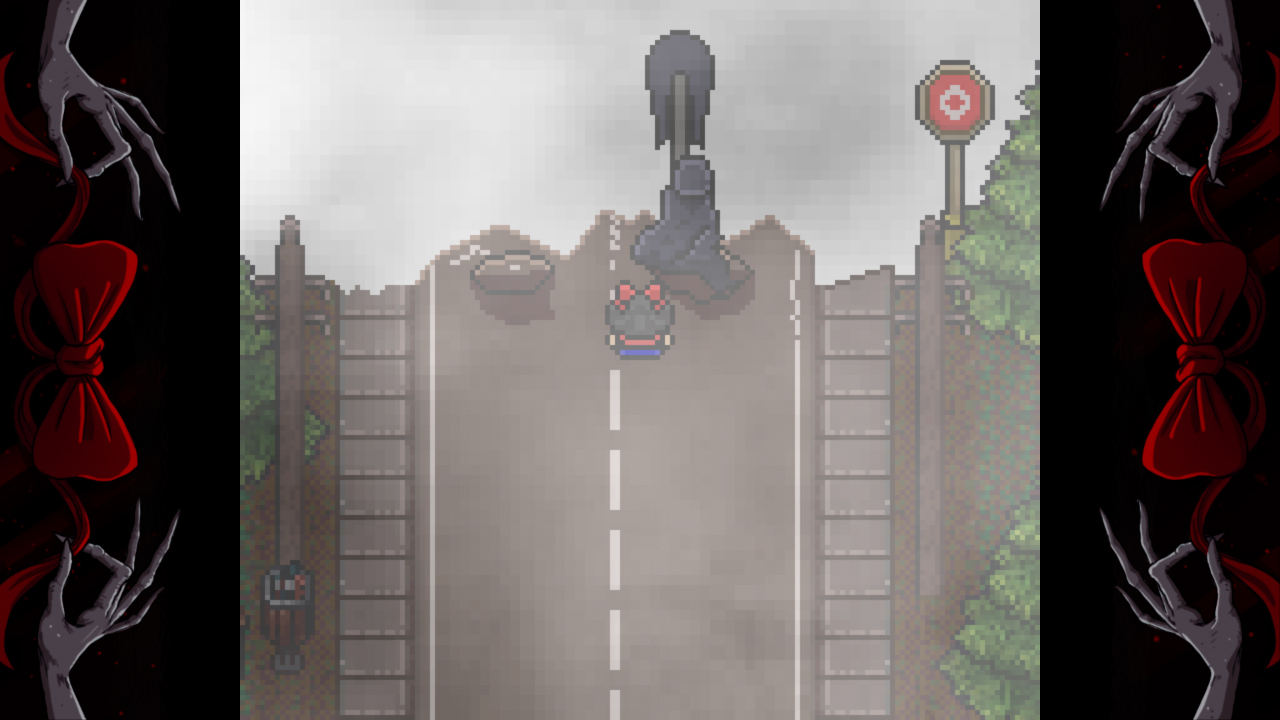 Few games can achieve an eerie feeling and send chills up your spine within the first 5 minutes. I felt that with Red Bow, the newest title by Stranga Games released on the 14th of January 2020, which is a short, creepy game designed to emulate the aesthetic of the Gameboy era. You might be familiar with this single dev team from other games including Mini Thief or My Big Sister. As with those titles, Stranga Games has once again utilised the pixel art style, befitting for a relic of said era.

Red Bow follows a rather interesting and creepy story of a little girl named Roh. The game begins soon after Roh wakes up to take on her day, but the moment she steps out her door the world is not the same as she left it. Instead, her house is gone, and she’s standing in the middle of an unfamiliar road. Roh’s only goal is to get home, and the ending of each chapter will present to you a limited number of options to decide how it should play out. Though, be careful what you choose, as your choices dictate the ending to Roh’s story. 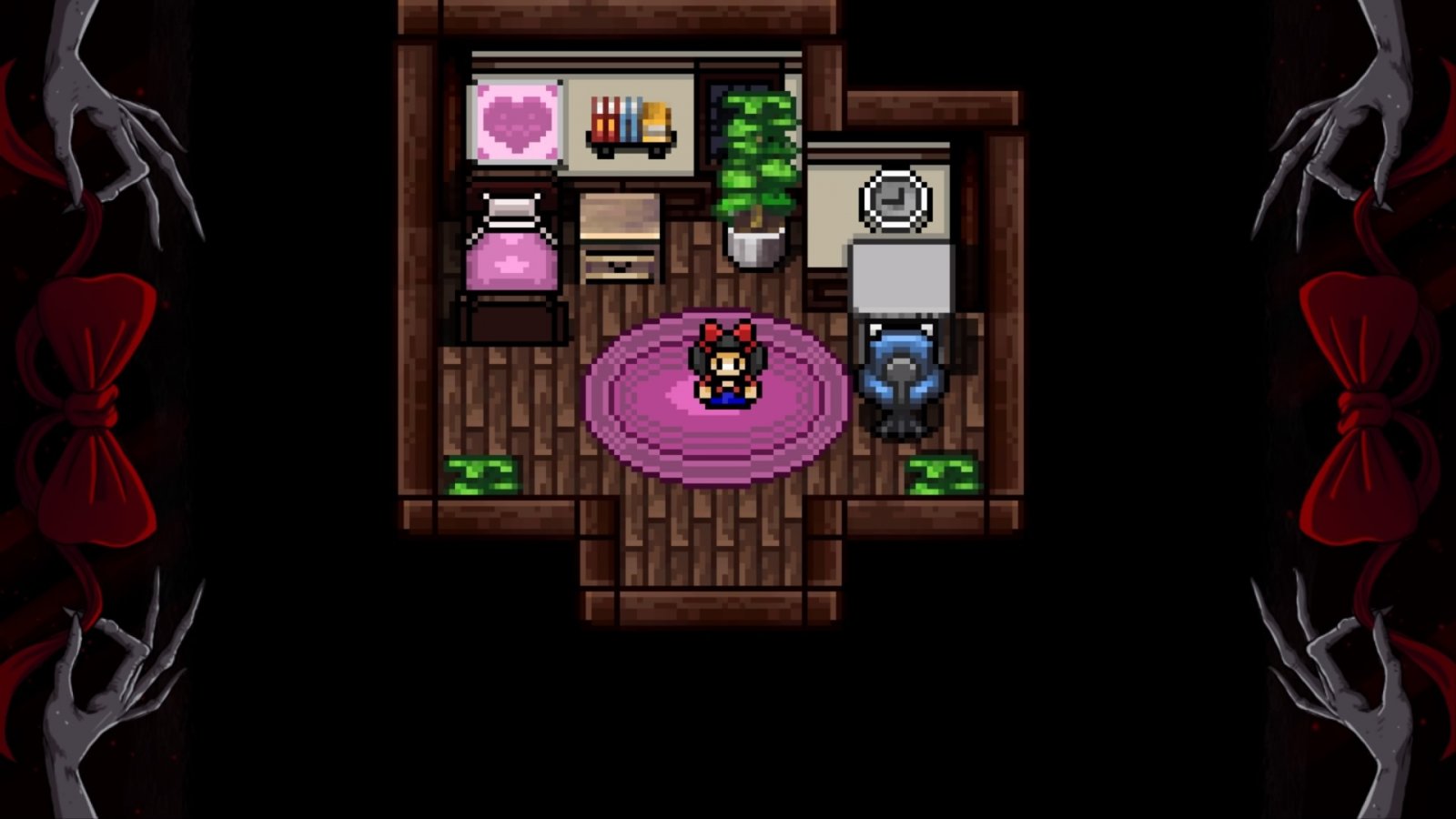 At the beginning of each chapter, you’ll wake up in Roh’s bedroom

I will say right off the bat I did like the story; albeit it’s not amazing. The first of the three chapters are set in the place between life and death: limbo. This place is only meant to be a stepping stone for most, but there’s a few who may find themselves stuck here if their death wasn’t fated. Rather if they, say, took their own life, they’d be here for eternity. Your choices at the end of each chapter dictate the ending of the game. For example, at the end of chapter three, you’re given the option to either help free an imprisoned soul on board the ship you’re on, or ignore them and help the captain instead (he’ll send you home if you get him a bottle of alcohol). Depending on your choice, and as much as I’m trying to avoid spoilers here (so, spoiler alert), if you make selfish choices and don’t help these lost souls then you’ll receive the bad ending. 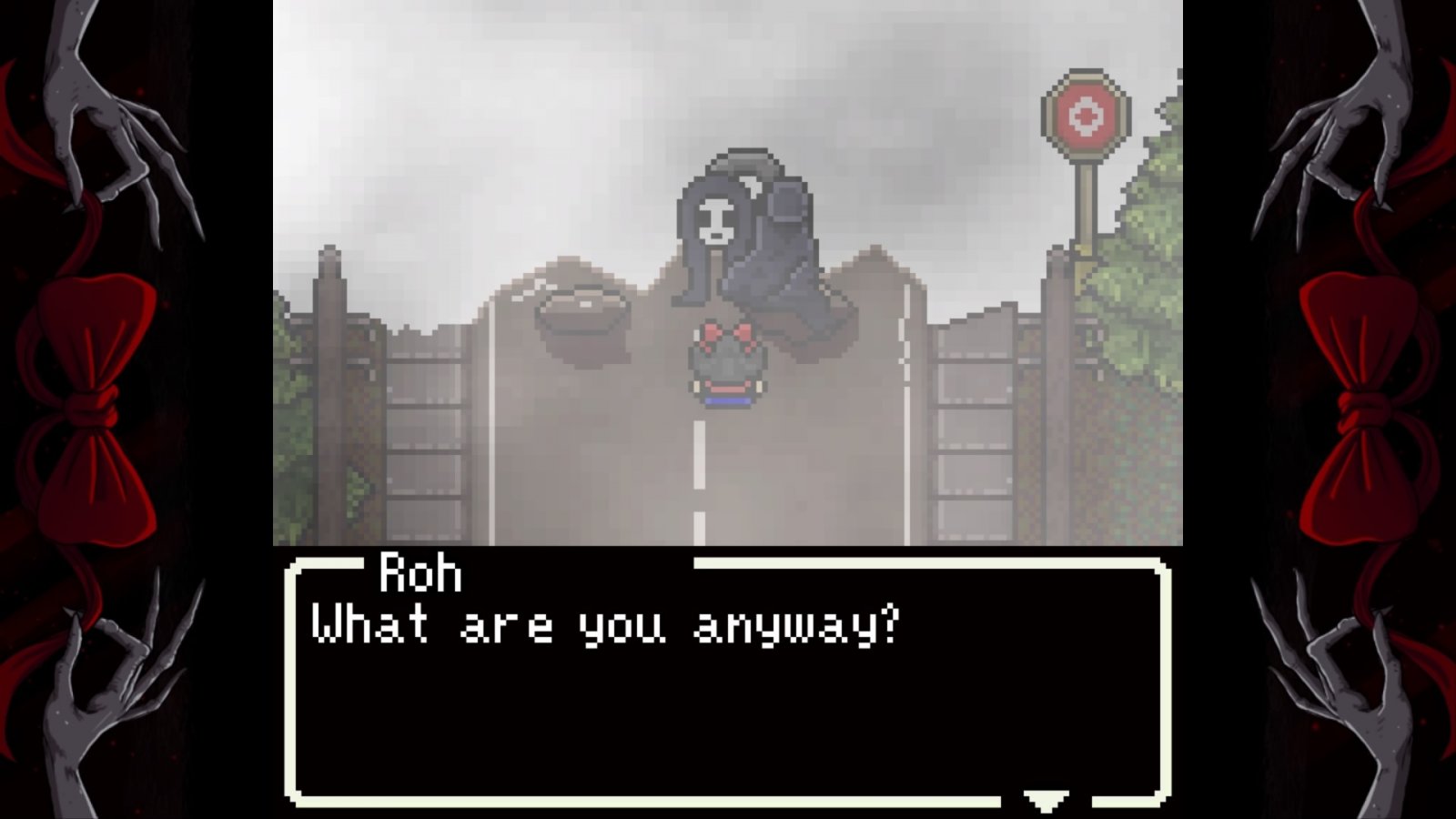 Pretty damn creepy guy to meet right off the bat

Red Bow comes with a lot of baggage. There are barely any interactable elements, even though the game markets itself on Steam as “RPG top-down style which consists of finding items, secrets and solving puzzles to progress the story”. Also, what it means by “RPG top-down style” is literally just the classic birds-eye-view style that you’ll see incorporated into classic Gameboy games. You’ll find items and solve puzzles, sure, but they’re so linear it’s ridiculous. Again, there’s not a lot to interact with, so those puzzles more or less feel like just beats in the story. The gameplay is overall pretty stale since you won’t have much opportunity to explore since the levels are so small and you’ll get direction from NPCs on what you need to be doing. There’s maybe a handful of secrets as well since typically they’re designed to be one of the various endings of each chapter. And you’ll know when you’ve found a secret because you’ll get an achievement for it. You won’t need much time with this one either; even though it may market itself as a 1-2 hour game, it takes roughly 20 minutes to finish. Now this one might be personal preference, but there are way too many achievements for this title. There are 38 achievements, yes 38 achievements in a 20-minute game. And you get them for stuff like interacting with a sink or simply just progressing through the story. It’s silly and unnecessary because there’s little to no reward when you receive them. If anything, I found more enjoyment guessing whether or not interacting with an object would grant me an achievement, rather than the satisfaction of receiving it. 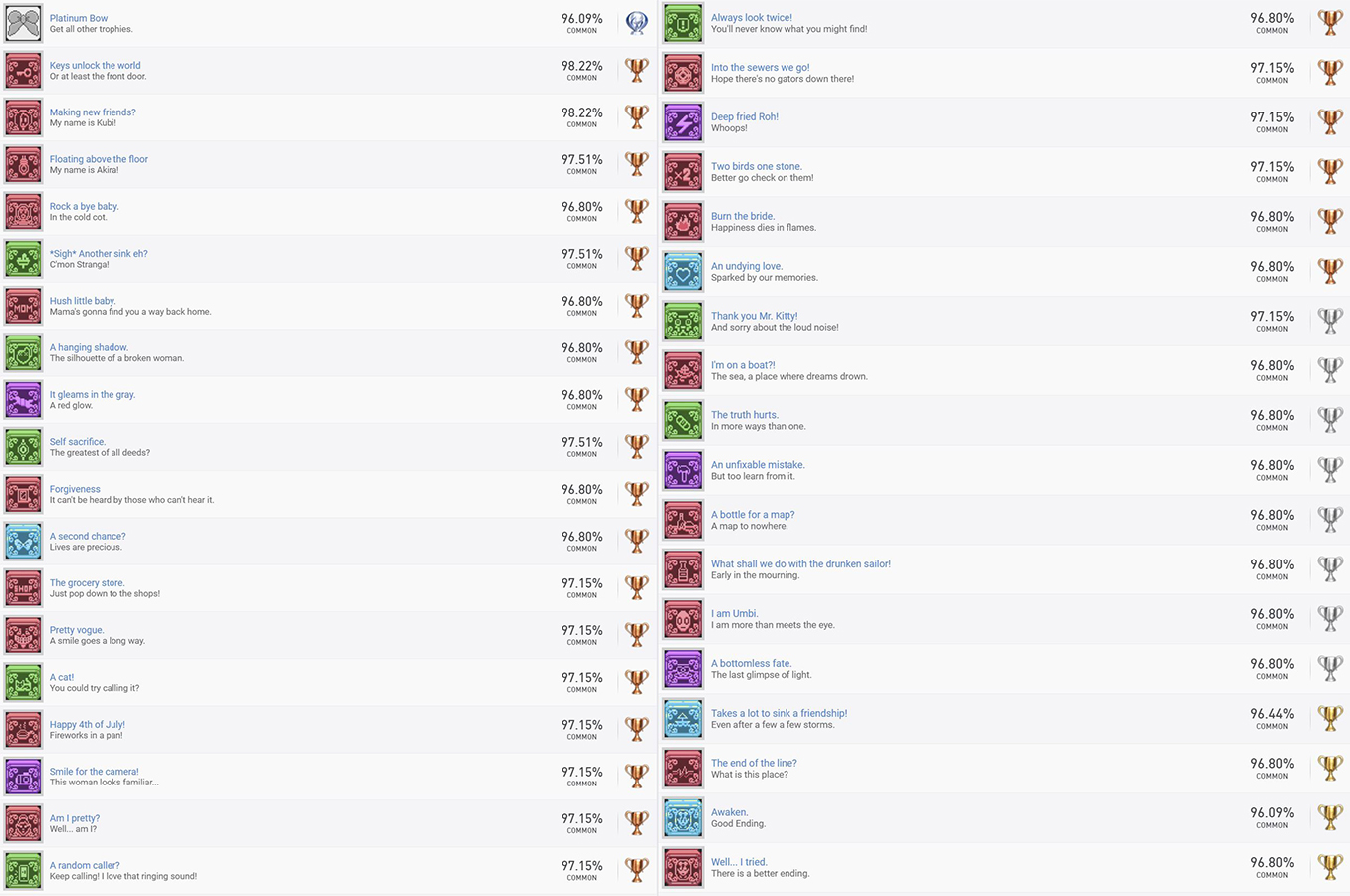 You’d think after 15 the developer would say “yeah, I think that’s plenty”

There are also plenty of technical issues that could easily be fixed and make the experience more enjoyable. There are a lot of invisible walls; sometimes they make sense, most of the time they’re placed weirdly. For example, if you go behind a fence you won’t stand directly behind it but about half a metre from it instead. That might not sound that bad at first, but when the game is as small as Red Bow that gives you a very small path that you’re able to explore. Entrances have invisible pixel-sized barriers that prevent the player from immediately turning, so you’ve got to move up a couple of spaces before you can walk along the already limited path. Interacting with objects also causes issues,, as attempting to will artificially move Roh to a point where she can do so. This presents some weird moments where Roh will do a spin on the spot, or run to an awkward viewing angle, just to interact with an object. That one is a small grievance, but it was strange to see it present when games like Undertale, or VirtuaVerse, or effectively any other pixel art title, let alone top-down viewing game, don’t have such technical flaws.

The dialogue boxes and the dialogue itself was very poor. For the former, it was weird to read Roh’s thoughts as if she was speaking them out loud. Typically it should be read in a narrator’s voice, or set in italics, so it was hard to distinguish when she was thinking or speaking. When you first meet a new character that hasn’t introduced their name they’ll display “???” where the name should be. But for the majority of the characters you meet after, even though Roh will have never seen them in her life, she’ll already know their name and then a few lines of text in they’ll finally reveal their name. Now, for the dialogue itself. Overall, it was written very poorly, and I felt like most of it was packed with filler. For example, in the first chapter, one of the characters was talking about why they were stuck in this weird limbo between life and death, and said: “I’m looking for my daughter”. Roh then responds “you’re looking for your daughter!?”. Stuff like that was so common; why does Roh have to constantly confirm what she heard? I felt that the developer only put stuff like that in so they could ensure that the player never missed a plot point. 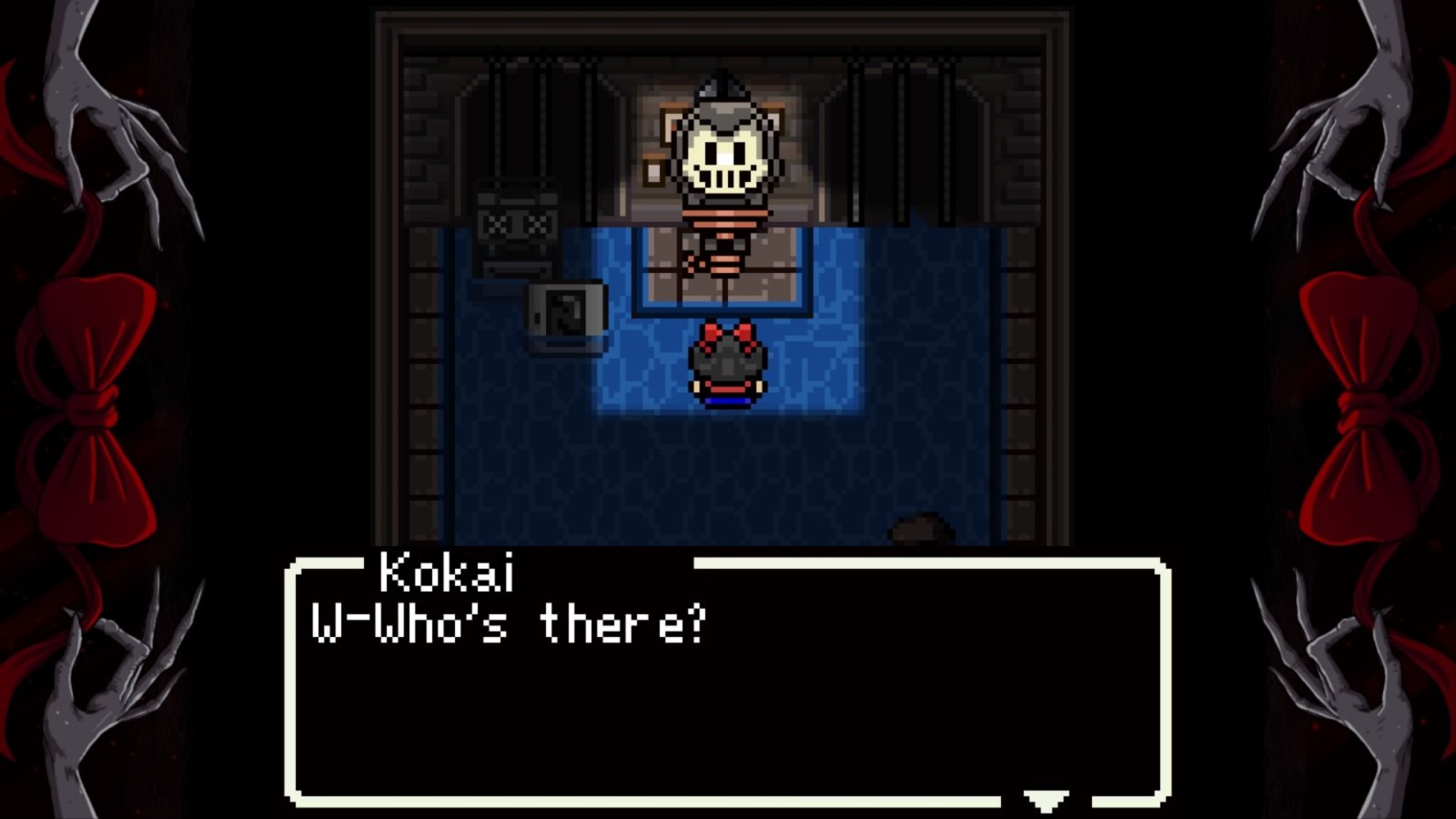 Dude, I’m right in front of you in the light, what do you mean?

Overall, this game felt like it was made for a 24-hour game jam, where the sole developer of Stranga Games didn’t have time to playtest their game. While the story was interesting, the rest of the experience is well below par. Not only that, but there’s also just no content in this one, even though there are nearly 40 achievements. This is definitely one that needs to go back to the drawing board.

Red Bow has a lot of potential to be great, but it’s simply not. There are a lot of strange technical issues and downright poor creative decisions that make up for a dismal experience. While the story is effectively the only thing holding this title together, it’s not nearly enough to warrant a recommendation.

With a deep interest in writing, Ben followed that into a Journalism degree. As an avid lover for gaming, he is constantly expanding his library with console, PC, and VR games. He's obsessed with stealth games and loves hunting down the smallest of details inserted by devs.
Related Articles: Red Bow
Share
Tweet
Share
Submit