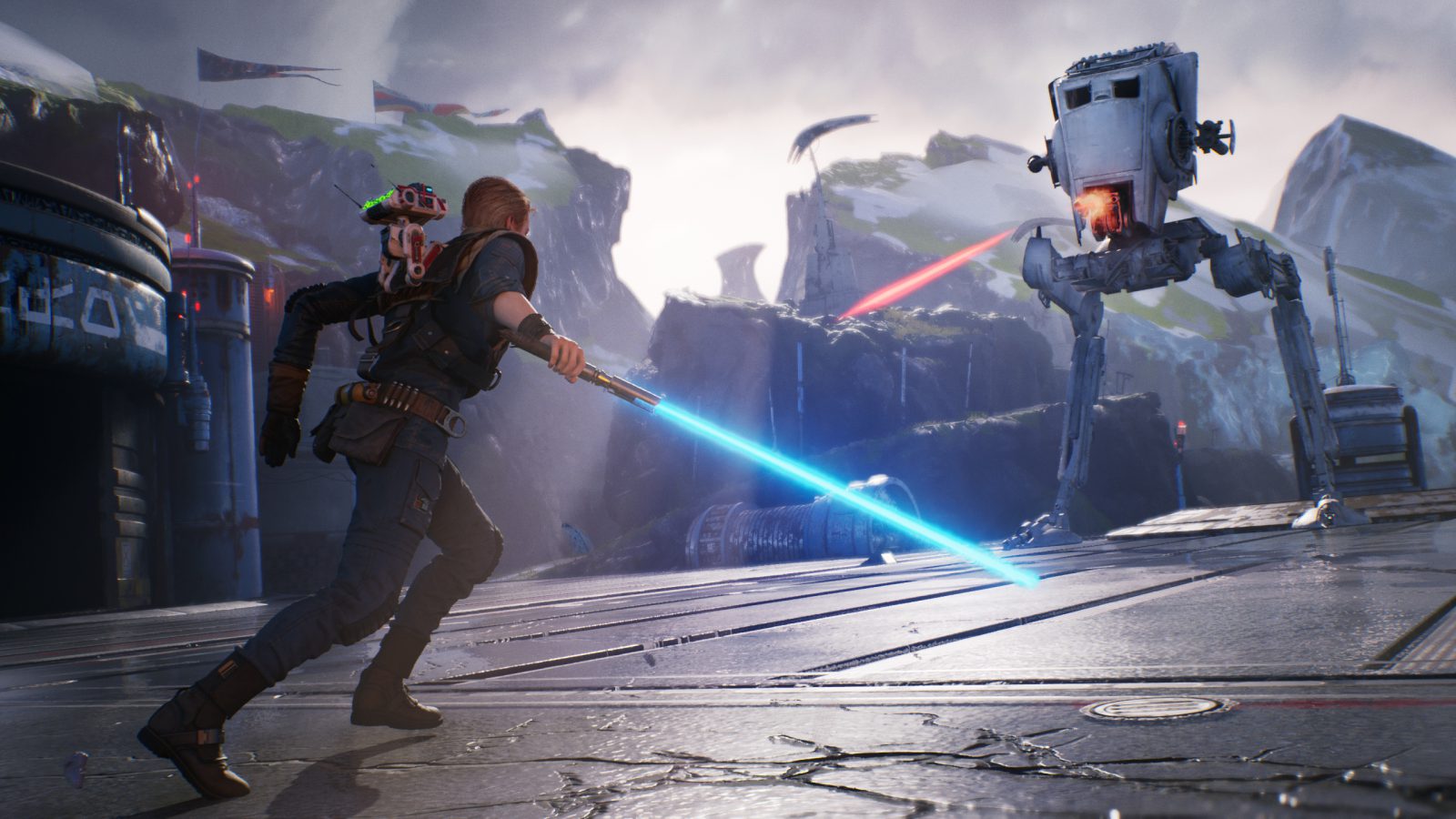 After EA’s live stream of the official gameplay demo, we were treated to a media-only exclusive look at Star Wars Jedi: Fallen Order.

Our demo started before the footage in the gameplay reveal. It opened on protagonist Cal, swimming in a swamp on Kashyyyk in pursuit of an imposing AT-AT that was bearing down upon the rebel forces. Tie fighters screeched overhead, exchanging fire with unseen rebel ships, as you inched closer and closer to the unsuspecting AT-AT. Thick, marshy vines draped from the quadrupedal armored transport, which proved to be effective handholds for our young Jedi. Cal climbed the AT-AT in a short Shadow of the Colossus style section, dodging friendly blaster fire, before slipping into a turret hatch. Cal clambered over a stowed speeder bike, before sneaking upon a small group of nattering Scout Troopers. 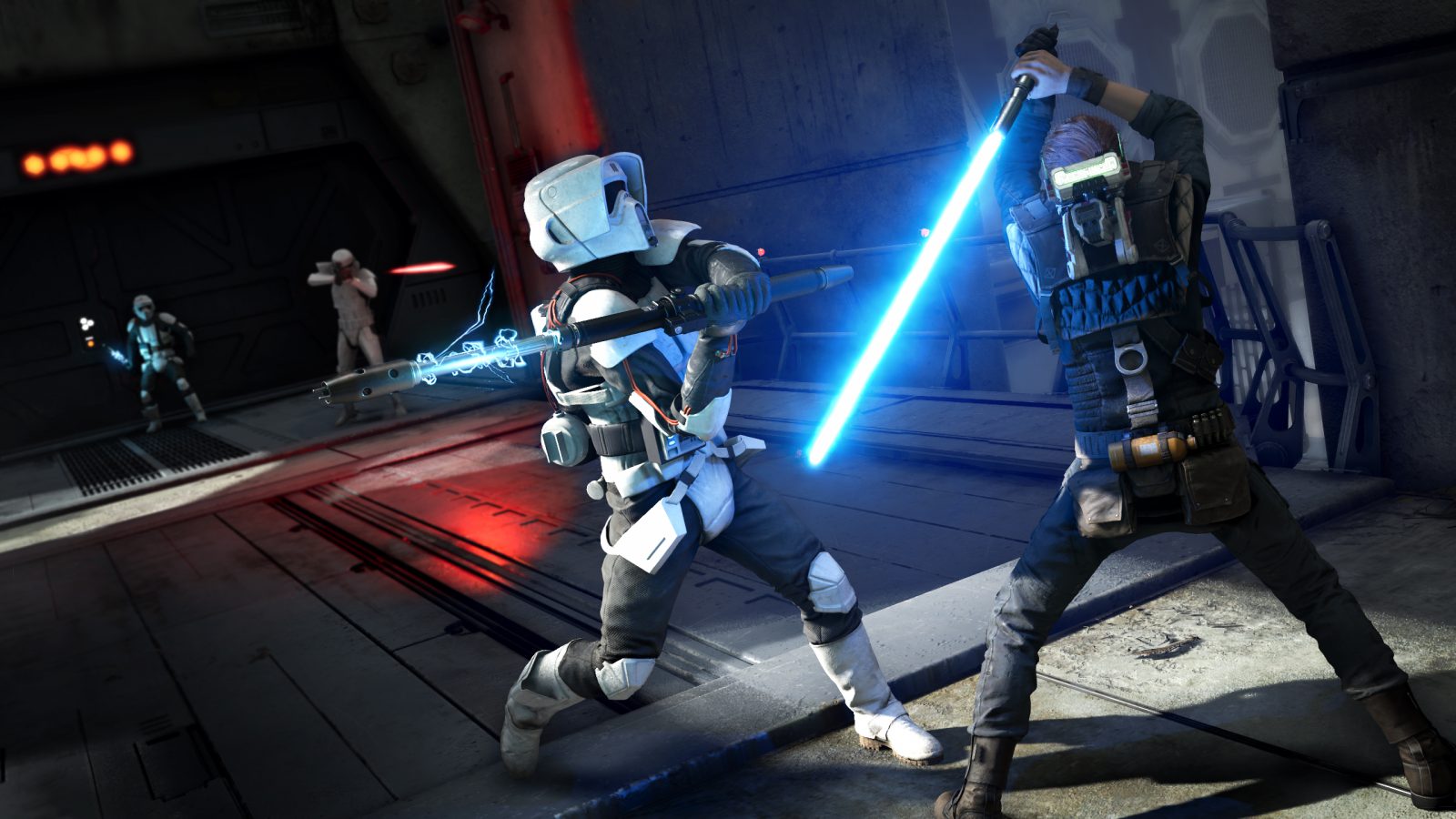 Here, we were treated to our first taste of combat. It was similar to the combat seen in the publicly released footage, a mix of lightsaber combat and clever force power usage, but the stun batons wielded by the Scout Troopers and the close quarters made the encounter a little more tense and engaging. After, Cal dispatches the pilots of the AT-AT and assumes control, blasting enemy walkers on the way to a small starport, where he reinforces rebel troops with overwhelming firepower.

The turret section ends as Cal trades fire with an Imperial shuttle attempting to flee the starport. Shot down, the shuttle plummets into the commandeered AT-AT with a satisfying crash. A cutscene follows where a rebel craft piloted by Cal’s associates lands on the newly conquered starport. Saw Gerrera chides Cal for the loss of the AT-AT and expresses disbelief at a still-surviving Jedi. 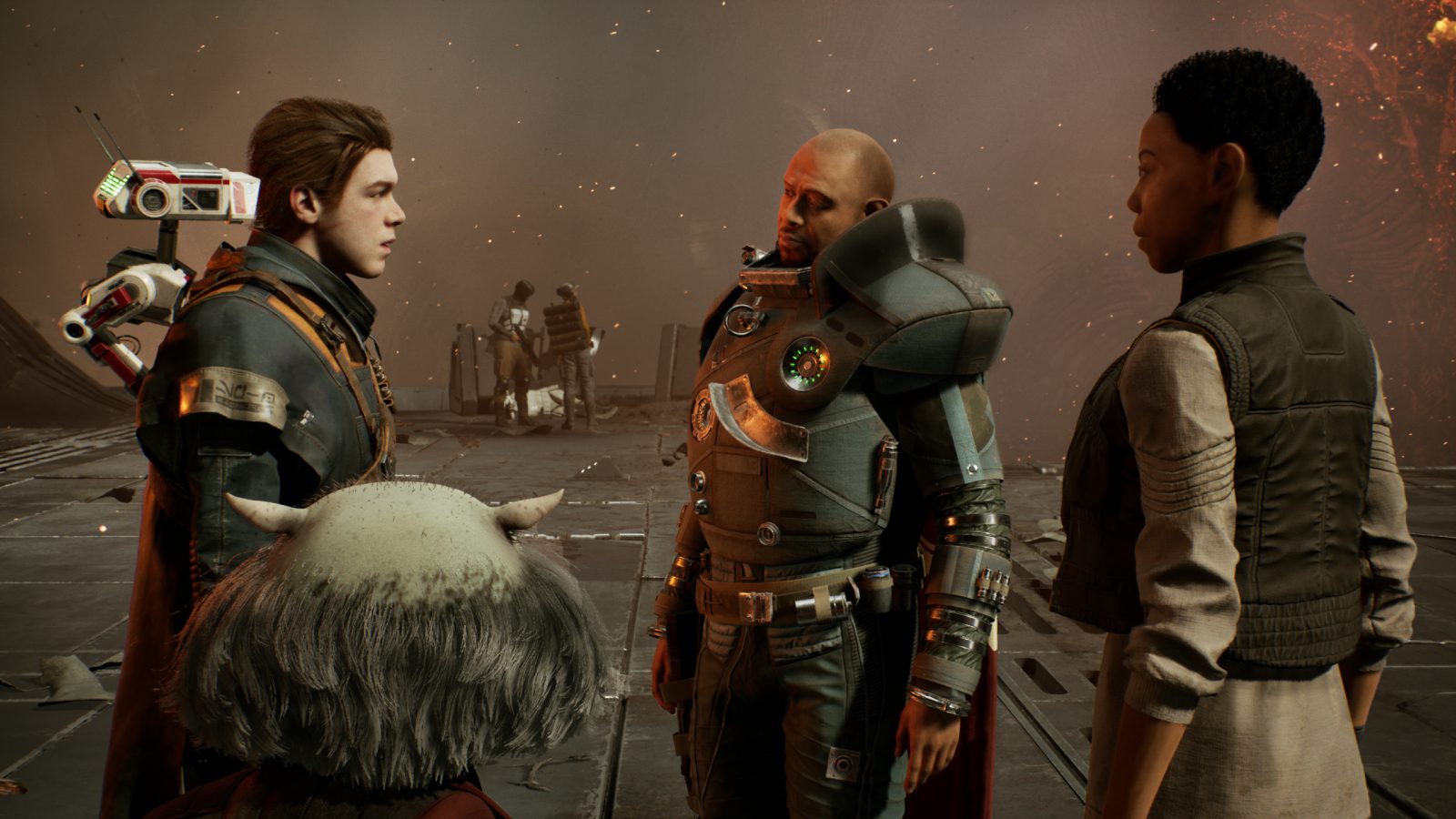 We get a bit of plot with this cutscene as well, as e find out that Cal is searching for the elusive Wookiee resistance leader, Tarrful. Gerrera enlists the Jedi’s aid in retaking a nearby processing plant that doubles as a prison camp.

Before we head off for the refinery, we get a quick look at the interior of the ship. Prominently displayed near the entrance is a Holomap, hinting at all of the different planets that Cal will be able to journey to later in the game. 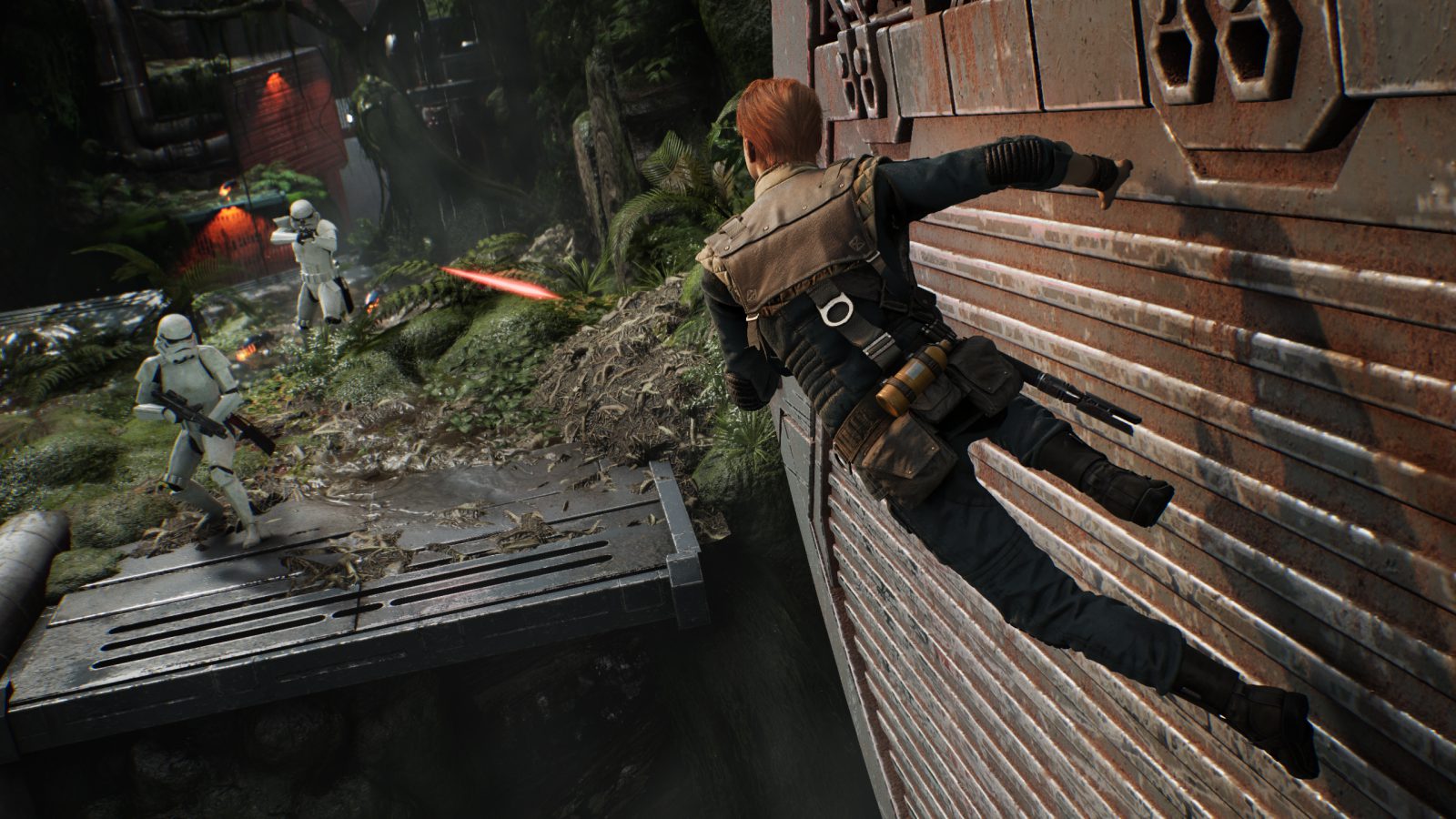 After this, we follow Cal on a pretty standard tutorial section as we approach the refinery. There’s a zip line, and a bit of wall running, as well as force powers and droid deployment for environmental interactions. The droid gets its presumably first unlocked power: droid overcharge, which is used to interact with Imperial tech, much like the interaction with the cutter to unlock the shortcut during the public demo. A brief encounter with a lone Wyyyschokk, and we’re on our way to meet up with Gerrera and his lieutenants to assault the prison camp, which leads into the public demo footage.

Ultimately, the additional footage of the media demo hinted at a lot more potential that the game offers. So far, there’s been a focus on cinematic moments in the early part of the game, and strong indications that, in addition to upgrading Cal’s fighting and force abilities, players will need to upgrade his droid companion as well. 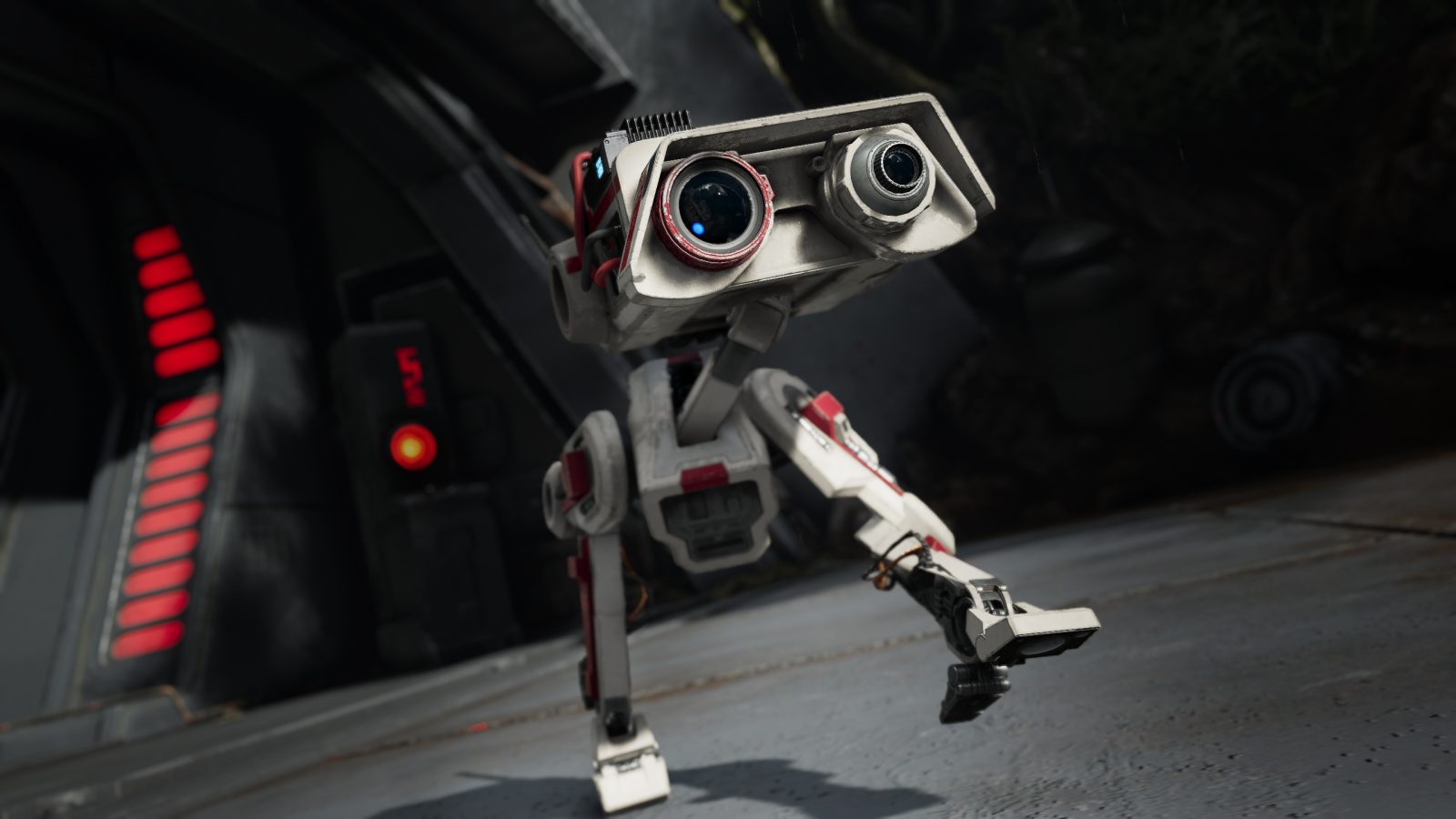 For an early alpha build, which clearly shows that they’re still implementing graphical and gameplay polishes, there’s a lot here to be excited for. The sound design is what a Star Wars game should have, from the screeching roar of Tie Fighter engines, to the soft hum of a lightsaber. There are seamless transitions between in engine cutscenes and gameplay, limiting the disruption of the flow of the game for exposition. The combat looks promising, especially the deflect and counter system, and the force powers look cool and impactful, lending themselves to lots of ingenious applications (such as taking out a Stormtrooper with his own blaster fire).