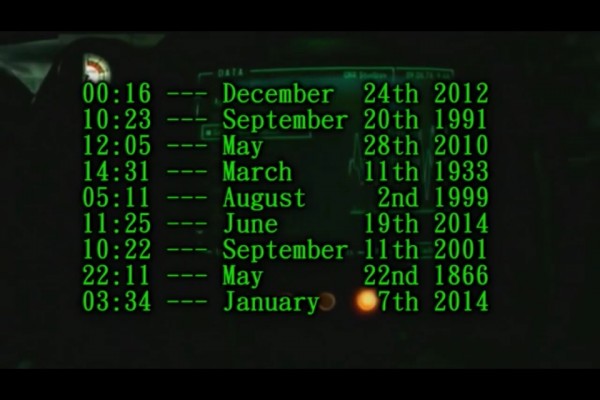 As Halloween looms closer, it’s always fun to reflect on the moments in gaming that keep us awake at night. There are many games that have defined the horror genre, but what about the community that takes the normal and makes it terrifying? For this article, we’d like to give a shoutout to all the creepypasta (a loving mash-up meaning “creepy copy-pasta,” or online stories that are often copy-pasted on forums) that gives us the shivers.

A very famous story, mostly because it is somewhat replicable to anyone owning the game. Somewhere between easter egg and devs hiding files they thought no one would find, this features Fallout’s own Three Dog reading numbers from the grave.

The numbers themselves aren’t interesting, although Three Dog makes some funny remarks and quips still. It was when community members started interpreting the numbers as dates that it got interesting. Celebrity deaths and the BP oil spill accurately predicted by the numbers, and a few more chilling predictions about the future. You can read more at the link here.

We’ll discuss what I consider the two major Pokemon creepypastas here, starting with Pokemon Black. In this supposed Black version, an offshoot of Red/Blue, you receive a GHOST along with your regular starter Pokemon. The GHOST can only use Curse, a move not in the original Red/Blue game. Other Pokemon are unable to attack GHOST, and using CURSE kills any Pokemon in one use – literally, kills them. You also have the option at the end of trainer fights to either let them leave (the Run command) or use Curse again, making the trainer disappear from the overworld and be replaced by a tombstone. After defeating the Elite Four, you’re presented with a “several years later” screen and play as a slow, old man in Lavender Town. There’s no one in the overworld, and the Lavender Town music is always playing. When you visit Pallet Town and your house, you’re met with the ghost of every Pokemon and trainer you’ve killed – ending with a final “battle” against GHOST, who only watches you struggle. The full version can be read in this image.

Lavender Town is the main force behind most creepypasta, with good reason. It’s the Ghost Pokemon’s hometown, features my personal favorite Gym Leader in the series, and it has the creepiest music to ever grace gaming. The track even spawned its own creepypasta – Lavender Town Syndrome. It says that many Japanese teens committed suicide after playing the Lavender Town section, compelled by the music’s piercing high tones. More can be found here.

A bit more light-hearted, this isn’t a creepypasta but a segment on the show Trick of the Mind, featuring Derren Brown. In it, Brown creates an arcade game where the player must shoot zombies that are steadily approaching the screen. Brown uses hypnosis and flashing lights to make the player pass out, then drags him to a room with fake zombies, places a fake gun in his hand and waits. The reaction is priceless, and spawned a few imitation copypastas as well. You can check it out at the video here.

I saved the best for last, as this is easily the best creepy Internet story I’ve ever read. All about a college sophomore who buys a copy of Majora’s Mask at a garage sale, and gradually learns that the cartridge is more than it seems. To summarize it would be a travesty to the story, but the writing is some of the best found-footage-style writing I’ve seen since Marble Hornets. The videos are perfect, the blog postings keep it moving, and there’s always that perfect X factor of “this could happen to anyone.” I cannot recommend this enough for anyone looking to lose some sleep. You can read more about Jadusable’s plight here.

That’s it for our list, but we’d love to hear yours! What creepy bugs, glitches or stories have you found? Haunted by the Hell Valley Trees in SMG2? Save file corrupted by a ghost? Let us know!