Deep in the eldritch rabbit hole of Star Trek fan productions, I uncovered something incredible. For a franchise with such longevity and popularity, it’s only natural that there would be fan productions; and in my experience a surprising number of them are of high quality. If this article gains any traction, I plan on doing a more in-depth overview; but suffice it to say there are a number of fan series and films out there on par with the best of Trek, and far surpass what CBS has been putting out over the past few years. But of all the fan shows I have encountered in my travels, Hidden Frontier is the most…human.

Hidden Frontier is a seven season fan effort that tells a continuous narrative taking off just after the end of the Dominion War in Deep Space Nine. In the Briar Patch, an unusual area of space unnavigable at warp speed, a new (or perhaps very old) threat emerges to test the young alliance formed by the war. What starts as an amusing oddity quickly pulls you in with compelling characters and complex plots. The scientific and political ramifications of these plotlines are not only fascinating but morally challenging. The long web that it weaves is dense and thoroughly rewarding. Most would dismiss Hidden Frontier out of hand because the budget seems to have been precisely nothing, but those who do are missing out on some of the best Star Trek I’ve ever had the pleasure to witness. 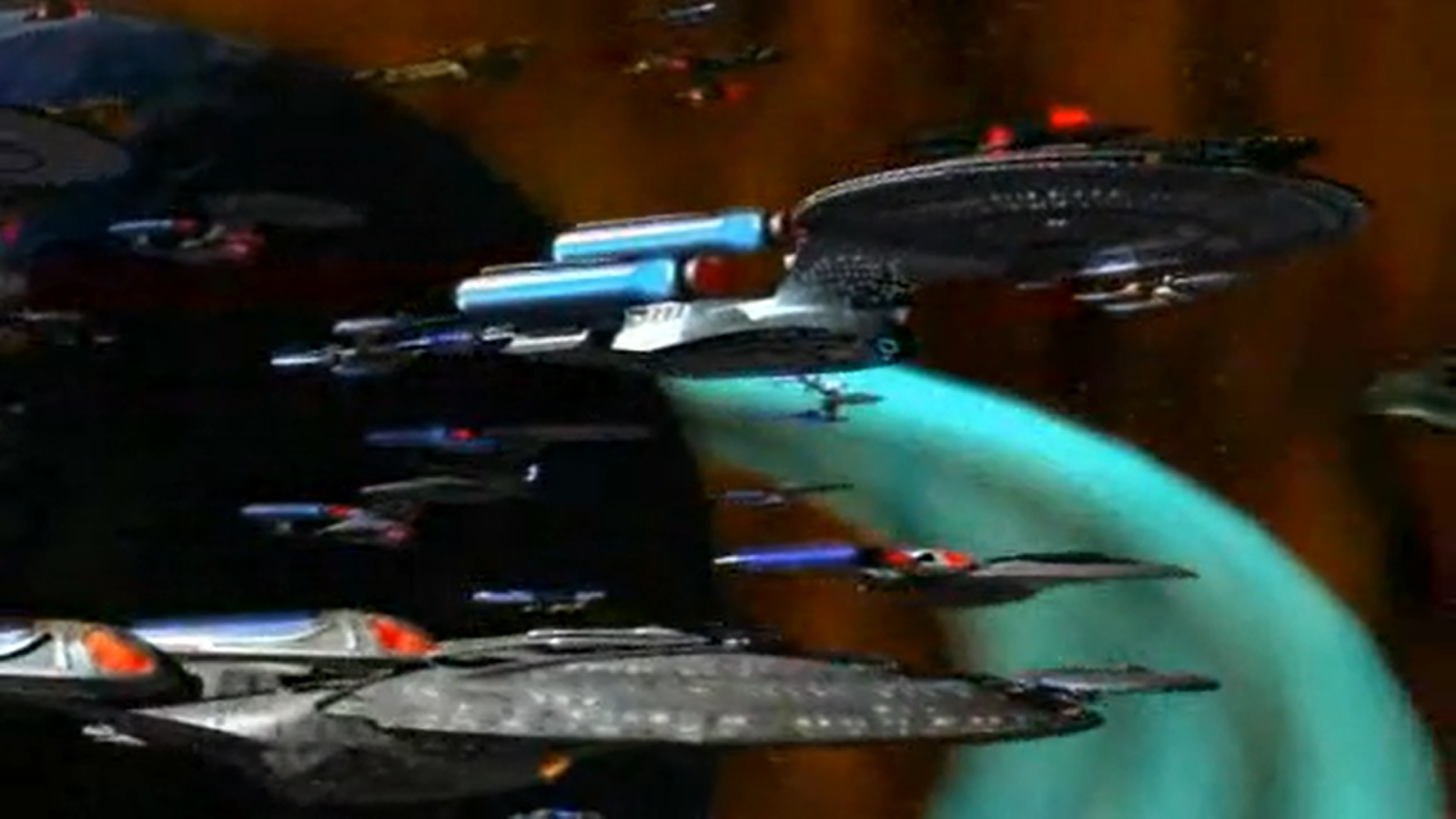 I want to come right out and say this: Hidden Frontier is not for everybody. Some of you, and this is by no means a character flaw but a result of personal preference, will be incapable of enjoying this show. First and foremost, it makes no bones about being designed for long term Star Trek fans. If you haven’t at the absolute least watched your way through all of Deep Space Nine, I question if you will have any idea what is going on, because Hidden Frontier assumes you have that knowledge going in. Realistically, you can only truly appreciate everything that HF accomplishes if you have seen everything from the original series onward.

I should also be up front in saying that experiencing this show can be garish. The constraints of the crew were essentially that they had one room with a green screen, and…basically nothing else. The effects were early 2000s CGI, and in early seasons characters are surrounded in an uncomfortable green shimmer. The camera couldn’t be moved at all. HF shows how much limitation can spur creativity, but even so their resources were nothing. At least at the beginning, the effects are bad, the makeup is bad, and the acting is its own subject. You see, while some of the cast were (or became) talented actors, some of them are true amateurs. They were trying their level best and it shows, but acting is not a skill everyone possesses, and they used what resources were available. This leads to a variance of great to good acting switching right over into something astoundingly inadequate. 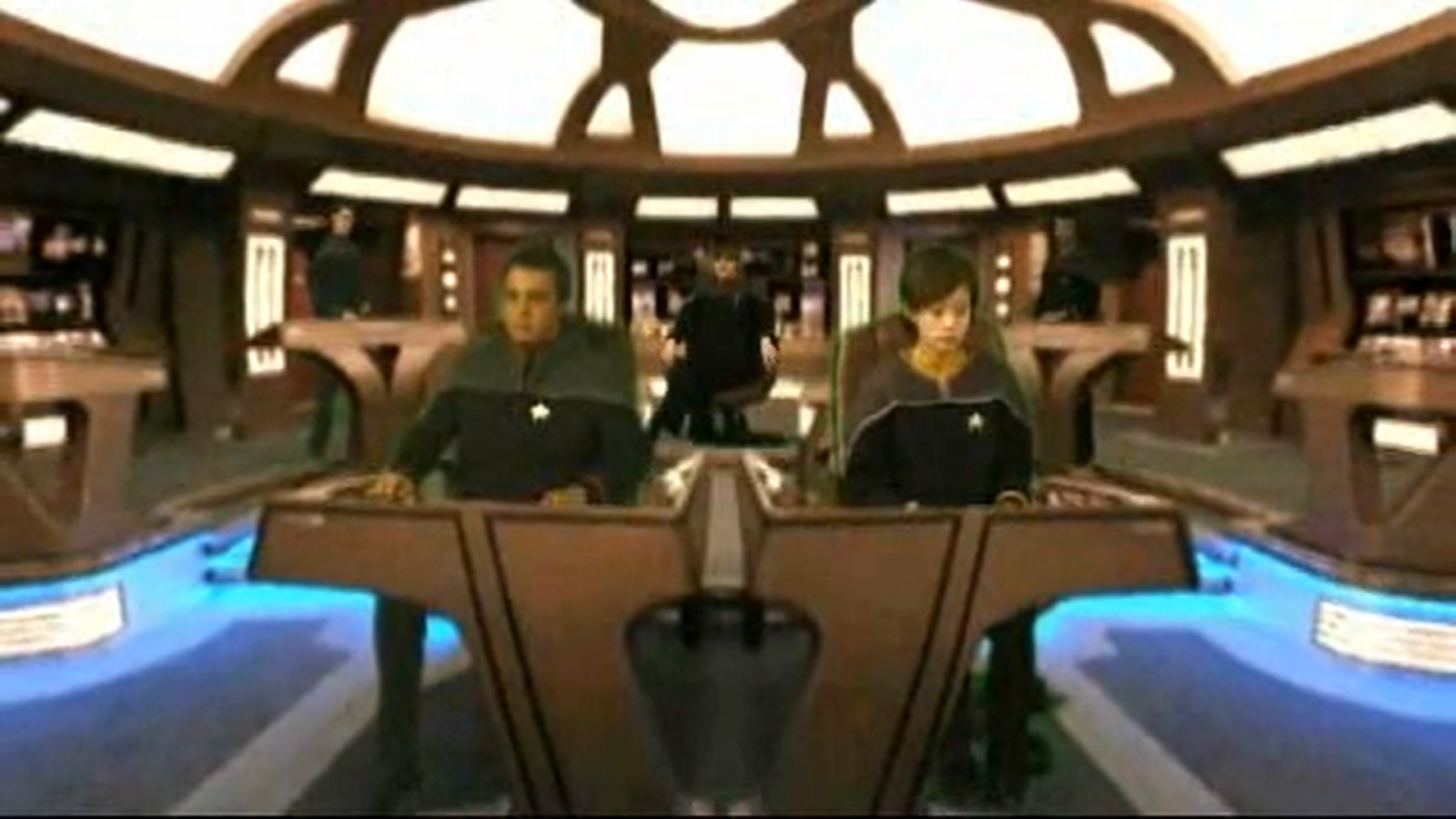 While I think it unfair to judge the show only on its visuals, I understand that it is a drawback

You could laugh at the fumbling efforts that some of the cast put out there, but you find yourself not doing so. You find yourself becoming endeared to it, and not minding the portrayal of true amateurs. Because they kept showing up, improving episode by episode. They put this out for free for seven years because they loved the material that much. It’s the complete opposite of Discovery and Picard, with all the best in equipment and funding, but none of the soul or intelligence we look to Star Trek for.

If they were to take these scripts, add a few million dollars to the budget, and lengthen some earlier episodes, maybe this show would be lauded just among the ranks of DS9. But also, maybe it wouldn’t hold the same charm for me. Maybe part of the reason I loved it so much was because of how singular and impressive an achievement it was, held together by nothing but duct tape and hope.

Coming into its own

As the HF team consistently produced content, they got it down to a science and were able to start producing episodes more quickly and professionally. Things got their start on the USS Angeles, a short series that was never meant for widespread consumption. But with Hidden Frontier, they began to tell a broader, more deliberate narrative. Rob Caves, the creator of Hidden Frontier, recommends season 3 as the starting point. By then the staff had gotten their sea legs and some of the more obvious flaws were out of the way. I say start right at the beginning. The material is shorter and easier to get through, but it will also give you a more complete lens of just how much growth and accomplishment they achieved over the show’s seven year run. Episodes begin at around 15 minutes, but by the finale are over an hour in length. If you want to try out a singular episode to see if Hidden Frontier is your thing, I would recommend Great Starship Robbery or Voyage of the Defiant. 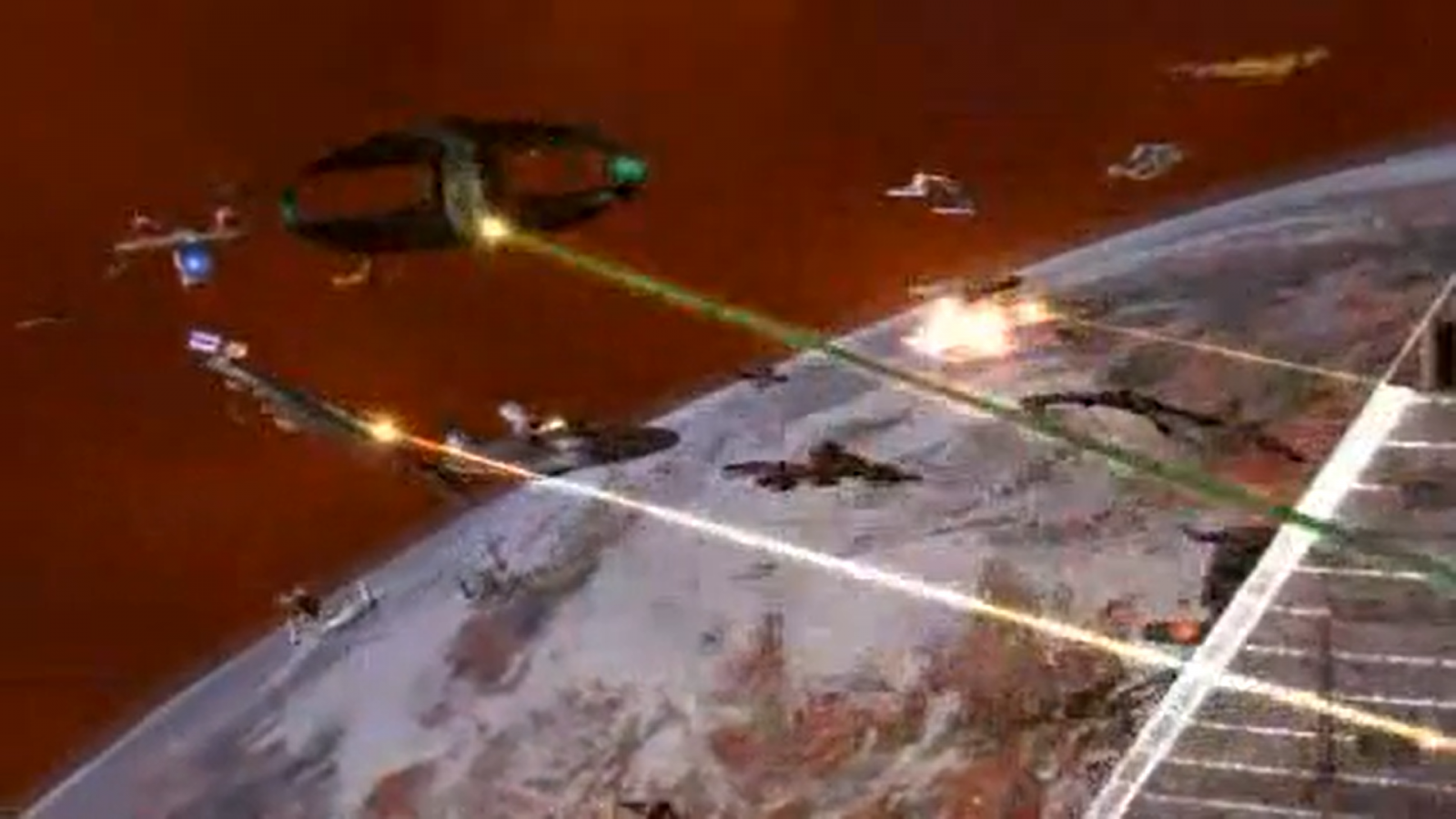 Look, many of you are simply not the audience for this. Many of you will never enjoy it. But please, those brave few who can make it through, I implore you to take that journey. If even a single one of you finds the same heart and sincerity that I did, I will be satisfied with this tribute. Watch as their actors become more comfortable with the material. Watch as the battles become more complex as the special effects team learns CGI. Keep an eye out as the makeup artist and Tellerite doctor, who began learning makeup for Hidden Frontier, ends up with an impressive array of skills by the show’s end. Experience deep yet brilliant callbacks to prior lore, rewarding longtime fans of the franchise. I won’t spoil specifics, but one of my favorite moments is a genius inclusion of a horta geology specialist, hired to solve an impossible problem with an ingeniously simple approach.

Over its seven year run, Hidden Frontier featured complex character arcs, organically enmeshed with one another and the overarching narrative. Risha Denney portrays the nuanced intensity of Elizabeth Shelby, whose tenacity and ambition are tested by the weight of a new command. Adam Browne stuns as a trill with vastly unorthodox viewpoints on the nature of joining and Trill society as a whole. His transition at a certain point in the series leads to an acting challenge that he demolishes. J.T. Tepnapa, beyond being an accomplished engineer and latent psychic, masterfully took part in a gay relationship that is front and center in Hidden Frontier, but never feels anything more than a natural facet of the characters’ ongoing lives. You get to see a multi-season arc of a character coming to terms with his sexuality and his culture’s views on it. Every main character (and most side characters) receive time for their development, and by the end endear you with their perseverance and complexity. Best of all is the inclusion of Star Trek’s setting itself, honeycombed with races and agendas that all feel natural in this series. 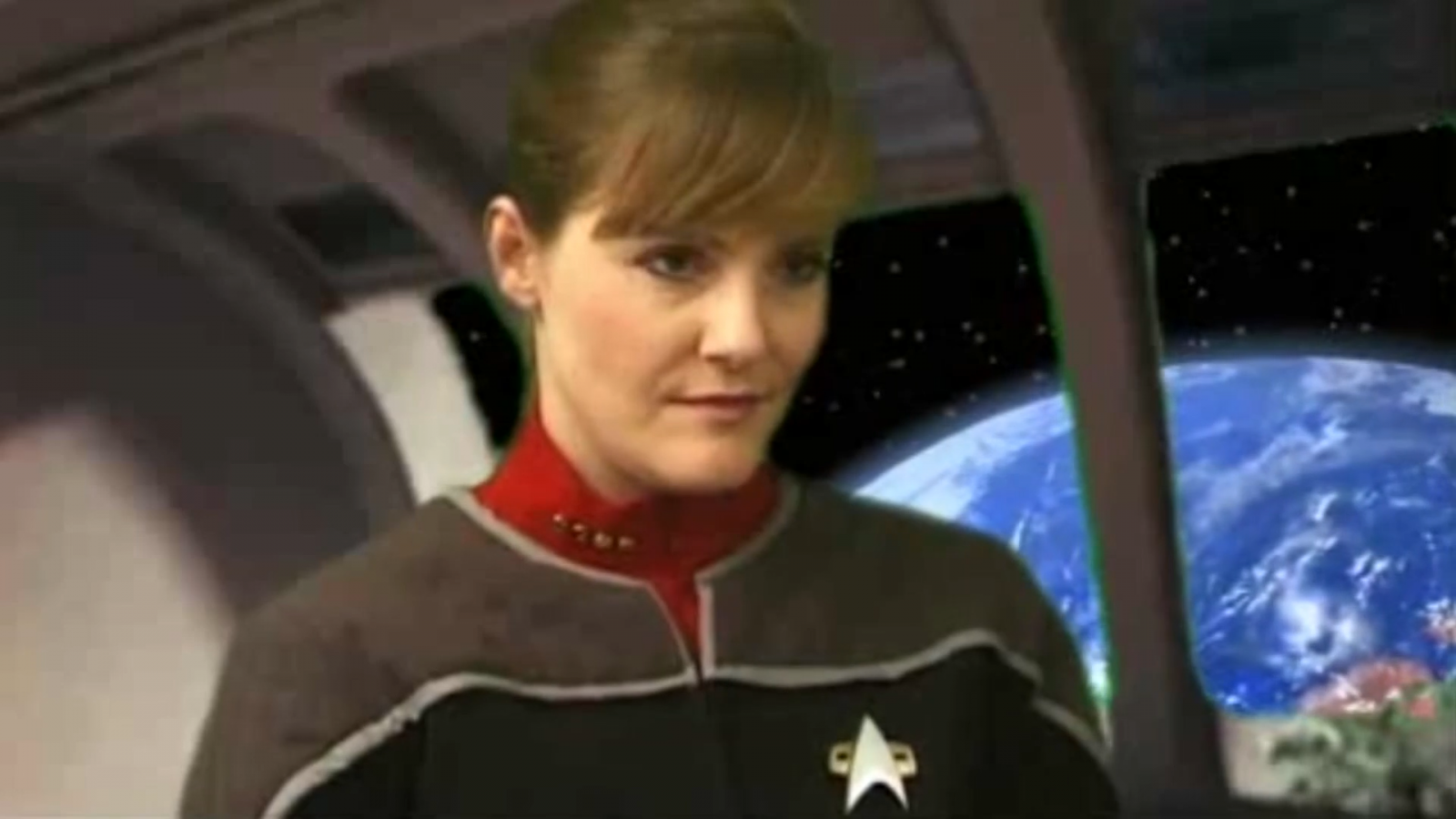 Risha Denney portrays struggles with stress, grief, and the unique challenges of green shimmer with a flair that makes you ignore the latter issue completely

Hidden Frontier’s story is crafted delicately, seven seasons all building on top of one another to set up one final conflict in the finale. A climax that uses every character in the best of their element, not shocking you with incoherent twists but rewarding you for paying attention to the arc of the series. Along the way it touches directly on domestic violence, depression, government overreach, diplomatic grey areas, and so much more.

Hidden Frontier is a rough road, but a substantially powerful one. It’s a journey of maturity and the rediscovery of hope that I think a lot of us need right now. Whatever flaws it has only endear me to it more, because the maniacal audacity of the characters is reflected in the film crew itself, which stuck out the better part of a decade to deliver the impossible. Hidden Frontier is every bit as niche and inaccessible as it is poorly funded, but the same was true of the original series in many respects. Hidden Frontier may not bear the official brand label, but it has all the lore and soul that defined Star Trek all along. 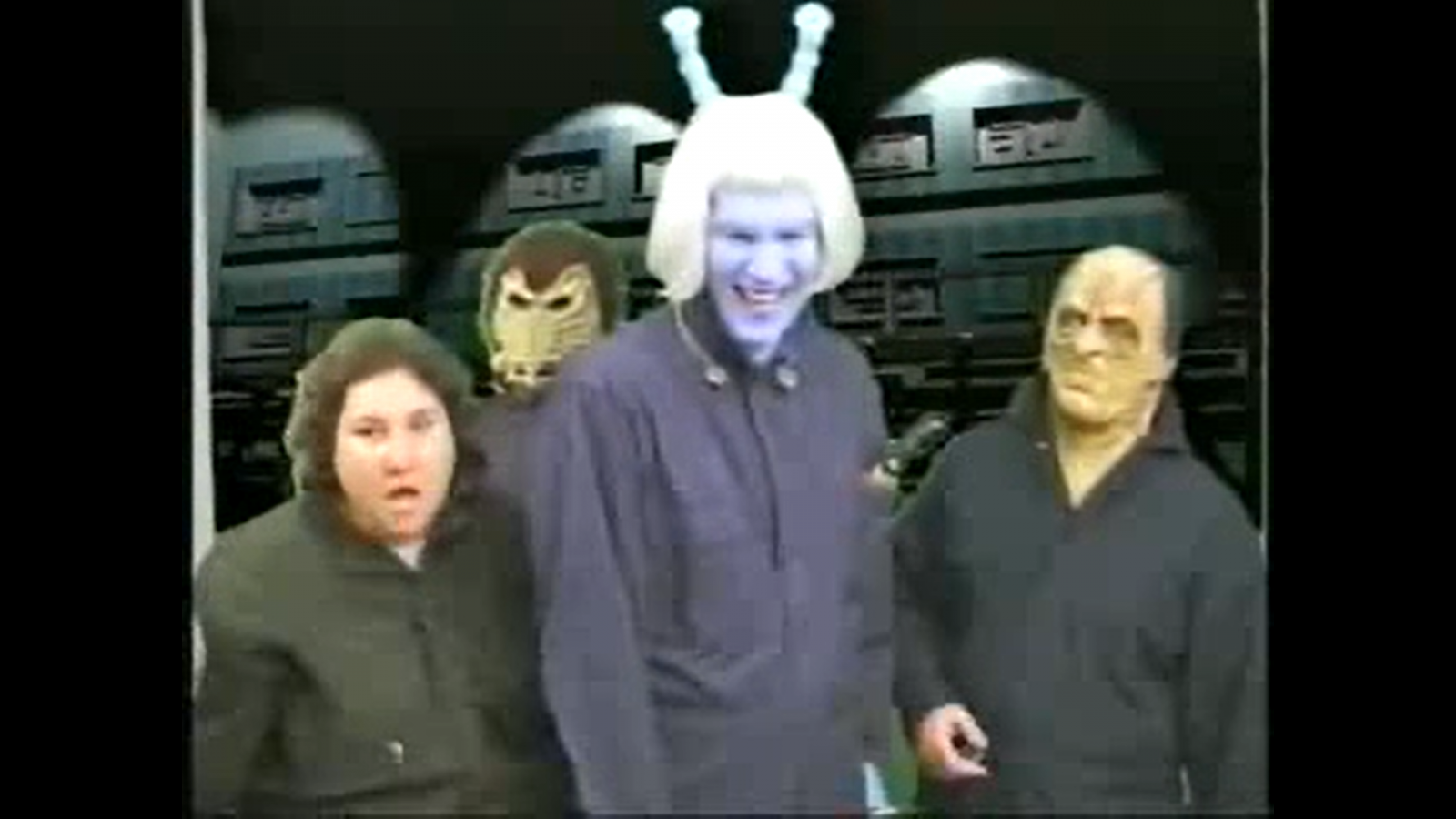 The official site has blooper reels for most episodes, for those who like a peek behind the scenes

For those of you who can make it through to the end, prepare to be rewarded for your loyalty. If you want more, you have it, because Hidden Frontier spawned multiple spinoff shows and audio dramas, some of which lasted for several seasons themselves. The curse that Axanar laid on Star Trek fan films (a subject of another article entirely) put a halt to some of those productions, but by that time the crew had delivered well enough material to keep you occupied for some time.

You can find Hidden Frontier and all related productions on the show’s website, as well as on Youtube or Vimeo. The main site is the best place in my experience, as other platforms have lost or disorganized some episodes over time. But do you know what you can’t find? Any media contact on their website. If someone knows anyone on the Hidden Frontier cast or crew, please reach out to me. I would love to hear their stories directly and share them with the audience. If anyone on that crew happens to be reading this: thank you. I love your show. If it never felt worth it because of long hours or short reach of viewers, I promise you it was. And I could not be more excited to begin the first sequel series, Star Trek: Odyssey.