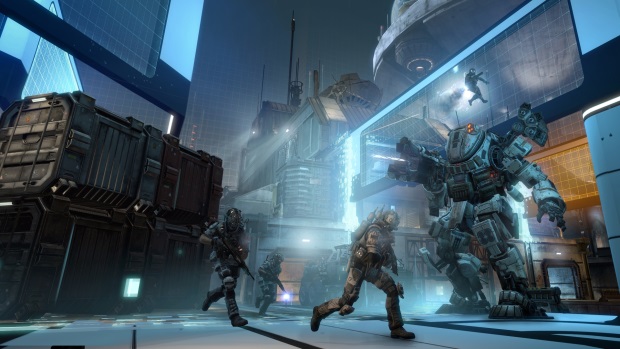 The inevitable onslaught of Titanfall DLC has begun. Expedition, the first of three planned map packs, is now available as either a standalone package or as part of the Titanfall Season Pass. Respawn Entertainment has stated that these packages will be strictly maps-only affairs and that if other additions were to come to the game they would be available for all players. Expedition, then, is clearly targeted to the most devoted gamers, and perhaps a handful of professional players, although Titanfall has yet to really take hold in the competitive scene.

With Expedition comes a new patch—Respawn has continued to improve the game, however incrementally. There is now a tab for the scoreboard in the Last Game Summary screen, and the PC version finally has a way to mute players while in-game, although you would never know it without reading the patch notes. In addition, loadouts can be assigned custom names, and players will finally be punished for bailing mid-game Otherwise, Titanfall is very much business as usual, and this applies to the new maps as well.

The first map revealed for Expedition was the combat simulator arena War Games. It is the most visually arresting of the three, and is a definite contender for the most aesthetically pleasing of all the existing Titanfall maps. Fans wanted a multiplayer level that had the feel and visuals of Titanfall’s tutorial, and Respawn certainly delivered. War Games moves seamlessly between bright Tron-like futuristic spaces and holographic combat environments, as the two blend into each other as though the whole simulation is on the fritz. Opportunities for wall-running are absolutely everywhere, although one must be careful as there is a conspicuously placed bottomless pit right in the center of the level. Sometimes, the claustrophobic interior corridors of War Games can get a little too scrappy making the action a little hard to follow, but otherwise it is a natural extension of the original Titanfall maps both in feel and in quality.

Runoff, the second level included in Expedition, may at first feel like a lazy knockoff of existing Titanfall designs. Textures and buildings appear to be repurposed directly from Rise, and there are some rather obvious deliberate borrowings from Nexus as well. That said, Runoff definitely feels different than the maps that it was spun off from due to its trade of lateral space for verticality. Runoff feels tall—while it may not technically be any taller than some of the other Titanfall maps, the addition of canals beneath an already multi-layered level provides for a lot of potential for map traversal as well as plenty of opportunities for snipers.This all takes place in a space that appears to have the smallest footprint of any Titanfall map, ensuring that battles are always intense—like War Games, it is very easy for skirmishes to become clustered and chaotic very quickly. Runoff is definitely not representative of the best of Respawn’s designs, but has a lot of potential from a gameplay perspective, especially in objective-based modes.

The last map to be added in Expedition, Swampland, is certainly going to be the dark horse of this expansion. Featuring a forest wetlands aesthetic that isn’t quite like anything yet offered in Titanfall, Swampland is at first glance very unassuming. The general design and placement of objectives and buildings is par-for-the-course Titanfall, but unlike existing maps Swampland has a relatively large and open central area that very much changes the expectations of the game. There are still buildings to house objectives, vertical columns from which to gain the high ground, and various trees and large rocks to hide behind, but Swampland lends itself to open engagements that thus far have been relatively uncommon in Titanfall. It’s not a radical design shift, but it is a change of pace, and provides an excellent contrast to the neon future-tech vibe of War Games.

While each of the three new maps in Expedition are well designed in their own way, the question remains if three new maps added into the Titanfall rotation is truly enough for a game that many felt under-delivered in its original release. Respawn has promised more game modes, but they have yet to appear, and there has been no word at all on new weapons, titans, or any other sort of incentive to keep players online. Titanfall was and is a great game, and Titanfall’s maps were and are very well designed, but does it deliver enough at a content level to truly challenge Call of Duty as the current game of choice for mainstream and professional FPS play? Probably not. Does Expedition do anything to meaningfully change that outlook? Definitely not.

Consisting of two very well designed maps and one recycled and repurposed yet still very enjoyable map, Expedition will certainly bring the faithful back to the table for more. Unfortunately, Titanfall still feels a little thin, mostly because a lack of maps was never really its problem. Respawn would do well to examine other FPS expansion packs to see that gamers will likely expect more from paid content than a handful of new maps with no additional features.