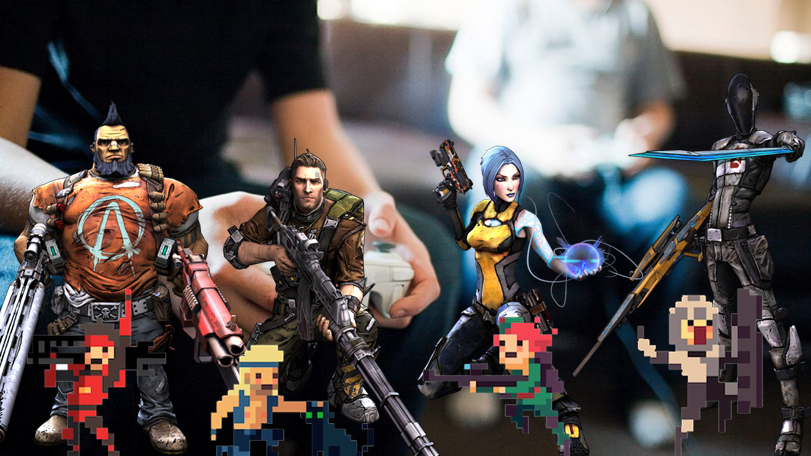 This week Sony released Borderlands 2 on the PS Vita, Super Time Force came out on Xbox platforms, and Sunday gamers will suck as gaming’s favorite pink puff ball in Kirby’s Triple Deluxe. No matter what platform you own, there is something to play for everyone. With Watch Dogs and Mario Kart 8 on the horizon, May doesn’t seem to be a drought month for games like in years past. Could it be that publishers are realizing they can release games outside of the holiday months? Is it the emergence of indie development, who break from traditional publishing conventions, that allow the industry to rethink their release schedules? Or are there simply just too many games to play? Either way, the end result is the same–more games for us, and that is always good.

I also started playing Ghost Trick and Professor Layton and the Last Specter. Both games are incredibly charming in their own way. Ghost Trick’s soundtrack and character animations are very unique and upbeat, even if the story is hiding something more sinister. Level 5’s animation and puzzles are what make the Professor Layton series so popular, and I can see why gamers keep coming back for more.

I’ve also got my roots firmly planted in Plants vs. Zombies 2. I didn’t like the changes they made at first, but now I can’t put my phone down. My only regret is that I am not playing PvZ 2 on an iPad.

I’ve got my fingers excitedly crossed for Watchdogs, while my girlfriend has also demanded an All-Stop on frivolous spending until Mario Kart 8 is also securely in our hands. While this doesn’t exactly help my “games owned over games played” situation that I mentioned last week, nothing can really be done about that because of… well, Mario Kart 8 and Watchdogs.

Also mentioned last week, Dragon’s Dogma: Dark Arisen has gotten the dust brushed off and me and some pals are assigning each other’s pawns classes as we get back into the swing of the game. It should be fun with this pseudo-cooperative effort, which while always a designed feature of the game never really got the attention it wanted…Or at least that that’s the impression I got from all the pawns “ ‘tis usually more busy than this…” complaints whenever I entered their section of the city.

And… in what looks like it will go on  into the foreseeable future, just like a Droste painting of a girl running away, Skyrim…

Dark Souls 2 for the PC has been finished, technically – but between the New Game+ modes, the active community, the multiplayer invasions and the general fun of trying out different builds, odds are I’m going to be spend a lot of time on this one as the months progress. It’s strange how fun the multiplayer is, and the fact that communication is largely restricted to pre-arranged vocabularies with no voice chat really seems to help with that. Playing multiplayer games while being spared from having to actually interact with people beyond fairly basic pre-arranged communication snippers is refreshingly pleasant.

A few upcoming reviews have my attention.  We’ve got Wolfenstein: The New Order in hand, as well as the final version of Van Helsing II.  Naturally they are both due at the same time, so I don’t think I’ll see the sun this weekend.  That’s fine because I’m in Arizona and it’s already “why do I live here?” levels of hot.   Ah, who am I kidding – I’m gonna end up on the motorcycle this weekend at some point.  Does she look like Airwolf?  Well, if it’s not clear enough the giant Airwolf emblem on the back of my helmet is probably a clear indicator.

The other thing I get to do is schedule a metric ton of E3 appointments.  Just under 30 days to go before chaos ensues!  We have an incredible team ready to go for this year, and some professional level cameras.  Expect awesomeness to ensue.

This weekend is bound to be full of work, both in the office and outside. My gaming time is slim, but I expect to be slinking around in my attempt to catch up with my gaming backlog – Thief on Xbox One is starting to grab me… or at least blackjacking me and dumping my body in the shadows.

Peggle 2 will always get my palette-cleaning time, and I may switch over to Child of Light. On the PC side of things I really need to complete some stuff to open up space on my SSD. I just can’t decide which game is going to end quicker – I’m leaning Batman : Arkham Origins or Assassin’s Creed 4. Who knows – maybe I’ll end up enjoying Crossroads of Twilight on my bid to finally finish the Wheel of Time (#tugsbraid).