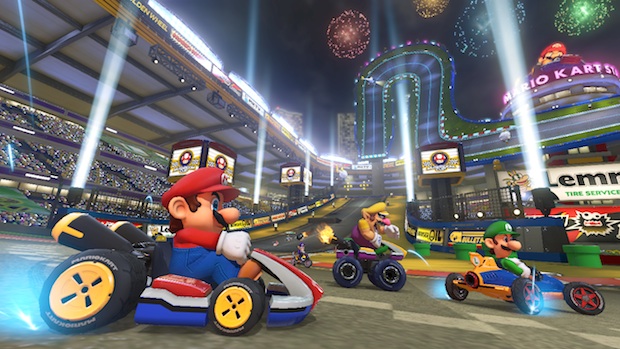 No, Nintendo is content to add new gameplay components slowly, improving the experience over time. And while the newly added items, characters, kart upgrades, and anti-gravity tracks certainly help make Mario Kart 8 the freshest it’s been in years, it still feels lacking when stacked against other arcade racers.

It’s pretty easy to see this culmination of prior works reflected in this title. You’ve got the customizable karts from Mario Kart DS, the gliding and underwater sections from Mario Kart 7, that evil blue shell from Mario Kart 64, and even the speed increasing coins from the original Super Mario Kart. Half of the track list is even ripped from prior games in the series, recreated for the Wii U version.

Like all Mario Kart games before it, Mario Kart 8 pits you against the various denizens of the Mushroom Kingdom in a series of ridiculous races on spectacular courses. Items are strewn about each course, from missile-like shells, to landmine-esque bananas, to new additions like the piranha plant, which attacks any enemy that comes within reach of your kart. Realism is thrown out the window for fast-paced action, and game-changing items are more likely to be earned by racers further behind the pack, meaning that players are constantly jockeying for each position. Even if you end up in last place, a few well-timed salvos can put you right back into the competition.

When choosing your character, you’ll also customize your kart’s various parts. Collecting coins as you race along the various tracks will unlock further additions to your racer’s repertoire, granting them the ability to barrel down courses on a motorcycle, a Vespa-inspired scooter, a car shaped like a pirate ship, and others of varying awesomeness and ridiculousness. It’s more than just for cosmetic purposes – each option affects one of a handful of different stats that change how you approach each race. Want to make up Toad’s speed and weight deficiency with a heavier car? Or perhaps help out Wario’s acceleration a bit with better tires? The choice is up to you.

Once you’ve decided on a character and a kart, you’ll attack one of Mario Kart 8’s various modes in one of three difficulties. Grand Prix is where the main action is – a series of four back-to-back races, where you receive points based on your finishing position of each race. The highest score at the end of four races wins the gold. Other modes like Time Attack, Versus, and Battle round out the list, and are slight variations on the main racing. Time Attack lets you try to perfect the fastest lap around a course, Versus lets you pick and choose the number and type of courses you race on, as well as customize other variables like item appearance and number of competitors.

Battle gives you a different objective – rather than racing against your foes, you’re attempting knock each of them out of the competition by whapping them upside the head with a well placed shell attack or other item in order to remove all three of their precious balloons. While fun, this option is the weakest of the bunch, as you’re only allowed to play battle matches on a small selection of courses, each of them ripped from the main list of tracks – gone is the handful of specially crafted battle courses from older games in the series.

If all of this is sounding familiar, that’s because it’s all been done before in previous games. Even its much-anticipated online modes aren’t all that new, first appearing on the handheld iterations of the series. There’s a rudimentary ranking system, and it’s easy to hop into matches against players from around the world, but like the other modes available, it’s incredibly spartan. What’s here looks, plays, and feels fantastic, but it’s 2014, and we expect more than just handful of options and tracks to race on. There’s no persistent game-wide ranking or levelling system, characters and new kart options are unlocked seemingly arbitrarily, and there’s no career mode to speak of. The only impetus driving you to compete is your own desire to race on the same 32 tracks over and over again. There is a purity to that, but something just feels… missing.

Luckily, the actual act of racing is an absolute blast. It’s amazing what the jump to high-definition can do. Particle effects fill each level with vibrant colors, and there’s a smoothness that hasn’t been seen in this series. It still sucks when you get hit by shell after Bob-omb after banana in quick succession, but it rarely feels unfair. Plus, they’ve finally made a way to counteract the dreaded first-place-seeking blue shell, automatically making Mario Kart 8 better than every other Mario Kart before it.

In addition to the increase in overall fidelity, the track design in Mario Kart 8 is the best that it’s ever been – at least, in regards to the original tracks. Mario Kart 8’s big gimmick this time around is the ability to race upside-down as your kart’s wheels transform into anti-gravity hoverpads. This does two things: first, it makes courses far more interesting to race on. While it doesn’t necessarily change up the feeling of how you race, careening around a vertical turn or spinning around a helix-twisting track feels exhilarating. Second, it adds a few groundbreaking venues for strategy, as certain sections of track let you race along the wall – a useful tactic if someone is gunning for you with a dastardly red shell. This simple change of gravity means courses can warp, twist, and contort in whimsical ways that even previous entries can’t even match.

The remaining 16 tracks are rehashed from prior games, and while they’re still interesting and add a few of the anti-gravity tweaks that make Mario Kart 8’s original courses so entertaining, they’re still rooted in their previous designs. It’s neat to see the SNES’ Donut Plains 3 rendered in high-definition, but it would have been nice to see more unique courses take advantage of the things that make Mario Kart 8 so great.

Once you finish a race, you can edit and share a highlight reel of your accomplishments (or failures). I use the term edit loosely – you can change the length of the video or who and what the video focuses on for specific segments, but you won’t be able to pull off any great cinematic feats. Videos can be viewed on Mario Kart TV, an option inside the game for viewing clips, or they can be uploaded to the Miiverse or to YouTube — a surprisingly forward move, to be sure. It’s a nice inclusion, but it’s not going to set the world on fire.

Mario Kart 8 is a solid racing game, and it’s hands-down the best in the series as it builds off of years of slight improvements. But other than its fluidity, graphical prowess and minute additions, it clings to those tried-and-true modes and options without making any real drive forward. There are truly thrilling moments to be had in Mario Kart 8 — I just wish the overall package felt the same.

If you're looking for a whimsical and accessible racing game to play with your friends and family, Mario Kart 8 is one of the best. Just don't expect any additional content outside of the most basic modes.