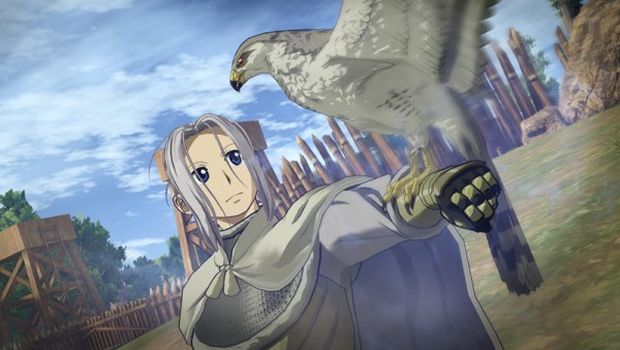 I will always maintain that after years of faithful and predictable game releases, the Koei hack-n-slash legacy is something that can only be compared to itself. The boundaries it seeks to press and the enjoyment it looks to create are almost entirely self-referential, and thankfully so. To judge a Warriors title is to decide how you think it measures up amongst its plentiful peers, or how well it captures the spirit of the legendary characters and settings it is paying tribute to. If you are looking for something more or different, after twenty years of consistency, it’s pretty much like asking James Bond to change his drink of choice.

So, in that context, how well does Arslan: The Warriors of Legend compare to the rest of the Warriors franchise? Well, the short answer to that is pretty damn good, and if you are a fan Koei’s offerings, this might well be an upcoming purchase for you.

The design of Arslan has undergone many interpretations over the years. The current, softer, vision of him is captured just as well in the game as it is in the anime, even during combat.

Arslan: The Warriors of Legend follows the story of Arslan, a young, talented, and infectiously charismatic prince of the fictitious Persian-esque nation of Pars. When his famously powerful kingdom is set upon by the rival nation of Lusitania, a labyrinth of betrayal and deception leads to its army’s defeat, the capture of his father, and his separation from home. Left only with his largely untested skills, the company of the loyal master knight Daryun, and his faith in his people, Arslan sets off on quest to build a new army capable of retaking his home and setting right the sins of both his country’s past and present.

Like the majority of Koei’s Warriors titles, Arslan is based on a great deal of rich lore and detailed characters. Arslan’s exploits extend from an ancient Persian folk-tale Amir Arslan, which has been reborn several times over in popular Japanese novels, mangas, and anime typically referred to as the Heroic Legend of Arslan. The Koei title itself is nearly shot-for-shot based on the most recent anime adaptation, which began just last year and is expected to run its second season at some point this year.

Warriors titles usually don’t have an anime or currently existing work to pull from when they are being produced, leaving the majority of the real-time storytelling up to the development team itself with inconsistent results. The games are about big battles and heroic moments, and while four or five of those might be plenty for a book, that’s just not enough for even a single playthrough of modern battlefield game.

Fortunately the current Arslan anime has taken that problem off of Koei’s hands and provided a show with plenty of large-scale conflicts a player can fight through. In between these battles we’re treated to sequences from the anime itself. Although not presented in the same animated quality of the show (they are shown in a semi-stop-motion style), they do provide a more entertaining alternative to the text-filled slides some Warriors games put up.

The large scale battles depicted in the Arslan stories are a perfect fit for the Warriors series, wonderfully echoing the Romance of Three Kingdoms novels the franchise got its start with.

These cut-scenes merge the action and the narrative together with a much more enjoyable cohesion than many of us Warriors fans have come to expect, and are skippable for those short on time or interest.

This brings us around to the gameplay itself, which is largely unchanged from the Warriors series standard formula. You have your standard attack and heavy attack, which can be alternated between to unleash a variety of powerful combinations. The longer you play the more of these combinations you unlock, making your current character a more and more powerful force on the battlefield.

As enemy hordes surround you you cut them down in droves, stacking up multipliers which can lead to rewards and equipment you can use to customize your character. While some powerful enemies may require a slightly more reserved approach to defeat than others, your tactics rarely vary beyond a few favorite combinations, and eventually muscle memory takes the lead in your combat efforts.

Arslan: Warriors of Legend really mixes it up with the horse mounted combat. While similar to Dynasty Warriors’ mounted combat mechanics, it is more refined and plays a larger part.

In the anime, Arslan’s nation of Pars is famous for their undefeatable cavalry, and to pay tribute to that Arslan: Warriors of Legend includes rush moves similar to your character’s super moves. Sometimes in context to the narrative and other times at random or when certain conditions are met, a rush location will appear on the battlefield. Upon moving your character to this location and entering a command, you will call all of your nearby units together (and then some) and rush the enemy with a devastating cavalry charge. This ability lasts for a set period of time and can be directed around the battlefield like a tsunami of opponent-pwning-carnage, catapulting your multiplier into insane totals and often routing the foes of an entire area.

The rush ability is one of Arslan: Warriors of Legend’s best additions, providing a devastating counter-balance to the franchise’s traditional combative clutter.

This means that switching between your mount and fighting on foot has different but equally effective advantages and functions, adding a deeper value to an element which in other Warriors incarnations was just a way to quickly get from A to B.

While there are some notable alterations and improvements to the Warriors formula for Arslan: Warriors of Legend, there are still some throwbacks that may muddle your experience.

The graphical and animation quality for Arslan is still more uneven than it really needs to be in this day and age. While the nameless droves of opposition you slaughter don’t need to be as detailed as the playable main characters, they still seem a little bit too stiff and rigid to pass as living foes. On the flip side, there are also noticeable differences in detail amongst main cast in regards to their virtual personality. That is to say, they don’t all come across as equally iconic.

Warriors games, as a concept, are largely about their uncompromising dedication to the flourish of their characters. They are gods among men and peers only amongst one another.

When titles make this an aspect of their focus they also make the more innocuous aspects of their design more important. Things like idle animations and attack sequences matter beyond their effectiveness, they matter in their coolness. Yes, Arslan, who is just a young warrior learning his way around a battlefield should not look as confident and intimidating as Daryun, “ the Knight in Black”; however, he should also not share the posture of 400-foot soldiers he just cut down with his narratively novice skills.

The only reason I (or you) might notice this more in this entry, as opposed to other Warriors games, is because Arslan: Warriors of Legend is trying a little harder. The graphics themselves are sharper and effectively mimicking the anime it’s based on. The colors are vibrant and flow into their cut-scene counterparts with surprising seamlessness. Because of these improvements you’ll possibly find yourself paying more attention to things that might affect your immersion, as fanciful as that may be.

The music of Arslan was my only real letdown. While it does mimic the soundtrack of the anime decently, it’s just not enough to carry or match the epicness of the interactive experience. Ultimately a hack-n-slash game is supposed to be a different type of grind, and a solid soundtrack can do a lot to make those button mashing hours fly by. It’s not that it’s bad, it’s just uninspired to the point of being distracting, and it’s the kind of thing that makes you feel it was far too low on the priorities list.

Arslan: The Warriors of Legend is a faithful and solid addition to the massive Warriors legacy, and bristles with many improvements that can hopefully find their way into other Koei titles. For fans of the anime this is a real treat, and in a rare occasion, since this title largely contains the entire first season of the anime’s story within it, you don’t need to be a fan to enjoy it.

Arslan: The Warriors of Legend

Arslan: Warriors of Legend does a great deal more right than it does wrong, but you would likely already need to be fan of the Koei Warriors games to think so. While the improvements this entry has over typical Warriors games are a big plus and make this title more accessible to players unfamiliar with the content it’s based on, they also shine a brighter light on where the developers are not evenly spreading their attention to detail. The right combination of patches and DLC could possibly make this one of the best Warriors games yet, but the unlikelihood of that happening makes this just another example of action game mediocrity; albeit an exceptional one.

I've been a huge fan and critic of games and movies ever since I had a voice to speak about them. I love power and influence of great storytelling, interactive and otherwise, and now want to be more than just a consumer. My biggest strength in this regard? Almost every time, I'm fair all the time.
Related Articles: Arslan: The Warriors of Legend
Share
Tweet
Share
Submit