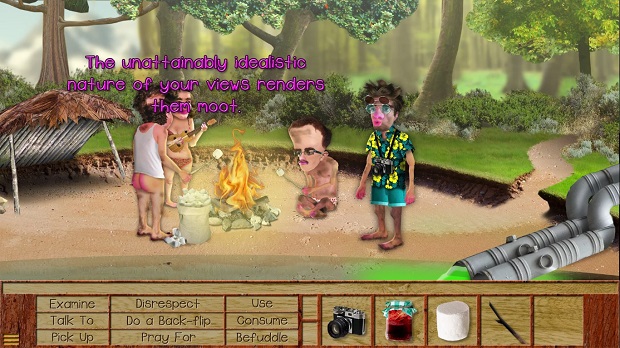 The Preposterous Awesomeness of Everything is the first commercial game put out by solo developer Joe Richardson. It’s a point-and-click title with an inventory system, a verb panel, and the promise of “intellectually stimulating satirical shenanigans.”

In the beginning of the game, your character wakes up on the beach, naked and confused. Soon you learn you’re stranded on an uncivilized island, gathering berries and envying those stronger in the community for possessing the ability to hunt the local wildlife. However, there are a couple of anachronisms. Though everyone is speaking about age-old concepts, they’re using modern language.

Oh yeah, and there’s a big pile of rocket ship parts in that clearing over there. That’s probably nothing.

After chatting with your friend Drake, far and away the most intellectual in your group, he suggests you rally everyone together to build the rocket and kickstart progress in your little world. The steps you take from this point on will decide the fate of you and your fellow inhabitants.

For instance, when you return to the clearing armed with this new knowledge, if you choose to mindlessly play around with the metal parts like everyone else instead of trying to put together the rocket, your society never becomes civilized and the game ends. There are multiple endings to discover throughout the course of the game, each with its own horrible epilogue. Can you find the most beneficial outcome? Is there one to be found?

You heard it right here, folks: the internet will someday kill you.

Undoubtedly the first thing you’ll notice about this game is the artwork, which pieces every character together in collages. It is a unique style that has a way of making everyone look like exaggerated caricatures, which isn’t wrong.

There are several things I had a hard time deciding if I liked about this game, and one of them is that the characters are pretty much all tropes. Byron is a meathead, big and muscly but lacking in brains so he’s easily led. Helen is a fame-obsessed blonde who becomes a perpetual drunk as soon as the community develops enough to be able to construct a mini bar. The guy you’re playing is one of few who isn’t just a stock character, and that’s partly because he doesn’t have much of a personality at all.

This is some of why I’m torn, though. Because it’s a satire, it’s not necessarily a bad thing that the main character is a blank slate. This allows you to step into his shoes and learn the lessons that he learns. And is it truly a negative to have a satire populated with one-dimensional characters? If they were more fleshed out, would that detract from the message and shift the focus to the narrative? It’s hard to say.

However, another thing I’ve been stuck on is that the game doesn’t trust you to understand that it’s satirical. Examples such as Jonathan Swift’s “A Modest Proposal” are written in a straightforward, believable voice, but it doesn’t explain itself within the text or make anything too obvious. It lets the reader figure out for themselves what the deeper meaning is. In The Preposterous Awesomeness of Everything, on the other hand, you can literally sit at a computer and have your character create a game to explain to the general masses all that’s wrong with their society. This action is not only meta as hell, but it insults the audience’s intelligence. “Just in case you hadn’t figured out by now, this is the purpose of the game!” it spells out for you.

Hint: Much like the works of Rabelais, this is also a satire!

At one point in the story you have to campaign against others in the community for the title of Project Manager, or the person in charge of getting the rocket off the ground. To gain any traction with the crowd, the Project Manager candidates have to wildly lie about themselves and their opponents. Most everyone realizes that modern politics have more or less become about charisma and false promises; this idea isn’t ground-breaking.

I will say, there are at least a few thought-provoking tidbits to be found. YouTube personality PewDiePie makes a cameo as The Dangerous Lunatic, a community member who has been ostracized for causing a ruckus while trying to advertise local goods. The commentary his character’s backstory makes on contemporary marketing is actually fairly clever and made me think.

There have also been some zany moments in this game that have made me laugh, but it has a way of going over the top just because it can. Sometimes it’s strange and unpredictable just for the sake of being so, resulting in some endings that don’t quite make sense. Small, seemingly innocuous choices can catapult you into disaster and you have to start over. Is that part of the message, or is it just a way to manufacture more endings you could get?

I had to chuckle at the absurdity of some of the cutscenes.

Don’t get me wrong, I like that there are multiple endings, as out-of-left-field as some of them may be, and I’m curious to see just how many there are. I also like that there are several verbs you use to interact with the world, such as “Disrespect,” “Pick Up,” and “Befuddle.” Even though verbs such as “Pray For” and “Do a Backflip” don’t seem to have much purpose, I’m thoroughly amused that they were included. This game is a bit of an oddball and it embraces that fact.

I initially gravitated toward The Preposterous Awesomeness of Everything because it looked weird, I will admit. Parts of it are bizarre and complex, with thousands of words of story, dialogue, and descriptions. Conversely, parts of it are too flat and don’t seem to fit into the quirky collage of a world.

Just because I’m struggling with what to make of it doesn’t mean you should necessarily count it out. I haven’t always been super compelled to play it, but it has a way of being just interesting enough to lure me back in. For the first publicly promoted game by a single developer, it certainly isn’t bad, but I have to be honest and call it what it is: a mixed bag.

The Preposterous Awesomeness of Everything

The Preposterous Awesomeness of Everything is a strange little game that provides a satirical commentary on society today in both smartly subtle and knock-you-on-the-head obvious ways. The cast of characters is mostly comprised of caricatures, but your verb choices and dialogue options let you interact with them in numerous ways. If you’re willing to spend some time with it in all its eccentricity and endure its low moments, it rewards you with different endings to uncover.

Sarah Marchant is an office admin for a nerdy t-shirt company. She has a soft spot for indie games, a passion for story-driven titles, and a weakness for cooking games and anything with zombies.
Related Articles: The Preposterous Awesomeness of Everything
Share
Tweet
Share
Submit