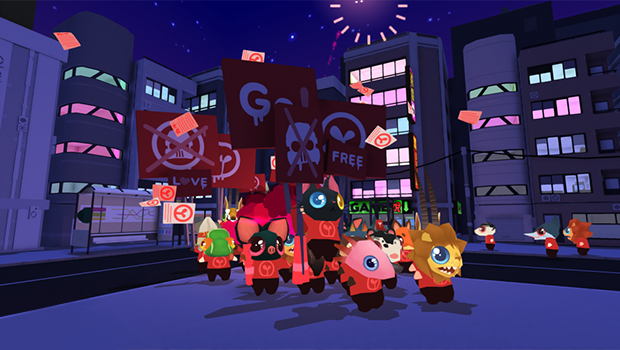 Anarchy has never been this cute, nor this fun. I wasn’t sure what to expect from a riot simulator with a name like Anarcute, but it turns out that this game provides delightful gameplay and great style. There is not a great deal of story to Anarcute; it opens with you controlling pack of bunnies and alligators who are ready to riot against their evil, corporate overlords. Who are these overlords? When and how did they gain power? What, other than their gas masks, makes them evil?

While those are good questions which Anarcute could have answered, you quickly realize that you’re playing as a mass of albino bunnies who can throw gasoline trucks to obliterate your enemies in a ball of fire, so you don’t really care that you don’t know.

Anarcute is incredibly endearing and fun to play. Light on menus and tutorials, instructions are presented graffiti, spraypainted across the environment. I was concerned that Anarcute would be a mindless smash-and-dash game, but it turns out that successful anarchy requires a huge amount of planning. Sure, you can hurl that gasoline truck at the nearest group of enemies and watch them explode in a flaming inferno, but you may soon need to use that truck to bring down a police barricade and free your captured animal friends. You can destroy that building right now just for the fun of it, but if you time your demolition correctly, you can send it toppling down onto the patrolling riot squad, saving yourself the casualties caused by a direct encounter.

Keeping your rioters alive is incredibly important in Anarcute, and seeing the lifeless corpses of your adorable friends littering the sidewalk is more than simply demoralizing. While a mob of 10 animals can perform a powerful stomp to damage and stun your enemies, you need a mob of at least 30 rioters in order to destroy a building. Sometimes, potential rioters are trapped within buildings, and you will not be able to set them free, letting them join your riot, if you do not already have a big enough mob. That said, it’s not always about numbers. If your mob is too small to bring down a building, you may be able to take control of one of the enemy’s wrecking balls and use it to liberate your friends.

Almost everything in the environment can be interacted with or destroyed, which is incredibly satisfying. Fences, bicycles, picnic benches and even cars can be picked up and hurled at the enemy. Trees and light posts can be felled, and enemy laser weapons can be hijacked and used for your own means. Ramen stands, oddly enough, seem to be one of the few elements which rioters cannot use or destroy.

As vicious as they are cute.

Different levels have varying objectives, which helps keep each mission feeling fresh and interesting. “Capture the flag” and “destroy the radio antenna” are frequently occurring themes, and your efforts are often impeded by barriers which need to be blown up, laser beams which must be avoided, and helicopters which, if they spot you, will alert every riot patrol officer in the area of your location. One level even sees a single raccoon sneaking through the streets of Paris to take down a propaganda-touting radio station. As heavily armed as the enemy officers are, any direct encounter would be the end for our lone hero, so stealth is absolutely required. At least, it’s required until stealth stops being an option, at which point a wise raccoon simply takes out a solitary guard by crushing him under a compact car. It turns out discretion is not always the better part of valor.

Boss battles in Anarcute are especially challenging, and reminiscent of The Legend of Zelda. Each boss has its own, unique strategy which you must uncover. Anarcute requires skill as well as tactics; often, even after I figured the correct strategy, it would take me several tries to successfully pull it off and defeat the boss.

Your performance is rated at the end of each level, judged by a combination of the time it took to clear the level, mob size, and number of enemies which you killed. Good scores are rewarded with tokens, which can be redeemed in a soda dispenser to unlock various powerups for your mob. These are easily earned and provide your mob with bonuses such as speed boosts, more powerful attacks, and even momentary invincibility.

After liberating each city, you will be treated to a beautifully animated sequence narrated in Sims-style gibberish, summarizing the enemy’s reaction to your earlier efforts and announcing which city they will be migrating to. These shorts have a great style and terribly entertaining, even if the story generally amounts to nothing more than “Oops, we lost that city, time to move to the next!”

I found controlling the mob to be one of the most unexpectedly fascinating elements of Anarcute. You don’t play as one character, but control the mob as a whole, and that mob moves like a swarm of insects or a flock of birds. When moving forward, the riot forms a column, some rioters moving faster than others; but when you stop moving, the front line swells, the mob becoming wider and more narrow. The bigger the mob is, the more it flexes, making it difficult to predict the movement of the outliers. This requires some quick critical thinking as you navigate the map: Can we all make it through that alley before the laser beams turn back on and fries the stragglers? If I stop moving so that guard won’t see me, will the mob spread out enough to be seen by that guard over there?

While Anarcute is a good, fun game, it’s filled with the kind of little details which make it great and result in a few laugh-out-loud moments. If you charge recklessly through an explosion, your rioters will come out blackened and sooty. Throwing a particularly well-aimed object at a riot officer will cause them to fly into the air and splat against your screen, like an insect on a windshield. You can even customize your mob, from coordinated shirts to selecting what species of animals will join your riot. While one of the big points of the game is to collect a variety of animals, I found nothing more entertaining than sending a school of dead-eyed carp on a mission to blow up a building. Seriously, have you ever seen anything more terrifying?

The mob is expanding

The music fits perfectly with the game, and I’ve found myself singing the theme song for day. The score is upbeat and fun while still setting the mood for each level. I absolutely believe this is the music these animals would listen to while tearing apart the city apart in the name of revolution.

Anarcute is an unexpected treat, high on style and charm. As fun as it is challenging, I constantly found myself eager to play more. I did not encounter a single bug, and the quick load times made it a joy to play. Quirky, entertaining and addicting, Anarcute will keep ace players busy for five to six hours, though completionists will likely spend a bit more time in order to unlock every boost and rescue all the different animal species. Anarcute is available in the Steam store, priced at $15.

Charming and fast paced, Anarcute is a delightfully quirky little game. Light on story but high on style, this addicting riot simulator offers five to six hours of adorable destruction and cute, colorful animals. As challenging as it is fun, Anarcute requires tactical thinking and quick reflexes. Anarchy has never been this adorable.