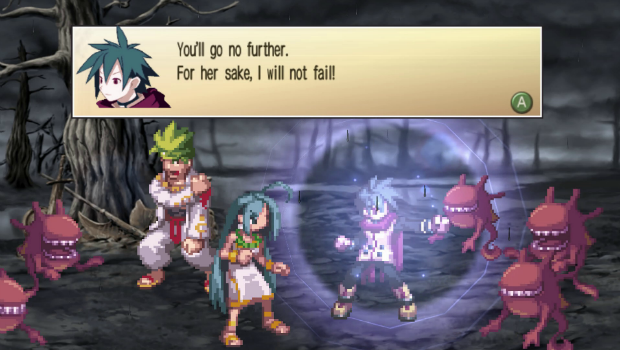 No matter how sweet the taste, if you are given the same fruit over and over again, you will soon wish for something new.  The same is true with Phantom Brave PC, the game’s fourth re-release.  With no new features to differentiate from previous ports, Phantom Brave PC is a wonderful game that will hopefully find new life with young RPG fans, but leaves die-hard fans wishing for a true sequel, or new game using Phantom Brave’s excellent battle system.

Phantom Brave tells the story of a young girl named Marona, who is orphaned after an invasion by the great demon Sulphur into Iviore, her home world, causes the death of her parents, as well as their battle companion Ash.  An incantation spoke by Marona’s father bound Ash’s phantom to Earth as the protector of the young girl, who shared her parents ability to communicate, bind, and control phantoms in the living world.  Together they discover a plot for Sulphur’s return, and seek to save the world from his demonic grasp.

That ability is the central story driving mechanic, as well as the primary battle mechanic wielded by Marona in the field.  Unlike Disgaea, its parent and predecessor, that brought characters into the field of battle using a static “portal” space, Phantom Brave uses this “Confine” ability to bring combatants into the fight.  Marona binds the phantom into an item on the battlefield, and the the phantom is able to stay and fight for a set number of turns before being cast back into the great void.

That unique mechanic makes Phantom Brave a game where strategy can vary greatly, because each and every aspect of battle is at your command.  The characters you deploy, the abilities they use, and the placement in battle they will take is up to you, and the game can be beaten with countless party arrangements.

Phantoms fight for young Marona and inhabit her island home, providing services and de facto protection.  Characters are hired through Marona on the island which serves as a base of operations.  There are fighters of different types, witches, archers, and other normal class types, as well as service characters like merchants, blacksmiths, fusionists, and others that can do battle, but primarily serve as service providers on the island.  Some characters, such as the healer, serve both functions effectively.

Defeating most human characters once will allow you to create that class type, and the game also allows you to make companions of the enemies you fight after you kill a certain amount in battle.  At the end, there are far more class types than characters you can have.  Each character has different ability grades for attacks of each type, and these can be trained up by equipping items with the corresponding attack type.

Items in the game are an oddity and part of the fun that endears Phantom Brave over time.  More standard battling equipment can be purchased from the merchant on the island, such as spears, knives and the like.  Items located in field of battle are more varied, mixing elements of the world itself with strange and wacky paraphernalia.  This provides players with a large number of weapon options, from blades of steel to blades of grass.  Field items can be claimed if a confined phantom “returns” from battle, with each character having a different percentage chance of taking the item back with them.

All of that combined makes Phantom Brave the most underrated and underappreciated RPG from the PlayStation 2 era.  That statement works great in a retrospective on the original, but with this being a new release in 2016, the expectation is that something would improve.

The last two re-releases, “The Hermuda Triangle” for the PlayStation Portable, and “We Meet Again” for the Nintendo Wii made slight changes, with the former adding a secondary and very short storyline “Another Marona” as well as a number of new items, and the latter making graphical improvements to the backgrounds and menus, but NOT the in-game sprites for locations, items and characters.

All of these changes are present in Phantom Brave PC, but there are no unique additions to this game at all.  No new characters, no improved sprites, no storylines, no changes whatsoever.  The differences playing the game on PC as opposed to with a controller is slight, with this being a highly advanced point, click, and point again style RPG.  Other than the thrill of a control learning curve, Phantom Brave PC is empty of any change.

The graphics of Phantom Brave were primitive even at the game’s launch, with PlayStation 1 era polygons and sprites being used in the late stages of the PlayStation 2’s lifetime.  The artwork for the backgrounds and the menus have been re-done prior in “We Meet Again” and are even sharper in the PC version, but this is in contrast to the aforementioned sprites, still in their original state, which now appear so faded and pixelated that it seems as if the game simply isn’t loading correctly.

That an improvement so basic was ignored is an insult to fans who’ve waited for this moment for all their lives, who will no doubt be enticed by this new version only to find it is the same ol’ tune. The fact that the tune is, perhaps, the most beautiful of its time does not preclude it from the ill effects of aging.

Time claimed Phil Collins’ “Sussudio”, and it is slowly claiming the gentle song of Phantom Brave as well, as timeless as it may have seemed.  Releasing the game with no improvement only serves to contrast playing Phantom Brave once more from another day in paradise.  Frankly, if they can’t even improve the sprites, much less give us new content, I don’t care anymore.  Others fans shouldn’t care any more either, but I would recommend this release for anyone who hasn’t played Phantom Brave prior, so you can see it with your own two eyes.

Phantom Brave is an all-timer, but Phantom Brave PC feels much more like a screenprinted masterwork than the real thing. Glossed up slightly, but with very little to no changes since the last re-release, Phantom Brave PC is the least impressive of all. That said, the game itself is still wonderfully great, and new players will be rewarded with the cool breeze of phantoms coming in the air tonight.

Patrick Rost has been with Gaming Trend since 2013. At first focused on sports coverage, Patrick has gone on to cover a wide range of games and other products for the website. Outside of Gaming Trend, Patrick writes and records music, grinds perpetually in Elder Scrolls Online (PS4), and lives day to day with his two dogs, Bob and Stella.
Related Articles: Phantom Brave
Share
Tweet
Share
Submit