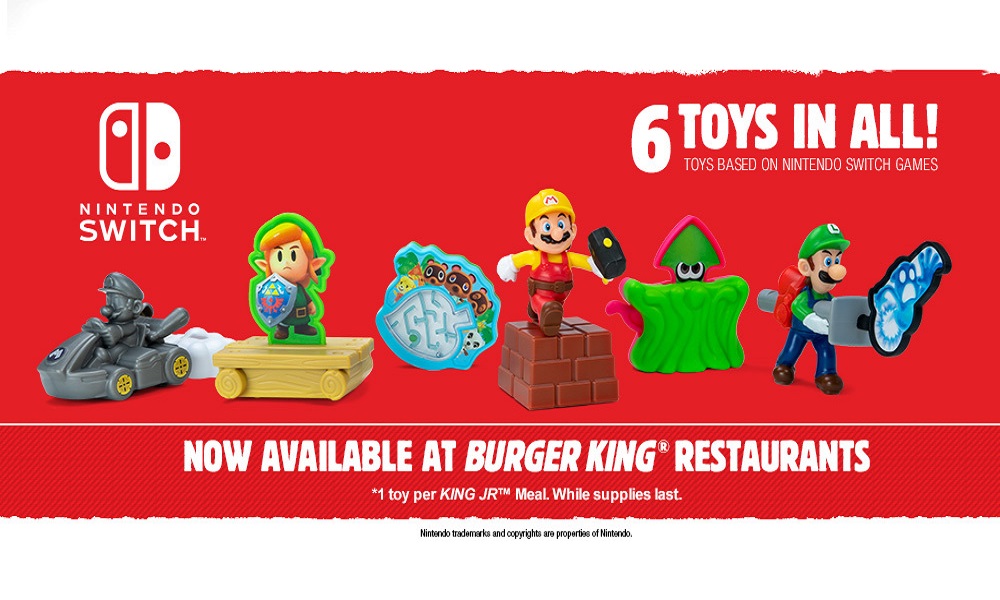 Earlier this week, Nintendo announced that it has worked with fast food chain Burger King to release a line of toys based on Nintendo Switch games to commemorate the launch of Super Mario 3D World + Bowser’s Fury. There will be six different toys based on Switch games, and there will be a giveaway and My Nintendo points up for grabs for dedicated fans.

Beginning Feb. 1 and running through March 15, King Jr Meals at participating Burger King locations across the U.S., Canada and parts of Latin America* will include one of six different toys inspired by Nintendo Switch games. Toys will feature signature characters from games such as Animal Crossing: New Horizons, Mario Kart 8 Deluxe, Luigi’s Mansion 3, Super Mario Maker 2, The Legend of Zelda: Link’s Awakening and Splatoon 2. In celebration of the launch of the Super Mario 3D World + Bowser’s Fury game on Feb. 12, Burger King is also offering families and kids in the continental U.S. a chance to win a Nintendo Switch Prize Pack that includes the game along with a Nintendo Switch system!

In Super Mario 3D World + Bowser’s Fury, you’ll be able to play with friends and family through dozens of colorful stages in which Mario and his friends can use power-ups like the Super Bell, which grants catlike abilities, as you work together to defeat Bowser. In the new Bowser’s Fury adventure, Mario is confronted with a rampaging Bowser. You’ll join forces with Bowser Jr. to venture through an interconnected world made of cat-themed … well, everything! While Mario has had a longtime rivalry with Bowser, king of the Koopas, Nintendo’s partnership with the king of burgers is sure to be a royally fun occasion for all.

“Nintendo has always had a mission of delivering smiles to families, and we’re delighted to work with Burger King to deliver smiles through our partnership together,” said Nick Chavez, Nintendo of America’s Senior Vice President of Sales and Marketing. “Whether families are ringing Mario’s Super Bell power-up or they simply want to ring the dinner bell in style, we hope everyone can look forward to some king-sized Nintendo fun at Burger King.”