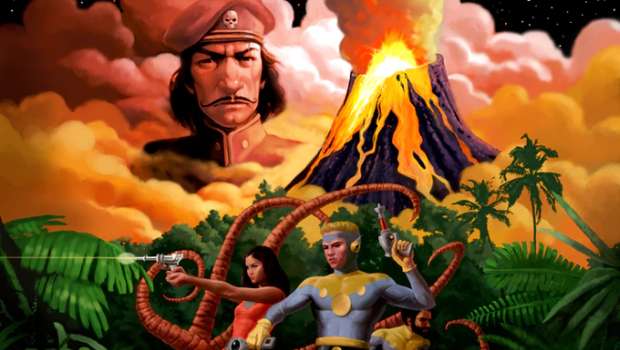 It’s not uncommon to see second editions of games coming out.  Sometimes the gameplay gets tweaked, other times the art or the components get improved.  The Island of Doctor Necreaux is getting a second edition with several tweaks, and it’s up on Kickstarter now.

The diabolical Doctor Necreaux has kidnapped the world’s top scientists and forced them to build a doomsday device. Your mission: Infiltrate Necreaux’s island lair, find the scientists, and escape before the island explodes!

You begin the game by constructing your team of super-spy agents. You create your agent by putting together three skill cards that make your agent unique and give each member of the team a variety of ways to contribute. You roll dice to resolve traps, events, and combat, using your special abilities to mitigate luck. Your goal is to draw and resolve cards from the island adventure deck in as few turns as possible to find the scientists and escape shuttle before the countdown timer reaches zero. You’ll encounter monsters and traps that will snare you if you’re moving too quickly to notice them. Will you keep a steady pace, or will you press your luck to beat the timer? How well will you work together, combining your skills to defeat the traps and terrors on your quest to save the scientists? Find out in The Island of Doctor Necreaux: Second Edition.

It sure does seem to be a good time to be a fan of cooperative games.  If you like adventure and a classic sci-fi setting, then be sure to check it out.