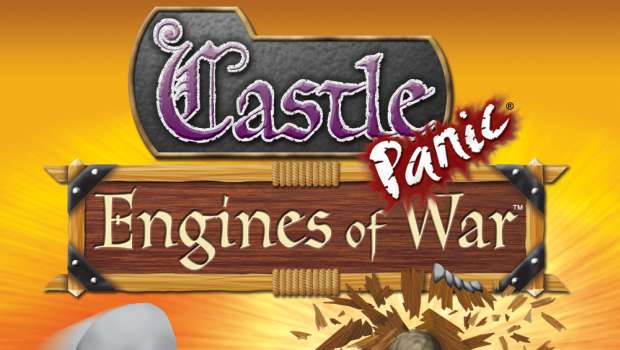 The Castle Panic series has had the longevity that most games wish to have.  It’s hard to believe that it was originally released in 2009 and has two expansions.  Now Fireside Games has announced that a third expansion will be available this November.

Fireside Games is excited to announce that in November of this year Engines of War, the third expansion to Castle Panic, releases for U.S. and international distribution.

Castle Panic, Fireside Games’s top-selling title, is a cooperative tower defense board game in which Monsters emerge from the Forest on the outside of the board and progress along concentric rings to attack the Castle in the center of the board. Players use cards to attack and slay the Monsters in various colored arcs and rings to protect the Castle. The win condition is to slay all 49 Monsters and have at least 1 Castle Tower standing.

This expansion reinvents the game by introducing an Engineer who uses Resource cards to build Catapults, Ballistas, Barricades, Spring Traps, Pits, and Walls to better defend the Castle. The Monsters are also now well-equipped with a Siege Tower, War Wagon, and a Battering Ram, which both protect the Monsters and deepen the threat to the Castle. New varieties of Monsters, such as a Shaman, Breathtaker, and Goblin Saboteurs, have been included as well. These Monsters challenge players by restricting trading and healing Monsters while in play and by banishing cards.

Engines of War adds a light economic mechanic to the game as well as new reasons for players to work together. It can be played with Castle Panic alone or with The Wizard’s Tower and/or The Dark Titan, the first two expansions. Engines of War plays in an hour, accommodates 1–6 players ages 12 and up, and has an MSRP of $17.95. Look for it in stores this November.

It sounds like this expansion will add a little more difficulty to the game without adding a lot of complexity.  If you haven’t played Castle Panic in a while, this might make you want to break it out again.  Be on the lookout for it later this year.