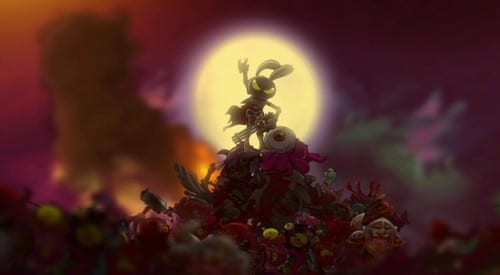 Brimstone, Fire, and Bunnies – oh my!

The floppy-eared prince of Hell has returned, and his fury can only be quenched by a suitably apocalyptic quantity of blood. ​Hell Yeah! Wrath of the Dead Rabbit​ has been released today by Sega, who invites players to rejoin the “hero” of the first game, Ash, as he slaughters his way through Hell in order to exact gruesome vengeance on the poor fool who thought it would be funny to post illicit photos of Ash all over the Hell-ternet!

As the undead rabbit prince of Hell, players will jump, jet, drill, and shoot their way through ten huge, varied locales on a mission to take revenge against the inhabitants of the underworld… There’s only one way to ensure no one ever laughs at Ash again, and that solution is over-the-top, comically-gory levels of hellion on hellion violence!

​Hell Yeah! Wrath of the Dead Rabbit​ is available today for the Playstation Network and tomorrow for Steam and Xbox Live. If you’re in Europe, never fear – fluffy white death arrives on October 3rd! If you simply can’t wait until then, enjoy this launch video.