[Update] The President of publisher Epic Games, Mike Capps, has confirmed with a Tweet that Bulletstorm  developer People Can Fly will be involved in the development. Or in other words, they are handling the development duties for the next Gears of War . This may bode well for the series, as Bulletstorm  had some really cool gameplay features and handled humor quite well, albeit very crass.

Gear heads rejoice! Game Informer magazine has lifted the curtain off next month’s cover story and it confirms that a new Gears of War  title for the Xbox 360 will be announced at Microsoft’s E3 press conference next week.

No details about the game have surfaced yet, but from the cover we can surmise that a shadowy figure is in chains, being escorted by soldiers as if about to be tried in court. Or, he’s being led into an arena for gladiator style combat against a Brumak!

We’ll just have to wait until next week to know for sure. 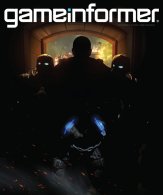