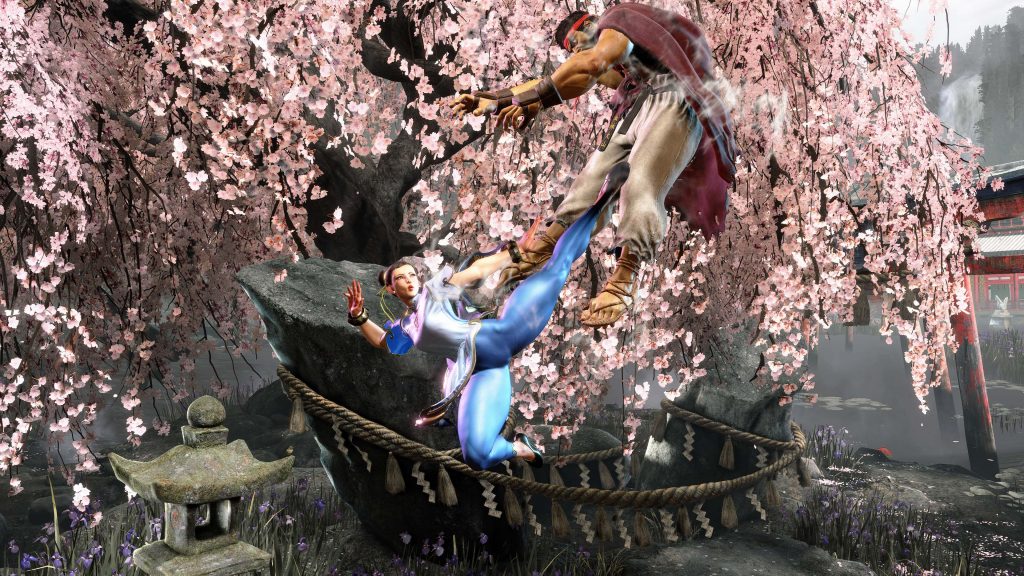 Can I get a hadouken? Street Fighter is one of those franchises everybody remembers, a staple of the fighting game genre. Street Fighter V was great, but not everyone was able to experience it due to the PlayStation exclusivity. That won’t be an issue here, with Street Fighter 6 returning to Xbox and PC in 2023. Check out all the info we had to fight seven evil exes for at the Capcom blog. Wait… I think I’ve got the wrong series…

Street Fighter 6 officially hits the scene in 2023 on PlayStation®5, PlayStation®4, Xbox Series X|S, and PC! With explosive style, a diverse roster of characters, and a new system built for creativity, Street Fighter 6 will redefine the genre and welcome players from all gaming backgrounds.

Beginning its journey back in 1987, the Street Fighter series has attracted a wide spectrum of fans including pro players, artists, collectors, cosplayers, and more. Every person has a different reason for playing Street Fighter and in Street Fighter 6 there’s something for everyone. The game will feature modes from previous titles including – Arcade Mode, online matches, Training Mode, local versus battles, and more – all contained within Street Fighter 6’s Fighting Ground game mode. We’re also bringing two brand new modes called World Tour and Battle Hub to expand upon Street Fighter 6’s unbeatable gaming experience.

Modern Graphics with a Coat of Graffiti

We’re happy to announce that Street Fighter 6 is being developed on Capcom’s own RE Engine – previously used to create Resident Evil Village, Devil May Cry 5, and Monster Hunter: Rise. The RE Engine enables the development team to bring-to-life fine details like individual muscles tensing up, cinematic Super Arts, and special stage effects like cherry blossom petals twirling along with each character’s movement, all in an effort to enhance the gameplay experience like never before. Pair these enhancements with the splashes of paint and street aesthetic, and you get the distinct art style of Street Fighter 6. 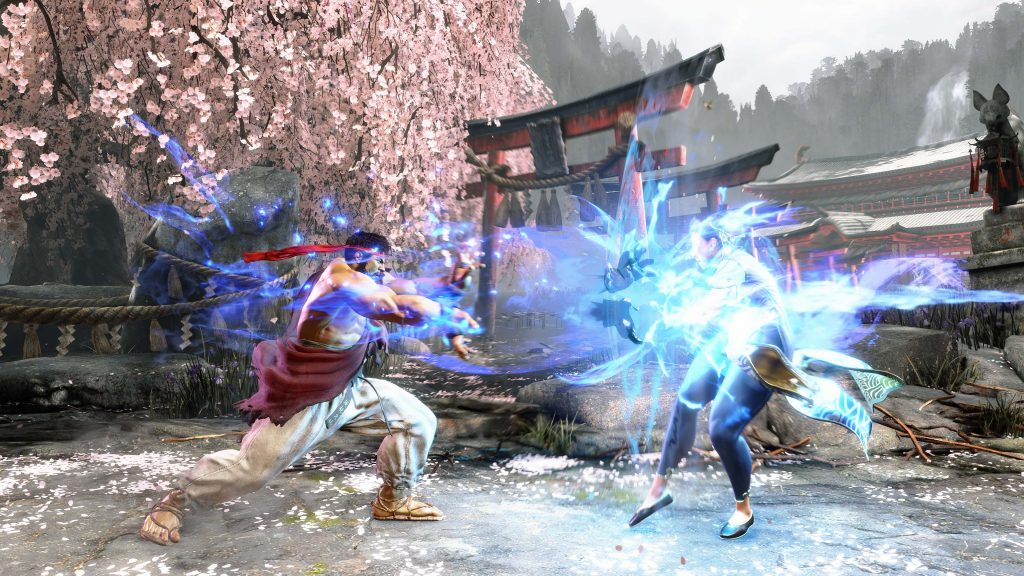 A Diverse Roster of Characters

Street Fighter 6 wouldn’t be Street Fighter without its iconic roster of characters. Returning to the fight are the legendary Ryu, Chun-Li, and Luke who have undergone slick new character designs dripping in style. The first new face to join the Street Fighter 6 roster of World Warriors is Jamie, a breakdancer with a unique move set featuring his ki-unleashing drink. 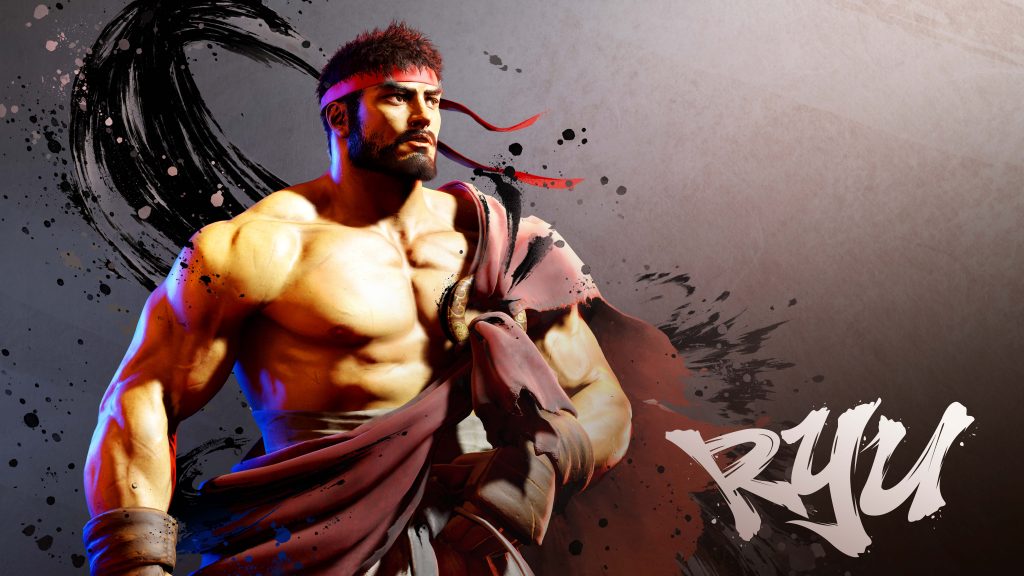 Ryu continues training on his endless quest to find true strength. Well-mannered and sincere, he travels the globe in search of worthy opponents. Having overcome the Satsui no Hado, he now yearns for something greater.

Ryu has new moves to reflect his growth over the years. He uses Hashogeki to concentrate his ki in his palms and unleashes it a short distance forward. It’s useful as a follow-up after block strings and combos. During Denjin Charge, Ryu envelops his fists with the Power of Nothingness, enhancing special moves such as Hadoken and Hashogeki. Ryu is vulnerable while performing this move, so careful timing is critical. 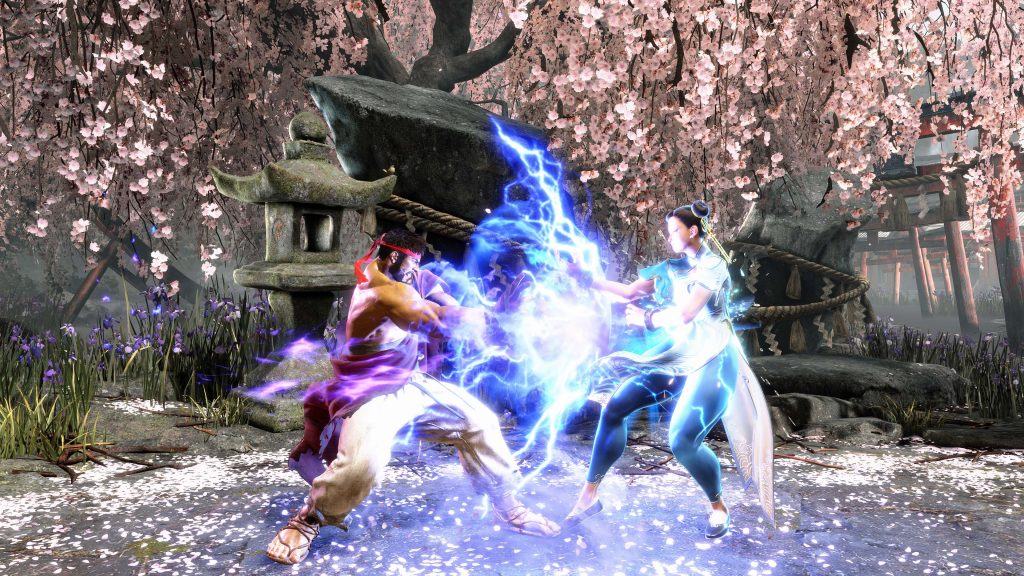 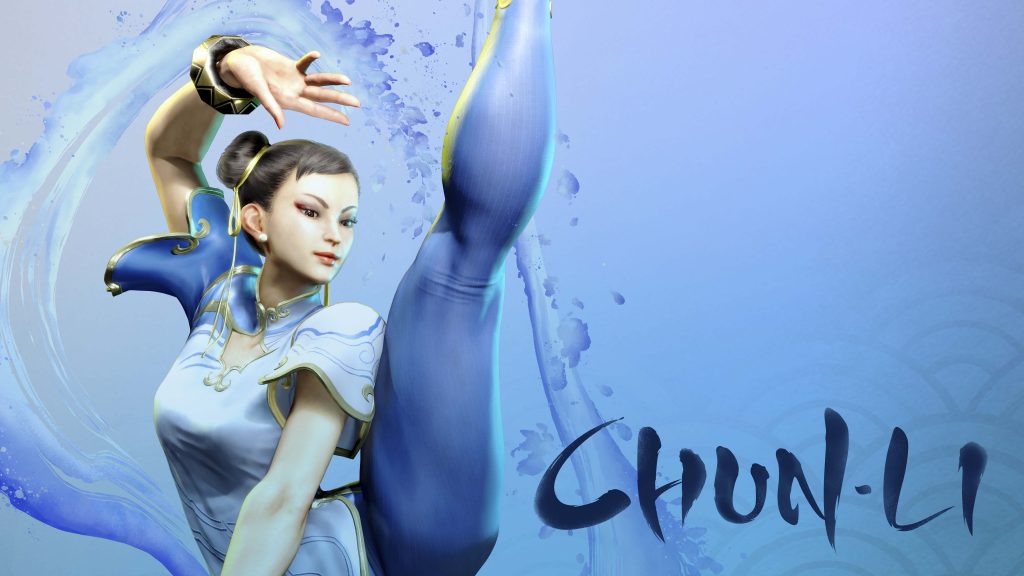 Chun-Li is a former agent from the ICPO (International Criminal Police Organization). She now looks after Li-Fen, a victim of the Black Moon Incident from Street Fighter V.  With Shadaloo now fallen, Chun-Li teaches kung fu classes and has become a beloved member of the local community.

Like the legend she is, Chun-Li also has new moves in Street Fighter 6. During Tensho Kicks, Chun-Li rises into the air with a flurry of kicks, which is useful for countering an opponent’s jump attack or to close out combos. She also has a new Unique Move called Serenity Stream, which sees her positioning herself close to the ground. During this stance, Chun-Li’s each normal attack button produces different attacks. 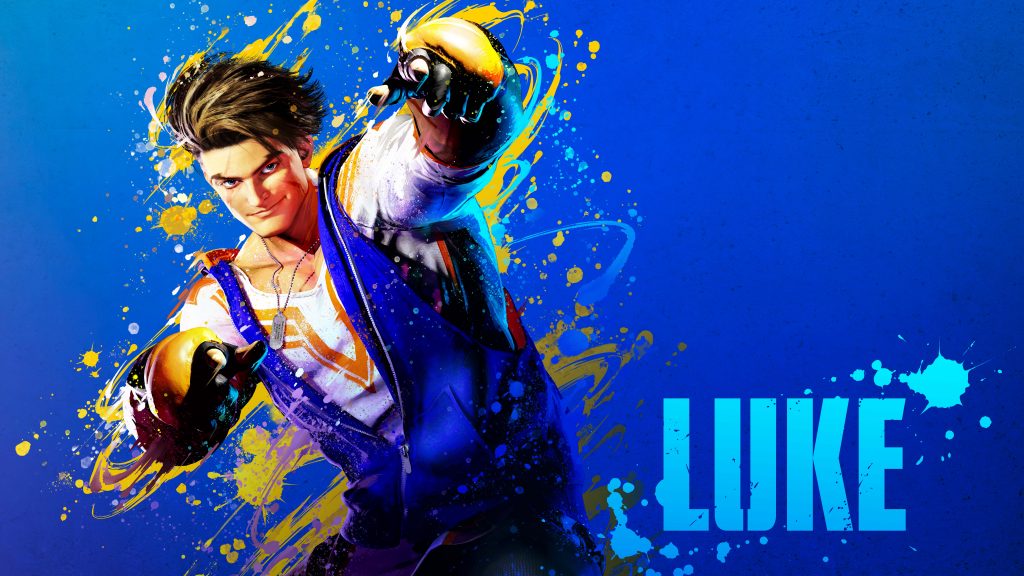 Luke uses his background as a contractor for a private military company to teach mixed martial arts. He spends his days off eating junk food, playing video games, and challenging opponents to a good old fight. Nevertheless, he always has victory in his sights.

Luke’s DDT is a powerful throw activated after the first hit of an Overdrive (OD) Flash Knuckle and is useful for dishing out extra damage. His Fatal Shot fires an additional shockwave after an OD Sand Blast to secure more damage after trading projectiles. 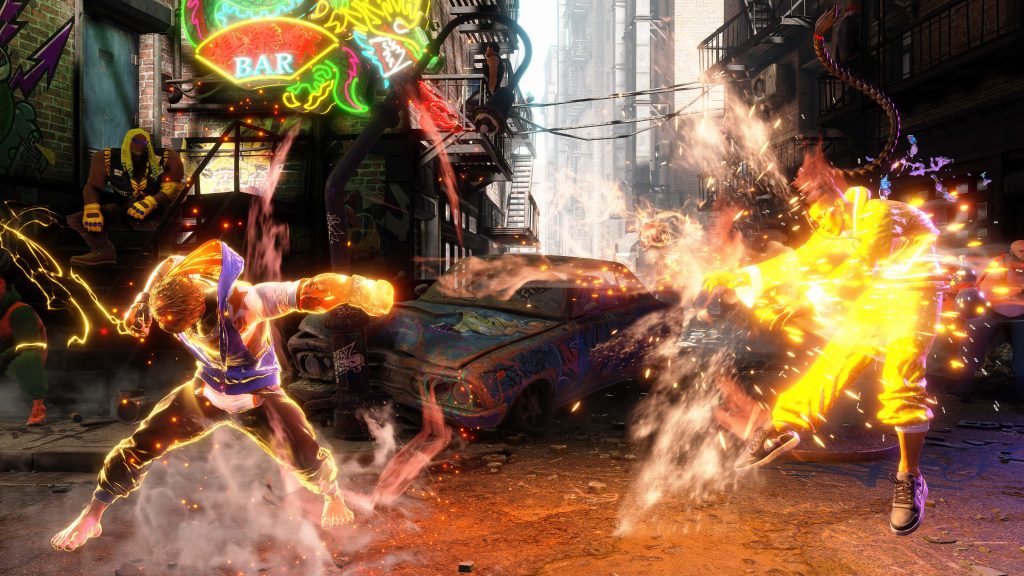 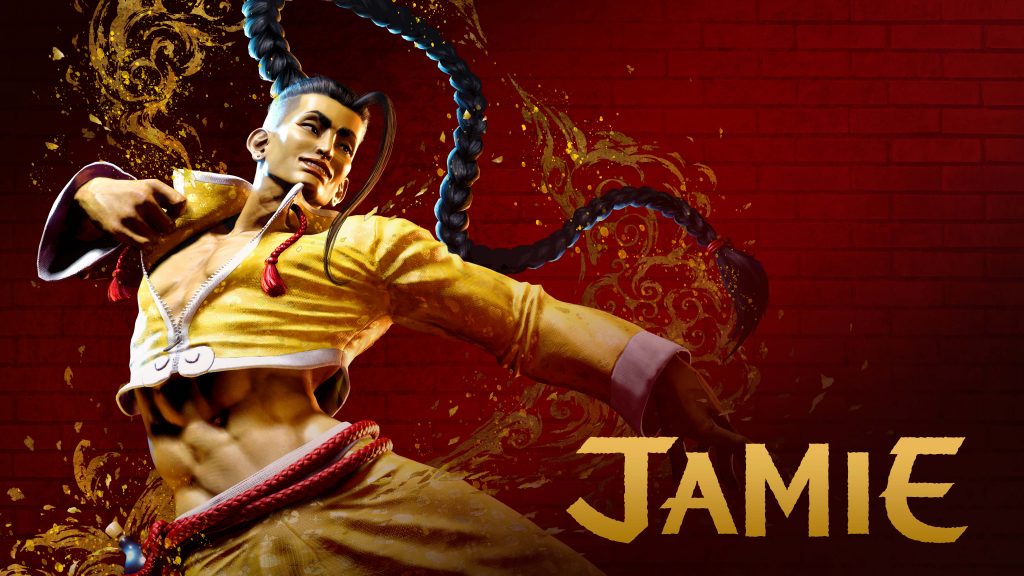 Jamie is a self-styled Chinatown peacekeeper who aspires to walk in the footsteps of Yun and Yang, the Twin Dragons. An expert dancer, Jamie places justice and friendship above all else, defending his town with martial arts.

The Devil Inside is Jamie’s signature move where he takes a swig out of his ki-unleashing drink to raise his Drink Level where higher levels unlock additional moves – and changes his appearance. Jamie can use Luminous Dive Kick at Drink Level 1+, where he extends his leg after a forward jump and quickly drops to the ground.  Another Special Move is Bakkai, which can be used at Drink Level 2+, where Jamie slides along the ground in a series of rotating, upside-down kicks. This move does heavy damage, and is useful when performing combos against opponents that have left themselves wide open. 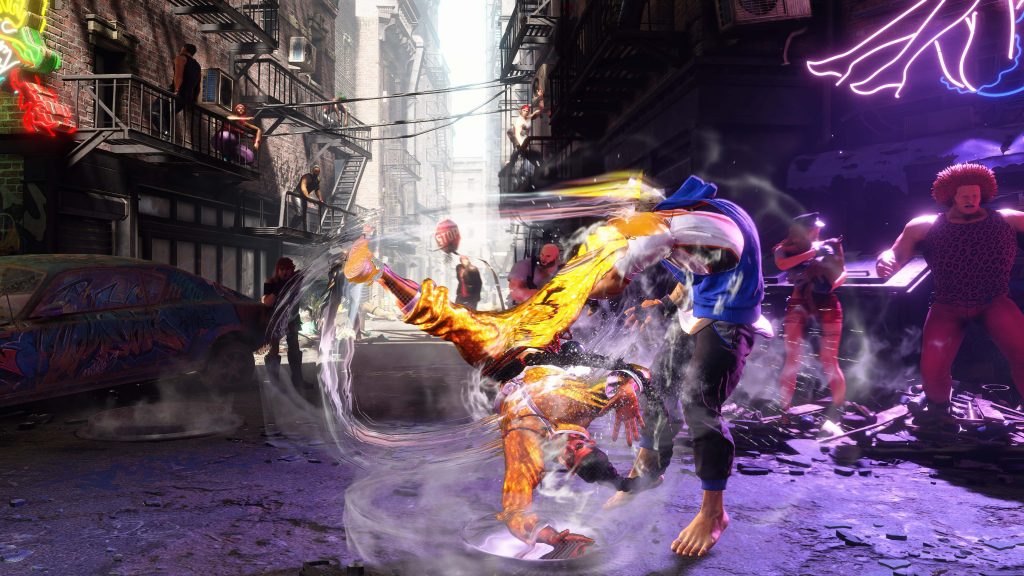 A Modern Control Type for Everyone

For those who are worried that fighting game inputs are too complicated, we would like to introduce you to Street Fighter 6’s Modern Control Type, where a special move can be performed by combining the “Special Move” button with one directional input. Furthermore, simple combos can be performed by holding down the “Assist” button and continuously pressing some of the attack buttons. Take a look at the chart below to see how much easier it is to perform your character’s flashiest attacks, including Drive System moves. As you can also see, the Classic Control Type is still available for more seasoned players. Feel free to switch between the two! 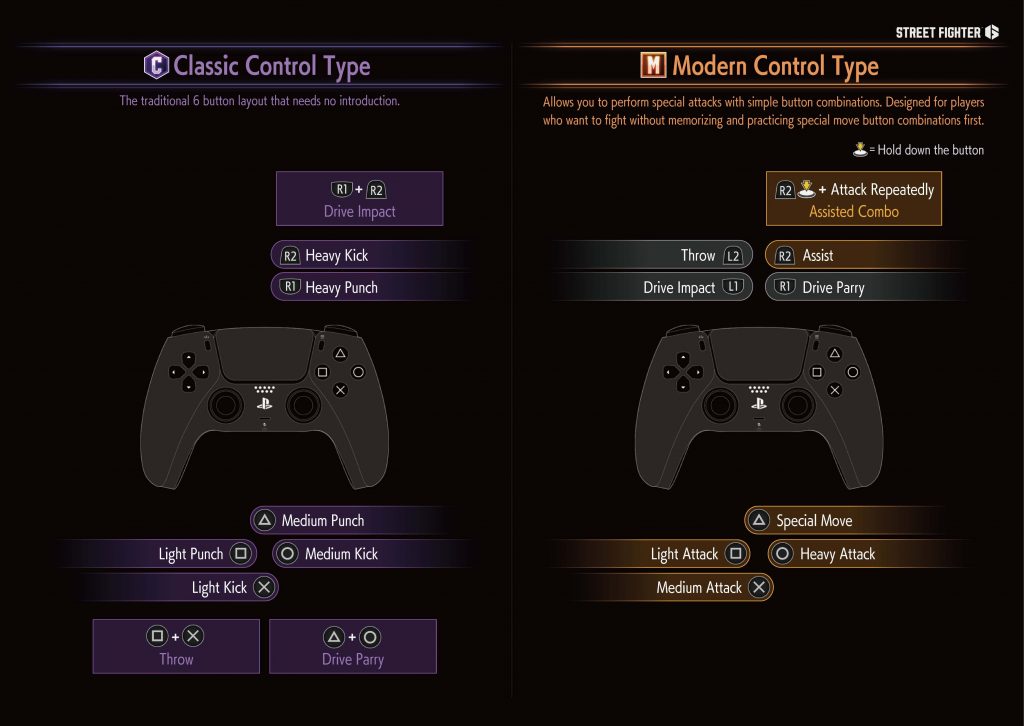 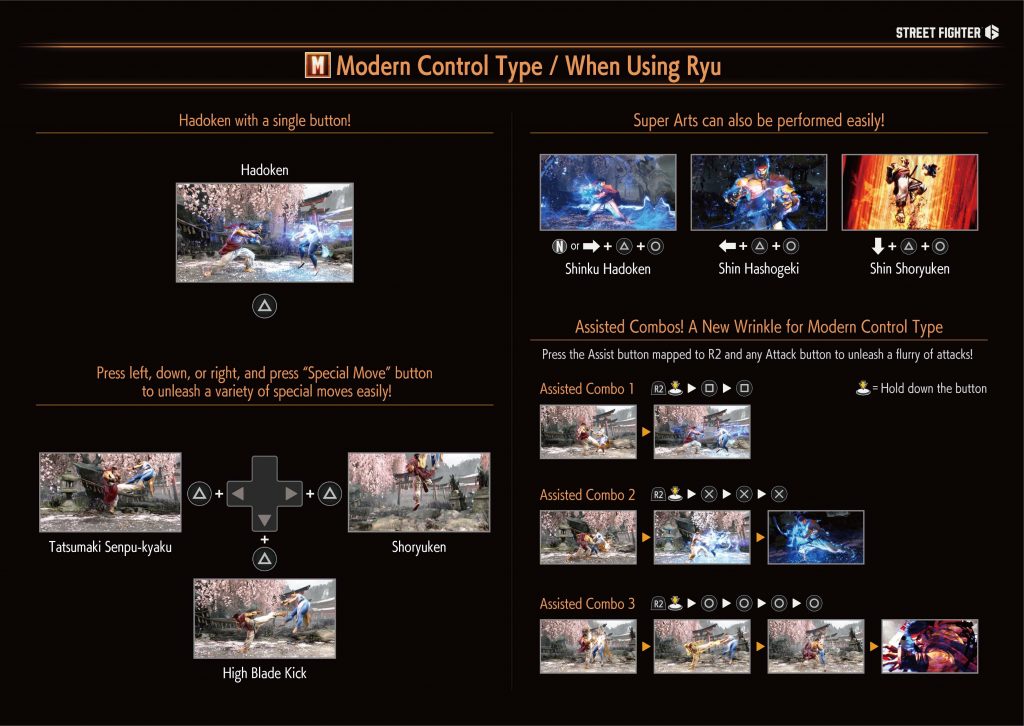 A Battle System Built for Creativity

Street Fighter 6 marks the debut of the new Drive System, which includes both new and familiar features that will test your creativity. The Drive System allows you to use five different techniques to enhance your offense and defense. Using these techniques will deplete the Drive Gauge, which consists of six Drive Stocks. Some techniques use more stocks than others. While the Drive Gauge does replenish over time, if you happen to run out, you’ll be temporarily put in a vulnerable state called Burnout. During Burnout, if your opponent hits you with Drive Impact in the corner of the stage and makes your back slam against the wall, you’ll be Stunned – that’s right Stun works differently in Street Fighter 6.

Take a look at the image below for a list of the five techniques, how many Drive Stocks they cost (or replenish), and the controls to activate them. 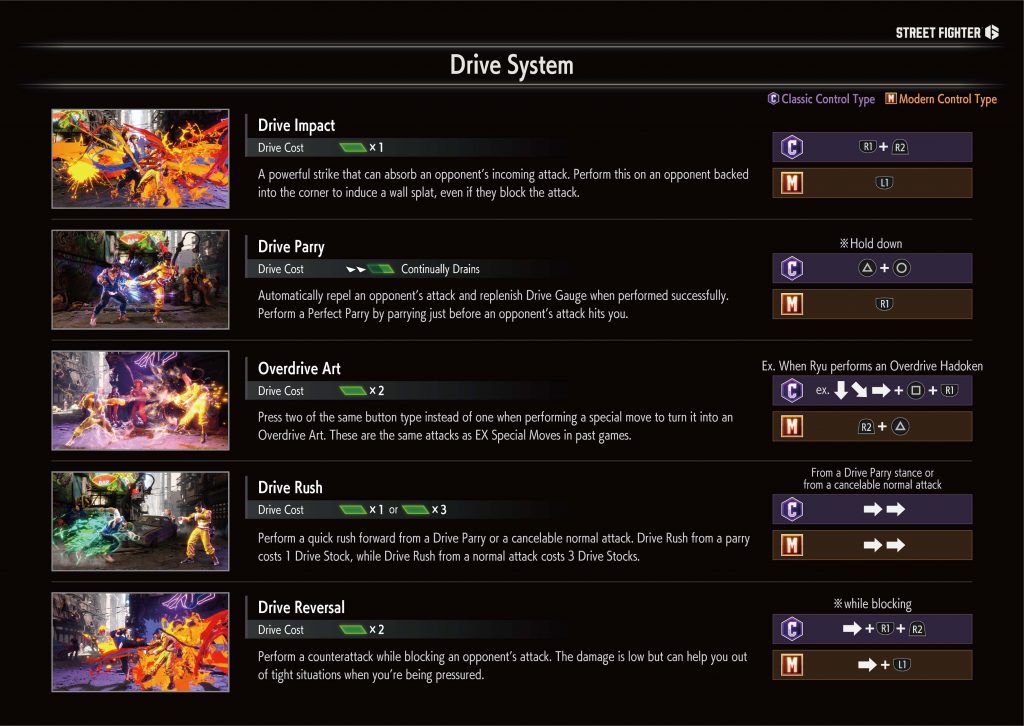 Let’s announce another new feature while we’re at it, the Real Time Commentary Feature. A few well-known Fighting Game Community (FGC) commentators and notable faces are lending their voices to be featured in Street Fighter 6. They will offer dynamic real-time commentary as your matches go on and provide easy-to-understand explanations about gameplay. The Real Time Commentary Feature will also support subtitles in 13 languages for more accessibility. The first commentators to hype up your matches are Jeremy “Vicious” Lopez and Aru! We’ll unveil more commentators at a later date.

Street Fighter 6 contains three foundational pillars, each with multiple features or additional modes under them. In Fighting Ground, you will get the classic (and upgraded) fighting game experience, complete with the core modes you expect. The other two pillars are exciting new additions to the series. World Tour is a single-player immersive story mode that pushes the boundaries of what a fighting game is and allows you to leave your own legacy within Street Fighter 6 with your player avatar. Battle Hub, which was briefly shown at the end of Announce Trailer, will also offer players new and unique ways to engage and communicate. Both World Tour and Battle Hub will require a deeper dive in the future, so keep an eye out! 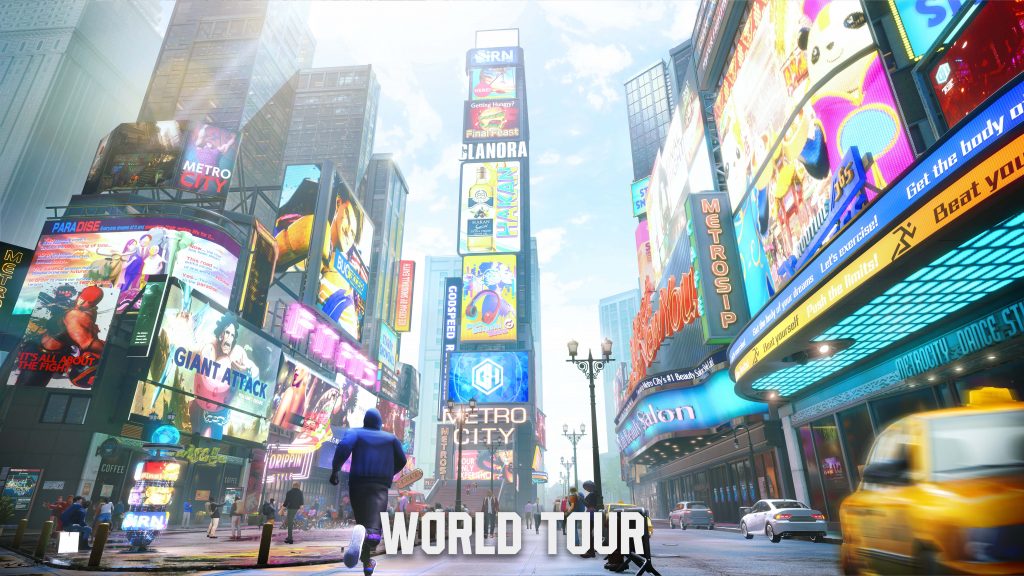 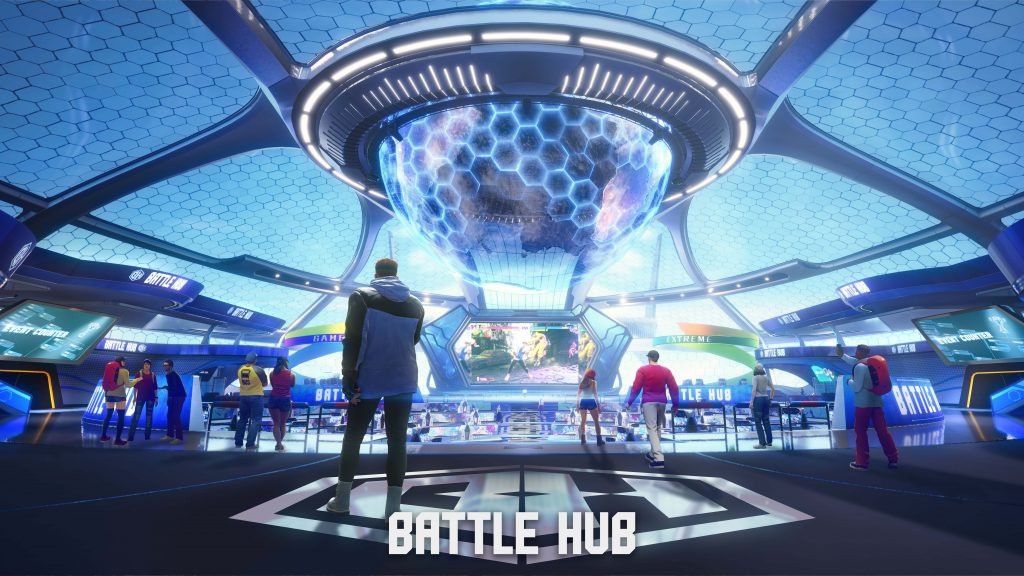 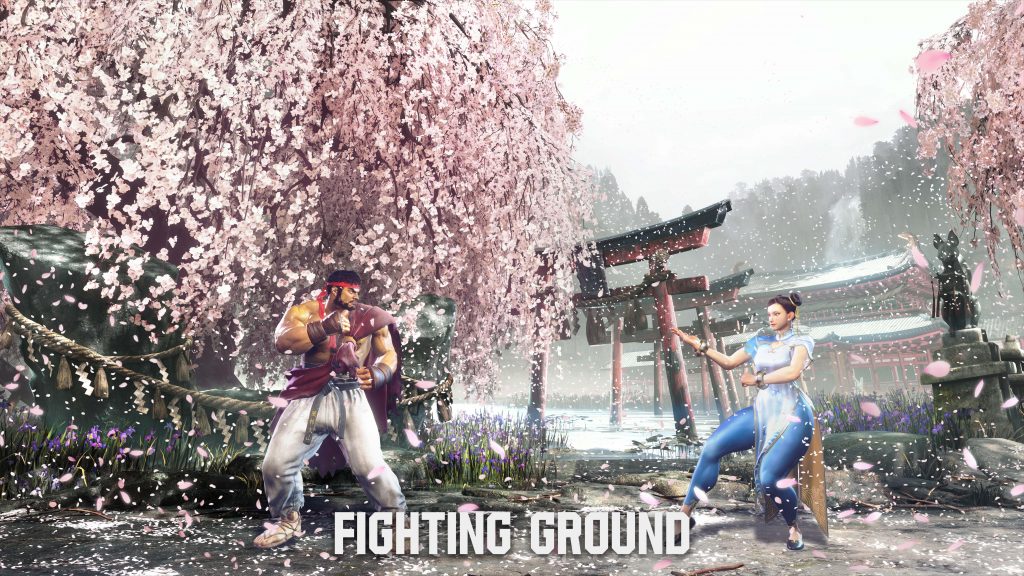 This isn’t only “Your Moment. Your Fight.” It’s your creativity, your ambition, your drive, and your legacy. We have so much more to share in the future leading up to release. Street Fighter 6 will be available in 2023 on PlayStation®5, PlayStation®4, Xbox Series X|S, and PC!