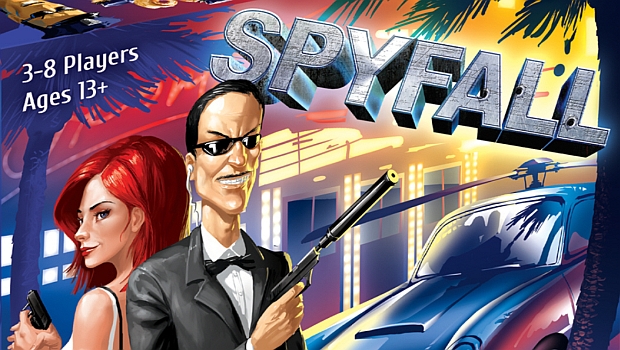 This sounds like a cool idea for a mildly intense party game or some lighter fare with fellow hobbyists. The idea of a Q&A game is not new, but blending it with elements of Scotland Yard and Clue is intriguing. Attaining the right balance of subtlety, so as not to give oneself away, while still participating fully in the festivities will require a cunning linguist indeed. Stir in a few cocktails and the game could be very challenging.

Cryptozoic Entertainment announces the release of the SPYFALL deduction card game June 10. SPYFALL is an easy-to-learn card game of bluffing, probing questions, clever answers and suspicion. At the start of each round, players receive a secret card informing them of the group’s location – a casino, space station, pirate ship, circus, (30 unique locations), except one player receives the SPY card instead of the location. The Spy doesn’t know where they are, but wins the round if they can figure it out before blowing their cover.

Once per round, each player may accuse another player of being the Spy. If all players agree, the game ends and that player’s secret card is flipped up. If the Spy is captured, each of the non-Spy players win the round. If a non-Spy is revealed, the Spy wins. Finally, if the Spy figures out where they are, they can reveal their card and make a guess. If they’re right, they win the round. If not, the non-Spy players win. The game is played over a series of rounds and points are awarded each round. A complete game is typically five rounds and the cards are randomly dealt each round. A player could even be the Spy two rounds in a row. After the last round, the player with the most points is the winner.

For more details about the game, please see the product page here.

The hype on Spyfall is high, and it sold out in the first day at Origins.  If you are interested in it, and can find it, you might want to pick it up right away.