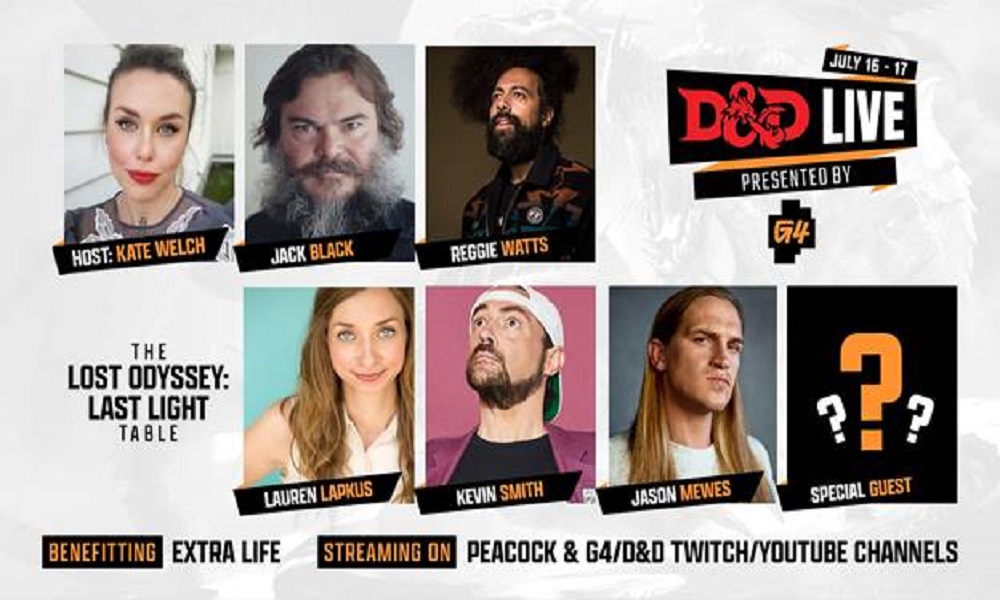 Today, G4 has announced that it will host D&D Live 2021 this year on July 16 and 17, featuring an all-star cast of guests including Jack Black, Kevin Smith, and Kate Welch. The event will be streamed on a variety of platforms, with new announcements and other fun tidbits to be had.

Dungeons & Dragons and G4 have assembled a studious and accomplished crew of adventurers to bring D&D Live 2021 to life on July 16 & 17. The two-day event will feature continuous entertainment designed for fans’ enjoyment including essential information on upcoming D&D storylines, Magic: The Gathering sets, and secret projects. Four two-hour D&D games will be presented and today D&D announced the lineup of one extremely consequential table G4 is dubbing Lost Odyssey: Last Light. Veteran daredevils known for perfecting the science of swashbuckling, Jack Black, Reggie Watts, Lauren Lapkus, Kevin Smith, and Jason Mewes will be led by stern Dungeon Master Kate Welch in a very serious investigation into dragons, krakens and sea giant queens. Another very special guest will be making an appearance and will be revealed closer to the event.

“Holy crap, are you sure you want to put these people around a D&D table with me? I’m pretty sure it’s going to be bedlam, but maybe that’s what D&D Live is all about,” said Kate Welch, perhaps remembering the Cast of Thrones table she presided over last year. “In all honesty, I’m honored to weave a tale for this group of incredibly funny folks. It’ll be a session you won’t forget!”

The players of the Lost Odyssey: Last Light table have chosen Extra Life as the charity they will be raising money for during the event. You can get the jump on the event and donate to their cause here.

In addition to the multitude of entertainment at D&D Live 2021, fans will receive more information on upcoming products from Wizards of the Coast. Interviews with the lead designers behind the annual D&D storyline The Wild Beyond the Witchlight, the D&D source book set in a Magic: The Gathering plane Strixhaven: A Curriculum of Chaos, and Magic’s Adventures in the Forgotten Realms set using D&D mechanics and monsters. There will be a few surprise announcements as well.

Go to G4TV.com/dndlive for more information on all of the programming coming during D&D Live 2021 on July 16 & 17.