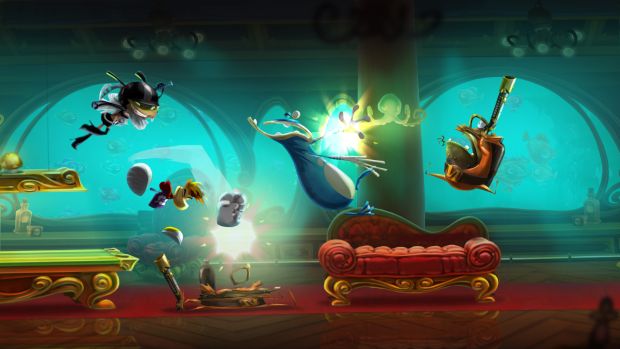 In some rather surprising, rare, and very welcome news, Ubisoft Montpellier today revealed via their blog that the Xbox One and PS4 versions of Rayman Legends will be releasing on February 18th in North America, and February 20th in Europe. This release date is earlier than when most people expected Rayman to land on next-gen store shelves. Rayman Legends was praised heavily for its outstanding visual design, so seeing it on these nice, shiny new consoles should be a treat for all eyeballs. In their blog post, Ubisoft stated…

On Xbox One and PlayStation 4, you’ll find new playable characters to unlock in the Heroes Gallery. On Xbox One, there are two characters directly inspired by Far Cry 3’s famous villain: Vaas! Ray Vass and Far Glob are two bizarre heroes dressed as this famous psychotic pirate. Also on Xbox One, players will have the opportunity to play Splinter Ray, a Sam Fisher-inspired hero.

On PS4, you’ll get to play Assassin Ray, a hero inspired by Edward Kenway from Assassin’s Creed IV Black Flag.

Something about playing as Edward Kenway in a Rayman world seems oddly horrifying. But you have my interest, Ubisoft!