Octopath Traveler is making its way to PC early next month, and Square Enix wanted to give players a chance to pre-order it early and receive a reward for doing so. Anyone that pre-orders the game on Steam will receive eleven desktop wallpapers featuring the heroes and stunning environments.

OCTOPATH TRAVELER for PC brings to life the game’s unique HD-2D visuals, blending striking 2D character designs with a beautiful 3D world. Featuring eight distinct characters, each with their own tales to enjoy ranging from journeys of self-discovery to quests for revenge, each hero will start their journey in a different land within the perilous continent of Orsterra, allowing players to steer their own journey depending on whom they choose.

Players who pre-order OCTOPATH TRAVELER ahead of its launch will receive an exclusive set of eleven desktop wallpapers, featuring beautiful artwork of the title’s beloved heroes and stunning environments. 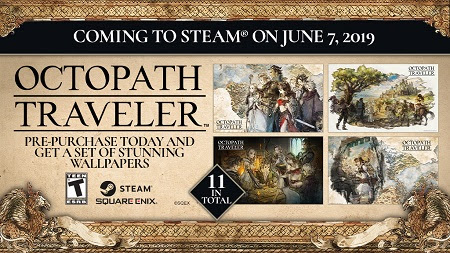 Octopath Traveler will be released on PC via Steam on June 7th, 2019. For more information on the game, visit the Steam page.