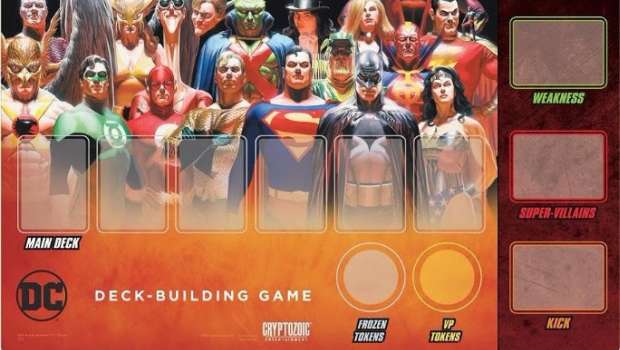 While some people use Dominion as their go-to for teaching deck building games, I go to the DC Deck Build Game when introducing the mechanic to new players.  The simplicity of each set makes it easy play, and the Super-Villain deck gives players an objective for building the deck.  With four base sets and several other expansions, it’s a huge hit.  Now Cryptozoic is expanding the game be introducing organized play for it.

Cryptozoic Entertainment, leading creator of board games, trading cards, and collectibles, and Warner Bros. Consumer Products, on behalf of DC Entertainment, today announced their plans to release the first DC Deck-Building Game Organized Play Kit. Designed for the popular DC Deck-Building Game series, the kit includes instructions for retail stores to run tournaments, as well as prizes for participants. Cryptozoic and Warner Bros. Consumer Products plan to release kits biannually, launching this premiere kit alongside the DC Deck-Building Game Multiverse Box this summer and the subsequent kit in the late fall or winter of 2017.

“Brick-and-mortar stores are not only the lifeblood of the game industry, but the reason the DC Deck-Building Game and all Cerberus Engine games have done so well for us,” said Dekan Wheeler, Marketing Manager of Cryptozoic. “We wanted to find a way not only to support our games better in retail stores, but to help those same locations host one-of-a-kind events for the diehard DC Deck-Building Game fans out there.”

The first DC Deck-Building Game Organized Play Kit will be sold exclusively to local game and hobby stores through PSI Distribution for $25. The instructions outline various options for tournaments (Single Elimination, Point-Based) and league play (Competitive League, Cooperative “Crisis” League). In addition, there are suggestions for how to configure tournaments depending on the number of players, spread the word about tournaments, and utilize the included limited-edition Playmat and 12 Vixen Super Hero Promo Cards as prizes. To help stores promote their organized play events, each kit also comes with a poster featuring DC’s Vixen that encourages players to sign up for an upcoming tournament.

Future kits will have similar content with a rotating roster of Promo Cards. The late 2017 kit will come with Black Lightning Promo Cards. Starting this year, players at Gen Con will have a chance to preview and win the following year’s DC Deck-Building Game Organized Play Kit Promo Cards before their wider release to stores via the kits.

This is a great way to introduce more gamers to the DC Deck Building Game.  Including instructions for different tournaments and promo cards and other items as tournament prizes should give it plenty of buzz.  Look for this at your local game store this summer.