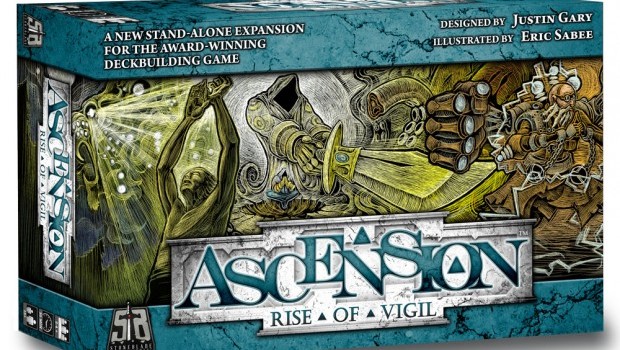 There are several deck-building games out there, but one of the ones I have enjoyed the most is Ascension.  Each expansion has been better than the last, and the iOS version is terrific. Now they have announced a brand new standalone expansion, Rise of Vigil.

Stone Blade Entertainment’s newest expansion, Ascension: Rise of Vigil, features an entirely new resource called Energy. Unlike the other resources in Ascension, Runes and Power, Energy is not spent to acquire or defeat cards.  Instead, select cards have Energize abilities that turn on when the player reaches a certain Energy threshold. In addition, Ascension: Rise of Vigil also introduces Treasure cards, which provide free bonuses to players when they acquire or defeat cards in the center row.

If you haven’t tried Ascension yet, then I would recommend taking a look at the iOS app.  If you would rather play face to face with someone, this might be a good time to start.  It is fast-paced and has plenty of depth to make each game play differently.  I know that I am curious to see how the Energy resource plays out, and I’m glad to see that it isn’t just used for dealing with cards in the center row.